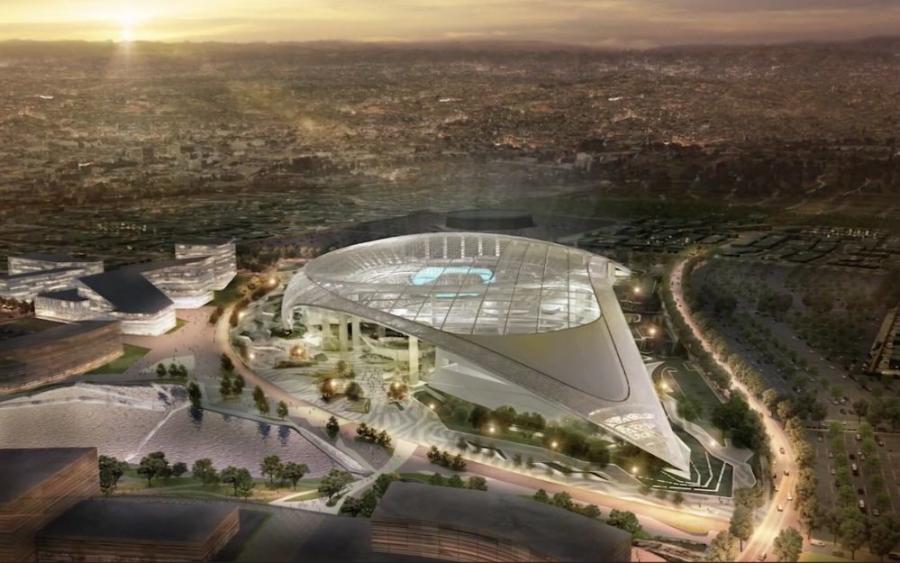 The stadium complex also will include a hotel, retail space, office space and a 6,000-seat entertainment venue.

INGLEWOOD, Calif. (AP) The Los Angeles Rams and Chargers have shown off their future new home rising from a very deep hole in suburban Inglewood.

The teams gave news media a hard-hat tour of the stadium construction site about 10 mi. (16 km) southwest of downtown Los Angeles and not far from the eastern approach to Los Angeles International Airport's two northern runways.

A massive amount of earth has been moved, foundational pillars are rising and some structures are beginning to take shape.

“We have completed the mass excavation, which is actually the digging of the hole, if you will, and we're bringing the buildings up out of the hole,” said Robert Aylesworth Jr., who is in charge of stadium construction.

That requires more equipment and manpower to be able to complete it in the same time frame, he said.

The $2.6 billion, 70,000-seat stadium was originally supposed to open for the 2019 NFL season but heavy rains last year delayed excavation and it's now expected to open in 2020.

“We're on target to open in 2020,” Aylesworth said, but added that the project faces competition for labor by the end of this year and 2019 as large projects open up at the airport and elsewhere in the greater Los Angeles area.

“So we're pushing hard right now in every way we can to get as much done, but typically the manpower at the end of the project increases pretty dramatically because you're doing things like painting, floor finishes, millwork and that kind of stuff and it just takes more people to do it,” he said.

In the meantime, the Rams will continue to play at historic Los Angeles Memorial Coliseum and the Chargers will remain at tiny StubHub Center in suburban Carson.

“This is gonna be a work in progress obviously but we're starting now for planning to be in here in 2020 and I think everybody is really excited about it,” said Chargers owner, Dean Spanos. “This is something that's global. It's world class. It's one of a kind. Something that all of Los Angeles and Inglewood is going to be very proud of.”

The stadium complex also will include a hotel, retail space, office space and a 6,000-seat entertainment venue.

The project backed by billionaire Rams owner Stan Kroenke was a prime factor in the league's decision to allow the Rams to move from St. Louis, returning the NFL to Los Angeles after a 21-year absence from the nation's second-largest market. The Chargers then exercised their opportunity to join the Rams in Los Angeles.