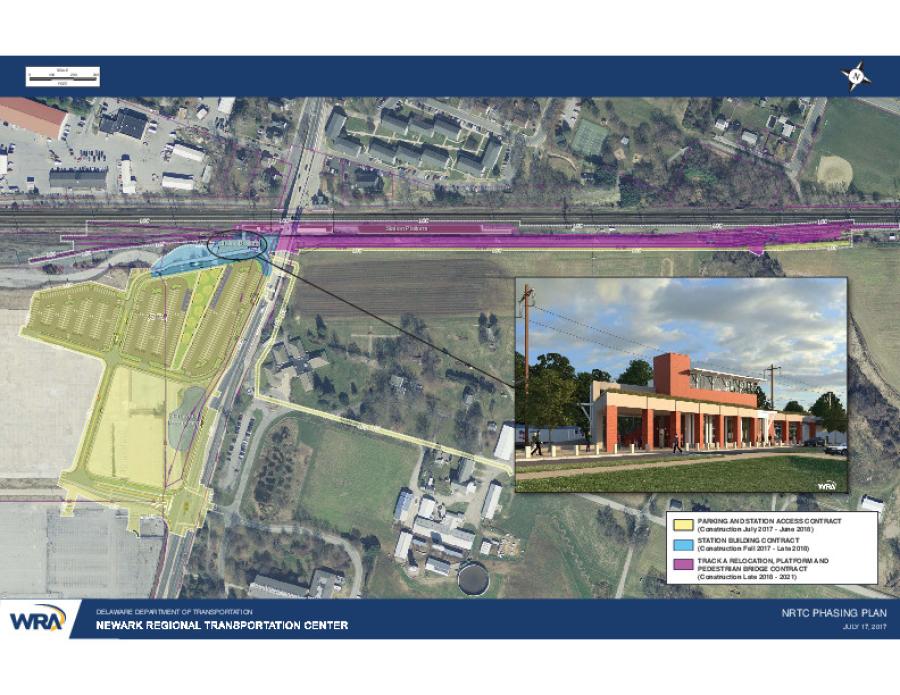 A more than $50 million project that's been years in the making is finally under way in Delaware. An improved Newark Rail Station is being constructed in the location of the existing SEPTA rail station, west of SR 896 in Newark.

“It cannot accommodate high-level platforms required by the Federal Railroad Administration [FRA] and the Americans with Disabilities Act [ADA]. The current rail configuration also limits opportunities to minimize conflicts with existing freight rail and to increase passenger rail service to and from Newark, whether it's via Amtrak, SEPTA or even the extension of MARC [Maryland Area Regional Commuter] service from Maryland.”

In July, state officials broke ground on the first phase of upgrades to the train station. The transportation improvements, collectively called the Newark Regional Transportation Center (NRTC), include construction of a high- level island platform to provide full ADA access for all train users, and a roughly 2,000 sq.-ft. train station building to provide users a waiting area, ticketing and bathrooms. The work also includes a walkway overpass to provide access between the station building and island platform, with stairs and elevators.

In addition, crews will build a more than 450-space parking lot, including spaces for electric vehicle charging, and bus staging and access, and also will provide new access roads and an improved intersection with South College Avenue.

Other projects call for construction of additional pedestrian and bicycle facilities and connections and the reconstruction and realignment of rail tracks near the train station along Amtrak's North East Corridor (NEC). The University of Delaware also is redeveloping the site of a former automotive assembly plant next to the station, creating a great opportunity for transit-oriented development and integration with the improvements proposed for the NRTC.

The work is being performed in phases to accelerate portions of the construction to align with funding deadlines. Phasing for the project can provide more opportunities for completion among interested contractors.

Planning began in 2004, when the Wilmington to Newark Rail Commuter Improvements Study was undertaken to develop a comprehensive program to upgrade the Newark Station as part of a larger study that would provide better commuter rail service for the state of Delaware.

“The result of that study was a new station to be relocated approximately one mile north along the NEC corridor from the existing site,” said Tudor. “At that time, the Chrysler assembly plant was in full operation, and there was no space at the Newark Station for expansion of facilities. This was not the most popular option for Newark residents, as the new site had accessibility concerns, but no better option was feasible.”

The state began to move forward with design concepts shortly after the study was completed in 2005; however, in 2009, the Chrysler plant ceased operation and the site was purchased by the University of Delaware to be its new Science, Technology and Advanced Research (STAR) Campus, and it identified the need for transit access to make the campus more walkable and better connected to other research institutions along the NEC.

“The Wilmington Area Planning Council [WILMAPCO] convened an agency working group to conduct a feasibility study to determine if the Newark Station could be expanded and improved at the existing site with additional adjacent land that would be made available by the university. The results were positive, and led to the first TIGER grant award to begin environmental and design work for the NRTC, which would be located at the existing station site.”

The total anticipated cost of the NRTC is broken into multiple construction contracts and Amtrak work to be performed over many years. The first construction contract, which is currently active and includes building the parking lot and access improvements, has a contract award price of $4.8 million.

The overall project is partially funded by a Federal Transit Administration TIGER grant of $10 million. Funding also is coming from other project partners, including the state of Delaware Transportation Trust Fund, the University of Delaware, the city of Newark, WILMAPCO, New Castle County and other federal funding resources.

“As part of the FTA Grant process, future ridership projections were developed to understand potential ridership demand and parking needs,” said Tudor. “Research was done to understand the design requirements for the project partners and stakeholders as part of any potential upgrades associated with the NRTC.”

The design incorporated the needs of several project partners and parties, including the University of Delaware, Delaware Transit Corporation, Amtrak, SEPTA and Norfolk Southern Railroad. Regular calls and meetings among key partners have been essential to the project's success.

“It's very rewarding to see the contract in construction after several years of planning and design, knowing that these transit improvements can be the seed for additional investments by the private sector to provide redevelopment that can better support increased transit usage, walking and biking,” said Tudor. “The construction project is being carried out in cooperation and coordination with Amtrak as it looks to upgrade and modernize its rail facilities in the project area, and in other areas along the NEC.

“While some rail improvements are needed to make this project functionally complete, Amtrak is providing additional investment, including the reconstruction of turnouts, crossovers and the widening the space between adjacent tracks, to best address safety and operations in the area,” said Tudor.

The reconstruction of the South College Avenue intersection and addition of parking facilities will require grading and paving of new internal roadways and parking surfaces. In order to facilitate this work, the contract also calls for the installation of drainage systems, stormwater management facilities, lighting, traffic signal work and utility relocations.

Crews are clearing the site, relocating utility poles and a water line to accommodate the future alignment of relocated railroad track and removing the existing roadway medians to facilitate the maintenance of traffic within the site during construction.

“The site was once an automotive assembly plant, which required dedicated electric transmission lines,” said Tudor. “These lines had been deactivated when the plant ceased operation. The poles must be removed, because they are located in areas that will be occupied by the reconfigured parking lots and relocated railroad tracks. The remaining electric distribution lines that were carried on those poles will be shifted to a relocated wooden pole line, south of the relocated railroad tracks.”

Coordination with the city of Newark, the University of Delaware, Amtrak, Norfolk Southern RR and the other construction projects on the University's STAR campus have and will continue to be a challenge for the project. The first phase of the contract, which involves the parking lot and access road, began in early August 2017.

The first phase is expected to be completed in the summer of 2018. Other phases of the contract, including the station building, platform and railroad track relocations will continue through 2021.

The elements have not been a factor, to date. The contract time includes an allowance for 60 weather days. The site conditions consisted of an existing park lot and a level dirt field, which was previously the location of the old automotive plant building.

The contract calls for 14,800 cu. yds. of material to be moved during construction. The project requires a variety of equipment, including a large excavator and 10-wheel dump trucks to remove excavated material, a front-end loader, a paver and roller for hot mix paving and a backhoe for small areas of excavation. Asphalt and concrete are among the materials that will be used.

The effect the work will have on traffic in the area will be minimal, with lane closures occurring between the hours of 9:00 a.m. to 3:00 p.m. Significant improvements for ADA will be accomplished to the parking lot and access. There also will be dedicated spaces for electric vehicle charging stations.

“The new station building will provide amenities to rail users not currently available, including a waiting area, bathrooms and ticketing,” said Tudor. “Stairs and an elevator will be constructed to provide the connection to the future pedestrian overpass to the new platform. The future construction of the new platform and the pedestrian overpass will be the most challenging aspects of the construction project, because they will be located within the NEC. Work within the NEC needs to address significant issues to ensure worker safety and coordination with train schedules, and can be complicated and not very efficient for some construction activities.”

The project is intended to be the first phase of additional potential improvements to the new station. Possible future phases would provide additional upgrades to further enhance and expand passenger rail service, including MARC Service.