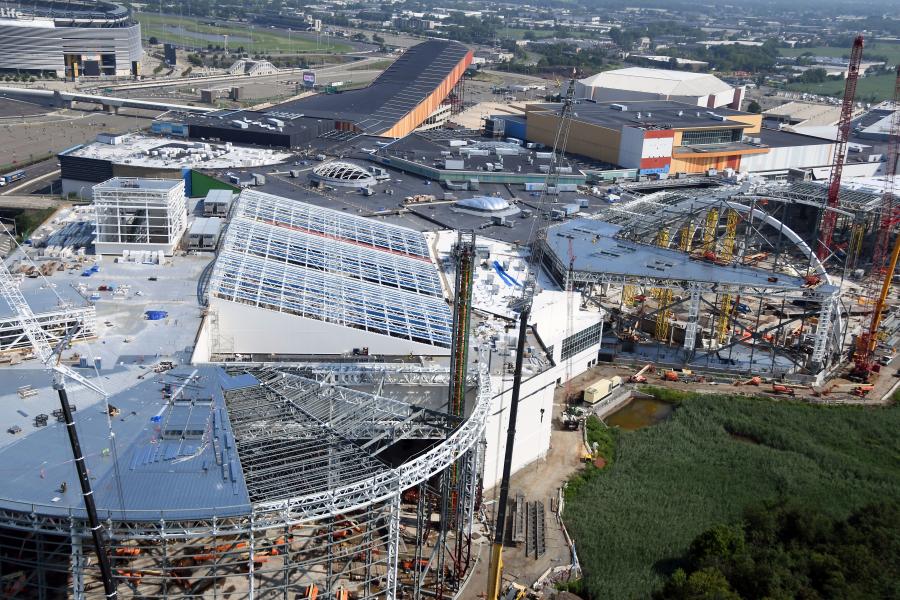 Having experienced its own roller coaster ride of sorts, American Dream — now being developed by Triple Five — will reportedly generate more than 23,000 jobs during the construction phase. (PCL Construction photo)

Promising to redefine the entertainment, leisure and shopping experience, American Dream Meadowlands may soon become a reality in East Rutherford, N.J. The $5 billion development, which has been in the works for years, is located at the site of the ill-fated "Xanadu" project, which became a source of ridicule by politicians and the public when it ultimately flopped. Despite major delays and a string of unsuccessful developers, promoters insist there's a market for the rescued mega-mall.

"We feel strongly that the region is vastly underserved for this type of project," said American Dream spokesperson Lincoln Palsgrove. "Our unique blend of entertainment and retail, wellness, lifestyle and shopping will draw visitors from around the globe. Additionally, there are many families living in the Northeast seeking a go-to entertainment, culinary, wellness, shopping destination open 365 days a year in their backyard. American Dream will be a place you can spend several days exploring all of the attractions and shops."

According to Palsgrove, New Jersey's proximity to airports, rail and bus routes makes it a good fit for the project, which appears to have made significant progress. When it opens its doors, American Dream will feature a Nickelodeon Universe theme park; DreamWorks water park; live-performance theatre: a ferris wheel; ice rink; world-class retailers; and a mix of restaurants, specialty shops and a spectacular roller coaster.

"The Euro-Fighter is a popular steel roller coaster design built by Gerstlauer," said Palsgrove. "The steepest Euro-Fighter to date will be the American Dream Launch Coaster. The main characteristic of the model line is its ‘beyond vertical' drop. Also, the lift hill is vertical and precedes the drop, forming a tower which is easily recognizable. The Euro-Fighter features a wide variety of inversions, such as the vertical loop, cobra roll and heartline roll." 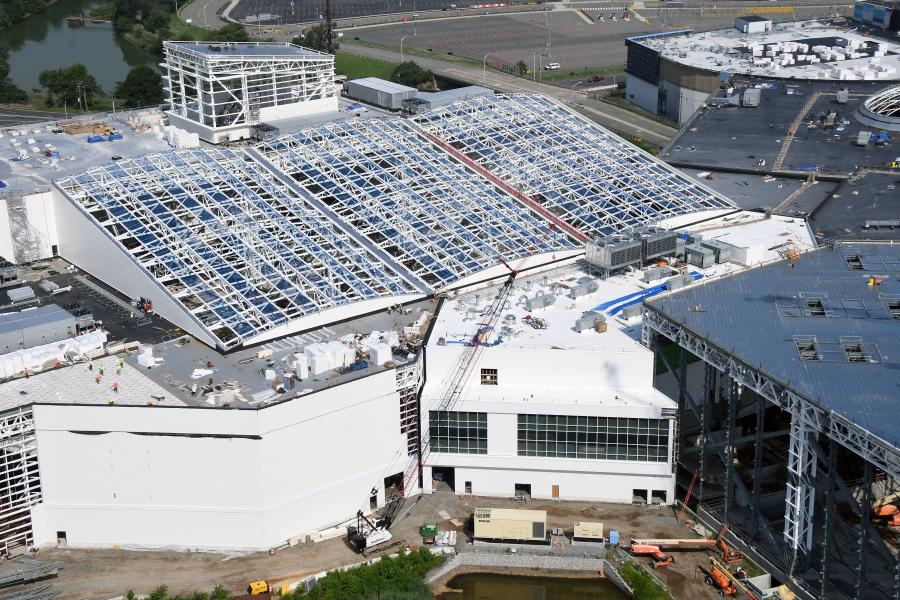 Having experienced its own roller coaster ride of sorts, American Dream — now being developed by Triple Five — will reportedly generate more than 23,000 jobs during the construction phase. Once complete, it's expected to create more than 16,000 permanent new jobs on site, and more than 6,700 jobs in the surrounding communities, totaling over $1.2 billion in annual compensation. Triple Five has completed more than $2 billion of new construction to date, with the project scheduled for a 2019 grand opening.

"On behalf of Triple Five, we'd like to thank Governor Murphy, our local and statewide representatives, and the Bergen County Building and Construction Trades for their exceptional hard work, dedication and commitment to the project," said Don Ghermezian, president of Triple Five, which also owns and operates Mall of America in Minnesota and West Edmonton Mall in Canada, North America's two largest retail and entertainment complexes. "This unprecedented project will create tens of thousands of jobs, bring millions of tourists and billions of dollars in economic growth annually to Bergen County and the State of New Jersey, and would simply not be possible without the incredible contributions and effort of these men and women."

Gov. Murphy visited with construction workers at the three million sq. ft. complex. He expressed his appreciation to the building team for their contributions to the growth and expansion of New Jersey's economy.

"Our goal is to create good, new, sustainable jobs that can support a family and help them secure their place in New Jersey's middle class. A complex project like American Dream creates many jobs in many areas — long-term jobs that provide families with the opportunity to gain their own foothold in the economy and help it grow. Every group affiliated with this project can be proud of the part they have played in the reformation and rise of this vital economic investment in the Garden State."

Prior to Triple Five initiating work on site, the existing facility was approximately 95 percent complete. Areas outside the facility were undisturbed marshlands, covered in vegetation, primarily fragmities / bullrushes. The existing Xanadu facility was stripped of all finishes and non-compatible building systems. Significant demolition also was required to facilitate increased structural capacity for new programming, addition of new skylights and tie-ins of the new expansion and attractions.

The project has faced several major challenges during construction, including sheer size.

The site offered poor soil conditions, is heavily influenced by tidal forces and has a long history of contamination.

"These items were major factors during design development, construction planning and equipment selection. No significant loading could be supported by the existing ground conditions without additional support or distribution. The site is heavily piled to support the facility — even the access ring road includes piles in its design. All construction loading requirements and equipment plans needed to be integrated into the building foundations," said Campbell.

Reworking the existing facility was another obstacle. 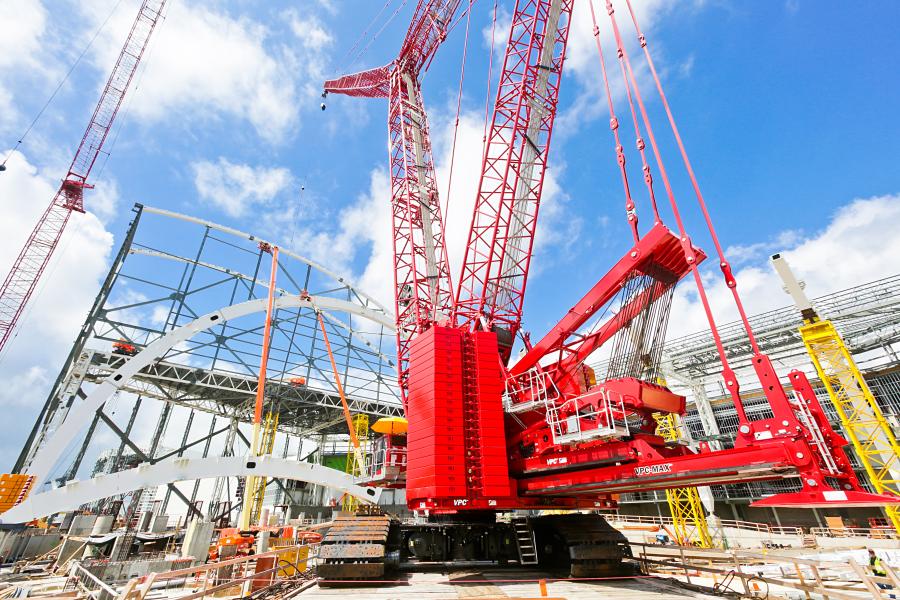 "American Dream incorporates and substantially renovates the original facility constructed on site. Implementing new structural changes, modifying design intent to adjust to the existing facility and addressing numerous code updates have added a layer of complexity to the overall project."

Tasks already finished include the realignment of existing roadway systems to new orientations, excavation, foundations and underground utility work, as well as demolition of all components of the existing facility not required as part of American Dream, or requiring modification to suit new design. Workers also have marked completion of separate anchor tenant spaces as additions to the facility, along with structural steel and concrete, skylight systems for Building B and Collections roofing.

Campbell said outdoor conditions have been an issue from time to time.

"Heavy snow and rainfall events between February and April 2018 caused numerous disruptions and required makeup work. During erection of major structural steel elements, heavy winds caused disruptions to some of the major lifts, as they were very sensitive to wind speed thresholds."

The project calls for moving 523,000 cu. yds. of dirt, in total. Site excavation has been a fairly standard process.

"There have been two unique features when addressing the excavation work on site," said Campbell. "The first is the level of contamination of the existing soil, with essentially all material excavated needing to be treated as contamination. This has limited the amount of material that could be removed from site, and required some creative thinking to address how to remediate and reuse as much of the material as possible.

"The second component was the work sequence. With the swampy nature of the site and poor quality of the soil, extensive prep work and matting was required to create the base from which all piling activities could be complete. All piling work was completed in advance of bulk excavation. Concrete mud mats were used to cap excavated areas, while creating a clean base to start concrete foundation and waterproofing to work from."

Campbell noted that the water park construction is characterized by the multiple levels of pools systems, piping, drainage and controls required for the pool and slide systems. 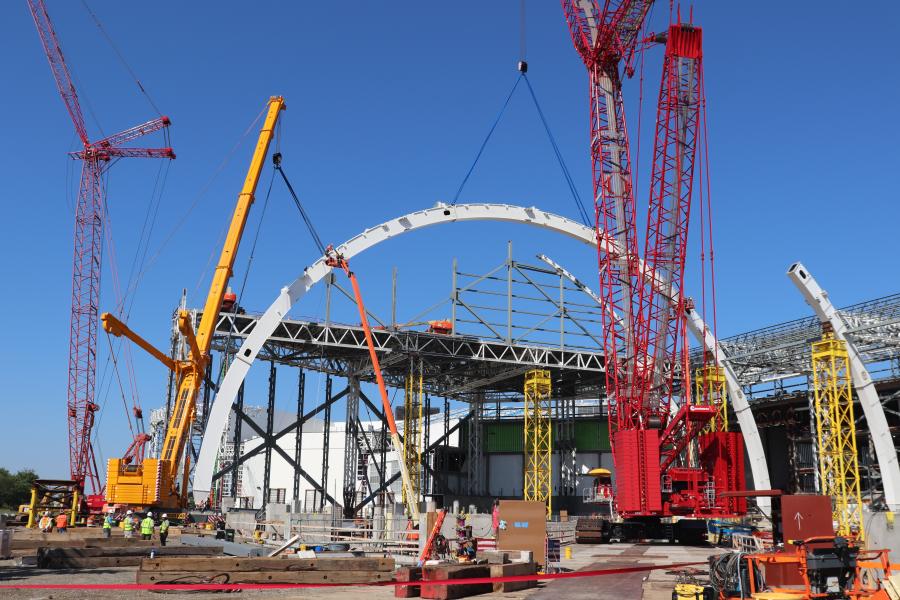 "There is a very specific sequence of construction, testing and quality control required to ensure all systems are installed correctly. Layer upon layer of pool systems are installed, tested and encased in lightweight concrete. Once this is complete, the final pool decks, pool finishes and slides can be installed. The unique structural system for the American Dream water park creates huge clear spans through the use of large box girder arches. Each completed arch weighs approximately 200 tons and spans 265 feet from base to base, with a height of approximately 140 feet tall. To install the arches, a specialized crane and support system was required."

To accelerate the schedule of the amusement park, a modular approach was used.

"A site fabrication yard was used to assemble all of the box truss structural components, install duct work and mechanical systems and finish paint prior to transporting the completed modular component to the amusement park site for final erection. Even with a substantial quantity of work built into the structure, there remained significant work to be completed at 80 to 100 feet in the air above the main floor."

Key pieces of equipment used beyond standard excavation and piling equipment have included multiple cranes, in all shapes and sizes.

"The poor soil conditions have required that all manner of cranes and hoists be planned well in advance, to ensure suitable structural capacity is in place to support them," said Campbell. "The project has had as many as 20 major pieces of crane equipment on site at one time. The new build was supported by seven tower cranes. Numerous models of crawler and mobile cranes are in use. The largest is being used in the water park and features a unique rail support system. We also have addressed a few unique scenarios by temporarily mounting cranes on top of areas of the constructed facility."

With substantial quantities of work at heights more than 80 ft. throughout many areas of the facility, the project has made extensive use of maximum reach lifts to safely position workers where they need to be.

"This was most prominently featured in the amusement park, where as many as 28 individual high capacity lifts were in use at the same time. During the completion phase of the project and for maintenance, a number of unique and highly flexible lifts will be needed to fit into the completed spaces, while still reaching areas that need to be reached." 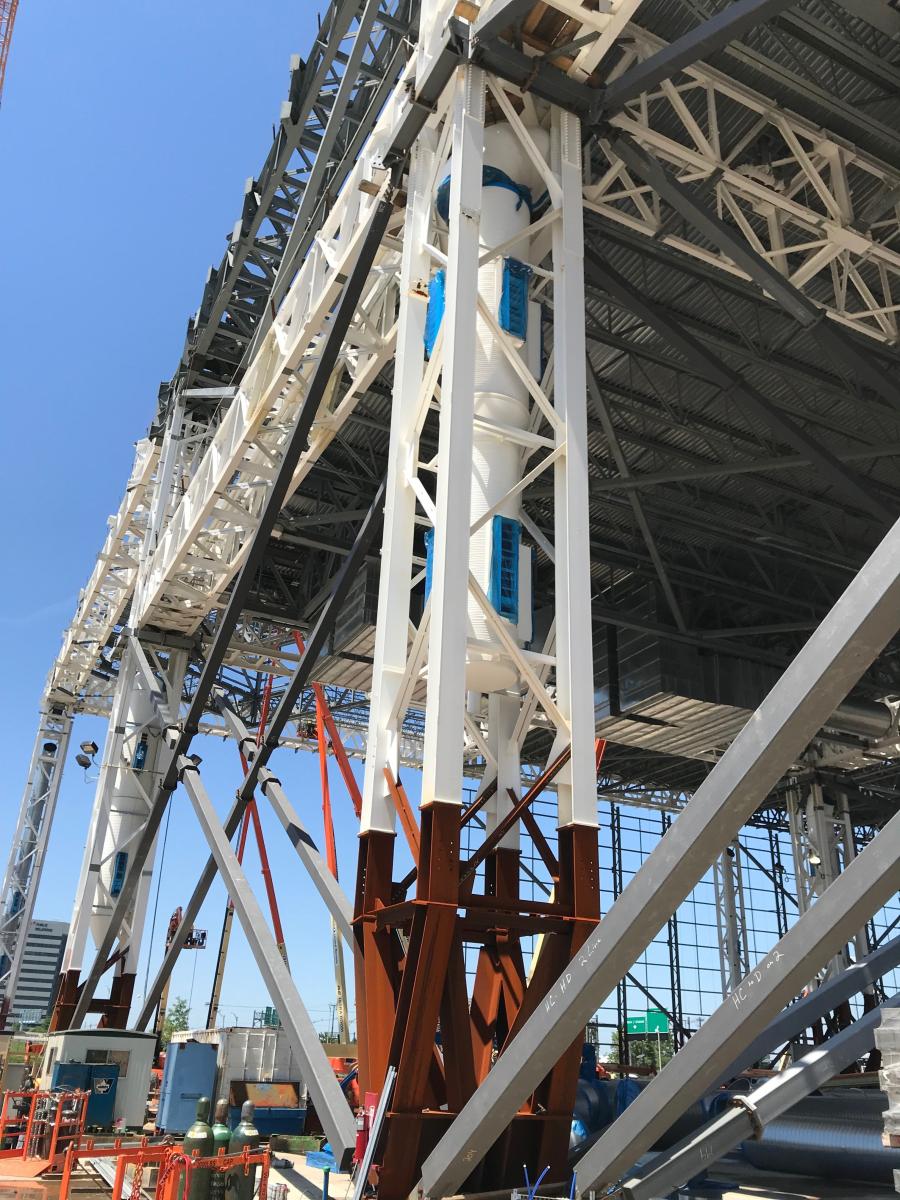 Materials required to complete the work include concrete, steel, glass, stone tile and drywall. The steel structure is unique because of the large open areas being created and the non-standard geometry of many of the spaces. This has generated some interesting pieces and connections in terms of size, shape and weight.

"Another product being used in numerous locations that's gaining prominence in North America is ETFE roofing. This is an inflatable plastic pillow system used in lieu of glazing. It's lightweight, durable and requires minimal maintenance. It proved to be a perfect solution to maximizing natural light into areas of the facility, without overtaxing the foundations with additional weight."

The most time-consuming part of the work has been the fabrication and erection of structural steel. The steel package is in excess of 26,000 tons, and is non-repetitive, for the most part. The sheer quantity of unique pieces and connections combined with the size, spans and weights of the structure has taken years of planning and hard work to complete.

Upon opening, American Dream is projected to generate more than 40 million visits annually, drawing from a population of more than 19.5 million residents within a 50-mi. radius and a tourism base of more than 65 million visitors that travel to the New York City Metropolitan area annually.