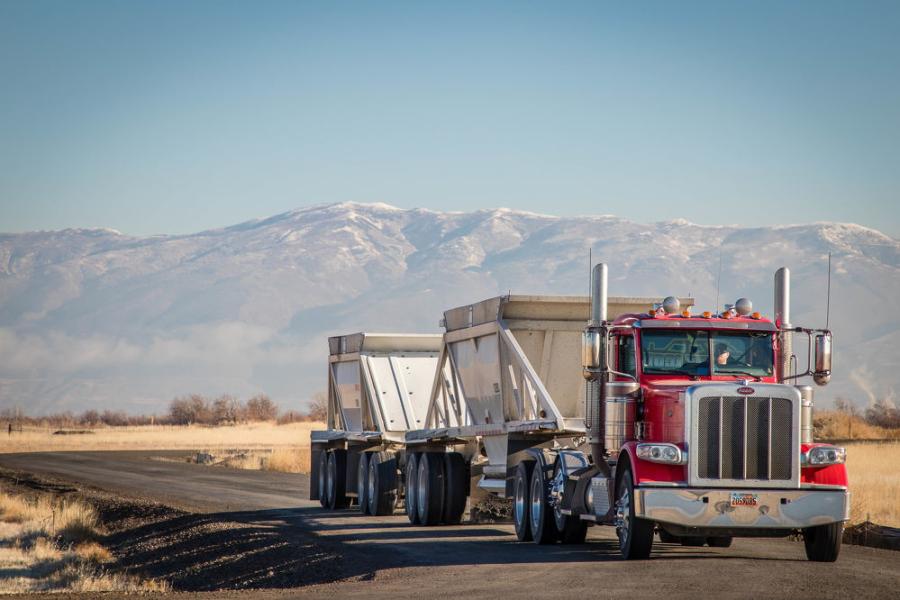 The initial site work will involve an average of 30 double-belly dump and 15 truck and pups hauling an average of 9,000 tons of AIA fill material and 4,000 tons of gravel a day for approximately four months to place the initial fill for the project. (Jake Njord photo)

Designed to help inmates successfully re-enter the community, a multi-million dollar prison under construction in Salt Lake City, Utah, will provide an environment aimed at reducing the state's incarceration levels. Upon completion of the project in 2021, prisoners at the current lockup in Draper will be transferred to the new Utah State Correctional Facility, located less than 30 mi. away.

“We are very excited to see progress,” said Jerry Jensen, a member of the Utah Department of Corrections facilities/transition team. “We have worked very hard on the planning, site selection and design, which has more open space, natural light and provides for the normalized environment we are seeking to aid in the rehabilitative aspects of corrections. It also allows for direct supervision, safer offender movements and adds numerous operational efficiencies.”

In March 2017, the state legislature authorized $100 million to be spent on infrastructure, bringing the total project cost to $692 million. In August, dignitaries officially broke ground on the 3,600-bed structure, following years of discussions and initial public outcry over the location.

“Ultimately, this project is about making the state of Utah safer for our communities, and making the facility safer for the people who work, volunteer and live there,” said Jensen. “Our current facility doesn't have the space or design needed to accommodate the treatment, education and therapy programs that are essential to helping people change the criminal patterns that brought them to prison.”

In addition to better responding to the needs of a changing inmate population, the development will reportedly provide numerous jobs and significantly increase the tax revenue for the city and state.

Jensen noted that a great deal of time and effort went into the project's planning.

“The new correctional facility was a highly-prioritized public policy decision that took years to make a reality. The project required legislative approval, community input, financial resource dedication and a commitment for improved program delivery, using evidence-based practices in the design.”

Kevin Miller, Utah Department of Corrections executive director, said officials were challenged with embracing new ways of thinking about incarceration, as well as designing a facility that improves the outcomes of the offender's sentence.

“The prison has very specific and mission critical imperatives for safety and security, but those are simply a part of the list of design determinants that influence the solution. A secure environment is, perhaps, more functionally driven than other project types, but that's a matter of degrees, not a wholesale difference. We're very concerned with the durability of the materials that are used and the ease with which the facility can be maintained, largely because once the facility is occupied, any maintenance is difficult to achieve.

“The cost of these facilities is high to begin with, and public sentiment is never favorable toward them. Aesthetic considerations are often a lesser priority than in the typical project, but Director Cook has been clear that he believes a more normative environment improves offender outcomes, so we're doing the best with what we have.”

One of the most interesting features of the building, said Miller, will be the housing section solutions.

“We have the entire range of inmates in this facility, which in and of itself is unusual, leading to a complete range of housing requirements, from the closest custody to something along the lines of a military barracks you might see in a movie. Typically, each of those housing types would have its own unique configuration.”

Miller said a 64-bed standard cell-based housing section has the same organization and footprint as a 64-bed cubicle dorm.

“We think this is a good budget strategy, and we also think it's a good management approach. Procedures and processes will be more standardized, incident response will be more uniform and the corrections officer moving from one housing type to another will intuitively know how the section works, even though the way the beds are provided is different.

“The feature that the average person will be most surprised by is the amount of daylight we've introduced into the housing sections. Daylight, and a visual connection to the natural environment, has a dramatically positive impact on the behavior of inmates. They are less stressed, and are easier to manage, more likely to behave appropriately and more likely to take advantage of the programs and services that prevent re-offending.”

Said Miller, “Those same benefits accrue to the corrections officers that spend their entire working lives inside these facilities. It's not just a better place to work, it's a place that allows them to do a better job. Providing daylight is a requirement of the national standards, but the way that we are providing it achieves outcomes that are far beyond the standard's expectations.

“Both the staff and the offenders spend extended periods in this environment, and we are firm believers in the power of architecture and designed environments. To that end, we are working within the palette of materials and the budget constraints to find an expression that's appropriate for the facility.”

Officials are early in the design process, with the final square footage of the facility changing each day. The target is approximately 1.2 million square feet of space, including recreation and religious programming spaces, along with occupational training

BDK is the project consultant, while Layton Oakland serves as the general contractor. Marilee Richins, deputy director, Utah Department of Administrative Services, said the project is not without its share of challenges.

“The new site is on undeveloped land that has none of the required infrastructure in place. Easements, utilities, land purchases and coordination with multiple project stakeholders is required prior to finalization of design packages.”

Approximately 60 percent of the widening of the frontage road is complete. Work on Haul Road began in mid-December 2016. This involved building a temporary 2-mi. road to the job site, installation of a temporary high voltage power line and constructing the contractor staging area. Construction involving the initial earthwork for the new prison site started in November 2017.

So far, the elements have not had a significant impact on construction.

“Weather has not been a factor beyond typical Utah conditions. The soil on the site is predominantly clay, and rain and snow can cause issues for access on the site. This will be an issue until the initial fill package is completed.”

Key tasks yet to be carried out include the completion of the project design, installation of permanent utilities and roads and construction of the new facilities. There are currently 30 people working at the job site each day, five days a week, with some Saturday work. Numerous other individuals are working on the design and support for the project. Anticipated peak labor will be around 2,000 tradespeople.

The project is located in an area of undeveloped land used as a winter grazing location for cattle. Wildlife is found all around the site.

Adjacent wetlands are identified and reviewed for compliance with regulations and permits. The construction team will monitor ground water discharge, dust control and mitigation, storm water management and disturbance to areas adjacent to the project site.

A wildlife expert hired by the state of Utah confirms the presence of burrowing owls and their burrows, and establishes boundaries and protocol to maintain their burrows and guidelines to minimize habitat conducive to their nesting, thereby reducing the potential of owls nesting on the project site.

As work continues on the project, crews anticipate the quantity of fill materials to be 877,000 to 950,000 cu. yds., depending on the final elevations on the site. The initial site work will involve an average of 30 double-belly dump and 15 truck and pups hauling an average of 9,000 tons of AIA fill material and 4,000 tons of gravel a day for approximately four months to place the initial fill for the project.

Heavy equipment typical of large highway projects is used for the placement and compaction of the imported materials on the site. The next site activity will involve similar operations to construct building pads and raise the elevation on the site to finish grades.

Building construction will require multiple large cranes, fork lifts and miscellaneous equipment to erect the buildings and finish the site. Some of the main materials being used during construction will include concrete; precast and steel cells; structural steel; roofing materials; glass and glazing; metal studs and drywall; glass and detention glazing; security systems; electrical and mechanical systems; and paint and finishes typically found on construction projects.

Officials are looking ahead to several milestones, including the start of vertical construction on the site in August 2019; substantial completion of the first housing unit by July 2020; and near completion of all detention housing on the site by January of the following year.

According to Michael Ambre, assistant director, Utah Division of Facilities Construction & Management, watching work get under way on the project has been extremely rewarding.

“It's always exciting and gratifying to see the years of preparation and planning finally get to the point where construction can start.”

The new facility will provide specific space for the treatment and housing of the mentally ill, as well as appropriate medical space for the care of our aging population, and needed space to provide programs and services proven to reduce recidivism, along with a better and safer working environment for the staff.

“Due to many factors that are working their way through the economy, our estimated cost of construction has risen. Material costs have and will continue to be affected by the magnitude and number of the recent natural disasters, which also is magnifying the availability of skilled construction workers. The current schedule has the prison ready to accept inmates in the second quarter of 2021, which allows for commissioning of the new facility, along with staff training.”

For Miller, the prison project represents a new beginning.

“The 'dull gray box', the clang of barred doors and the din of hundreds of offenders echoing off concrete walls, floors and ceilings is simply an expression of a collective attitude that prison ought to be as uncomfortable as possible. That's a notion that resonates with all of us, I think, to some degree. The problem is that the science says the threat of incarceration isn't a particularly good deterrent to crime, and the environments that are particularly punitive create better criminals, not better members of society.”