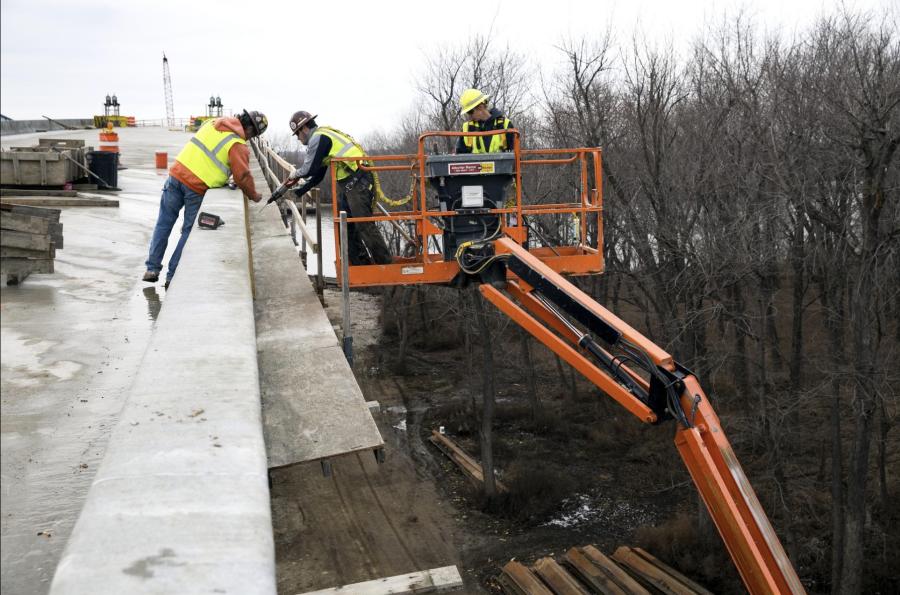 The new, state-funded $75.1 million bridge that will carry Illinois 104 over the Illinois River at Meredosia is approximately 45 percent complete, but the most dramatic portion of the construction will begin this summer.

Those who remember or have seen the video of the Gateway Arch construction in St. Louis in the 1960s will have a hint about how the two sides of the tied-arch bridge at Meredosia will be built from both sides and meet high over the center of the river.

Probably the most difficult portion of the project will be the 590-foot span across the river," said Illinois Department of Transportation District 6 construction engineer Ron Archambeau. "We will erect temporary towers on the two river piers that will support the tied arch as it is placed piece by piece across the river. It will be very dramatic-looking for four to six months."

The bridge span work will begin this summer, and comparisons to the Gateway Arch construction are appropriate because "that is exactly how this will be constructed," Archambeau said. "Part of the reason for using a tied-arch span is so that we have a 590-foot navigation width. The piers are actually right on the edges of the river, so we don't anticipate these piers will be hit by barges."

The main span of the bridge will consist of a half-moon-looking arch that will be 118 feet tall in the center and allow a 55-foot clearance for river traffic underneath. Including the new approaches, the entire bridge project will be 2,127 feet long and 44 feet wide with a total of nine concrete piers. Its two 12-foot traffic lanes and two 10-foot shoulders will be a dramatic safety and traffic-flow improvement from the current bridge's narrow traffic lanes and no shoulders, Archambeau said.

The existing bridge was built for $530,000 and dedicated by Gov. Henry Horner in 1936. According to an IDOT report for the 2016 Midwest Bridge Symposium, the current bridge has a "sufficiency rating of less than 15 out of 100. A low rating means it has numerous significantly deteriorated elements; requires close monitoring, maintenance and repairs; and is functionally obsolete," the report says.