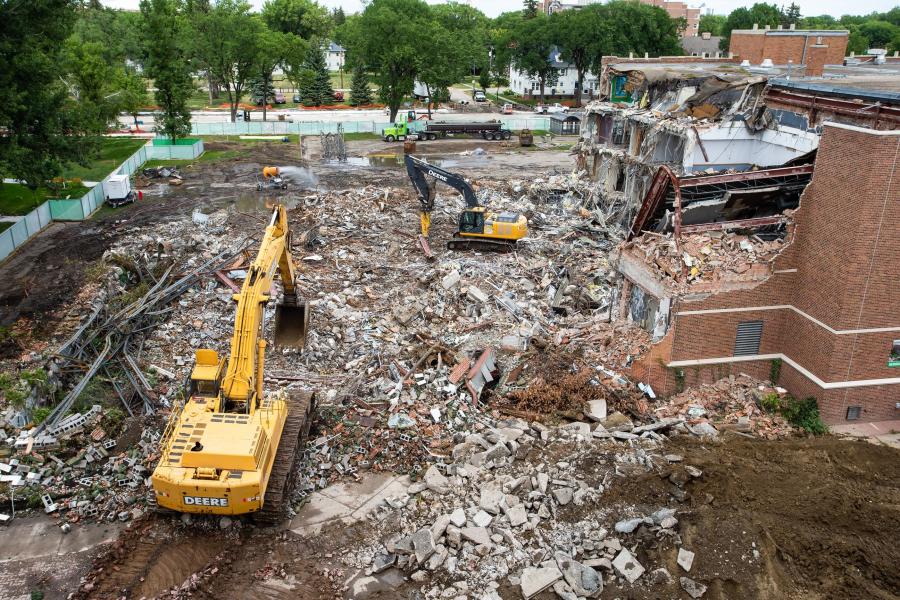 Demolition of the old UND Union took approximately 10 weeks. All debris was sorted, in order to separate as much recyclable material as possible. Rubble that could be salvaged was sent to local facilities. (University of North Dakota photo)

At the University of North Dakota (UND), crews are making significant progress on a new Memorial Union building. The $80 million, 158,000 sq.-ft. student union center will offer upgraded services and the latest in technology when it opens in 2021. 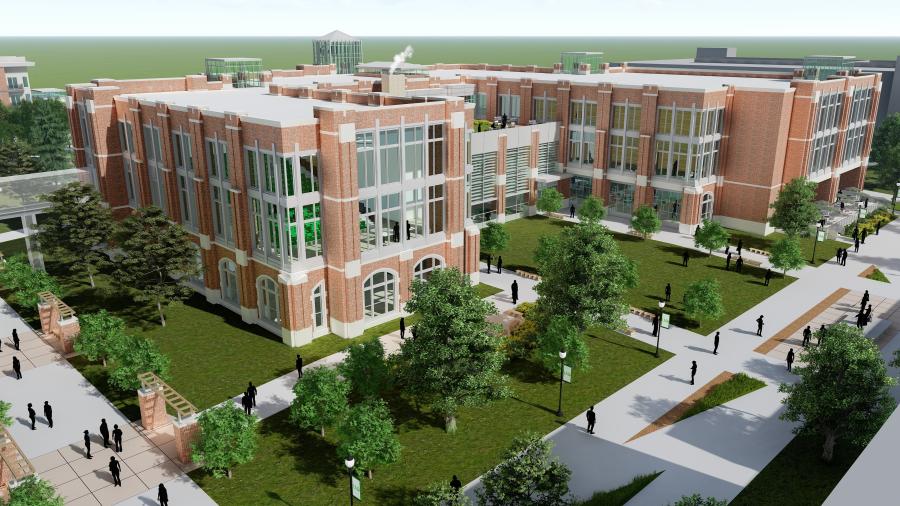 Memorial Union will include study and meeting spaces, a three-story atrium entry with natural light, energy-efficient windows and an open lounge with flexible seating and a variety of meeting spaces. Plans call for a multipurpose room with a balcony and retractable theater seating for 300.

The design allows for campus growth and seamless connections to future buildings through skyways and bridges. There also will be additional greenspace with room for gardens and lawn activities.

"As someone who has been a student and employee of UND over the past 25 years, and having spent so much time in the old Memorial Union, it was hard not to feel a little sadness — like losing an old friend — as the demolition got under way. As I watched the iconic canopy entrance fall to the ground, a flood of memories overtook me, only to be uplifted by the thoughts of what's to come, and the excitement among the student body for what will become their new, beautiful and high-tech home away from home on campus.

"Apart from the start of the demolition and our official groundbreaking, which took place during our Homecoming 2019 celebration, it's just nice to see the progress that's being made every day on this amazing facility, as its iron skeletal beams rise from the heart of our campus in preparation for future construction phases."

Dodds said people were curious in the days leading up to the demolition of the old Memorial Union as to how the building would be knocked down. 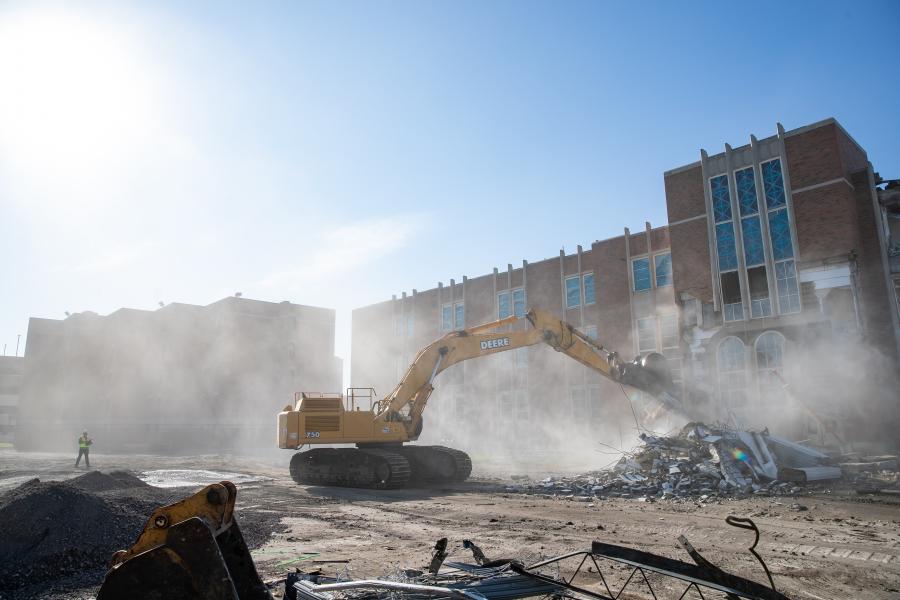 "Would it be a wrecking ball? Would it be something else? Would it fall in one fell swoop? The actual process proved to be a bit more anticlimactic. A large excavator with a bucket scoop was used to smash and claw into the structure and peel away the outer shell, layer by layer. A thin mist of water was constantly sprayed over the building for dust control, due to the fact that outside the perimeter fence was a very busy and public campus community.

"Front-end loaders would methodically consolidate the debris into large piles and then into the boxes of a constant parade of trucks that hauled it away."

The overall process took approximately 10 weeks, including utility disconnections and backfill. All debris was sorted, in order to separate as much recyclable material as possible. Rubble that could be salvaged was sent to local facilities.

The building is being paid for primarily by student fees. In November 2018, students voted to authorize changes to UND's student-fees structure to support demolition of the Memorial Union and construction of a replacement building. The North Dakota State Legislature granted authorization in the spring of 2019 to move ahead with demolition and construction of a new Memorial Union; however, newly named UND interim president Joshua Wynne requested the project be paused while he and other university leaders reviewed the proposal. Ultimately, Wynne recommended the project proceed under a revised plan that would reduce its financial impact on students by as much as 55 percent.

McGough/Construction Engineers serves as the general contractor of the new building, which is described as a modern design, with elements of Collegiate Gothic architecture to connect it with the historic academic core of the campus. UND staff and offices began the process of moving to temporary locations throughout the 2018-19 academic year, at which time preparatory construction work and asbestos abatement efforts commenced. Demolition of the building has already been completed, along with installation of underground utilities and masonry for stairwells and elevator shafts. 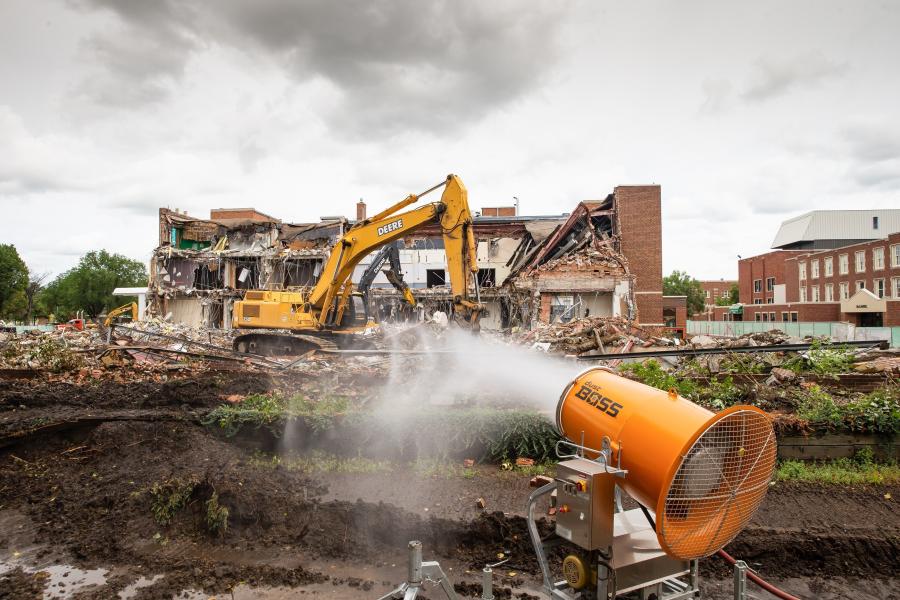 Brian Larson, UND director of construction management, explained, "The previous Memorial Union had served UND students and the surrounding community for many decades. The building was in sound structural condition, but had many major components at the end of their functional life. Additionally, the building did not provide UND students with modern technologies and design elements that are necessary for a Union to be an iconic destination on our campus."

Larson said the main construction concern on the project is working through two North Dakota winters.

"We had a very wet fall and an early winter, creating a number of challenges on the construction site. A large rain event in October set us back at least a week or more. Crews worked additional hours to make up for the schedule delay."

"Due to a very wet fall, we had a difficult time achieving compaction with onsite soils, forcing the project to haul away wet clay and haul in dry material," said Larson. "This was challenging, as the site is very tight, and we don't have the room to spread out the soil and let it dry."

Larson noted that concrete foundation installation was the most time-consuming activity.

"It required specific design strengths to be achieved before removing forms and continuing to the next pour, as well as temporary heating and shelter in order to keep working through the winter." 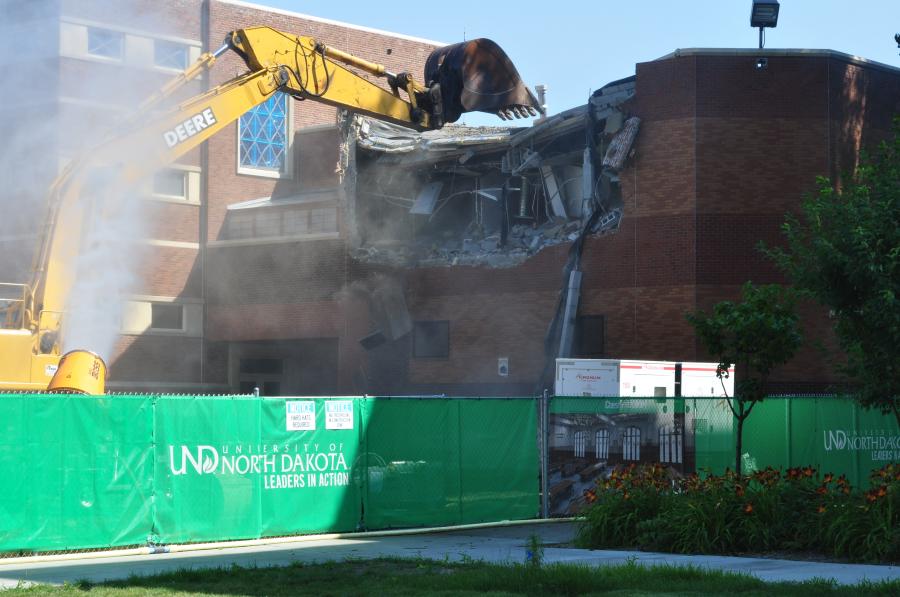 According to Gracie Lian, UND student body president, "Seeing the progress being made on the new Memorial Union has been incredible and almost unbelievable. When I was a freshman on campus, this building was a dream of student government leaders, and there was still a lot of work to do and a student vote that needed to pass.

"All the hard work put into this building by past student leaders is finally being made into reality, and to know that this is the type of impact we can have on the campus is so rewarding. It's going to be an incredibly versatile space that will be great for many events."

Matthew Ternes, student body vice president, added, "To see everything, from blueprints to the actual construction occurring, has been amazing. Having been involved in the process, both in the lead up to the vote and discussions that followed after the approval, it's been quite the journey for all involved in the project. It'll be exciting to see the building fully develop and open." CEG