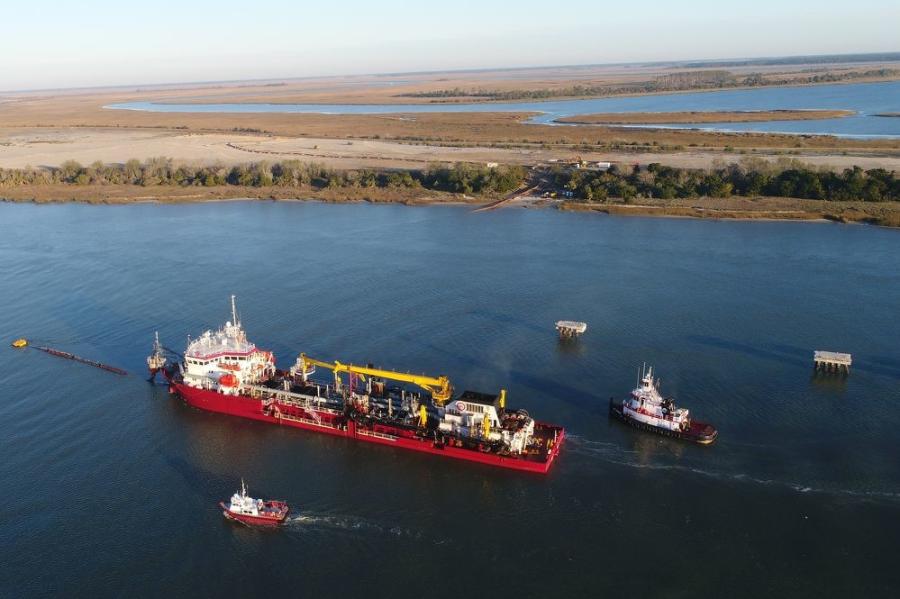 Started in January 2015, the $973 million Savannah Harbor Expansion Project (SHEP) is on time and budget with the U.S. Army Corps of Engineers overseeing the initiative that is deepening the federally-owned channel from 42 to 47 ft. at low tide (54 ft. at high tide) from Garden City Terminal (GCT) throughout the entrance channel of the harbor, which extends 20 mi. out into the Atlantic Ocean via the Savannah River.

The state of Georgia is contributing 25 percent of the cost towards the project, with the remainder being provided by the federal government.

The outer harbor, from the mouth of the Savannah River to the sea buoy at the entrance of the shipping channel, is now complete (including a 7-mi. extension to the channel). This constitutes half of the deepening project, while the remaining half covers the area from Fort Pulaski to the GCT.

Once finished, SHEP plans to improve the operations of the GCT, which handles 36 weekly container services — the most of any port situated on the United States' East or Gulf coasts. Over the next 10 years, the Georgia Ports Authority will invest approximately $2 billion in new cranes and terminal infrastructure to handle expanding cargo volumes. 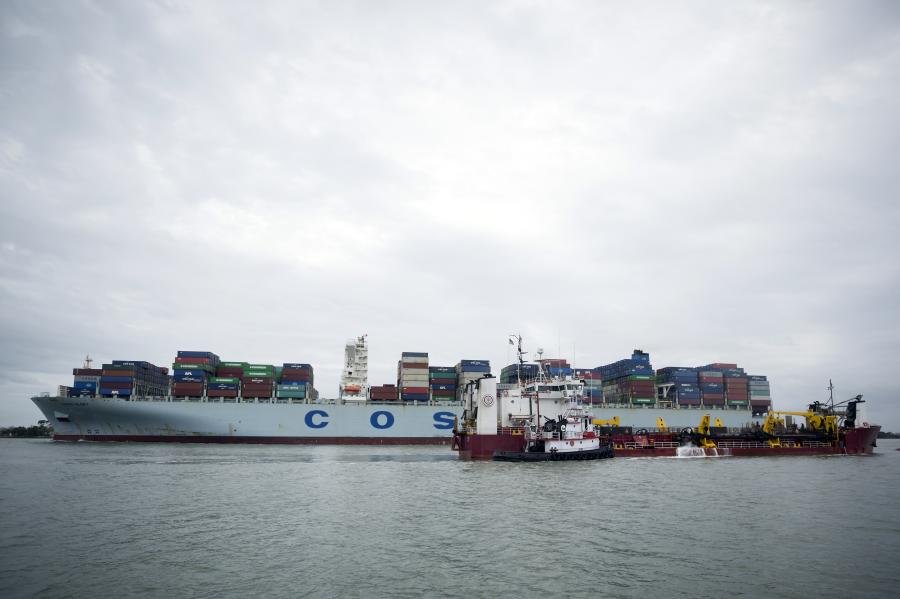 SHEP will allow the largest vessels calling on the port to take on heavier loads and to transit the river without having to wait for high tide.

Since the opening of the Panama Canal in June 2016, the average size of the vessels calling on the port has increased by more than 30 percent, and the largest ship to call Savannah by 2016 was a 10,000-TEU vessel, and by May 2017, the COSCO Development was the first 13,000-TEU vessel. In September 2017, the GPA served its first 14,400-TEU vessel, the CMA-CGM T. Roosevelt. More efficient Neo-Panamax vessels provide much lower container slot costs for U.S. exporters, which makes American-made goods more competitive overseas.

The Army Corps estimates that the deepening's net benefit in transportation savings for shippers and consumers would be $282 million per-year, setting expected total savings to the country over the course of 50 years at $14.1 billion.

"From a business perspective, any time you can find an opportunity where every dollar delivers that kind of return, it's an investment worth making," said GPA Board Chairman Jimmy Allgood. "That's a massive benefit for taxpayers, unmatched by any other maritime infrastructure project in the country."

Projections in the Army Corps' report indicate that the number of 20-ft. equivalent units (the standard measure for cargo containers) passing through the harbor will rise from 2.9 million in 2013 to 6.5 million by 2030, and that estimated annual transportation cost savings are $327 million per-year. For every dollar invested in the project, the nation will see $7.30 in return. 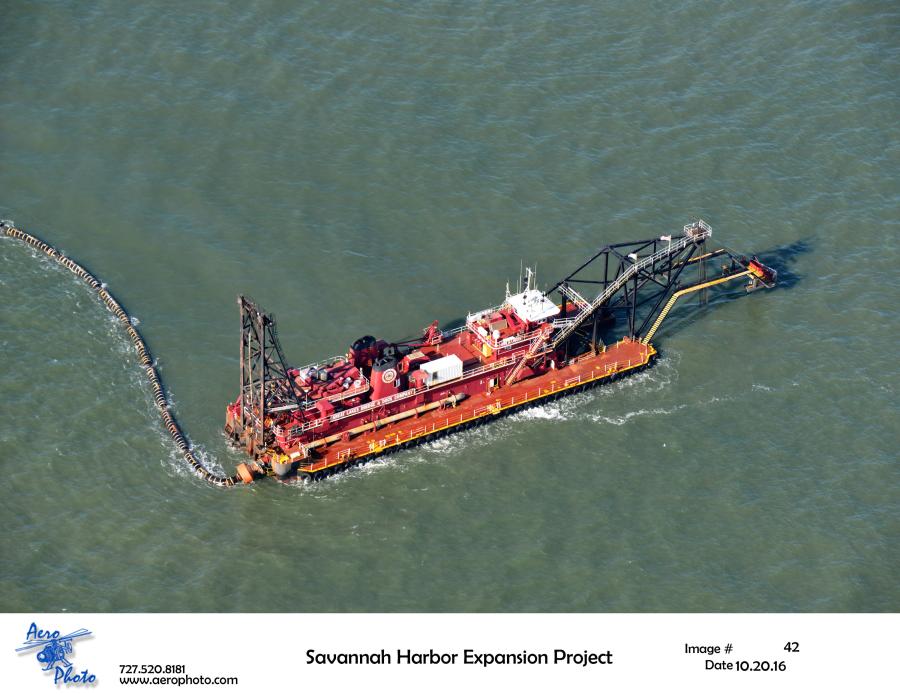 SHEP was in the planning and research phase for about 15 years. The Army Corps' Savannah district was responsible for designing the channel deepening project.

"One challenging piece was the recovery of the Confederate ironclad CSS Georgia," said Russell A. Wicke, chief of the Army Corps' corporate communications office, Savannah district. "We did not complete our initial recovery effort in 2014 because the work was more complicated than we expected. The large tide range in the harbor means that there is only a small window of time when divers can safely work in the dark-water environment to rig the remnants of the vessel on the river bottom. Two sections of the vessel's side [casemate] were found to be too large to remove with the cranes we had on site, and we could not obtain approval to break them into smaller pieces due to their historic value. We completed that work in the summer of 2017 with larger equipment that allowed us to raise those remaining sections of casemate onto a barge deck for documentation and collecting imagery."

The project benefits are measured on a 50-year life-cycle.

"We've made great progress to date," Wicke said. "The success of SHEP is possible because of great partnerships with the GPA, GDOT, resource agencies, and congress. We value our partnership with GPA and GDOT, and continue to work closely with them on this project."

To protect wilderness areas and wildlife, the U.S. Environmental Protection Agency, U.S. Fish and Wildlife Service, the National Oceanic and Atmospheric Administration, the National Marine Fisheries, state agencies in Georgia and South Carolina, and others worked together to develop an environmental mitigation plan based on three major steps: avoid impacts, reduce impacts and mitigate/compensate for unavoidable impacts.

"The final report concluded that the environmental impacts of deepening the channel could be mitigated to an acceptable level," Wicke said, "with mitigation features accounting for about half of the total project cost. Substantial coordination with the public also occurred through multiple meetings of a stakeholders evaluation group."

Protecting and restoring wetlands was crucial, with flow re-routing of freshwater into the Back River area on the South Carolina side of the river being a key element. 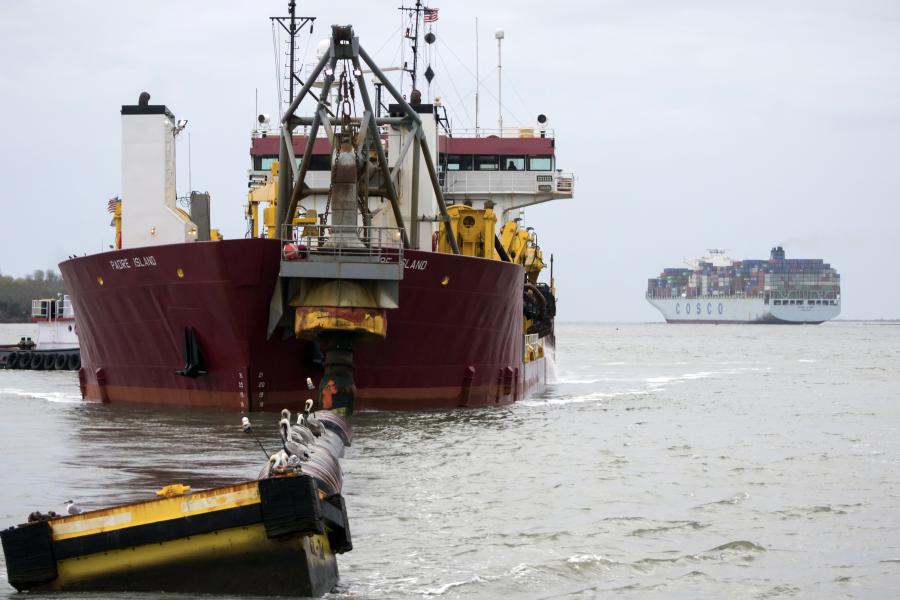 To compensate for the excavation of 16 acres of tidal brackish marsh to remove Back River tide gates (completed December 2017) and expand the Kings Island Turning Basin, 28 acres of brackish marsh will be restored on Onslow Island, a dredged material disposal site in the upper portion of the harbor. Other efforts include protecting spawning areas for striped bass; building a fish bypass at New Savannah Bluff Lock, Dam Harbor deepening to allow for additional saltwater to enter the harbor and travel farther upstream into areas currently used by endangered sturgeon species and others to reach historical sturgeon spawning grounds; and setting up and maintenance of a dissolved oxygen system consisting of two separate plants (one on Hutchinson Island and one near Plant McIntosh) which are nearing completion.

When the project is completed, a post-construction monitoring period of 10 years will be initiated to allow the Army Corps to make adjustments to the plans as necessary.

Great Lakes Dredge & Dock started the work in August 2015 and finished it in March 2018. A major challenge was the layer of clay at the bottom of the channel.

"It was hard to work through," said Armand F. Riehl, GLDD's project manager. "We knew that going in and we planned accordingly, and got through it ahead of schedule. This limited production at times made it difficult to have an even bottom. The shipping channel had different acceptance areas and at times we had multiple dredge and acceptance areas being dredged."

Communications and coordination were crucial for the work as the channel was open to traffic throughout the project.

"We communicated with the pilots on a daily basis," said Riehl, "and very successfully minimized delays to the job."

The work was done primarily by specialized boats that were fully equipped, supported by laydown yards along the route and field offices. This was also a year-round, 24-hour operation that covered 18 mi.

"We used two types of dredges," Riehl said. "There were environmental windows for certain dredges. We used trailing suction upper dredges, which removed sand off the bottom with dragonheads during the winter months and cutter section suction dredges during the summer months, along with spider barges and disposal scows. We sequenced the work to finish one mile of channel at a time for one acceptance area."

The environmental restrictions were recognized and included in the planning process that occurred prior to the work, which was adjusted weekly and monthly based on benchmarks being completed. Relations with the Army Corps and the GPA were excellent. 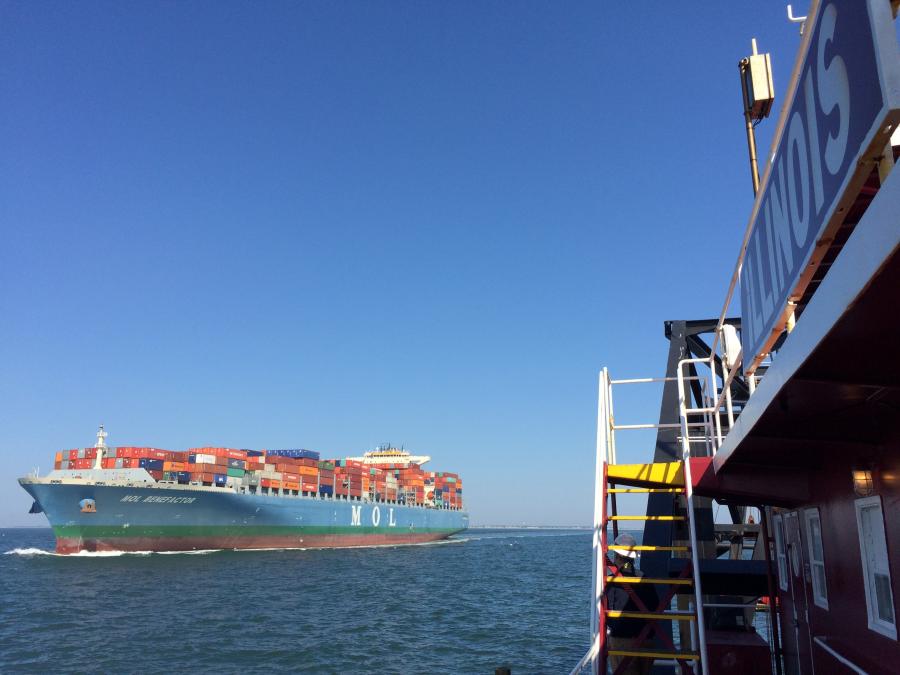 "Depending upon the scale, it could be an hour to find a resolution on something that was minor or within a week on bigger ticket items," according to Riehl. "Regardless of the scale, avoiding delaying the project was always accomplished. The Corps designed the depth and the natural slopes to keep the channel stable."

"They were on site for the expertise and the execution of the plan," Riehl said. "They have a lot of expertise on projects like this."

In terms of materials removed — 11 million cubic yards of clay and sand — 90 percent was taken to the Ocean Disposal Site (ODNVS) and 10 percent was pumped upland onto the Jones Oyster Island Disposal Area.

"The plan we put in place worked well," Riehl explained. "The ships picked up the sand and other materials into the hopper inside the ships, which sailed to the disposal areas and pumped it out. The materials were transported in a slurry form and mixed with water from the ocean. We experienced a fair share of inclement weather off-shore at times."

GLDD self-performed all the work, which on peak days had between 100 and 120 people on site, along with management and other salaried staff to track the work. Each vessel had two shifts, with up to five vessels used for the project. The vessels, owned by GLDD, are based along the Atlantic coast. Repairs to the onboard equipment were done by mechanics sent to them and by the crews themselves.

Riehl was very pleased with the efforts of the crews. "They all know their job infinitely," he said, "and trained appropriately to achieve the work that was required day in and day out.

"We saw various general maintenance repairs during the length of the project taking anywhere from a few hours to several days," said Riehl.

GLDD purchases equipment from regional and local dealerships in many parts of the country.

Riehl has been involved with 12 dredging projects.

"This was a relatively typical channel deepening project," he said. "A lesson learned on this one was the power of partnering with the Corps and local river users, such as the pilots and the port. The Corps designed and led this project from the beginning." CEG