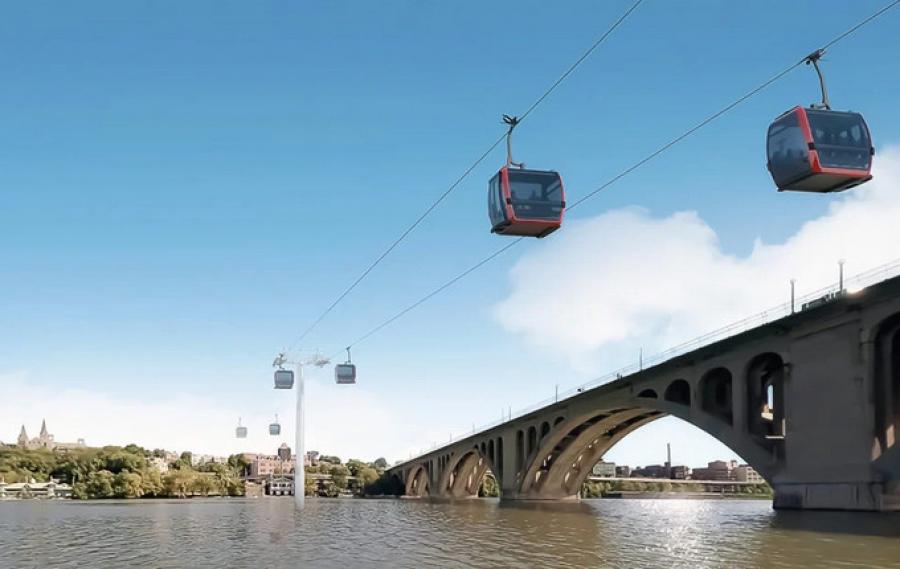 A 2016 study projected a gondola would allow people to travel more quickly between Washington and Virginia, and would serve at least 6,500 passengers a day. (Georgetown BID rendering)

For almost 10 years, the District of Columbia has talked about the possibility of building a gondola system to carry people over the Potomac River between Rosslyn, Va., and Washington, D.C.'s Georgetown neighborhood.

Once left for dead, the idea is again gaining attention, according to the Washington Post.

The D.C. Council recently set aside $10 million in its 2022 budget to acquire property at a former Exxon gas station across from the Francis Scott Key Bridge in Georgetown, where it envisions a landing station for the proposed cable-propelled transit system.

Securing the half-acre land at 3607 M St. NW would give the District more than a location for the gondola terminal, according to many Washington business and civic leaders, but also give the city control of a piece of property that could be used for a long-sought Georgetown Metro station.

"One day the city is going to use this [parcel] for transit," said Joe Sternlieb, president, and chief executive of the Georgetown Business Improvement District. "It might be in the near-term for a gondola, but it will certainly be in the longer-term for Metro."

D.C. Council member Brooke Pinto, a Democrat who represents Georgetown and led the push for the land acquisition in the Council, listed it among her budget priorities in a March 25 letter to Mayor Muriel E. Bowser, the Post reported. She had urged the city to allocate $12 million for the property acquisition and $2 million to complete environmental studies of the project.

The council approved $10 million in its capital budget and allocated it to the District Department of Transportation (DDOT). Agency officials said they have yet to review the plan for the property and have not started negotiations.

More immediately, the Georgetown site would be used as a charging station for electric vehicles, according to Pinto, with the possibility of becoming a gondola terminal connecting to the Rosslyn Metro station. Some proponents had hoped the system would be in place by 2024, but its environmental studies are not complete — a process that could take several years.

Officials also have told the Post that the site could be used for a Metro station. An ongoing study by the Metro to address tunnel congestion at the Potomac River includes the possible construction of a second tunnel near Rosslyn and running the Blue Line through Georgetown. That plan would cost billions of dollars and take 25 years to execute.

Pinto also did not respond to the newspaper's multiple requests for an interview. In a statement, though, citing the city's "ambitious climate and clean energy goals" she explained establishing electric vehicle charging stations at the site would be one way to encourage electrification of private and public transit. She did not mention the possibility of a gondola landing site or a Metro station, however.

"Now that the budget has passed, [the deputy mayor for planning and economic development] and DDOT should move forward expeditiously to work with public and private partners to pursue a new EV charging station at this site," Pinto said in the statement.

In her March letter, however, she referred to the gondola system as a potential option if studies demonstrate "it is the most cost effective, green transportation option for commuters."

A 2016 study found that building a gondola connecting the District and Arlington, Va., would be a feasible endeavor. The study, partially paid for by the two local governments, Georgetown University and the Georgetown Business Improvement District (BID), projected a gondola would allow people to travel more quickly between Washington and Virginia, and would serve at least 6,500 passengers a day.

A gondola also could ease traffic on the Key Bridge, one of the busiest arteries connecting D.C. and Virginia. Crossing from the Rosslyn Metro station to Georgetown would avoid traffic and only take about four minutes, according to its backers.

The study, obtained by the Post, noted that a gondola system would cost between $80 million to $90 million to build, with annual operating costs near $3.25 million. Those figures have allowed gondola proponents to tout the concept as a cost-effective and efficient way to solve Georgetown's lack of Metro access, which makes it difficult for visitors, workers and residents to get to the neighborhood and leads to some of the busiest bus routes in the city.

Arlington County, Va., transportation officials said the municipality is working with the District "on understanding this planning effort," but one county board member said he is not convinced a gondola is the solution.

Christian Dorsey (D) said the county will have to decide whether it makes sense to commit public money to the project.

"It's a fairly short walk from the Rosslyn Metro station to that station in Georgetown," he said. "What's the overall bang for the buck that we get providing a gondola transport over the Key Bridge versus the other modes that are already there?"

DDOT Director Everett Lott said in an interview with the Post earlier this year that a cable-car system is not off the table as the city explores more transportation options to reduce single-vehicle trips.

"It's just another alternative, another mode of transportation that I think is fantastic," Lott said in his remarks to the newspaper, adding that a gondola is something his agency has "had at least exploratory conversations about."

The $250,000 study is intended to improve transit in the neighborhood. Whether that includes a gondola, a rapid bus transit option or multiple alternatives remains to be seen, noted Laura Miller Brooks, a senior transportation and infrastructure associate at FC2 who is overseeing the study.

Williams said the city of Washington is on the right track to purchase the former Exxon station site, which he called "a strategic multimodal transportation acquisition."

"There are a host of short-, medium- and long-term transportation uses, from EV charging and last-mile delivery staging to a Metrorail line station," he said. "Activation of this prime parcel of underutilized city and neighborhood space will help increase sustainable access in Georgetown."

The west-side Washington neighborhood, on the banks of the Potomac, supports about 23,000 jobs and hosts approximately one million visitors a month, according to estimates from the Georgetown BID.