A Great Man's Life, Legacy From a Single Hard Hat

The hat speaks volumes to anyone in the heavy iron industry that lays eyes upon it. 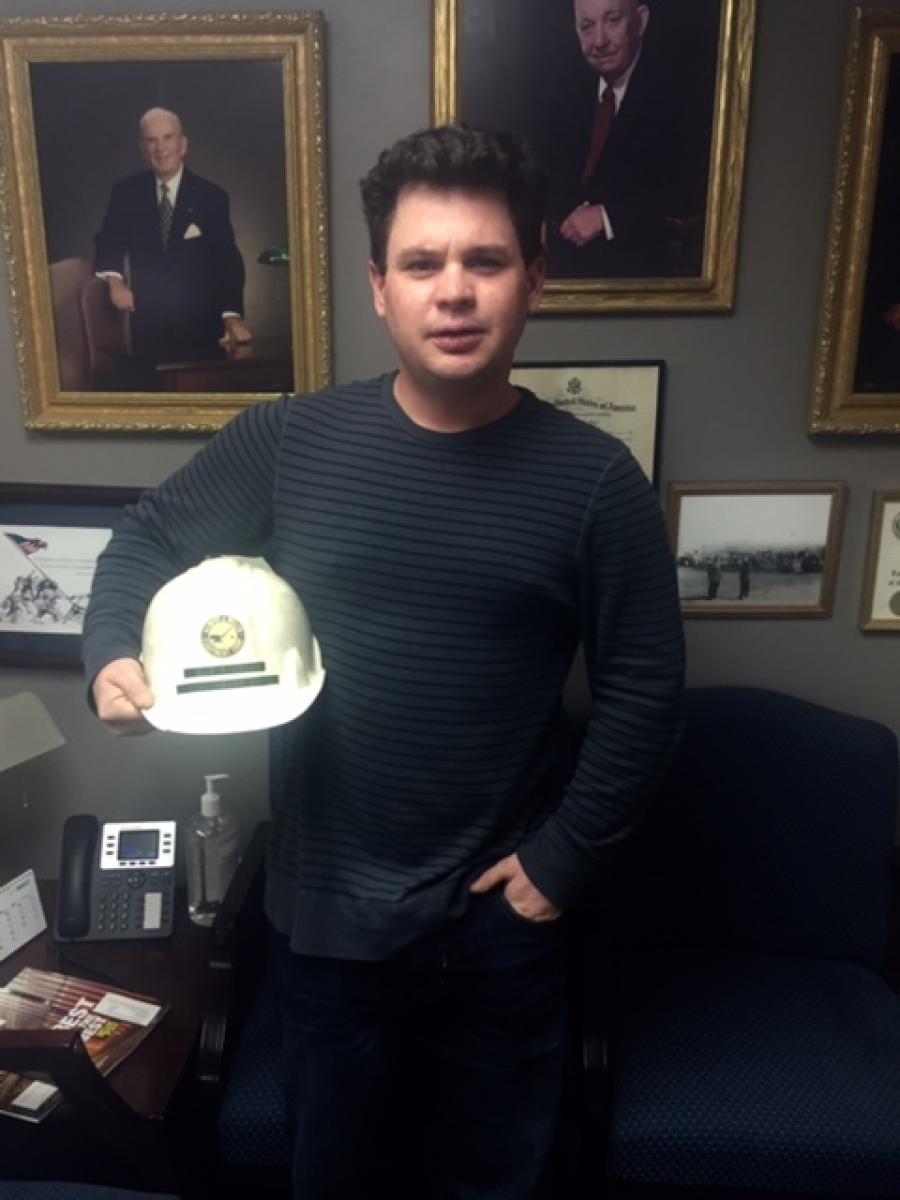 Rich Welch of the Welch Corporation received a hat from his cousin, Thomas Nolan.

Most hats do not tell the life story of a man; most reflect what he likes, not what he was.

But when Rich Welch of the Welch Corporation received a hat from his cousin, Thomas Nolan, it was hard by definition only; yet with an old letter-raised plastic I.D. label across its center, a patch of dirt on its visor, a four-inch crack through that visor and various dents, nicks and scratches, it was easy for Welch, with tears in his eyes, to immediately ascertain that this single head covering told the entire life story of a man — his beloved grandfather who founded the long-running family company for which he estimates construction jobs.

The hard hat that Welch received from his cousin, Thomas Nolan, is the shared keepsake of two grandsons. Both are the fourth generation progeny of Albert J. Welch Jr., a brave military and construction veteran who died in 1998.

Out of the Shadows

The precious hard hat was long since forgotten.

“My cousin said he had found the hard hat in his parents' house. They live in Winchester, Mass. My cousin said, 'You should have it,' when he texted me to let me know he had found it,” said Welch. “Being a fourth generation member of the Welch family, working for the company that my grandfather dedicated his life to build up and make a success, is a tremendous honor I carry with me every day. To have his hard hat that he wore as a reminder of that is something I will keep with me forever.”

Welch was ecstatic to say the least.

“My grandfather is my hero and I think about him on a daily basis. He was a remarkable man and I meet or run into people whose lives' my grandfather made a mark on,” added Welch. “Receiving this hard hat, to me, was better than being given a bat autographed by Ted Williams, because I idolize my grandfather in the same way baseball fans idolize 'The Splendid Splinter.' ”

Speaking From Its Marks

The hat speaks volumes to Welch and anyone in the heavy iron industry that lays eyes upon it. It is simple standard size and white hard plastic composition, the same as a million others to protect human heads on construction site jobs.

But to Welch it says everything.

“The hard hat being dirty is what struck me the most; it made me think what jobs we had done in the past and to wonder where the dirt on the hard hat could be from. The best part is the label that is still intact on it. The label says the name of the company in capital letters: 'A.J. WELCH CORP.,' and his name, 'ALBIE WELCH.' 'Albie' was his nickname and it is how his friends, the Boston community, and construction industry referred to him. My grandfather ran the company for the better part of 30 years before passing on ownership to my father David J. Welch Sr., and my uncle Albert J. Welch III.”

The Welch Corp, founded by Albie Welch's father, is still in operation today, with more than 65 years of experience in the excavation industry and nearly 150 skilled laborers, equipment operators and foremen. Based out of Brighton, Mass., the company offers a full range of site work services to the New England area.

It was dedicated, his grandson added, to the “ideals and values my grandfather instilled, with his brother, John E. Welch Sr., and their father, the patriarch, Albert “Doc” Welch Sr.

The helmet crack, Rich said, made him laugh because, “Those hard hats are pretty hard to crack. When I asked my uncle, Albert J. Welch III, who is Albie's son, how it might have happened, he said, 'God only knows.' It probably fell off his head as he was climbing up a pile to take a picture of a job and [it] got run over.”

It wasn't the first helmet cracked or run over, that covered Albie Welch's head. With the outbreak of World War II, he enlisted in the United States Marine Corps, serving in the Pacific Theater, seeing heavy action of Iwo Jima, and being honorably discharged as a Corporal in 1946.

“My grandfather was a remarkable man. He was extremely generous and always had a kind word to say to someone. He always asked how someone was doing, which is the first thing people say to me when I meet them,” said Welch. “He put others in front of himself and, if there was any way he could help someone, he would. All the success he attained in construction never went to his head. He remained a symbol of humility his entire life.”

Albie Welch was extremely dedicated and passionate about the family business, making an indelible mark on the construction industry in Boston and Massachusetts.

Welch Corp. has built innumerable state buildings and landmarks, including the Pilgrim One Power Plant in Plymouth, Mass., St. Elizabeth's Hospital, Boston Public Library, the popular Cambridgeside Galleria Shopping Center and even Deer Island in Boston Harbor, among many others.

Albie Welch passed in 1998 and his hard hat lay as an aside until last month.

“I was lucky enough not only to be his grandson, but luckier to have even known him,” said Rich Welch.

Though he can no longer hear his grandfather's voice, the hard hat, by its mere presence and marks, whispers its legacy to his family, his business, and any man wearing one in the field. Welch will display it prominently in the Welch offices.

“This hat says he wasn't afraid to work hard and do what it takes to get the job done,” said Welch. “He was not the guy in the trenches every day. He was the vice president and treasurer, which made it being dirty that much more astounding.”

There are no plans to wash, clean or repair it.