The Blizzard of '96 was incredibly massive and truly historic in its scope. 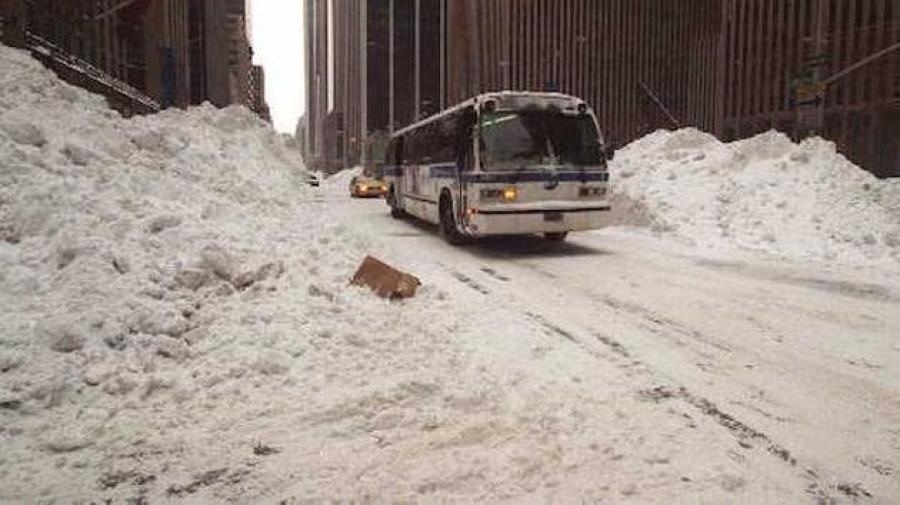 Image courtesy of ABC7NY. Every city along the northeast megalopolis, from Washington to Boston, received between 17 to 30 inches of snow.

The Blizzard of 1996 was incredibly massive and truly historic in its scope. All-time snowfall records were widespread, including 24.9 inches in Roanoke, Virginia; 30.7 inches in Philadelphia, Pennsylvania; 27.8 in Newark, New Jersey; and 14.4 inches as far away as Cincinnati, Ohio. Every city along the northeast megalopolis, from Washington to Boston, received between 17 to 30 inches of snow. While other storms have been bigger in any given city, it appears that there has never been a greater snowfall event for such a large, highly populated area of the Eastern U.S.

Snow began falling in Washington during the late evening of Saturday, January 6 and continued at an amazingly steady rate until mid-afternoon Sunday, January 7. By that time, 13 to 17 inches of snow had accumulated in most areas, with up to 20 inches in the distant western suburbs.

For several hours during the afternoon, sleet took over, primarily in the eastern suburbs. The precipitation stopped during late Sunday afternoon and early evening, giving the impression that the worst of the storm was over.

But this proved to be just a lull. During the overnight hours, as the storm crawled slowly north along the Delmarva Peninsula, bands of heavy snow redeveloped and swept into the area from the east. The snow bands were accompanied by lightning, thunder and whiteout conditions. Gusty north winds, which at times approached 40 mph, created a blizzard-like scene. By Monday morning, January 8, the snow squalls had tapered off, leaving the Washington Metro area buried under 15 to 25 inches of snow.

On Monday, road crews began the epic struggle to dig out from the crippling snowfall. The entire region was shut down. High winds caused snow to blow back onto plowed roads, and many streets were not plowed at all. The Metro system fared no better as frozen rails crippled the outside portion of that system. One train, with one hundred passengers on board, got stuck for five hours near Takoma Park.

The Blizzard of 1996 was just the first of three snowstorms to hit the Washington area during the snowy week of January 7-12, 1996. On January 9, a weak Alberta Clipper storm center passed directly over the region, dropping another quick shot of surprisingly heavy snow on the area. Transportation officials across the region were forced to refocus their efforts on the major highways.

The Alberta Clipper snowfall pattern was very different from the blizzard. The western suburbs were dusted with only an inch of snow while up to six inches of snow fell in the eastern areas such as Prince George's and Charles Counties. At the conclusion of the Clipper storm, two-foot snow depths were fairly common across all sectors of the metro region.

Wednesday, January 10, was a nice sunny day with the high temperature reaching a relatively balmy 34°F. Nevertheless, snow removal in residential neighborhoods proceeded quite slowly. As late as Wednesday afternoon, fifty percent ofPrince George's County residential streets were not plowed and forty percent of Fairfax County's streets had not seen a plow.

Finally, on Thursday, January 11, the Federal Government reopened for the first time in nearly a month, following an extended furlough and the weather-related shutdown. However, the morning and evening rush hours proved disastrous, with major roads narrowed significantly by tall snowbanks. Also, many Metro trains remained out of commission, still mired in deep snowdrifts.

The third and final blow of the snowy sequence took place on Friday, January 12 as a quick moving coastal storm dropped 5 to 12 inches of snow across the region. The snow began during the predawn hours and was over by early afternoon. Snow fell heavily during mid-morning, before switching over to sleet east of Washington. West of D.C., the storm produced mostly snow and was heaviest in central Maryland. From Philadelphia northeastward to Boston, the storm produced mostly rain, with only a brief period of snow before a changeover to rain occurred.

However, many problems still remained. As late as Tuesday, January 16, dozens of Washington neighborhoods had still not seen a snowplow and were virtually impassable to traffic. The commute on Tuesday, January 16, was terrible.Snowbanks blocked traffic lanes and sidewalks, causing drivers to battle pedestrians for the right of way. Some commuters spent half of the day simply getting to and from work.

A rapid thaw brought 62°F temperatures and heavy rain into the area on Thursday, January 18. The huge snow piles vanished overnight and green grass appeared where deep snow had blanketed the ground just a day earlier.

The sudden meltdown sent the Potomac River surging far out of its banks. The river approached levels not seen since Tropical Storm Agnes in 1972. Several blocks of Old Town Alexandria were under water and the George Washington Parkway, Clara Barton Parkway, and many other roads were closed due to flooding.