A Vision of the Future: Inside Nashville International Airport's $1.2B Expansion 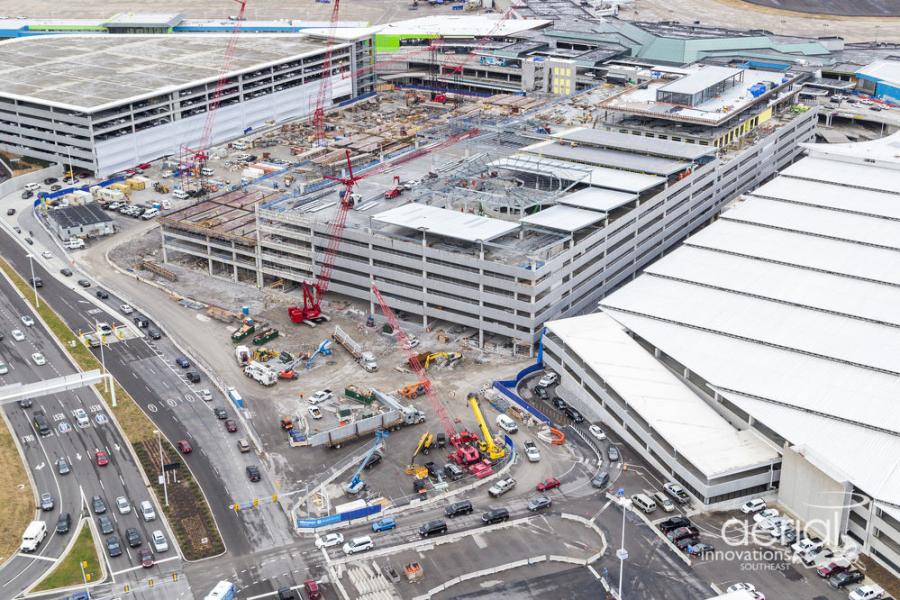 Overhead view of construction on the six-level, 2,800-space short-term parking structure as part of BNA Vision.

Since its establishment in 1937, the Nashville International Airport has undergone numerous name changes, expansions and renovations. The public/military airport in southeast Nashville, Tenn., currently hosts 16 airlines with 585 daily flights, including nonstop flights to more than 70 cities in North America and Europe. In addition, Berry Field Air National Guard Base is located at the airport — which was the genesis for the airport's IATA identifier: BNA.

Growth in passenger numbers and flights has increased at BNA substantially since 2011, with total passengers hitting a record 10.3 million in 2013. In 2017, the airport was named the fastest growing airport of any size and was given an award a year prior to acknowledge its 11.2 percent growth in passenger traffic in the mid-sized category. Nashville International Airport reported a 15 percent increase in passenger travel last year while continuing to hold claim to the title of fastest growing airport in the country. 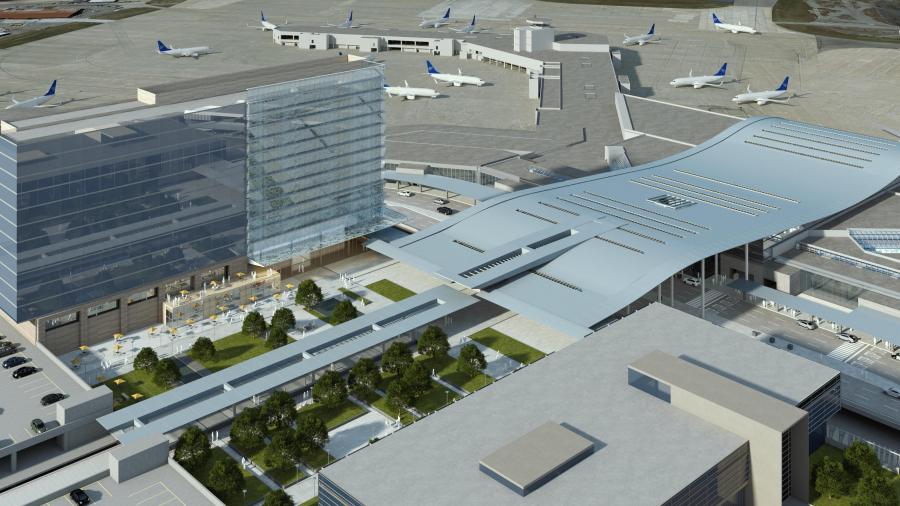 With the number of passengers climbing and goals of adding more non-stop destinations, increasing cargo service and broadening international flights, it became clear that the terminal, built in 1987, was inadequate to keep pace with the airport's growth. Therefore, the Metro Nashville Airport Authority launched a $1.2 billion renovation called BNA Vision in 2016.

BNA Vision is a growth and expansion plan comprised of several separate projects that include expanding and reopening Concourse D, constructing a new international arrivals facility, expanding and renovating the central lobby and ticketing hall and building new parking garages. The entire project is expected to be completed by 2023.

The airport also is updating its master plan to accommodate future growth. The master plan update includes potential future plans such as the expansion of Concourses A and D, lengthening runway 2L/20R to better accommodate long haul flights and construction of a second terminal.

According to Kym Gerlock, director of communications for the Nashville International Airport, new parking facilities are just one part of BNA Vision. The first garage includes a ground transportation center and 2,200 parking spaces, and is one of "only 35 parking structures in the world that have been awarded Parksmart Bronze certification," Gerlock stated. 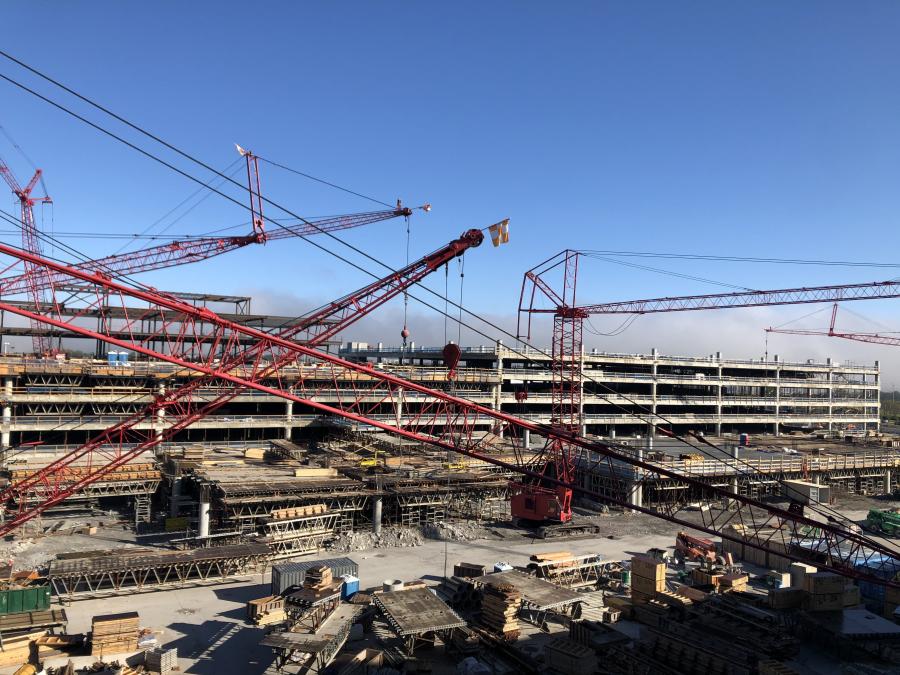 Currently underway is a six-level, 2,800-space parking garage directly across from the terminal in the footprint of the old short-term garage, which has been demolished. It was designed and built by the Messer Construction Co. and Moody Nolan team, and is scheduled for completion in spring 2020.

The total amount of rock removed during demolition totals 25,000 cu. yds. By the time the post-tension concrete garage structure is complete, 55,000 cu. yds. of concrete will have been placed, Gerlock said.

Demo work on the short-term garage began in January 2019, followed by construction of the new facility. "In February of 2019, there were 40-plus pieces of heavy machinery in the 7-acre footprint," Gerlock stated. That list includes:

Gerlock reported that eight cranes were on site at peak construction, the largest of which was a 230-ton Manitowoc 888 and the oldest of which were four Manitowoc 4000s, circa 1965.

The terminal parking garage is functionally operational. Currently underway as part of BNA Vision is a new valet pick-up/drop-off area on the ground level, as well as a new 64,000-sq.-ft. airport administrative building and pedestrian plaza on the fifth level. 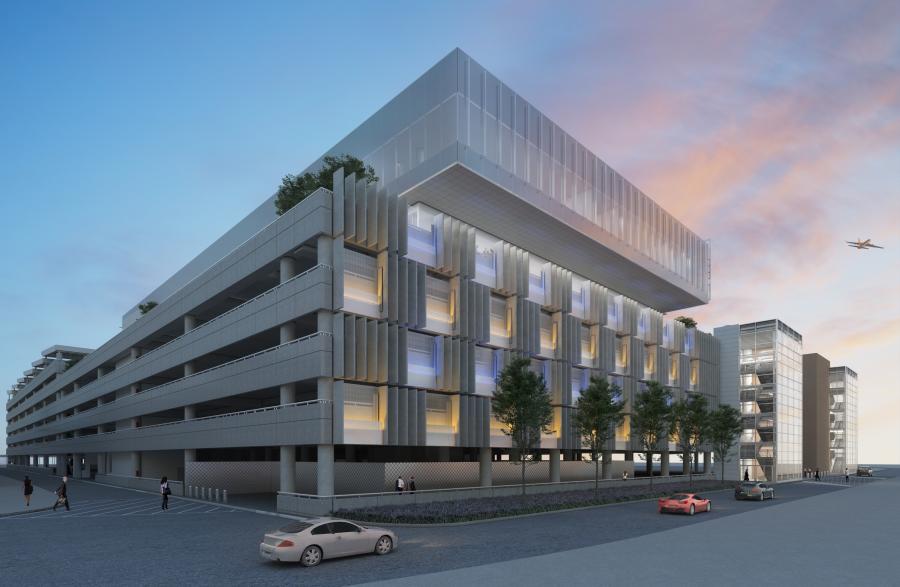 The new office building will replace space on the fourth floor of the terminal and provide an area for the Transportation Security Administration and other airport services. Both are expected to be complete in early 2021.

A new 115,000-sq.-ft. Concourse D with six domestic aircraft gates, new dining and retail options, a live music stage and public art installations broke ground in June 2018. This project will create 200,000 sq. ft. of new space at the north and south ends of the main terminal, adding additional capacity for ticketing and four new baggage carousels. Design and construction, including renovation of 136,000 sq. ft. of existing terminal space, is by the Hensel Phelps and Fentress Architects teams. Concourse D and both north and south wing extensions are expected to open in summer 2020. A free-standing central utility plant has already been completed.

The 440,000-sq. ft. project includes a terminal lobby expansion and overhaul. The security checkpoint will jump to 24 lanes, more than doubling the pre-BNA Vision checkpoint of 10 lanes.

A distinctive, sweeping roof canopy will let in natural light and provide compelling views of the airfield. The refurbished lobby will include a new central marketplace beyond the security checkpoint. The International Arrivals Facility is expected to open in late 2023.

Phase 1 involved covering a 50-foot airfield depression with 55,800 dump truck loads of fill and paving the resulting surface area to create a construction laydown area, which will accommodate the building of the International Arrivals Facility. Phase 1 started in June 2018 and was completed in September 2019.

Phase 2 will commence in 2023 with the paving of 13 acres of space adjacent to the terminal for use as aircraft maneuvering and parking. The Terminal Apron and Taxilane Expansion Project is expected to be completed in the fall of the same year, concurrent with the opening of the International Arrivals Facility.

With more people flying in and out of Nashville, traffic has increased significantly. To improve access to the airport and better circulation around it, the Donelson Pike Relocation and Terminal Access Roadway Improvements projects, a Tennessee Department of Transportation responsibility, will straighten Donelson Pike from the taxiway bridges to Interstate 40, enhance airport access to and from I-40 East and West and improve safety.

The Terminal Access Roadway Improvements are a BNA project designed to expand BNA's terminal loop roadway from 1.3 miles to 1.9 miles, increase roadway travel lanes to add capacity and improve traffic flow by enhancing access to I-40. Currently under design, construction is expected to start in Spring 2021 with Fall 2023 targeted for completion. It will be conducted concurrently with the realignment of Donelson Pike.

According to WTVF-5 in Nashville, not only is business as usual at the Nashville International Airport, but records are being broken during construction.

"There is a lot going on … actually $1.2 billion worth of work going on," Shannon Sumrall, a spokesperson for Nashville International Airport, told the news station, adding that they are working to keep TSA wait times down and other parts of the airport experience the best they can during construction by having all of the airport entities work together. "We work closely with all of our business partners, our airlines, TSA, to make sure that we're properly staffed so we can handle whatever the numbers may be," Sumrall said.

The first phase of BNA Vision is expected to be completed in 2023. Airport officials report that it is currently on-track, with numerous projects currently underway. No local tax dollars will be used in funding the project. BNA reports that funding will come from bonds, federal and state aviation grants, Passenger Facility Charges and other airport funds. CEG