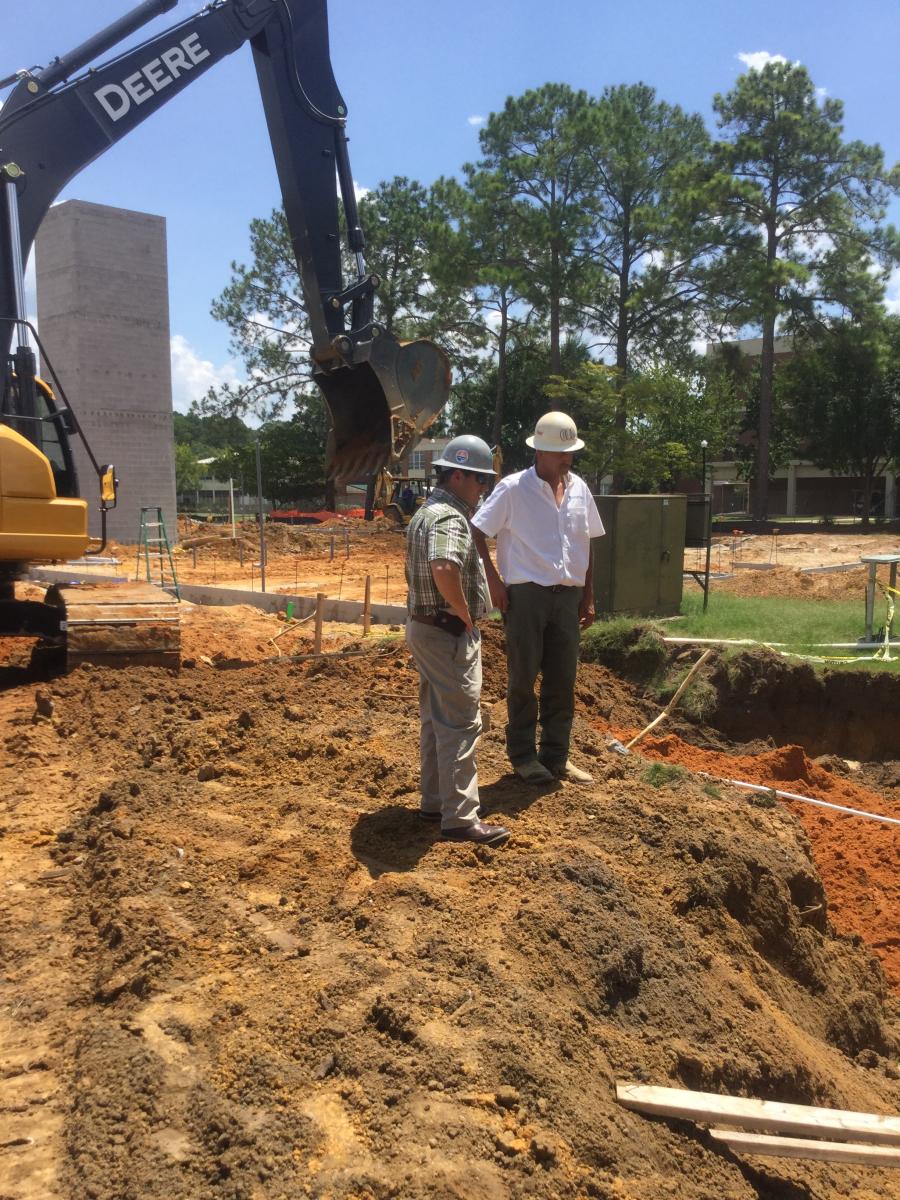 IPG Incorporated Located on the north side of the Abraham Baldwin Agricultural College (ABAC) campus in Tifton, Ga., the school’s new laboratory sciences building will provide biology majors with the most current technology and techniques.

Located on the north side of the Abraham Baldwin Agricultural College (ABAC) campus in Tifton, Ga., the school's new laboratory sciences building will provide biology majors with the most current technology and techniques. The $8.5 million, 20,966 sq. ft. (1,947 sq m) structure will be available to students of all majors.

“The building will have specialized labs for the science majors, however, all ABAC students will use the general biology, chemistry and the anatomy and physiology labs while they complete their core requirements,” said Johnny Evans, dean of the School of Science and Mathematics. “This is a facility that will engage all ABAC students in studying modern scientific techniques and topics.”

A groundbreaking ceremony was held in June 2015 for the facility, which allows upperclassmen enrolled in the bachelor's degree in biology program to access their research projects 24 hours a day, seven days a week.

“This building is the first step in preparing the School of Science and Mathematics to be a foundation for the growth of ABAC,” Evans said. “This is a lab facility only, and as ABAC grows, this will be phase one of a science and mathematics complex.”

Some classrooms in the aging Gray Hall will be used for mathematics courses, but the first floor labs will all be replaced by modern labs in the new building. All updated equipment for learning about genetics, molecular biology and microbiology will be available for students, with the tissue culture lab being used to prepare plant samples for study.

The Georgia State Finance and Investment Commission is managing the construction process. International City Builders Inc., Warner Robins, Ga., was selected through a bid process to construct the building.

According to Kenna Scragg, vice-president of operations of International City Builders, the biggest challenge on the job involves working on an existing campus, along with tying into existing utilities. In addition, because of the nature of the building, it has a very extensive heating, air and ventilation system.

“Being a science lab building, this facility has an extraordinary amount of mechanical, electrical and plumbing,” Scragg said. “Currently, we are installing science casework and completing utility tie in to casework. The building has been constructed, and we are in the finishing stages.”

The property where the building is located was in fairly decent condition when site work got under way.

“The existing site was a open field area where an existing building had previously been demolished,” said Scragg. “Very little material was needed in preparing the building pad.”

Tasks yet to be carried out include the completion of the science casework installation, along with flooring and commissioning. The most time-consuming part of the work involves the structure's HVAC system. Scragg said coordination on the project was tedious, due to the complexity of the system and its interface with lab equipment.

Heavy machinery being used on this job includes several different types of backhoes, bobcats, mini-excavators and lulls. The early phases of site preparation required a front end loader, track hoe and a small bull dozer. Currently, an articulating man lift is on hand to install glass.

Scragg said, to date, there have been no major setbacks, and weather has not been a major factor during construction of the new building.

Griffin-Folsom Construction LLC of Cordele, Ga., was responsible for site work on the project, which included grading, storm drainage and site utilities. Griffin-Folsom vice-president Rann Folsom said working in a limited space was not easy at times.

“It's a small area, in the middle of an active college, with lots of students around and a lot of unknown utilities,” said Folsom, adding, “The site was used previously as a dormitory, and many existing utilities were unknown. Underground water piping was very meticulous.”

“The biggest challenge on this project was tying our new, pre-insulated underground piping systems into the existing campus loops. The existing systems were installed at least thirty years ago. Therefore, the MEP engineer was unable to confirm, pre-bid, what we were tying in to.

“After several exploratory digs, we found the existing loop intact was an FRP carrier pipe, which had become brittle. The concern was that the pipe would break if we attempted to tie-in using standard procedures.

“To head-off the potential situation of breaking the pipe, flooding the site and shutting down the entire ABAC campus, we decided to install stainless steel tapping sleeves with extra sets of underground valves for a wet tap,” Land said. “These sleeves allowed us to keep the FRP pipe reinforced. It worked like a charm. The added cost was significant, but was a worthwhile safety measure taken by the owner, engineer and Lang Mechanical.”

Work on site started in September 2015. The bulk of the HVAC was completed by the end of February. The lab exhaust and ERU system will not run until the final cleaning is completed. Lang said coordination for this project was crucial.

“The above ceiling space was jam packed with MEPFP systems. When you're putting ten pounds in a five pound sack, coordination is key. Also, we as mechanical contractors commission every system we install, but this project had a commissioning authority [CxA]. The CxA used a new app called CxAlloy that was very user friendly, and was actually an asset to us. It helped us track progress and obtain resolution of open construction issues faster than the standard paperwork punchlist process.

“The design of the duct systems required extensive pressure testing of the four-inch and six-inch pressure class duct systems. The Class 5 fume exhaust system, the stainless steel duct, was especially critical, considering the types of materials that will be exhausted through that lab system,” said Lang.

“Also, we were held up on fabricating and installing the final duct connections to snorkels and fume hoods until the lab equipment vendor got the hoods and snorkels in place for our field measurements,” said Lang.

For school officials, the completed building can't come soon enough. David Bridges, ABAC president, said the structure is being made possible with the support of Gov. Nathan Deal, members of the general assembly and the Board of Regents.

“Projects of this nature don't just happen. We have received plenty of help from the Governor and legislators, as well as Chancellor Hank Huckaby and his staff. We are very fortunate to be able to see this project come to fruition.”

“Seven million dollars of this project will come from the state through general obligation bonds, and we certainly appreciate that,” Bridges said. “The remainder of the project will be funded by the ABAC Foundation, which shows yet again how crucial Foundation support is to this institution.”

“It's a very compact building,” said Melvin Merrill, ABAC director of capital planning. “It's designed to be very efficient. It has an unbelievable amount of usefulness per square foot.”

Dean Rexroth, project manager, IPG Incorporated said, “The exterior design strives to be worthy of its location adjacent to a significant pedestrian node on the campus. The materials, modules and massing are intended to be contextual with the assortment of adjacent building aesthetics, while giving tribute to the three original, historic buildings on the campus.”

The chief concern when designing the building was to get as much instructional space as possible for the state money appropriated. The college has demonstrated the need for as many as 12 to 14 laboratory classrooms. There are seven included.

“The interior of the tower structure contains the entrance lobby, monumental stair and collaborative space on the second floor. These spaces, in conjunction with the exterior plaza, an extension to the adjacent pedestrian boulevard, are destined to be primary gathering areas for the students of ABAC,” Rexroth said.

The building exhibits a number of sustainable characteristics, including regionally constructed materials, high R-values at the thermal envelope, a highly efficient mechanical system and a high level of natural day-lighting. The structure also offers motion sensor switching, LED lighting throughout and enhanced commissioning.

“We hope that students will realize that their time in this new lab sciences building has immersed them into a learning environment which could not be surpassed at any larger, more financially endowed university,” said Rexroth. “From the lab casework to the equipment, audio-visual system and overall interior aesthetic, the building is state-of-the-art.”

Former student Sarah Rooks, who graduated in May with her ABAC bachelor's degree in biology, said, “Frankly, I am a little jealous of the incoming students who will get to use these new labs. There are times when you don't truly learn something until you can put your hands on it and see it with your own eyes. Not only will these students have an awesome space to complete course work, but they'll have space to conduct their own experiments as well.”

Construction of the facility should be completed by July, 2016 so that students can begin using the building during the fall term.