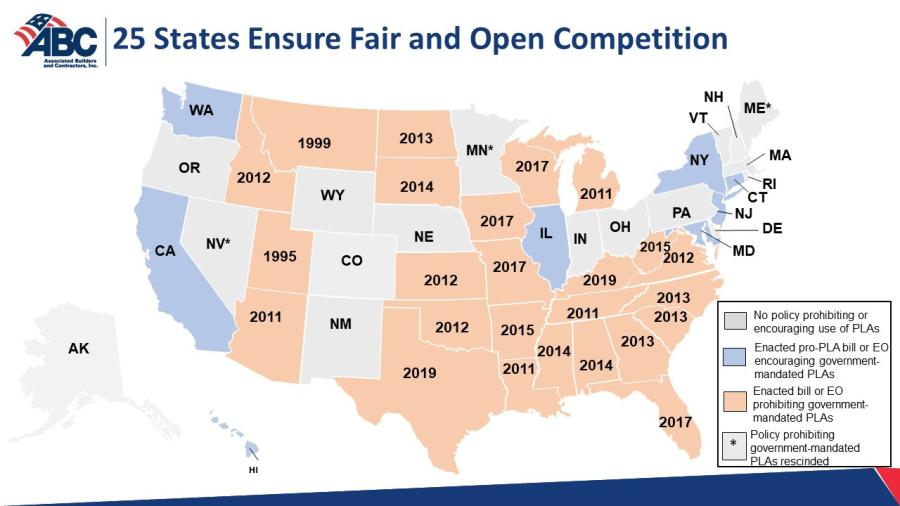 "As Texas continues to attract new businesses and residents, ensuring that investment in public construction is protected from controversial government-mandated project labor agreements allows all of Texas' construction businesses — large and small, union and nonunion — to compete for public work on a level playing field," said Jon Fisher, president of ABC Texas.

The new law invites 96 percent of Texas' private construction workforce who have chosen not to join a labor union to work on projects in their own communities, funded by their own tax dollars.

Government-mandated PLAs typically discourage competition from qualified local businesses by forcing contractors to recognize unions as the representatives of their employees and hire most or all employees from union hiring halls and union apprenticeship programs. Employers also must follow union work rules and pay into union benefits and multi-employer pension plans, in addition to any existing company benefit plans, putting them at a significant competitive disadvantage.

Government-mandated PLAs can raise costs by 12 to 18 percent compared to non-PLA projects, which results in fewer public works projects and reduced construction industry job creation. A May 2017 study by the Beacon Hill Institute, "Project Labor Agreements and the Cost of School Construction in Ohio," found that PLAs raised the base construction cost of building Ohio schools by 13 percent, or $23 per square foot in 2016 prices.

"Congress and the Trump administration should follow the lead of Texas and 24 other states by immediately enacting a similar policy that will maximize competition, reduce costs and guarantee the fiscal accountability taxpayers deserve on federal and federally funded construction projects," said Ben Brubeck, ABC vice president of regulatory, labor and state affairs.

In 2009, President Obama signed Executive Order 13502, which strongly encourages government-mandated PLAs on federal construction projects and permits state and local governments procuring federally assisted construction contracts to mandate PLAs. ABC and a coalition of construction and industry stakeholders have petitioned President Trump to rescind the Obama order and issue an executive order similar to President Bush's Executive Orders 13202 and 13208, which prohibited government-mandated PLAs on federal and federally assisted construction contracts worth hundreds of billions of dollars.