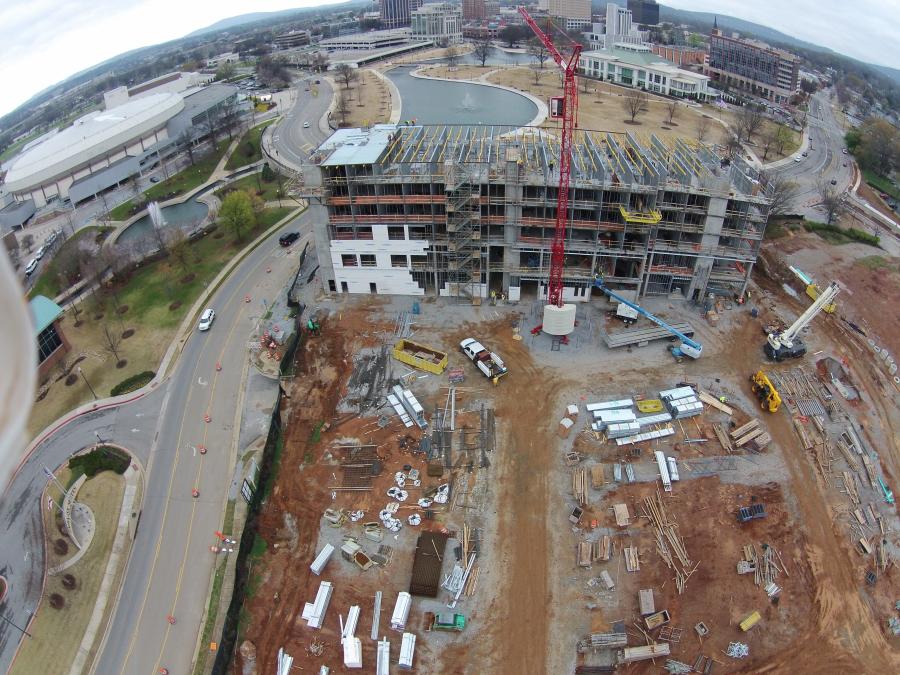 A $100 million, mixed-use development in Huntsville, Ala., is finally becoming a reality. The long-delayed project, known as CityCentre at Big Spring, will include 30,000 sq. ft. of retail and restaurant space, surrounded by upscale apartment homes and a 125-key AC Hotel that opens later this year.

“CityCentre sits in downtown Huntsville on the former site of Holiday Inn, which has been closed since 2013,” said Max Grelier, co-founder of RCP Companies. “Mayor Tommy Battle says the property, located just a few steps from Big Spring Park, the Von Braun Center and Huntsville Museum of Art, is one of the city's most attractive opportunity sites. Battle calls it a phenomenal location, and [he] wanted to see redevelopment proposals that will bring excitement to our community, and even more energy to the downtown area.”

The economic impact of the development is expected to be significant. CityCentre will reportedly provide hundreds of jobs and is considered a significant addition to the Rocket City's downtown community.

As grading continues throughout the property, the focus for now is on the new hotel that's inching closer to completion. 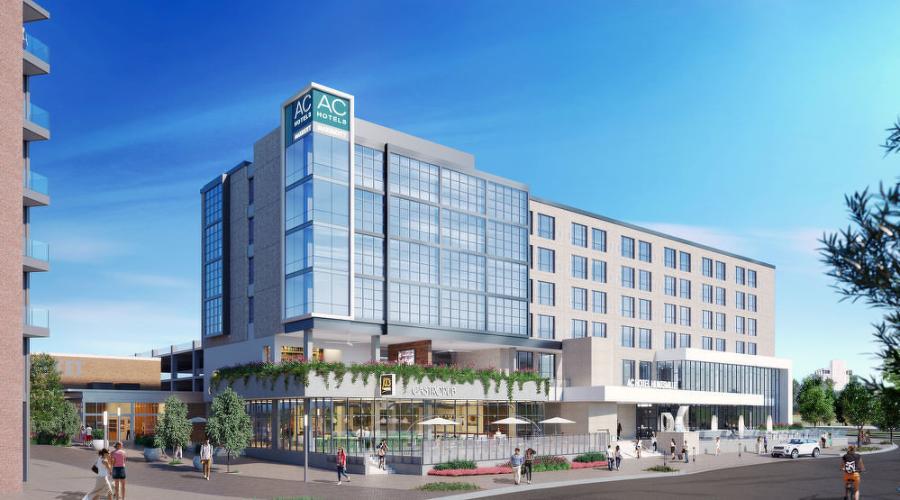 “The six-level AC Hotel will serve the magnitude of tourists that want to stay in an international acclaimed hotel brand. Guests visiting Huntsville will be able to engage with the locals at The Gemini Kitchen + Cocktail and the second-story terrace Veranda Bar. The Gemini will be an approachable polished-casual restaurant for those looking for an affordable, quality dining experience.”

Located on Williams Avenue between Monroe Street and Lowe Avenue, CityCentre has been years in the making.

Despite the late starts, Grelier said it's rewarding to have work well underway, with more construction to come.

“The delays last year were due to an internal impact study by Marriott, which determined the property will not pose an unfair competitive advantage over other Marriott brands in the city. Since then, construction has been proactive, with the topping off of the hotel this quarter making for an exciting celebration. We are looking forward to construction completion and engaging the community with the openings later this year.”

The hotel was the 10th signed U.S. location for AC Hotels, a global joint venture with Spanish hotelier Antonio Catalan. Yedla Management Company, which owns and operates Starwood, Marriott and Hilton franchises, will run the property.

“The hotel will be customized for Huntsville and will result in the delivery of a special experience that resonates with the local market and embodies a unique personality within the brand. Guests can look forward to modern rooms, an AC Lounge area, kitchen with self-serve European fare, Wi-Fi everywhere, mobile check-in and check-out and a 24-hour fitness center.”

According to Grelier, the Huntsville community has fully embraced the project.

“CityCentre at Big Spring is one of the city's most anticipated projects in a year of exponential commercial growth across the whole metro area. The anticipation is real.”

“We're going to see some great things out of this project,” Mayor Battle said at the groundbreaking. “But really, this comes down to one thing: It makes our city just a little bit better place. It makes us a beautiful city.”

The theme of CityCentre is “Upscale in Downtown,” which Grelier called a fitting slogan.

“Downtown Huntsville is undergoing significant rejuvenation, and the international AC Hotel brand will be a great addition to the global market in Huntsville. Local residents and tourists will be able to enjoy an upscale memorable experience in downtown Huntsville, in a socially engaging environment.” 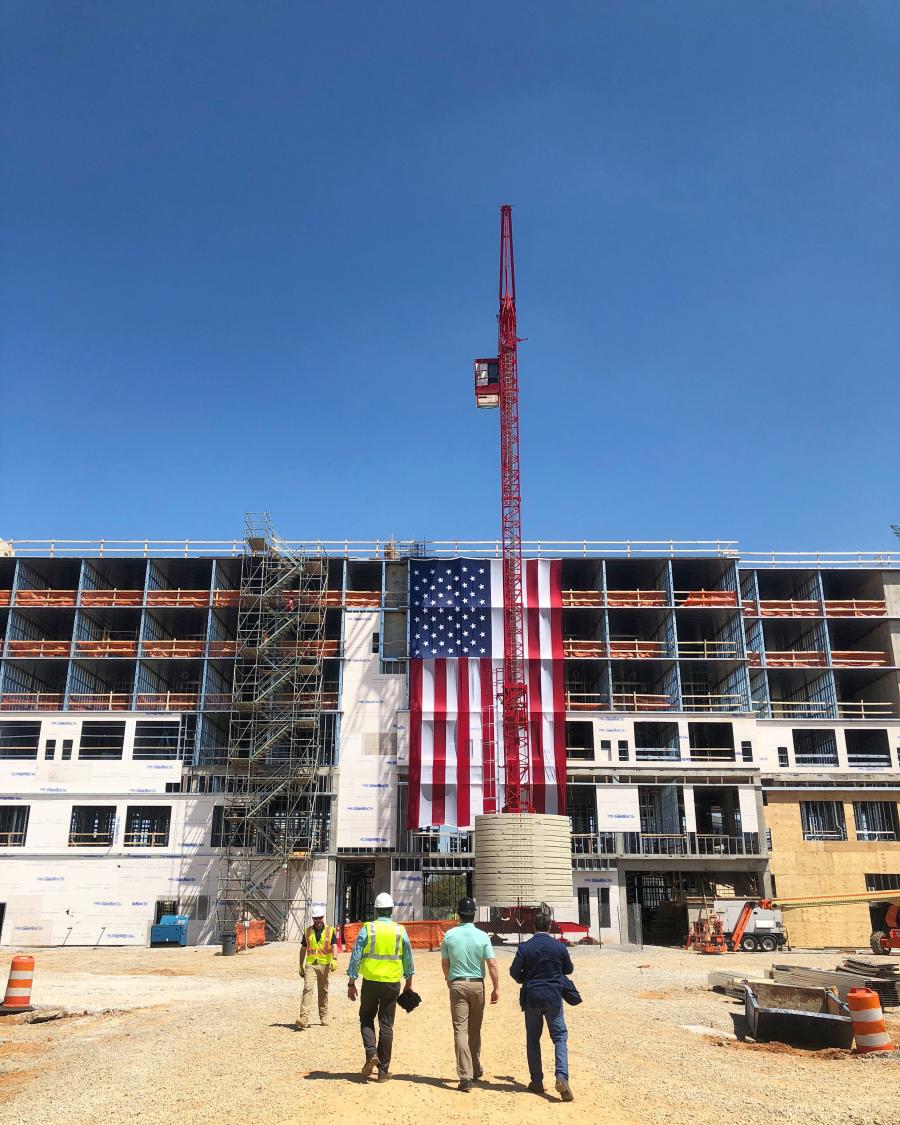 With construction commencing this fall, Phase II will include 280 units of multi-family residential, retail and office space, and an artisanal food hall. Pre-leasing for the residential units will be available starting late spring 2019. Grelier said the development's appeal is undeniable.

“The entire educated workforce, not to mention the science, technology, engineering, art and mathematics professionals, provide built-in demand for the eclectic-yet-authentic blend of live, work, play, shop amenities we have planned for CityCentre. CityCentre will be a critical piece in Huntsville's revitalization efforts of downtown. Its architecture will be locally inspired, with pedestrian crossings, bike pathways, spacious walkways and a linear park connection to nearby urban developments.

“CityCentre fills a void of services and entertainment options that the city's underserved daytime population and workforce, as well as the abundant patrons of Von Braun Civic Center and Big Spring Park, have been seeking.”

Owner of the property is City Centre I LLC. The architect is HC Architecture of Atlanta. Batson-Cook Company serves as the general contractor for the new hotel.

According to Tom Underwood, Batson-Cook project executive, “We are responsible for the hotel building, hardscape and landscape surrounding the building to the back of city sidewalk at Williams and Monroe, the back of curb on new private drive and the edge of sidewalk between the parking and hotel.

“As with any project, challenges were encountered; however, all parties have come together to provide solutions and work through them, forming a great team. Challenges on this project include difficulty with the PT stressing. Some of the post tension cables in the second and third level slabs required stressing on both ends. The installing trade contractor initially pulled from one end, the testing company had an inexperienced inspector that initially provided inaccurate reports.”

Underwood said the team came together with the designers, trade contractor, supplier, owner and Batson-Cook to solve this issue.

“The trade contractor verified all cables were pulled per the design in both directions, Batson-Cook recommended a local testing firm that provided accurate measurements and reports on short notice, the EOR provided direction to destress and restress several of the tendons. Upon performing these actions, several cables broke during the restressing. The supplier sent crews out to repair the damaged cables, and final acceptance of the floor was accomplished.”

Brick relief angle also has been a concern.

“The design called for a four-inch brick relief angle, where a five-inch face of stud to face of brick was required, allowing zero tolerance for the concrete or steel. The design also called for a six-inch edge of slab angle for a five-inch thick slab, causing the angle to be higher than the slab. The edge of slab angle on the metal deck slabs was installed with screws in lieu of welding, which along with an imperfect installation, led to the edge of slab angle not being straight, as well as not plumb from level to level. The team arrived at a detail to shim the brick relief angle with 3 by 3 inch tube cut to the required varying lengths in lieu of stacking shims.”

In addition, final utility tie-ins had to be addressed.

“The initial site grading and utilities were contracted directly with the owner prior to our mobilization. There are some portions of the utilities in the city ROW that are being performed directly by the city, which must be designed and publicly procured. The initial plan was to have these utilities completed early in the project.

“With designs changing between the hotel and city scopes and availability of the site contractor, this extended the final roof drain and sanitary tie-ins, impacting the riser testing and inspections. The permanent power was a challenge, due to changes in the load for future development, layout, surrounding structure, grades at the transformer and the process of the local utility.” 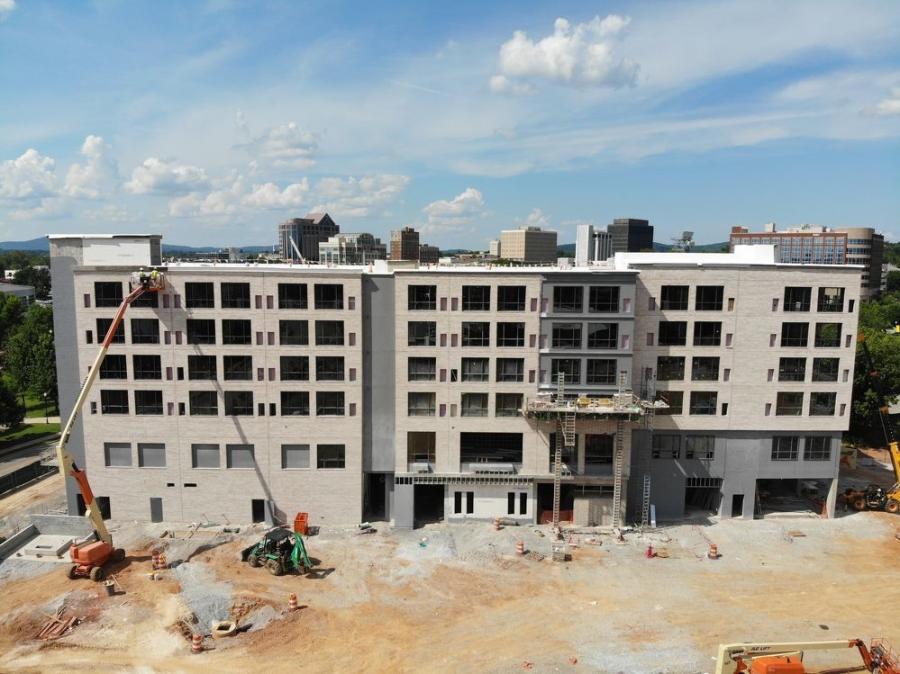 Mobilization of the site and deep foundations began at the end of July 2017.The structure, the exterior framing, sheathing and membrane barrier, roof, interior framing and MEP rough-in are 75 percent finished. Work on the exterior skin, the brick and windows is nearing completion. EIFS and metal panels have recently begun.

On the interior, MEP trades are performing rough-in and getting inspections to close up walls. Drywall hang and finish is underway on the third and fourth floors. Key tasks yet to be carried out include: completion of permanent power, installation and start-up of common HVAC units and elevators.

Main equipment being used on the job has included: an 80-ton rubber tire crane; a pedestal tower crane; a 12,000-lb. lull; a skid steer; and a backhoe.

The building will have an exterior of brick, glass, stucco and metal panels. The first two levels of the structure will be cast-in-place, post-tensioned concrete flat slabs, with the top four guest room levels a cold-formed steel, load-bearing wall system. A combination of VRF and split DX mechanical systems will be installed.

As far as constructing a cold-formed steel, load-bearing wall system for the upper floors, “The Infinity wall system is made up of prefabricated walls with 14-gauge framing members,” said Underwood. “These walls make up the room separator walls. The Epicore decking is then placed over the bearing walls and a five-inch concrete deck is placed over it. There are also miscellaneous steel angles required around the decking and at concrete walls such as stairs, elevators, etc. for support.”

Underwood said the elements have not been a significant issue, to date.

“We have encountered some weather days due to rain and snow. Now that the building is dried in, we do not anticipate the weather being a factor.

Underwood added, “It is an honor to work on this great AC Marriott in downtown Huntsville where I grew up, and my family still lives.”

Construction of the hotel is set for completion in November 2018.