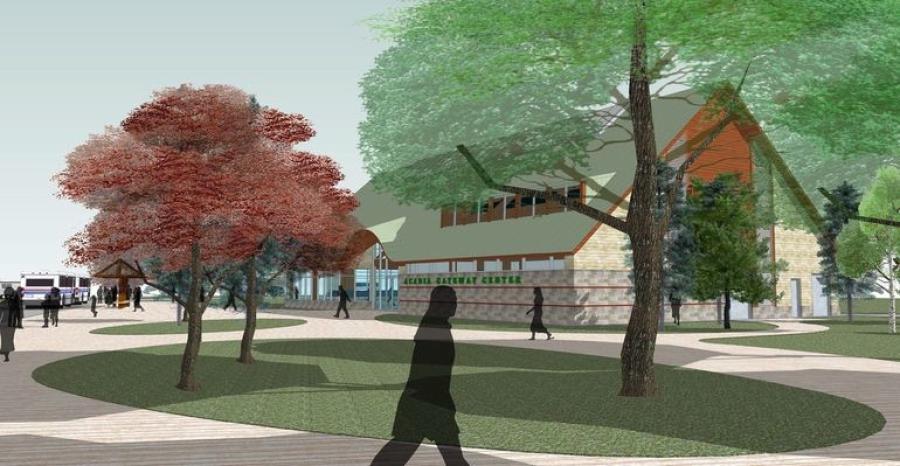 A rendering of phase-two construction of the Acadia Gateway Center in Trenton. (National Park Service rendering)

The National Park Service (NPS) is poised to start the second phase of construction of its Acadia Gateway Center, on Route 3 in Trenton, Maine, due to a $9 million infusion of cash from the federal government.

Phase One of the center, completed in 2012, was a bus maintenance facility, park-and-ride lot, propane fueling station, access road and administrative offices for Downeast Transportation, the nonprofit operator of the Island Explorer shuttle bus system and countywide transit systems.

Planners have moved the project from concept to preliminary design. Phase Two construction is expected to take place from 2021 to 2023, according to park documents.

It will include a visitor center, a pedestrian plaza, bus berths and circulation areas for Island Explorer and commercial tour buses to line up. Level 2 electric charging infrastructure will be installed for future charging stations.

The location will sell park passes and provide information on the park, bus routes and schedules, recreation opportunities, as well as books and maps, and information on tourist amenities.

A waiting room is designed with an expanse of glass so visitors can keep an eye out for their bus.

Located southwest of Bar Harbor, Acadia National Park is made up of 49,000 acres along Maine's picturesque and rocky Atlantic coast. The park preserves about half of Mount Desert Island, many adjacent smaller islands, and part of the Schoodic Peninsula.

When completed, Acadia Gateway Center is expected to benefit local and state economies, as well as address severe transit deficiencies in the region, according to a news release from the office of Maine's U.S. Sen. Susan Collins, which announced the fund as part of a $10.2 million package to be administered through the FTA's Grants for Buses and Bus Facilities Program.

The project got its start in 2007, when Friends of Acadia purchased the 369-acre Crippens Creek property in Trenton and sold approximately 150 acres to the MaineDOT to carry forward the center's construction, according to the non-profit's website.

Overall, the Acadia Gateway Center Phase 2 project is designed to:

John Kelly, Acadia Gateway Center's management assistant, told the Acadia Advisory Commission during its virtual meeting Sept. 14 that the project's funding status was 82.6 percent secure, including $12.4 million from the Federal Transit Administration (FTA) and $5.5 million from the MaineDOT. The needed 17.7 percent of monies needed to fully pay for Phase 2 of the center were pending at that time, Kelly explained, including $4 million from the National Park Service.

"The Acadia Gateway Center has moved ahead by leaps and bounds in the last year," he said, adding "The $12.4 million from the [FTA] pushed it into reality. It's just a matter of getting the National Park Service funding in place, which we hope to do in the next few months." 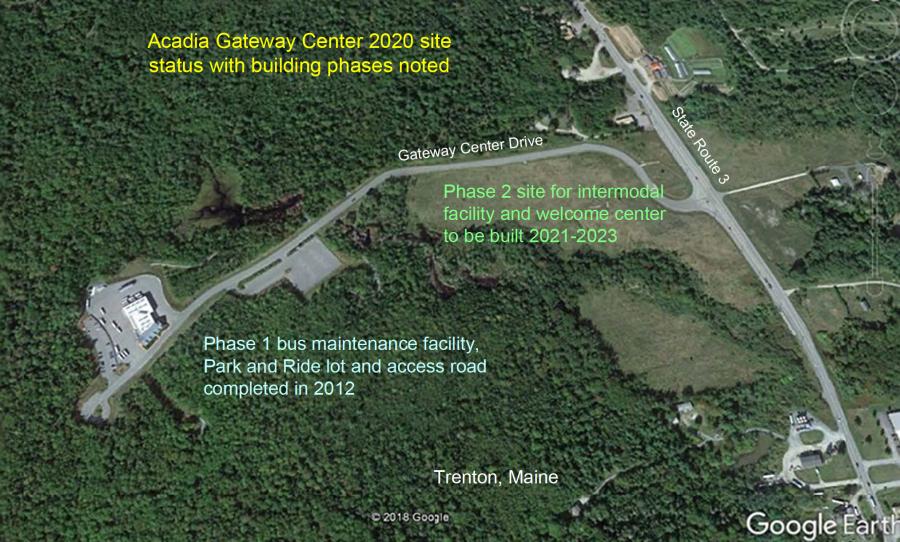 A bus depot and maintenance facility was completed in 2012 for Downeast Transportation, which runs the Island Explorer, a popular seasonal shuttle system for Acadia National Park. (National Park Service map)