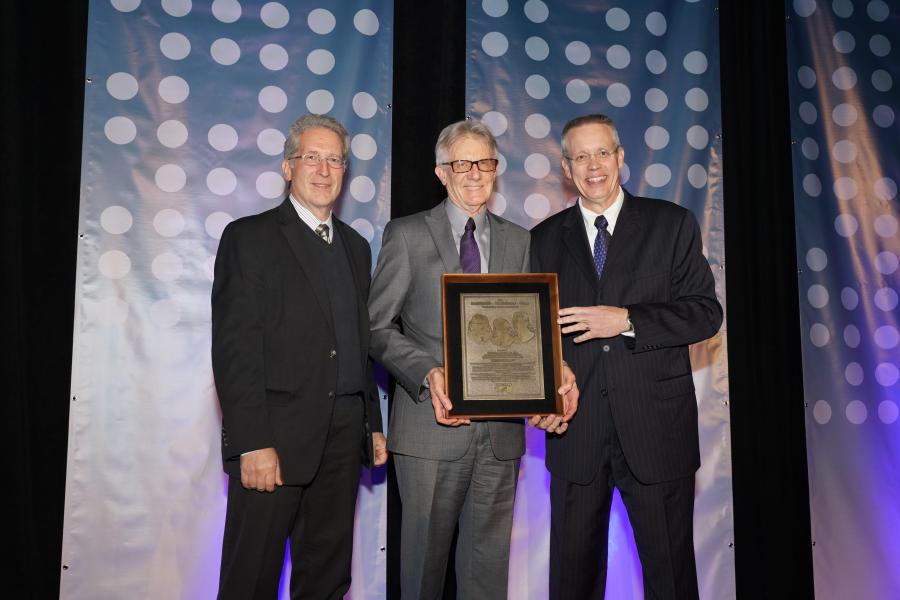 (L to R): Mark B. Snyder, Michael I. Darter and Gerald F. Voigt share a moment after Darter was presented with ACPA's 2017 Hartmann-Hirschman-Egan Award. The award is ACPA's highest order distinguished service award.

The American Concrete Pavement Association presented its 2017 Hartmann-Hirschman-Egan (HHE) Award to Michael I. Darter, principal engineer of Applied Research Associates Inc. and professor emeritus of the University of Illinois.

The award recognized Darter for his innovation, leadership, teaching and mentoring in the field of civil engineering, as well as for his advancement of technology that has resulted in countless numbers of high-quality concrete pavements.

“As an authority on design, construction, rehabilitation and management of concrete pavements worldwide, your contributions have been innumerable, far-reaching, and enduring,” said ACPA President and CEO Gerald F. Voigt.

Voigt, along with many others in the concrete pavement industry, have been students, colleagues, or mentees of Darter.

Darter's 40-plus years of consulting, research and teaching have resulted in a legacy of exceptional pavement engineers and in engineering tools used in all facets of concrete pavement design; evaluation and forensic analyses; performance prediction modeling; performance-related specifications; life-cycle cost analysis; and rehabilitation procedures.

“Among the most noteworthy is your achievement as principal developer of the AASHTO Mechanistic-Empirical Pavement Design Guide, the most comprehensive tool for concrete pavements in history,” Voigt said. “Your contributions continue to make profound, positive differences in the quality and longevity of pavements. Equally important, your unique style of teaching has not just transferred knowledge, but also inspired many engineers to follow the pathways you created.”

At the presentation ceremony, Voigt was joined by Mark B. Snyder, president of Pavement Engineering and Research Consultants Inc., in paying tribute to Darter. The ceremony also included visuals of quotes from a wide-range of industry and public-sector officials, all of whom represent just a small number of the many professionals who have been students of, worked with, or were otherwise inspired by Darter.

In addition to his distinguished service to the concrete pavement industry, Darter also is the author of “Gone with the Wind, He Said: The Cold Case Search for My MIA Brother” and “Fateful Flight of the Lonesome Polecat II.”

These individuals demonstrated leadership and tireless dedication to the concrete pavement industry, which helped shape the ACPA and the industry it serves. The award is presented to individuals or groups that demonstrate the same level of dedication as Hartmann, Hirschman and Egan.