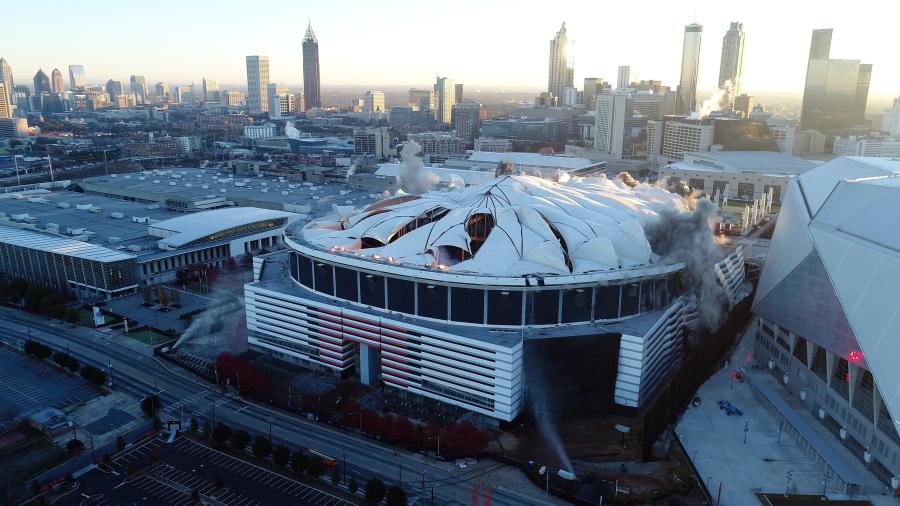 Adamo was brought in to demolish the 71,000-seat Georgia Dome.

Brought in from Detroit, Mich., by the Georgia World Congress Center Authority (GWCCA) to demolish its 71,000-seat Georgia Dome, the Adamo Demolition Company perfectly executed the implosion of the stadium — in 12 seconds — that was built in 1992 as the home stadium for the Atlanta Falcons football team.

When the Dome opened in 1992, it was the largest covered stadium in the world and featured the largest cable-supported fabric roof. It was constructed at a cost of $214 million by the state of Georgia.

The dome hosted the 1996 Summer Olympics, as well as two Super Bowls and the NCAA Men's Final Four, and over its history, welcomed 37 million guests and generated more than $7 billion in economic impact. The final public event — the Monster Jam — was held on March 5, 2017.

“The Georgia Dome was an iconic, game-changing venue,” said Holly Richmond, the GWCCA's director of communications. “It made Atlanta, and the GWCCA's downtown campus, a destination for every big event. It forever changed Atlanta and the state of Georgia's cultural, architectural and economic landscape.”

The cleanup operations are under way and should be finished in mid-February, which then sets the stage for the development of a 1,010-room high-end hotel to serve attendees at conventions held at the adjacent Georgia World Congress Center. The site also includes a 600-spot parking facility, a Home Depot Backyard 13-acre green space specifically designed for game day tailgating at Mercedes-Benz Stadium and for a variety of community uses.

“The addition of the hotel to our campus will help Atlanta capture new convention and entertainment business, increasing revenues and creating jobs both during construction and once the hotel becomes operational,” said Richmond.

The implosion, which occurred at 7:30 a.m., yielded more than 250,000 cu. yds. of concrete, steel and fiberglass. The setup for the demolition was meticulous, requiring 4,800 lbs of explosives, nearly 6 mi. of detonating cord, 1 mi. of electrical wire connections and close to 10,000 hours of preparation. Massive blast walls, which surrounded the stadium, provided protection to the Mercedes-Benz Stadium, which was 83 feet away, and the Georgia World Congress Center, the closest point being 55 ft. away. The new stadium, built over three years, opened last August.

Lauren Stewart, an assistant professor of Georgia Tech's School of Civil and Environmental Engineering, considered to be one of the country's leading blast experts, witnessed the demolition and was satisfied.

“We saw the different detonation points go off, heard the blasts and saw the structure come down,” she said. “That's how it's supposed to go, and it looks like it went pretty much as planned.”

Richard Adamo, the president and owner of Adamo Demolition, personally pressed the button that brought the Dome down.

“We were officially on site in mid-June,” he said. “We started doing the prep work for the blast — stripping out the building and exposing it so that the blasters could set the charges. The entire project will be recycled on site.”

Prior to the demolition, many items from the stadium, particularly those associated with the Falcons were removed and auctioned.

The teflon roof of the stadium was made of reinforced concrete.

“The demolition went according to plan, a testament to the planning that we put into the project,” said Adamo. “Any time that any job goes as planned and expected, you're always happy. Not only did we have the adjacent structures to be concerned about, but the MARTA [Metropolitan Atlanta Rapid Transit Authority] rail line 13 ft. away from the foundations of the Georgia Dome and Gate E of the stadium abutted right on to Magnum Street.

“One of the driving factors that we selected for the implosion method was the schedules,” he said. “There was an aggressive schedule to get the Dome down, including the opening of the new stadium. The project was supposed to start last March with an implosion in July, but they postponed it. We moved our schedule ahead by four months — they had some issues with the opening of the new stadium and wanted to make sure that if something didn't go as planned, that the Dome could be utilized in an emergency.”

The HHRM retained Thornton Tomasetti, who had designed the original Georgia Dome structure, to review Adamo's plan, including 3-D computer mock-ups, a process that began in November 2016. The green light was given in January 2017.

The cleanup/recycling operation began the day after the implosion, following post-implosion inspections. Adamo provided assistance with the inspections.

“We're basically working around the clock, Monday through Saturday, with two shifts,” said Adamo, “and we'll be substantially complete by mid-February. We have several hydraulic excavators on site with multi-hydraulic tools — shears and breakers, mechanical processing tools such as pulverizers. The bulk of the recycling is being done with a concrete crushing plant.

“Every day we're constantly sorting and segregating the concrete, rebar, structural steel, and any of the non-ferrous materials we come across,” he said, “and materials are picked up daily.”

Concerns put forward by the stadium and congress center are being addressed during the demolition, and communications is the key to dealing with them.

“We just address on the spot,” said Adamo. “There is going to be some noise because we're using hydraulic breakers and big excavators — 15 to 18. Some of the noise is being absorbed as were basically 30 to 40 feet below grade in a big bowl.”

He also praised the team effort within the company's ranks.

“We had enough time that we didn't have to knee-jerk react — we were able to plan this thing out accordingly,” said Adamo, “and evaluate how we were going to man and equip this project. Once you had a fixed date for the implosion, you knew exactly what would follow.”

“I was organizing and planning this from the start and I'll be here until it is finished,” said Rick Cuppetilli, Adamo's executive project manager, “and will be there until it is finished. All the pre-planning has paid off. We haven't hit any surprises, other than the delay in the implosion date. It's not the biggest project I've been involved in, but it's the most intricate.”

Adamo said that this project is probably the most high profile project the company has tackled due to the adjacent buildings and the downtown location.

“It's the only structure like this to be demolished because the roof structure was unique.”

Each shift consists of about 20 people, which is led by key personnel, management and operators, from Detroit.

“We were very fortunate to pool from the local trades —laborers and operators,” said Adamo, who noted that on average day, 4,000 tons of material can be recycled on the site.

Equipment plays a crucial role in the work, and the equipment from Adamo's fleet was shipped from Detroit to Atlanta.

“We have specialized tools that some of the rental houses don't have,” said Adamo. “Within our fleet, we have all the tools needed to do this magnitude of heavy concrete demolition, so it made sense to end it down to the job.”

The vehicles and equipment were shipped by Adamo's lowboys and tractors, with the larger pieces taken apart for the transport. Yancey Bros., the Cat dealership in Atlanta, is playing a pivotal role regarding the equipment.

“We had a brand new Cat 390FL excavator with a Cat MP 40 multiprocessor shipped directly from the factory,” said Adamo. “It was stripped down and put back together by the dealership.”

The work is dealing out serious wear and tear.

“It's a typical heavy concrete structure,” said Adamo, “so we're going through teeth and blades on the pulverizers; and the shear blades that cut the re-rods. We have a couple of machines out there with excavator buckets that the teeth are getting worn out. We have a full-time Cat mechanic on site that is doing our preventative maintenance — dealing with blowing out radiators and dust issues.

“Yancey Bros. has been extremely supportive,” he said. “They have a full-time certified mechanic on-site and any time a little problem happens, it is addressed before it becomes a big one, thus minimizing our down time — it's great. If the issues get a little bigger, they'll send in another support technician.”

“We're experiencing the same type of maintenance that we would have in Michigan with our own local dealership — Michigan Cat,” he said. “We refer to it as an 'onsite labor agreement.' They supply us with their technicians and service trucks. If a problem comes up, they plug in the computer and determine what is wrong or which part needs to be replaced.”