Adding Capacity the Goal of I-10 Projects 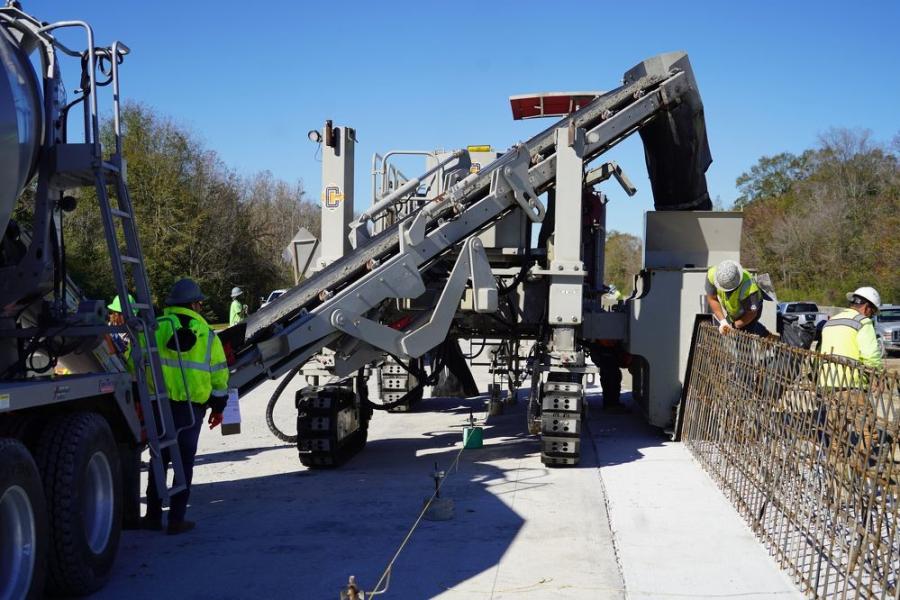 The Power Curber 7700 is a paving machine that forms concrete into a barrier rail. The concrete is extruded from the truck, travels up the conveyor belt and into the chute, where it is formed into the rail.

Road construction crews are hard at work across the state of Louisiana on several projects to improve Interstate 10, one of the South's busiest vehicle and freight corridors.

In the Bayou State, the highway stretches 274 miles across the lower third of Louisiana from the Texas border east through Lake Charles, Lafayette, Baton Rouge and New Orleans, before turning northeast to Mississippi.

Built in stages throughout the 1960s and ‘70s, I-10 rapidly became an essential road for residents and travelers alike. But the Louisiana freeway also serves as an important part of a coast-to-coast interstate designed to efficiently move freight across the country from Jacksonville, Fla., to Los Angeles.

And when hurricanes move up through the Gulf of Mexico and strike the low-lying state, as has happened frequently in recent years, I-10 becomes an evacuation route for folks trying to get out of harm's way.

Fitness of I-10 Vital to Louisiana

Almost from its beginnings, the interstate has been a congested highway — and not just around the larger cities. That factor, along with the pounding I-10 has taken from massive storms and the hot, humid climate, has meant the freeway is in desperate need of rehabilitation in many areas. Indeed, some parts of I-10 require constant maintenance. 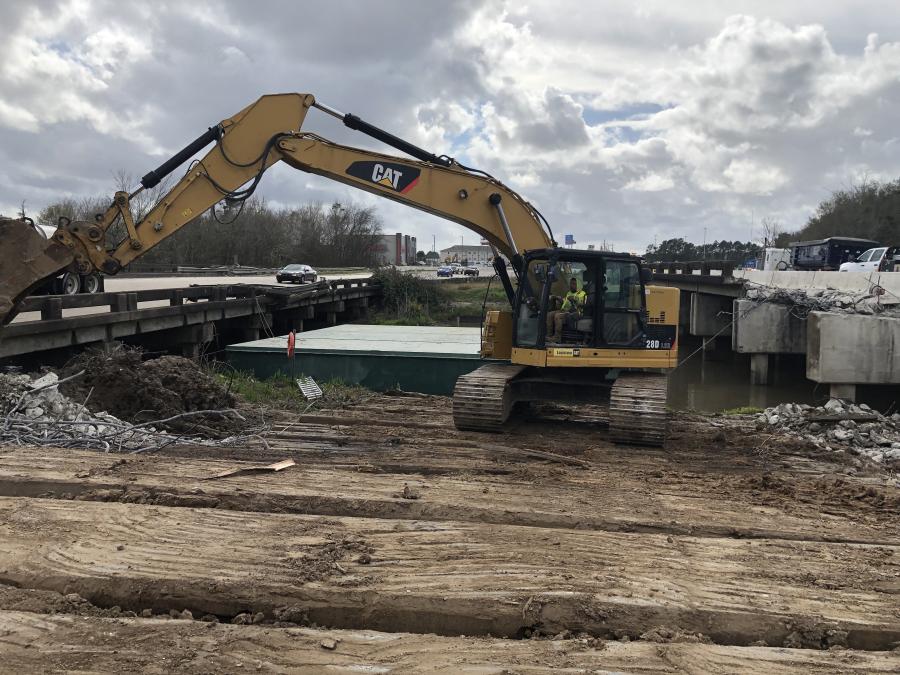 Therefore, keeping I-10 in top form is vital to keeping the public safe and preserving the state's economic well-being.

Currently, the Louisiana DOTD has contracted with various local builders to make I-10 improvements, including increasing vehicle capacity in several locations. At other work zones along I-10, contractors and their subs are performing asphalt resurfacing, pouring concrete, improving drainage, reconditioning bridges and overpasses, as well as handling striping and signing.

A closer look at two I-10 building projects — one in the west and another in the east — illustrates the importance the DOTD places on keeping the interstate free flowing for both people and goods.

In October, the DOTD announced that work had begun on improving both I-10's capacity and its roadway in Calcasieu Parish, along the Texas border. Located southwest of Lake Charles, the length of the project is only 2.45 mi. long, but is part of the route that has reached the end of its service life and requires frequent maintenance, explained Tammy York, public information officer of the DOTD's Lake Charles District.

Major construction started in January on the I-10 Calcasieu work zone and encompasses the route just west of the LA 108 interchange and continues east to the I-210 interchange. Road capacity will be achieved by widening I-10 eastbound and westbound to four lanes between the two interchanges, including a new auxiliary lane. Twelve-foot shoulders also will be installed in both directions on the inside and outside lanes. 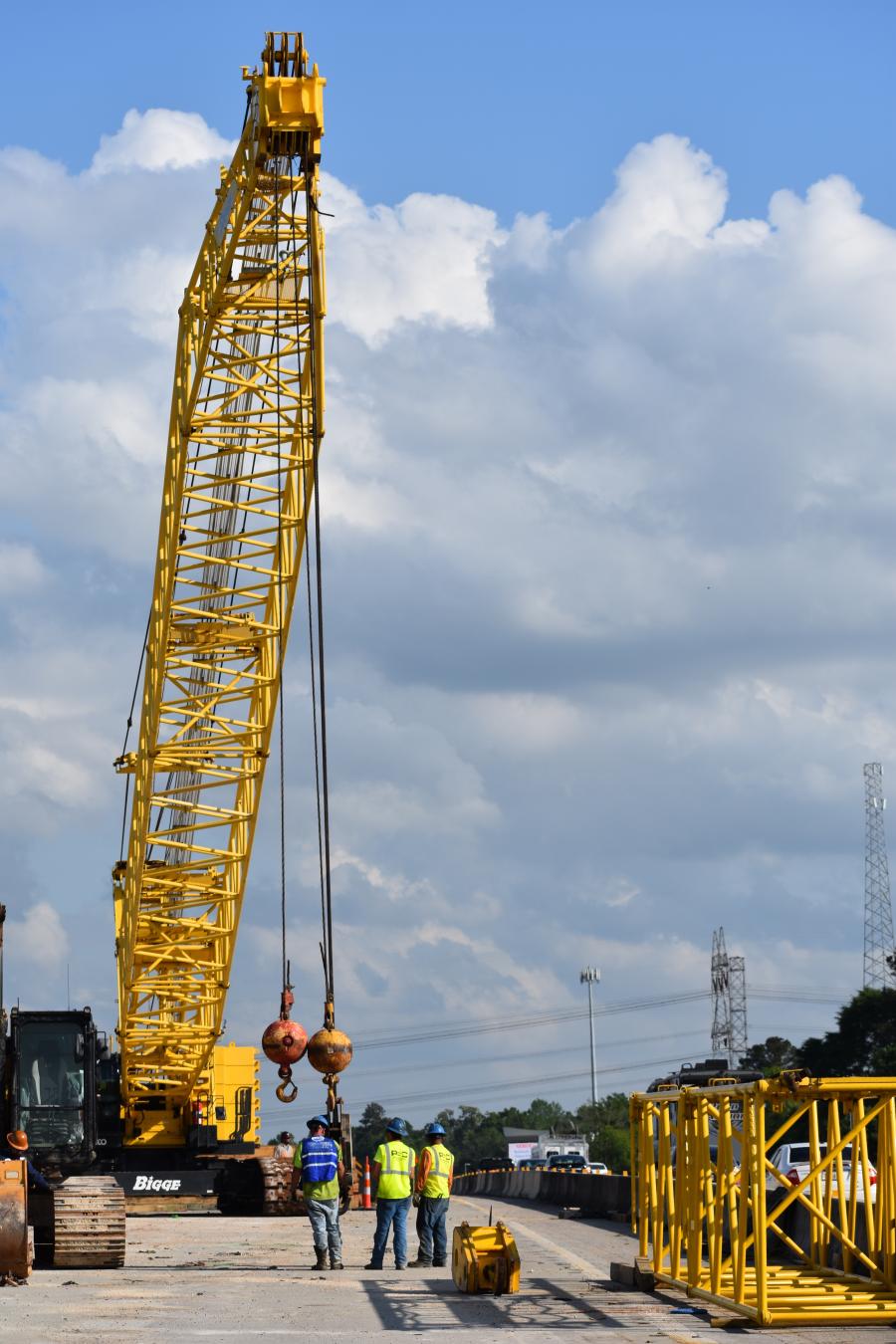 Along its path, I-10 crosses Maple Fork, a stream that flows through the area. Bridge crews are in the process of replacing the twin 200-ft. spans over the water. And, with more frequent hurricanes and heavy rain in the area, each bridge will be raised above the 100-year flood elevation, allowing continued operation during high water events.

The concrete sections west of Maple Fork to LA 108 will be fully reconstructed and replaced, and the existing asphalt pavement east of the stream will be milled and overlaid to improve the service of the roadway.

"With the installation of an auxiliary lane in both directions of I-10 between the LA 108 and I-210 interchanges, motorists can access those highways without having to enter the I-10 mainline traffic," York said. "The additional capacity will help to alleviate congestion on the already heavily traveled roadway.

"By reconstructing the concrete section and rehabbing the asphalt part of the I-10 roadway, everyone — residents, freight haulers and travelers — will experience a much smoother journey with increased capacity and minimal maintenance delays."

The $45.5 million contract was awarded to Gilchrist Construction, based in Alexandria, La. Six other Louisiana subcontractors are working on the project, as well as one from Mississippi and another located in Arkansas, York said.

The I-10 Calcasieu upgrades are anticipated to be complete in the summer of 2021.

"The challenges we are dealing with now on the project are the high volume of daily traffic through the work zone and maintaining two lanes of traffic both directions," she added.

Project Beginning to Pick Up Speed

In the last week of April, York reported that the westbound service road had already been widened and striped for interstate traffic, while I-10 westbound traffic at the LA 108 interchange had been shifted to the service road so that the contractor can begin the reconstruction of the concrete sections. Also, the temporary signals on LA 108 northbound and southbound are operational and the necessary ramps have been closed for the traffic shifts. Pile-driving for the bridge replacements at I-10 and LA 108 are ongoing, too, she said.

The job of moving dirt, driving pile and putting down asphalt and concrete on the I-10 project includes:

York said Gilchrist Construction is using its own equipment to perform its tasks. The contractor's rolling stock on the I-10 project includes multiple Cat and Komatsu excavators ranging from 7,500 to 81,900 lbs. On hand, too, are Link-Belt 80- and 200-ton cranes.

I-10 Widening the Goal in Baton Rouge

Further to the east, straddling East Baton Rouge and Ascension parishes, is a similar I-10 improvement project with many of the same objectives as the one near Lake Charles. This interstate work, which began construction in February 2018, is currently rounding the home stretch toward the finish line this fall, reported Brandie Richardson, the PIO of the Louisiana DOTD in the area.

The concept of this $72 million design-build contract was to widen I-10 from four to six lanes on the southeast edge of the city of Baton Rouge, just west of Highland Road (LA 42). From that point, the roadwork extends 6.5 mi. south-southeast to the LA 73 interchange in Ascension Parish. Plans also called for replacing the two bridges that made up the I-10 overpass above Highland Road with a single large overpass, as well as making improvements to two other spans further south. 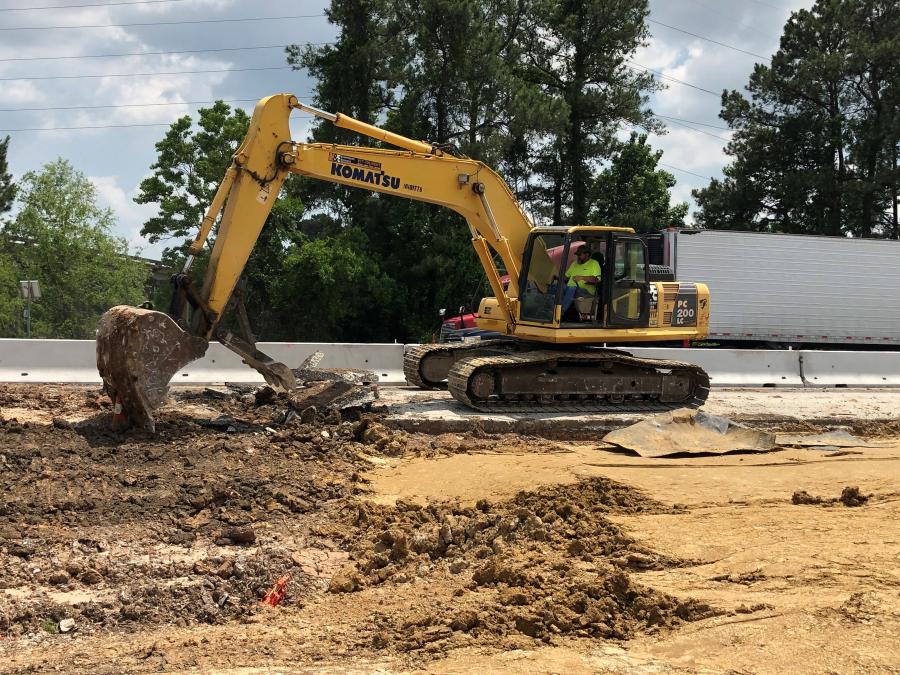 Baton Rouge-based James Construction Group (Primoris Heavy Civil) serves as the prime contractor. Other companies on this I-10 improvement project include Sigma Consulting of Baton Rouge, the designer of the roadway; Lafayette's Huval and Associates, the bridge engineer; Command Construction of New Orleans built the concrete median barrier; and C.E.C. of Lafayette installed the structural steel on the bridges.

By the first week of May, an additional lane and wider shoulder had been added to both the eastbound and westbound directions of I-10 from Highland Road to LA 73. The interstate overpasses across Highland Road have been removed and replaced with a 135-ft.-wide by 310-ft.-long bridge designed to carry six lanes of I-10 traffic and featuring widened inside and outside shoulders. The main structure across Highland Road is 190 ft. in width to provide for expanded road capacity in the future.

Just south of the Highland Road overpass site, crews repaired the Bluff Road bridge (LA 928) over I-10 to replace a damaged girder and raised the bridge to meet updated interstate standards. Also, at the East Baton Rouge/Ascension parish line, the I-10 river bridges over Bayou Manchac have been widened to accommodate six full traffic lanes.

Richardson described the widening of I-10 in East Baton Rouge and Ascension parishes as a priority project for Louisiana.

"With the full support of the U.S. Department of Transportation and Gov. John Bel Edwards, we're able to utilize the innovative design-build method to move us one step closer to reducing congestion and enhancing safety along this well-traveled freight corridor," she said. "Investing in this section of I-10 will improve the safety and efficiency for the more than 95,000 motorists who travel this segment every day.

"This roadway frequently experiences slow traffic during morning and afternoon commutes as people travel between Baton Rouge and the growing suburban areas of northern Ascension Parish," Richardson continued. "I-10 is also part of the main route between Baton Rouge and New Orleans, making it one of the busiest surface freight routes in the state."

James Construction and its subs brought in many pieces of prime heavy equipment to reshape the I-10 project near Baton Rouge. Richardson listed Cat dozers, excavators and motor graders among the equipment on the I-10 upgrade, in addition to a Manitowoc 14000 crane, a Kobelco CK 1600 crane and Gomaco pavers.

She also noted a few other construction facts and figures about the project:

"Because I-10 is an essential freight and travel route, all four existing travel lanes must remain open during weekdays," Richardson said. "This necessitated a good deal of night work, which has additional safety protocols and equipment."

But, she added, "All that remains now is to upgrade the I-10 ramps at Highland Road and LA 73, add and replace some roadway signs and lighting, and install the new roadway striping." CEG