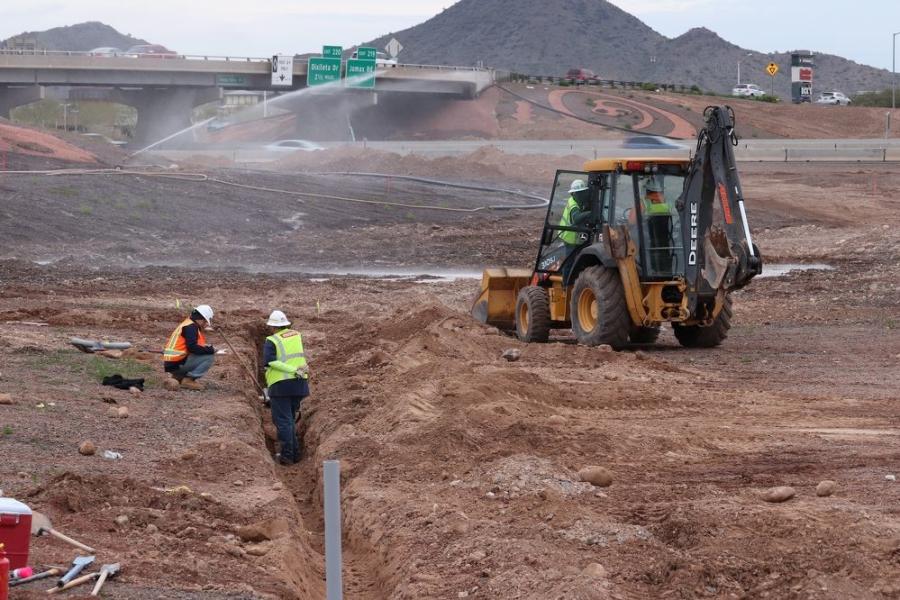 Described as a project that will help move people and products for decades to come, a $50 million undertaking to reconstruct two busy interchanges along Interstate 17 in north Phoenix, Ariz., is under way. The Arizona Department of Transportation (ADOT) is overseeing the work, which started in late November 2018.

"The site has been in good condition, allowing for quick clearing and grubbing near both interchanges before earthwork began in January," said ADOT spokesman Doug Nintzel. "Initial work in December and early January allowed for clearing of some desert trees and shrubs that were part of previous landscaping at both interchanges." 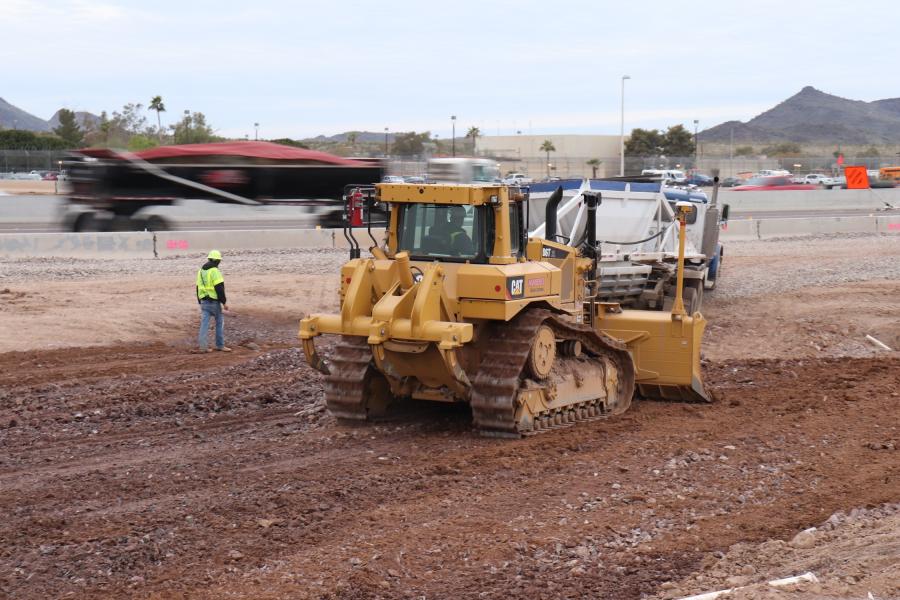 The two new interchanges are under construction at Happy Valley Road and, a mile to the south, at Pinnacle Peak Road. The larger and more traveled of the two interchanges connects I-17 and Happy Valley Road. On the east side of the freeway is the Norterra shopping mall, as well as an insurance company's regional headquarters complex.

For the last two decades, the Happy Valley Road interchange has featured two roundabouts. They are located on each end of a two-lane bridge traveling over I-17.

According to Nintzel, "With limited funding at that time, the roundabouts were selected in the late 1990s as a way to still allow more lanes along a wider Happy Valley Road to transition onto an overpass, with one lane in each direction. Those roundabouts have gotten us this far. But more capacity is needed, and there's now enough regional funding to build an interchange to meet future demands."

Early construction efforts have focused on earthwork. Crews from FNF Construction, the primary contractor on the job, have been involved in "over excavation", in order to stabilize ground north of the existing Happy Valley Road bridge. 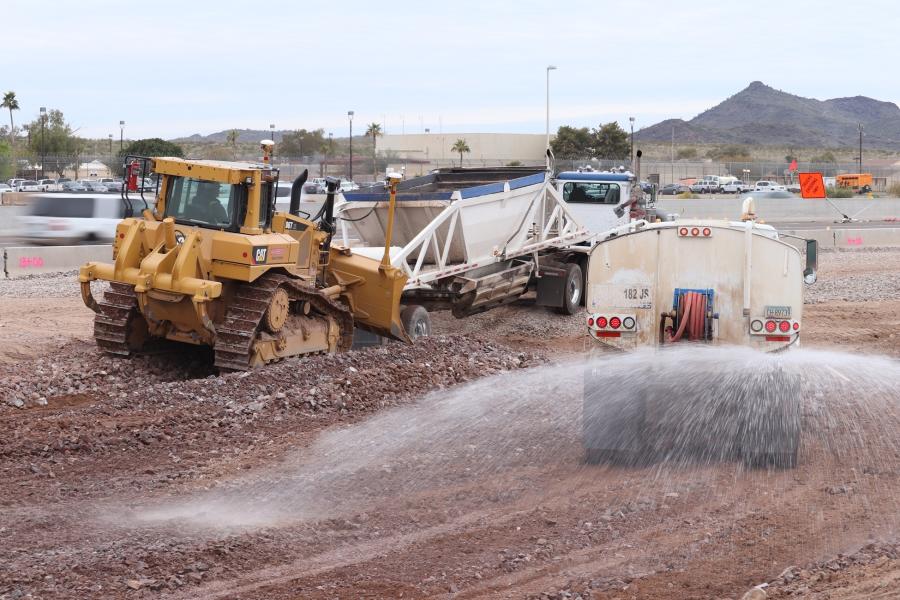 There are approximately 30 workers on the job site at this time. The contractor has been using earthmoving equipment, including scrapers, blades, dozers and soil compactors. The current soil stabilization work near Happy Valley Road involves more than 70,000 cu. yds. of material that's been moved.

Plans include one of the first diverging diamonds (DDI) for ADOT at one of its freeway interchanges. Two others are currently under construction as part of the Loop 202 South Mountain Freeway project, scheduled for completion near the end of 2019.

"We took note of the increase in diverging diamonds being built around the country," said Nintzel. "Our design team determined that Happy Valley Road was a good location. Among the benefits of the design is allowing left-turning traffic to enter a freeway on-ramp, without crossing in front of opposing traffic. In a growing area, we're working to maximize the flow of rush-hour traffic through the interchange." 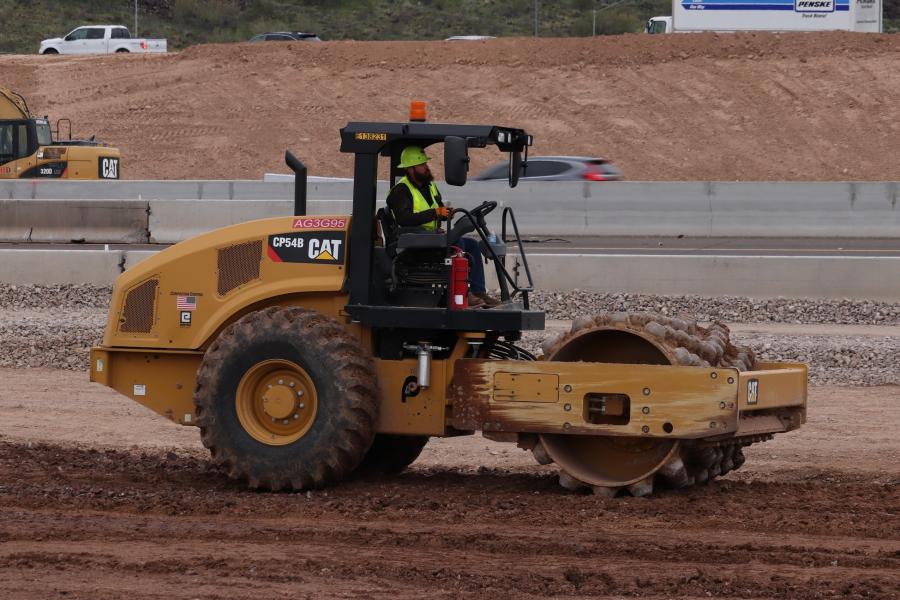 A DDI is a diamond interchange on which the two directions of traffic on the cross street (above or below the freeway) cross to the opposite side on both sides of the bridge at the freeway. ADOT's website states that more than 90 DDIs have been built in 29 states in the past decade. The design has increased in popularity because of safety, operational and cost benefits.

DDIs can reduce the number and severity of crashes compared to traditional diamond interchanges, while helping eliminate traffic congestion. They also provide an opportunity to integrate multimodal facilities for pedestrians, cyclists and transit into the interchange. They are often more cost-effective to build, and there are fewer impacts on the local community during construction.

During much of the project, the new bridges will be built next to the existing bridges, which will remain open to traffic during the majority of construction. By mid-March, a new concrete box drainage culvert was installed beneath Pinnacle Peak Road, just to the east of I-17. Pinnacle Peak Road was closed in that area, as of mid-February.

"Our biggest challenge remains managing local traffic needs, while building the new interchanges," said David Diekman, ADOT project supervisor. "It's a big plus to limit closures affecting traffic on the existing bridges over I-17. We will need restrictions down the line to transition traffic from the old structures to the new ones. However, local residents have been pleased with the overall traffic control plans." 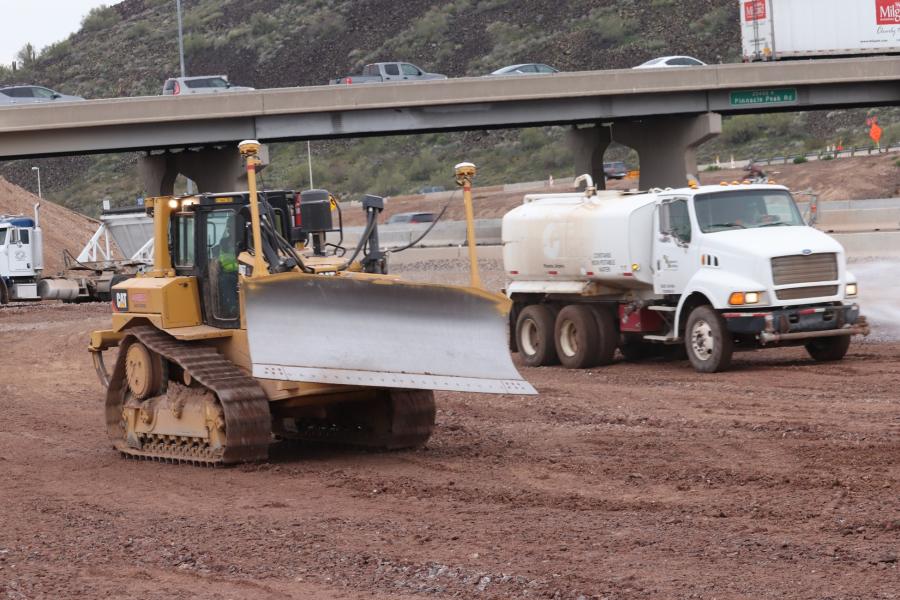 The project will widen I-17 by one lane in each direction in an area that will include the reconstructed interchanges. The Pinnacle Peak Road interchange will remain a tight diamond, with added turn and through lanes to help manage anticipated traffic demand for decades to come.

Nintzel added that keeping the public informed about the project is critical.

"It's very important. We held public meetings ahead of construction to let people see plans and provide thoughts. The project has received support from local residents, who are looking forward to the upgraded interchanges."

The I-17 Interchanges Reconstruction Project in north Phoenix is funded by the Maricopa Association of Governments' regional transportation plan, approved by local voters in 2004. Primary revenue sources are a regional half-cent sales tax for transportation projects in the Phoenix area, as well as federal highway funds for the Maricopa County region.

The project is scheduled for completion by fall 2020.