ADOT Responds to Population Boom With $40M I-10 Expansion 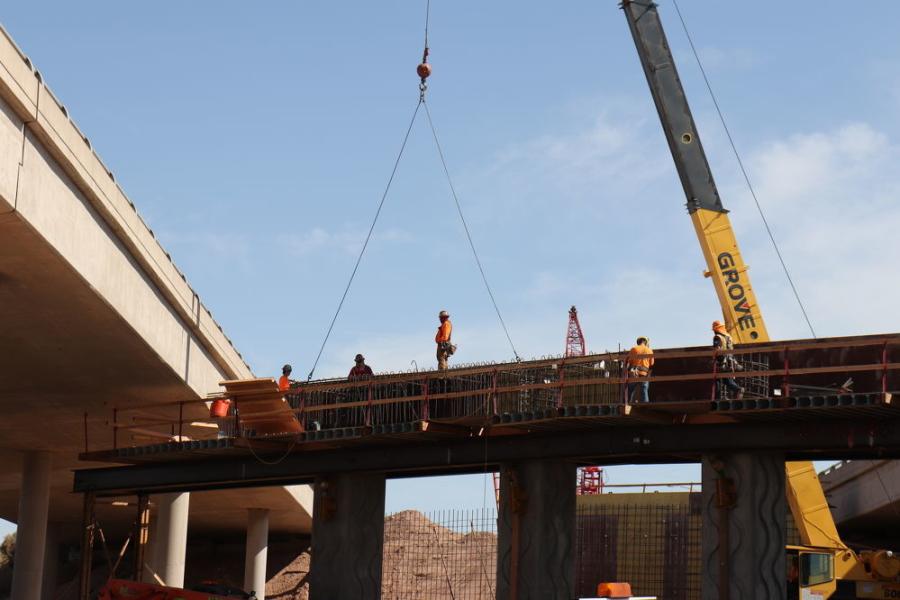 Work began in March 2018 and is scheduled for completion in summer of 2019. (Arizona Department of Transportation photo)

Arizona population is booming and local highway builders are responding. They are moving at a good pace despite summer heat and frequent dust storms.

The Arizona Department of Transportation (ADOT) and the Federal Highway Administration are busy with a $40M project to widen Interstate 10 between Casa Grande and Tucson, from just south of Earley Road to Interstate 8 (mileposts 196-200) in Casa Grande.

Work began in March 2018 and is scheduled for completion in summer of 2019. That means the project is one month ahead of schedule based on earlier predictions.

But work schedules had to be adjusted at times because of extreme heat and frequency of dust storms in the area. By adjusting work schedules, delays have been avoided.

The project includes replacement of the existing bridge over Jimmie Kerr Boulevard and the Union Pacific Railroad. It also features installation of a fiber optic trunk line between milepost 186 and milepost 209. 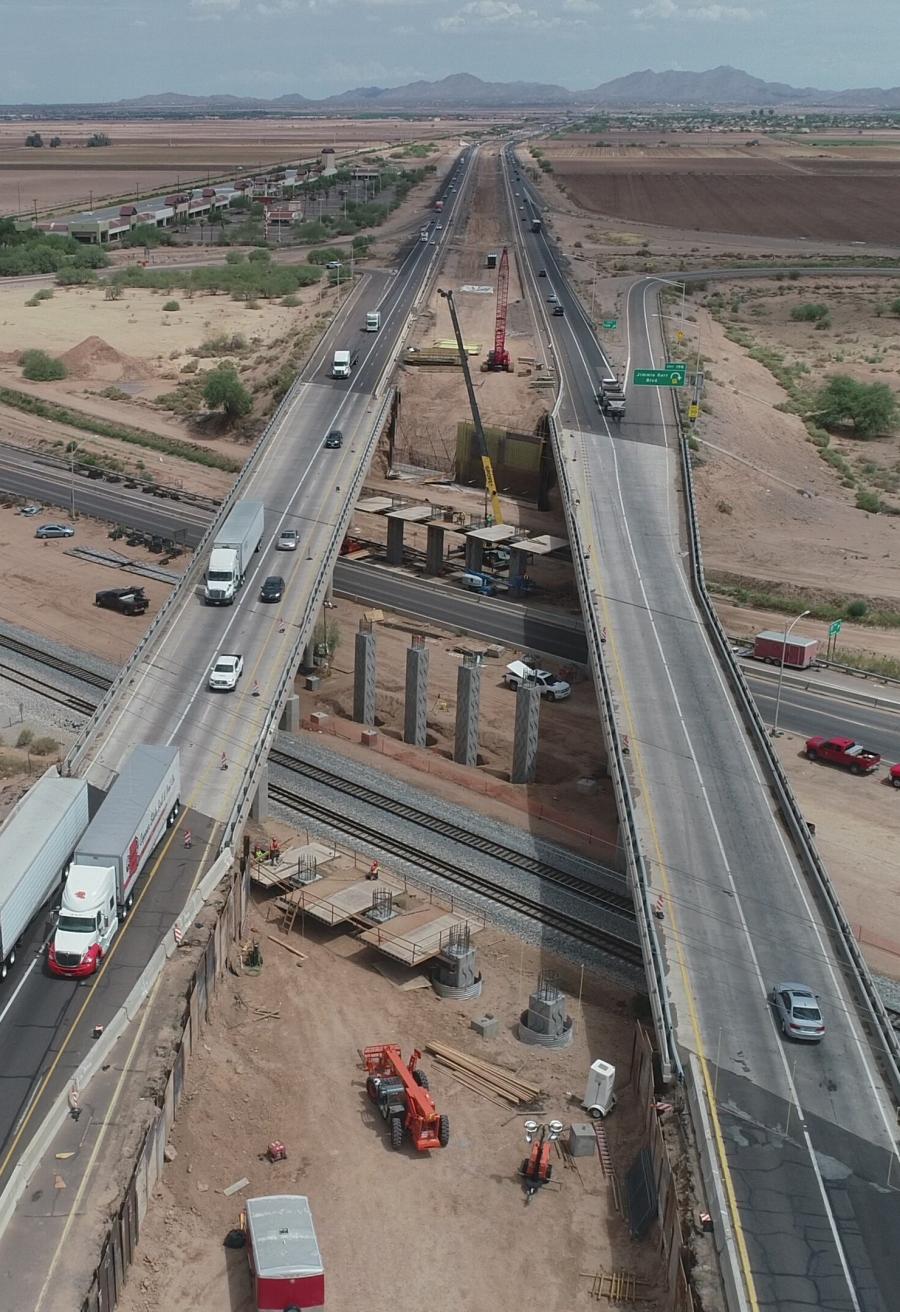 The primary benefits to this project are traffic flow and driver safety, said Tom Herrmann, public information officer in Phoenix.

"We are widening I-10 by adding an additional lane in each direction. The length of the project is about four miles."

Herrmann pointed out that I-10 is both a vital commercial corridor and a busy freeway for personal travel between Arizona's two largest cities, Phoenix and Tucson. He said widening the freeway is necessary to improve traffic flow, remove congestion and give drivers additional space as the state's population continues to increase.

Herrmann added that Maricopa County, which includes Phoenix, was the nation's fastest-growing county in 2017 and now has 4.2 million residents; Arizona is the fifth-fastest-growing state in the nation for the 12 months that ended July 1, 2017.

The new lane in each direction is being built adjacent to the median. And the median will include a concrete barrier.

In addition, new bridges will be built at Jimmie Kerr Boulevard and the Union Pacific Railroad. They are part of the widening effort.

"The current I-10 bridges over Jimmie Kerr and the railroad cannot accommodate the additional lanes of traffic that are being created as part of this project," Herrmann said. "The new bridges — one in each direction — are being built to accommodate the wider freeway and increasing traffic. The concrete barriers are being added to increase driver safety because adding travel lanes in the median will decrease the width of the median."

The new bridges will require new ramps at the location.

The project also will include auxiliary lanes in both directions between I-8 and Jimmie Kerr Boulevard, providing a safer alternative to the existing ramps.

An auxiliary lane is an extra lane on the entire length of highway between interchanges, giving drivers more time to merge in or out. The lane is created when an entrance ramp meets the highway and drops out with an "exit only" sign to become the ramp at the next exit.

The project started just south of Earley Road. Periodic lane closures will be in effect, but only at night.

Another widening project is under way on I-10 near Eloy, where crews are adding lanes, a new traffic interchange at Arizona 87 and creating a new dust-detection zone. That project, which started in December 2017 is to be completed in fall of 2019.

A joint venture of Ames and Combs construction companies head up the construction. Ames is based in Burnsville, Minn., and has an office in Scottsdale, Ariz. Combs Construction's head office is in Phoenix. 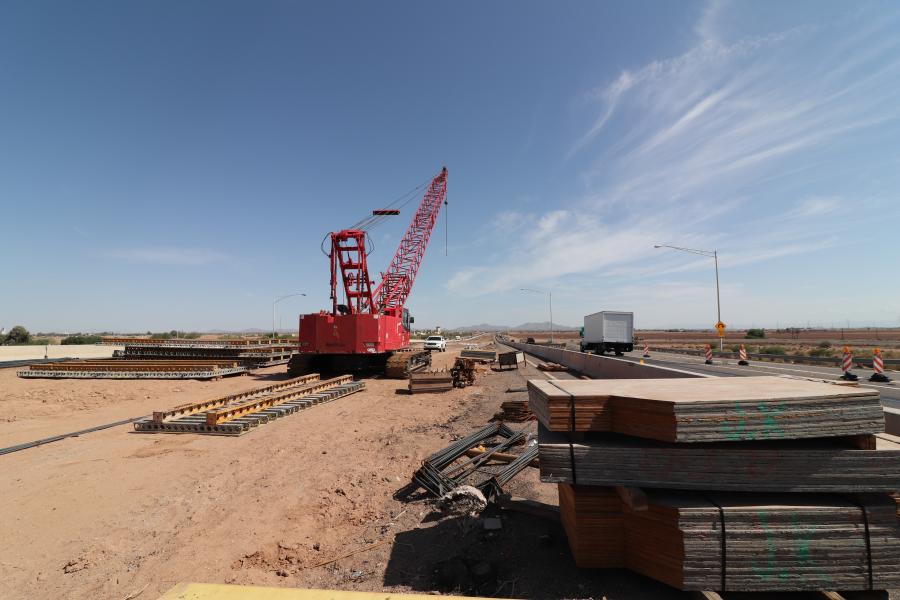 Ames is a family-owned enterprise specializing in energy, mining, transportation, water and wastewater and commercial construction projects. Combs construction reports that since 1993, it has positioned itself as one of Arizona's top general contractors in the asphalt paving and heavy highway construction sector.

The I-10 widening project has between 25 and 30 subcontractors. Major names include PAVCO of Arvada, Colo.; Sturgeon Electric of Henderson, Colo.; RGG United of Glendale, Ariz.; Case Foundation of Roselle, Ill.; Paradise Rebar of Phoenix; and Howe Precast of Mesa, Ariz.

Most of the current work on the project is taking place at the site of the new bridges over Jimmie Kerr Boulevard.

"We are building piers and other supporting infrastructure for the bridges," Herrmann said. "We've already made improvements to the outside shoulder to carry I-10 traffic during the work and we're currently making improvements to the median to prepare for building the new travel lanes."

Concrete and asphalt use will be significant over the course of the project. Crews will lay about 116,700 tons of concrete. They will apply 9,256 cu. yds. of concrete at the bridges. Even more concrete, about 13,211 cu. yds., will be used for retaining walls.

Although crews will be working near travel lanes, the project at Casa Grande isn't expected to increase congestion in the area. Lane restrictions are expected to take place at night, leaving two lanes open to traffic in both directions during heavy travel times.

"Despite working along the edge of freeway travel lanes we are committed to maintaining two lanes of traffic in each direction as much as possible during the project to maintain traffic flow," Herrmann said. "Lane restrictions are limited to nights whenever possible to minimize travel restrictions in the area."

The widening project will support growth, both in terms of population and economics. I-10 between Phoenix and Tucson is a key commerce corridor, and the improvements will support the continuous growth in the region, including Casa Grande and surrounding Pinal County.