Crossing Hell Canyon in the Arizona county of Yavapai will get a lot easier once the new, wider four-span steel-plate girder bridge is completed. 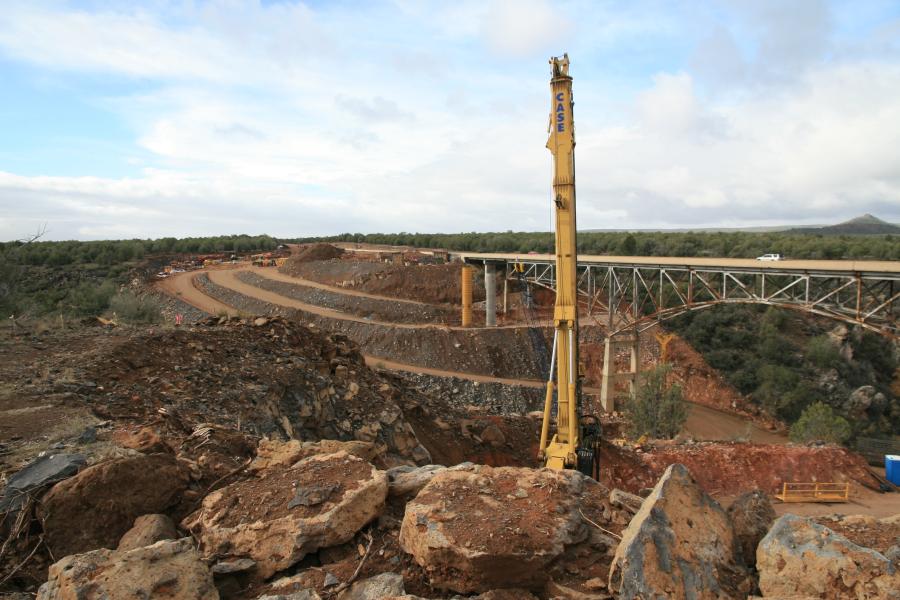 Crossing Hell Canyon in the Arizona county of Yavapai will get a lot easier once the new, wider four-span steel-plate girder bridge is completed. The $14.4 million bridge replacement project being overseen by the Arizona Department of Transportation involves building a new structure east of the existing bridge and then removing the existing 600-ft. (183 m)-long three-span steel deck truss bridge built in 1954, said Dustin Krugel, public information officer of ADOT Communications.

Paid for with state and federal highway funds, the project began in 2015 and is expected to be complete by the end of 2016. It is currently on schedule.

Not a Highway to Hell, Just a Bridge Over Its Canyon

Despite its name, Hell Canyon Bridge actually sits in a lovely part of the state. Just 18 mi. (29 km) north of Chino Valley at milepost 346 on state Route 89, the bridge crosses a steep rocky gorge about 140 ft. (43 m) above the floor of the canyon. It serves as an important connection linking Prescott and northern Arizona (Interstate 40 in Ash Fork).

The current three-span bridge, which, according to the Historic Bridge Inventory, cost $325,000 to build, has been classified as structurally deficient and functionally obsolete. ADOT bridge inspectors report that it's “not wide enough and cannot handle heavy loads,” Krugel said. “The bridge is safe; however, some needed repairs or improvements have been identified during bridge inspections.”

If the existing bridge is not replaced, possible roadway closures would require a 160-mi. (257 km) detour for the traveling public during maintenance, repairs, or safety concerns, Krugel continues. The average daily traffic for this corridor on SR 89 is 3,400; a single-day closure would result in approximately 550,000 detour miles total for all the traffic.

The bridge has undergone several improvements since its initial construction, including most recently, a deck repair in 2013, but it was built to standards that no longer meet minimum Federal Highway Administration, American Association of State Highway and Transportation Officials and ADOT Bridge Design Guidelines. Therefore, following the interim repair in 2013, ADOT started a study to design a new bridge that would ultimately replace the aging and narrow bridge.

Because Hell Canyon Bridge is considered a Section 4(f) property for its historic significance and the property will be impacted as part of this project, ADOT and the Federal Highway Administration had to complete a Section 4(f) evaluation for the project in accordance with National Environmental Policy Act. Section 4(f) applies to federally funded transportation projects. Requirements include a special evaluation and approval, as well as a report made available for public comment.

“The wider bridge will allow for two 12-foot lanes and 10-foot shoulders.” The bridge also will accommodate heavier loads, ensuring commercial trucks can conveniently carry goods and produce to their final destinations, particularly when I-40 traffic is diverted onto SR 89 during serious crashes.

The Devil's in the Details

Work began in the summer of 2015 when crews started building access roads to Hell Canyon prior to construction, Krugel reveals.

The first phase of the project included construction of the new bridge as well as temporary access roads along the north and south sides of the canyon to assist with bridge construction and removal.

From June 2015 to September 2015, general contractor Ames Construction Inc. oversaw building of access roads on both sides of the canyon in order to allow equipment to the bottom of the canyon.

“This was accomplished by blasting specific areas of rock from the north side of the canyon and hauling it to the south side to be used as fill.”

Between November and January Krugel said the contractor built and backfilled both abutments and constructed the columns and pier caps at each of the three piers.

“Depending on the type of operations ongoing, we have had all types of excavators, earth movers, loaders, cranes and other equipment typical for a roadway and bridge project,” Krugel said. “I sampled a few diaries and saw that the following list of equipment was recorded.”

In February and March Krugel expects crews to erect steel girders, “make all required connections, bracing, welds, etc.” and build stay-in-place metal deck forms. In April they should be ready to pour the new bridge deck and barrier wall. April and May also will see the start of paving new asphalt on the new alignment of SR 89.

By June, Krugel hopes they'll be ready to switch traffic to the new alignment and bridge and begin removal of the existing bridge.

“After the new bridge is completed, traffic will be switched to the new bridge as part of second phase of the project,” Krugel explained. “The existing Hell Canyon Bridge will then be dismantled and removed, which is expected to take up to three months. The old bridge will be disposed of in a safe and appropriate manner.”

Additional road construction/realignment will be necessary to the north and south of the new bridge.

July through October is reserved for reconstructing Hell Canyon to near-original grades and elevations and placing seed on the final canyon slopes.

Krugel said impacts to motorists during construction will be limited because work on the new bridge won't affect traffic crossing the existing bridge. However, daytime blasting operations were required prior to construction for the construction of the access roads, so intermittent closures and delays were necessary initially. ADOT sends out advance notice to the public, media and stakeholders when any closures are scheduled in order to mitigate inconvenience.

When asked about challenges posed by the project, Krugel said, “There have been too many to list. With all of them, the team honored the commitment made to partnering at the beginning of the project and made decisions based on what is best for the project.”