Rubber from about 75,000 tires will be used in the layer of asphalt being added to 11 miles of I-17 between Dunlap and 19th avenues in Phoenix. 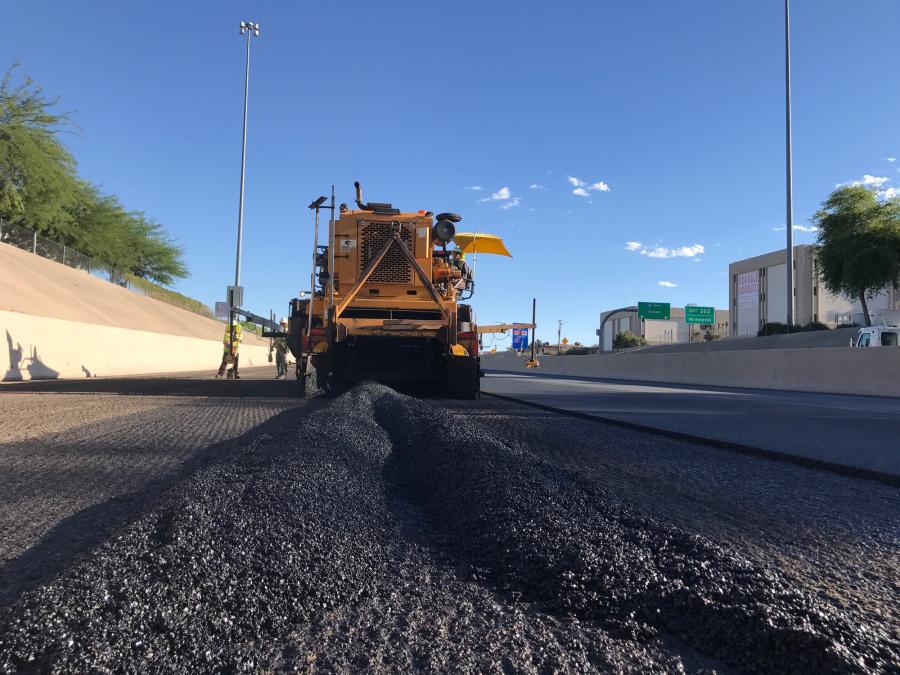 Photo via Arizona Department of Transportation.

The rubberized asphalt used by the Arizona Department of Transportation on many highway paving projects not only creates a smooth ride for drivers, it also provides a second life for the rubber from thousands of old, worn tires that might otherwise be dumped in landfills.

Such is the case with the ongoing project to put a fresh layer of rubberized asphalt on a busy stretch of Interstate 17 in Phoenix. Rubber from about 75,000 tires will be used in the layer of asphalt being added to 11 miles of I-17 between Dunlap and 19th avenues in Phoenix.

For the I-17 project, the process for recycling tires begins at the Crumb Rubber Manufacturers plant in east Mesa, where a complex series of conveyor belts, blades and other equipment removes the internal metal belts from the tires while turning the rubber into granules that look like ground coffee.

The crumb rubber is a key ingredient that is blended with hot asphalt and aggregate to become rubberized asphalt. For the I-17 project, the mixing occurs at a Vulcan Materials Co. plant in Phoenix. The heated rubberized asphalt is then delivered in trucks when weekend paving on the freeway is underway.

ADOT has used rubberized asphalt on many stretches of the state's highways, including metro Phoenix freeways, for decades. As a result, rubber from millions of tires has been used to help provide a smooth, durable ride for drivers across Arizona.

“What we like most about rubberized asphalt is its durability,” said Dallas Hammit, ADOT's state engineer and deputy director for transportation. “When our riding surface pavement lasts longer – in some areas for well over a decade – it is cost effective and limits traffic disruptions.”

Rubberized asphalt has also been recognized for reducing traffic noise, specifically the sound from vehicle tires, by approximately four decibels in neighborhoods near urban freeways.

The weekend paving of sections of I-17 is scheduled to be completed in June. This weekend, northbound I-17 will be closed between Glendale and Dunlap avenues from 10 p.m. Friday to 5 a.m. Monday, May 15, for the resurfacing work. Drivers should consider alternate routes, including northbound State Route 51, to avoid heavy traffic approaching the I-17 closure.

For more information about ADOT's $9.8 million I-17 Improvement Project between Dunlap and 19th avenues, visit azdot.gov/I17PavementPreservation.