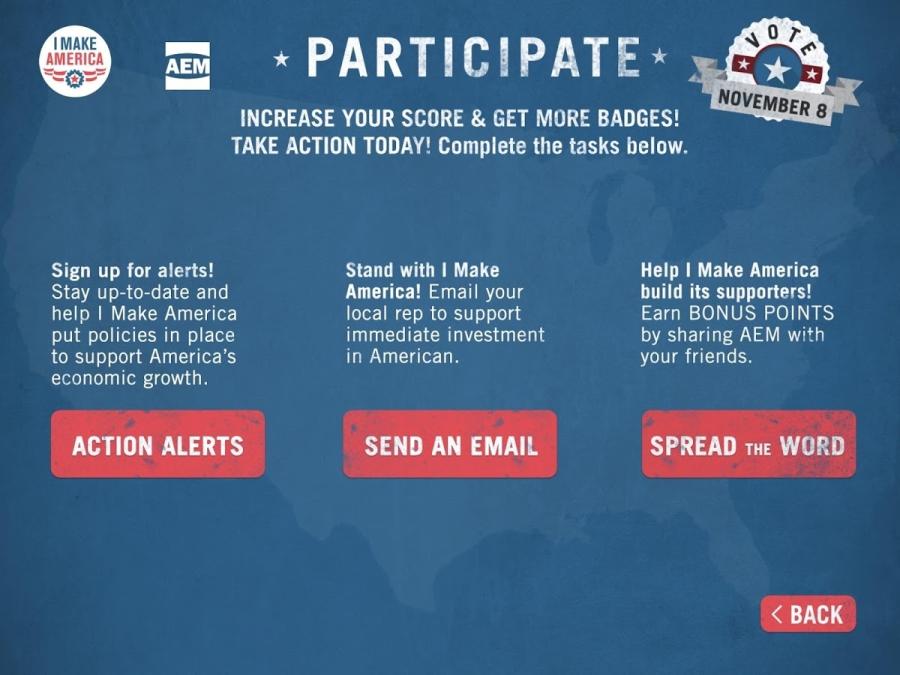 The Association of Equipment Manufacturers (AEM) launched a new smartphone game through its “I Make America” campaign to engage and educate voters on manufacturing issues this election season.

The IMA Game is an interactive experience intended to educate users about the manufacturing issues at stake during the 2016 campaign in a fun and engaging way. Users compete in several small construction and agriculture equipment-themed challenges followed by multiple choice questions that gauge their knowledge of several manufacturing issues, like infrastructure, trade and renewable fuels.

“AEM hopes that this I Make America Game serves as a compelling tool for manufacturing voters to get involved with I Make America and educate themselves on the issues that matter this election season,” said AEM President Dennis Slater. “This is an important part of our broader effort to raise the profile of manufacturing issues during the campaign.”

To support the game, the I Make America campaign plans to travel to more than two dozen manufacturing facilities throughout the United States to engage employees and allow them a chance to compete in the game. I Make America will award prizes to the highest-scoring game user at each event, and a grand prize (a 3D television) to the highest-scoring app user by the election. Equipment manufacturers in Iowa include companies like Vermeer, John Deere, Kinze, Hagie, and many more.

“The I Make America Game is a terrific tool to help manufacturers educate their employees and their communities about the issues that affect our businesses,” said Jim Barrett, executive vice president of marketing, farm, ranch, and agriculture division of Blount International. “I would encourage all equipment manufacturers to get engaged through I Make America this year to energize the manufacturing voter base.”