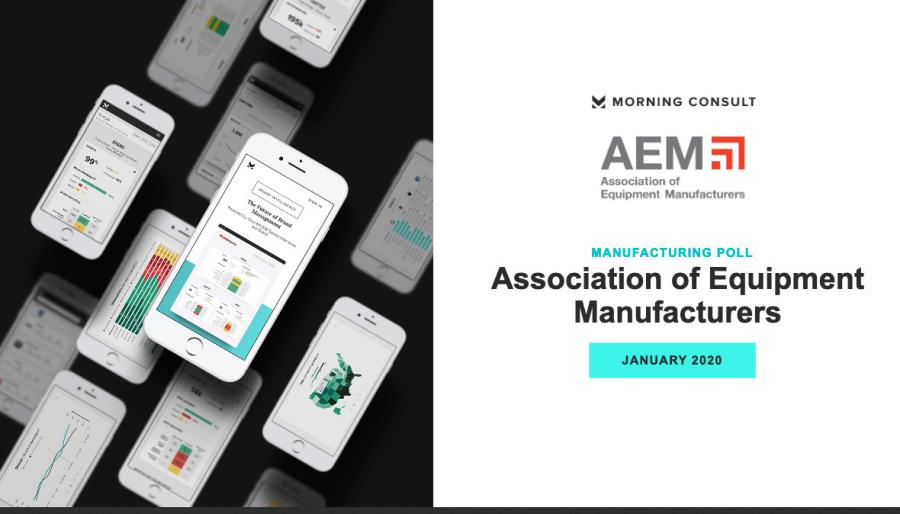 More than three quarters (76percent) of registered voters want to know how 2020 presidential candidates plan to support and grow manufacturing in the United States, according to a new national poll from the Association of Equipment Manufacturers (AEM) conducted by Morning Consult and released Jan. 14.

"The issues that are important to equipment manufacturers in the United States will be front and center during the Manufacturing Election, especially in swing states like Michigan, Ohio, Pennsylvania and Wisconsin" said Kip Eideberg, AEM senior vice president of government and industry relations. "Candidates for public office in 2020 need to understand and support the issues most critical to the continued growth and success of manufacturers if they hope to be successful."

Seven in 10 voters are more likely to support candidates running for office if they support efforts to bolster the economy of rural America and prepare students for careers in manufacturing.

"With manufacturing squarely in the spotlight this year, it is more important than ever that we come together as an industry to show elected officials and candidates the policies that matter, the values that are critical, and why the men and women who make America are the source of our nation's strength," said John Garrison, chairman of the board and president and CEO of Terex Corporation, and 2020 chair of AEM's government and public affairs committee.

Voters also are split on whether a hypothetical Democratic nominee will actually keep, bring, and/or increase manufacturing jobs in the United States.

The national poll included an oversampling of registered voters in manufacturing-heavy Michigan, Ohio, Pennsylvania and Wisconsin. The equipment manufacturing industry supports more than 560,000 jobs in the four swing states that President Obama won in 2012 and President Trump carried in 2016.

To keep manufacturing front and center in 2020, AEM is launching a series of initiatives to educate and engage the men and women of the industry in the political process, including a three-month "Manufacturing Express" tour of 20 states that will highlight the importance of equipment manufacturing to communities across the country, connect manufacturing voters with elected officials and candidates, and promote civic engagement.

This poll was conducted by Morning Consult from Jan. 2 to 5, 2020, among a national sample of 2,000 registered voters. There was an oversampling of 300 registered voters in Michigan, Wisconsin, Pennsylvania and Ohio — states largely recognized as important swing states heading into the 2020 elections. The interviews were conducted online and the data were weighted to approximate a target sample of Registered Voters based on age, race/ethnicity, gender, educational attainment, and region. Results from the full survey have a margin of error of +/- 2 percent.