After 18-Month Pause, Dredging Resumes at Port of Savannah 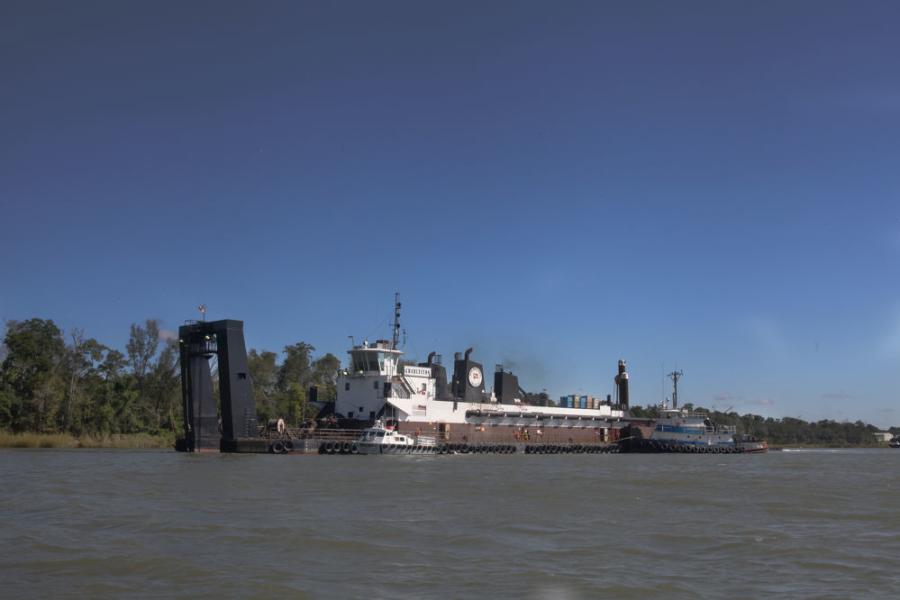 The 250-ft. Dredge Charleston, built in 2000, which utilizes a 24-in. diameter pipeline to pump debris and other material from the seafloor.

Dredging to deepen the shipping channel to the Port of Savannah has resumed after an 18-month pause, Col. Daniel Hibner of the Army Corps of Engineers recently announced as the second half of the $973 million expansion has started to get under way.

This portion, which is making room for larger cargo ships, involves deepening a 40-mi. (65 km) stretch along the Savannah River and into the Atlantic Ocean.

"This is another element of work as part of the Savannah Harbor Expansion Project (SHEP) to deepen the harbor to the new authorized depth of 47 feet," said Spencer Davis, senior project manager of SHEP. "This depth will allow the larger, neo-Panamax container vessels to call on the harbor with fewer tidal delays." 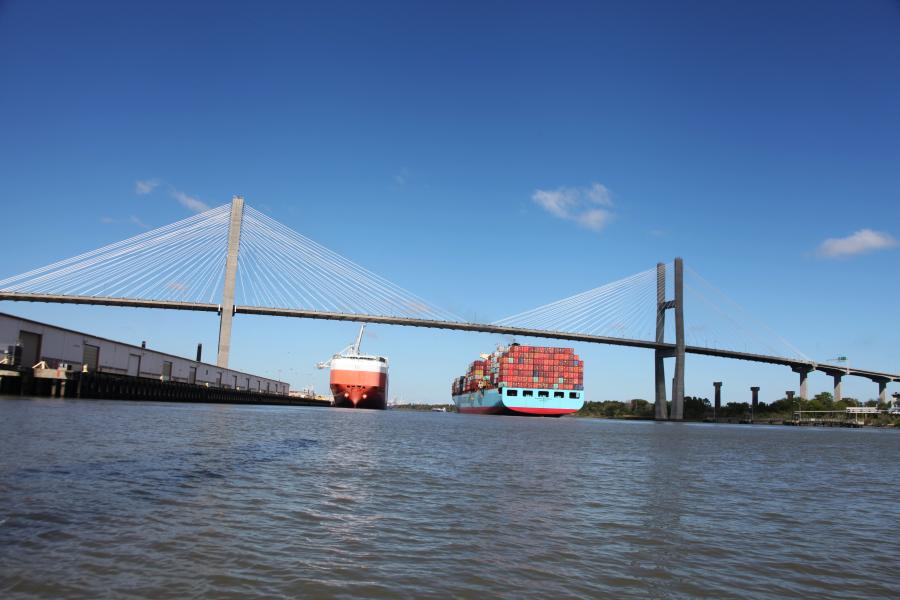 It was reported that dredging was placed on hold at the halfway point in March 2018 because a court settlement required the Corps to demonstrate that it could use machines to offset a small loss of dissolved oxygen in the river before starting the project's second half. The agency reportedly released results of a test run for its oxygen machines in August.

"The project includes removal of all new work material, including any material within the existing maintenance prism, to required project depth of 47 feet," Davis stated. "The material to be removed is located between Stations 70+000 to 103+000. All dredged material will be placed in existing upland dredged material containment areas (DMCAs). The contractor will be responsible for proper operation and maintenance of the DMCAs during dredging operations. Approximately 5,000,000 cubic yards of material will be removed from the channel during the contract."

The contract amount is approximately $133.2 million, and the prime contractor is Norfolk Dredging Company. A notice to proceed was issued on Sept. 10 and the period of performance is 730 days from that date.

According to Billy E. Birdwell, senior public affairs specialist of the Savannah District of the U.S. Army Corps of Engineers, SHEP is a cost-shared project between the federal government and the state of Georgia. He reported that SHEP will result in a benefit to cost ratio of $7.30 in benefits to the economy for every $1 in costs.

"While deepening the harbor and shipping channel, the nation's fourth-busiest container port will remain open for all traffic," Birdwell said. "To keep to our timeline, the dredging company will operate 24 hours a day, every day of the year. There is only one Savannah River, so the exact conditions of the river bottom are unique to this river, although they may be similar to other locations."

Birdwell added that the Army Corps only deals with the government's prime contractor to which the work was awarded. All agreements with subcontractors, if any, are handled by the prime contractor. 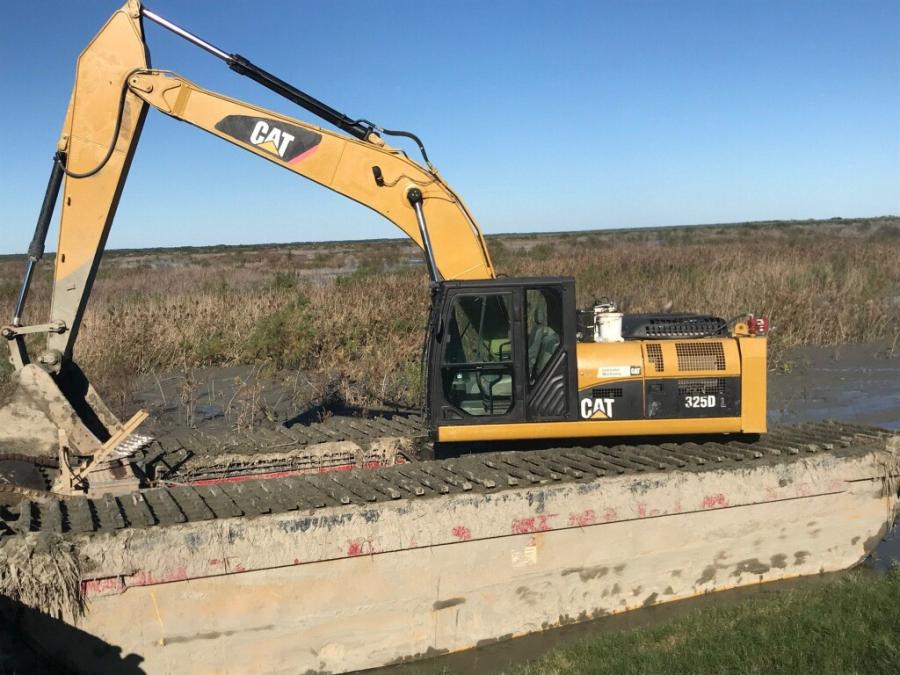 Steve Bassett, project manager of Norfolk Dredging Company, reported that the star of the project is the Dredge Charleston. Smaller pieces of equipment used include a 972 Cat loader, three D6 dozers and a 325 marsh excavator that is used to move pipeline in the disposal area.

In addition, three small tugboats assist the equipment and a crane barge also is on site. Smaller cranes are used to help move the pipeline around as well.

The subcontractor, SES out of Knoxville, Tenn., also has several pieces of excavation equipment at the project site. The company is working on building a revetment on the shoreline.

According to Norfolk, the project is pumping 25,000 gal. per minute. Bassett reported that the total length of the pipeline is roughly 45,000 ft., or about 9 mi.

"Initially, you start at your disposal site and start laying sections of pipeline," he explained. "Our pipeline comes in in 650-foot sections and we put those sections together with a ball and bell joint. After 2,000 feet are together, we take it to the location in the river that we want to sink it. We started off with 20 sections, joining them together and sinking them in the Savannah River from the disposal site to the start of the dredging. We keep moving ahead up the river."

Bassett said that the submersed pipeline is steel and the line from the water's edge to the disposal site is high density polyethylene. He further noted that material is cut with a hydraulic cutter that spins at 30 rpm and resembles an old-fashioned eggbeater. 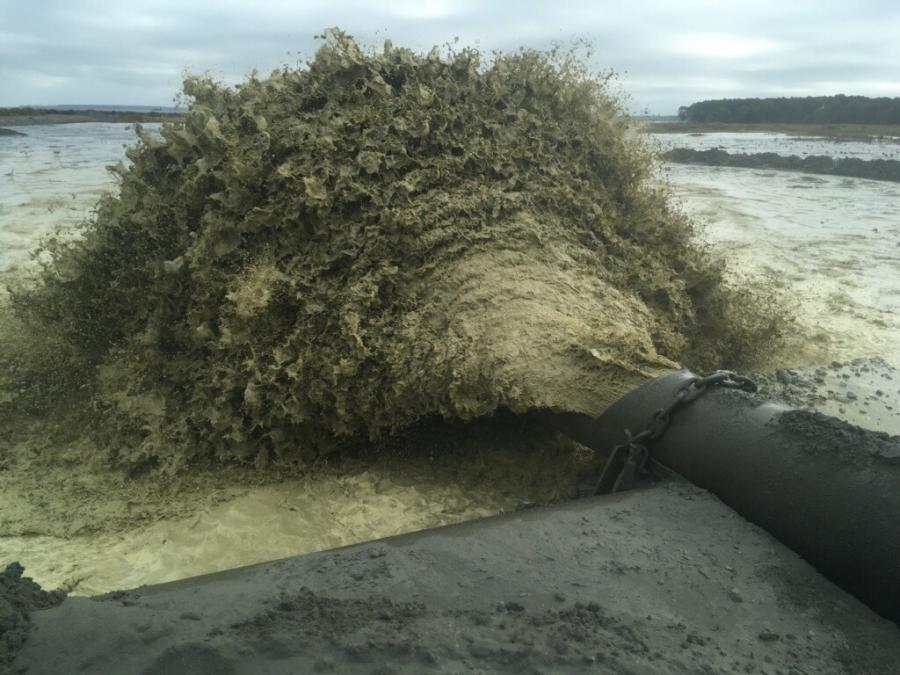 "The cut material gets pulled up the pipeline into the pump and is pumped many, many miles," Bassett said. "Once it can't pump any further, we install another booster pump and each will take it roughly another two miles."

The material is made into a slurry that contains 80 percent water and 20 percent solids. This is pumped into the disposal area. The material is left there while pipes carry the water out and transport it back into the Savannah River.

"Every project has challenges," Bassett stated. "We have to coordinate with the shipping traffic that's coming in and out of the Savannah River. This is a big port and there's a lot of cargo that comes in and out of Savannah, and we have to make sure it's safe for them to come in and out. So when a ship comes by, we have to move out of the channel and we're communicating with the ships on a continuous basis. I wouldn't call it a challenge. I would just call that part of doing business. It's kind of what I've done for 30 years, so it's business as usual. It's a challenging project, but it's what Norfolk Dredging Company has done since 1899."

Bassett noted that about 75 people are currently working on the job.

"We work 24 hours a day, 7 days a week," he said. "We never shut down. The rain doesn't impact the work. The only thing as far as weather goes would be a hurricane, and we have a hurricane plan to move equipment further up the river." CEG