After 60 Years, VA's George Washington Parkway to Get $161M Rehab 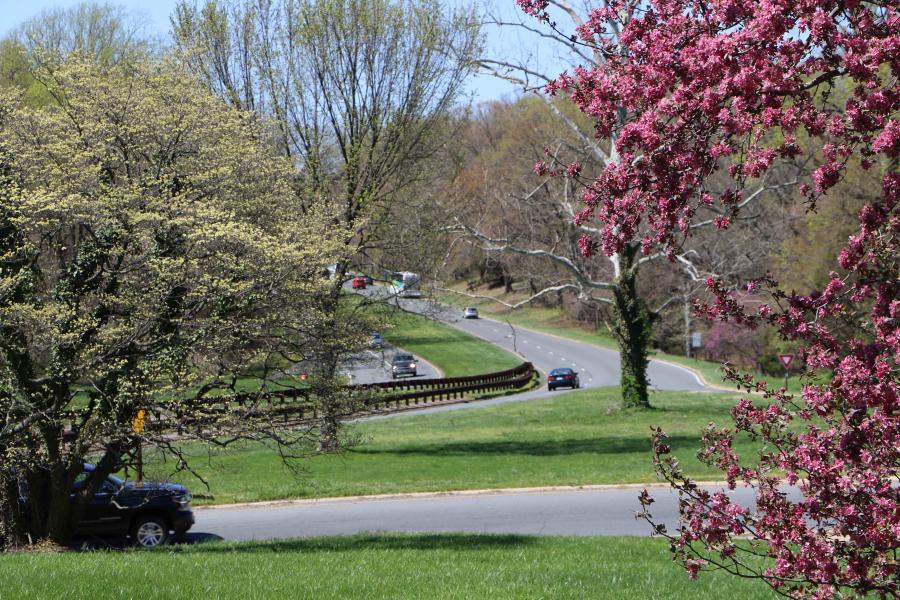 The National Park Service (NPS), in partnership with the Federal Highway Administration (FHWA), awarded a $161 million contract to rehabilitate the northern section of the George Washington Memorial Parkway.

That is obvious to drivers traveling the route along the south bank of the Potomac River, where they have bumped along spreading gaps in the road surface, avoided widening potholes, and encountered eroding drainage outfalls.

Some sections of the road are deteriorating faster than they can be fixed.

Now, though, the northern and busiest stretch of the route is about to get a complete makeover.

In December, the National Park Service (NPS) awarded a $161 million contract as part of a multiyear repair project that promises a new roadway — and nightmarish traffic when construction begins in about a year.

The renovation will encompass 7.6 mi. from Spout Run to Interstate 495, where approximately 70,000 vehicles travel each day. Crews will excavate the entire area before laying new asphalt. Roadside barriers, stone walls and other traffic safety features also will be rebuilt. In addition, the work includes improved storm drainage, a redesign of the VA Route 123 interchange in McLean and improvements to entrance and exit lanes.

The Washington Post reported that, as part of the project, historic views from the parkway that have been blocked by grown vegetation will be reopened. The two scenic overlooks on the northbound side will be improved with new sidewalks and curbs, and new coating of asphalt in the parking areas and ramps.

NPS Park Ranger Aaron LaRocca told the Washington news source that this stretch of the parkway, completed in 1962, has never undergone a significant rehabilitation, and because of its age and heavy use, the roadway and drainage system are showing serious deterioration.

"We've continued to maintain the roadway surface and do some other projects to address the condition of the parkway, but it is toward the end of its service life," LaRocca explained. "It needs rehabilitation to continue to be a critical link in the regional transportation network."

NPS and the Federal Highway Administration (FHA) awarded the design-build contract to Fort Myer Construction Corp., located in Washington, D.C. The parkway's updated design will be completed in a year, with construction set to begin in 2023 and completed in 2025, Park Service officials said.

Although it may be at least another 12 months before construction begins, officials anticipate that there will be significant impacts on traffic. Most of the work would be built using median crossovers and temporary pavement widening to maintain two lanes of traffic in both directions during rush hours, according to project documents. Officials anticipate some areas with limited width will require lane closures.

Parkway Upgrade Seen as An Essential

The investment in one of the Washington, D.C., area's most iconic routes comes through a landmark conservation law passed last year that is providing millions of dollars for maintenance of public lands and recreation.

Virginia Sen. Mark R. Warner, who helped secure the federal funding for the reconstruction, said the investment creates local jobs while ensuring the route remains functional for the thousands of people who use it daily.

"It is essential for Virginia commuters and travelers," Warner said in a statement. "I am excited to see these dollars come to Virginia to help rehabilitate one of the most important parkways in the nation."

According to NPS officials, the rehabilitation will extend the parkway's life span while creating a much smoother ride and a more scenic experience for users. As many as 34 million cars travel the road each year, according to the Park Service, and it serves 7.4 million recreational visitors who stop by any of the multiple parks and landmarks along the route.

While the northern section opened in 1962, the first leg of the parkway, near George Washington's home at Mount Vernon, had been around since 1932. The parkway offers panoramic views of the Potomac River and the District, including landmarks such as the Washington Monument and the Lincoln Memorial, as it runs from Mount Vernon in the south to the Capital Beltway in McLean.

Improvements have been made along the full length of parkway in recent years — from guardrail replacement work to milling and paving, and safety and re-striping measures at the southern end of the route.

A full renovation of the northern section after more than a decade of planning remains the top priority, said NPS officials who noted that it became even more urgent after a 10-ft.-deep sinkhole led to lane closures and nightmarish traffic over five months in 2019. The hole measured about 30-ft.-long and 20-ft.-wide. Repair crews excavated 50-ft.-deep, replacing a 60-yr.-old, failed drainage structure. The repair cost $1.6 million.

As work begins on design for the newest GW Parkway upgrade, the NPS is wrapping up improvements on the southern portion of the parkway, between the city of Alexandria and Mount Vernon. The work includes a re-stripe of the roadway, new signage, and flexible posts at some intersections. To slow traffic, travel lanes were reduced to two northbound lanes, one southbound, and a turn lane in areas between Stratford Lane and Tulane Drive.

Park officials said the improvements on the 6.3-mi. southern section — the first portion of the parkway to open in 1932 — was done in response to public demand and a desire to reduce crashes and increase overall traffic safety. This section of the road carries approximately 17,000 vehicles daily but has more bicyclists and pedestrians.

Currently, there are no plans for roadwork in the central section of the parkway.