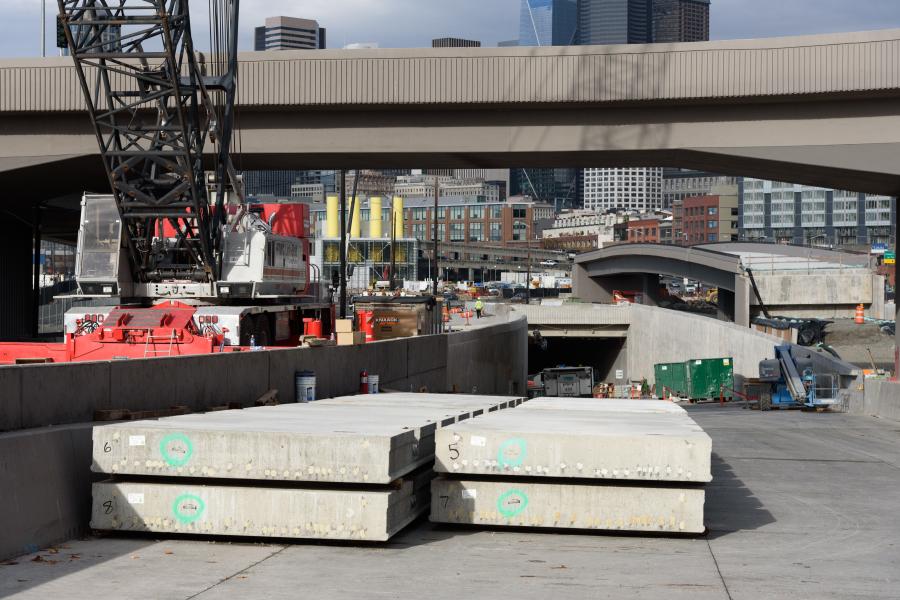 The precast concrete panels that will build the lower deck of Seattle's new SR 99 double deck tunnel began arriving in early November, marking the beginning of an important stage of the tunnel construction, said Laura Newborn, spokeswoman of the project.

Work on the lower deck will be markedly different from that on the upper deck, which has been under construction for some time and was more than halfway completed last spring when the tunneling machine known as Bertha finished mining for the tunnel in April.

“The contractor, Seattle Tunnel Partners, is building the upper deck and most of the tunnel's other interior structures using the 'cast in place' method,” Newborn said.

The tunnel's lower deck will be built with precast panels manufactured by Concrete Technology Corporation of Tacoma. Work on creating the precast panels began in early 2017 and is finished. The panels must now be transported to Seattle and installed in the tunnel.

The decision to use the precast panels was made to save time, said Chris Dixon, project manager of Seattle Tunnel Partners

The lower deck will be made up of 1,152 concrete panels. Each panel is 32 ft. wide — the full width of the two lanes plus shoulders — and roughly 8 ft. long. There are four types of panels, each serving a different role in the tunnel's future northbound roadway. The panels are transported by flatbed truck from Tacoma.

“Transporting 22-ton panels is inherently difficult,” Dixon said. “STP worked with the panel manufacturer to create a set of protocols used in transport of these panels and conducts quality checks at every step of the process to make sure every panel installed in the tunnel meets rigorous quality standards. STP uses cranes inside and outside of the tunnel to lift the panel, and special vehicles called segment movers drive segments into the tunnel during mining and transport the panels between cranes.”

Once the slabs are in place, crews will tighten them together, bolt them to the corbels, and later pour a layer of concrete atop the panels to create a smooth driving surface.

Rather than starting at one end or the other, crews are saving time by starting in the middle, Newborn said.

“Most of the tunnel's interior structures and its mechanical, electrical and plumbing systems are being installed in a linear fashion, starting from the south,” she said. “The lower deck will take a different route. Crews will begin installing the lower roadway at a point about two-thirds of the way through the tunnel from the south [a spot roughly beneath Virginia Street and First Avenue]. From there, they will move south as they place the deck panels.

“This starting point and direction of work is due to the spatial constraints involved in tunnel construction. During mining, a truck delivered tunnel ring segments to Bertha from the south. Building the lower deck would have blocked this delivery access.”

“So, while that work finishes up at the far north end of the tunnel, STP's plan will save time by working their way back south through the tunnel, then returning to finish up the northern third of the roadway. Assembling the lower deck is expected to be complete in 2018. The Washington Department of Transportation expects the tunnel to be open to traffic in 2019,” she said.

The $1.4 billion double deck tunnel is part of the Alaskan Way Viaduct Replacement Program. The viaduct, an elevated section of SR 99 in Seattle, was built in the 1950s, but age, wear and tear, and its vulnerability to earthquakes make replacement critical to public safety, according to a fact sheet from the Washington State Department of Transportation.

The Alaskan Way Viaduct Replacement Program includes project is led by the WSDOT, King County, the city of Seattle and the Port of Seattle. The Federal Highway Administration is a partner in the effort.

Other major elements of the $2.1 billion program in addition to the 2-mi. tunnel include:

• a mile-long stretch of new highway that connects to the south entrance of the tunnel, near Seattle's stadiums;

• a new overpass at the south end of downtown that allows traffic to bypass train blockages near Seattle's busiest port terminal;

• demolition of the viaduct's downtown waterfront section; and