After nearly three decades of planning, excavation work has now begun on the Tuxedo Farms project. 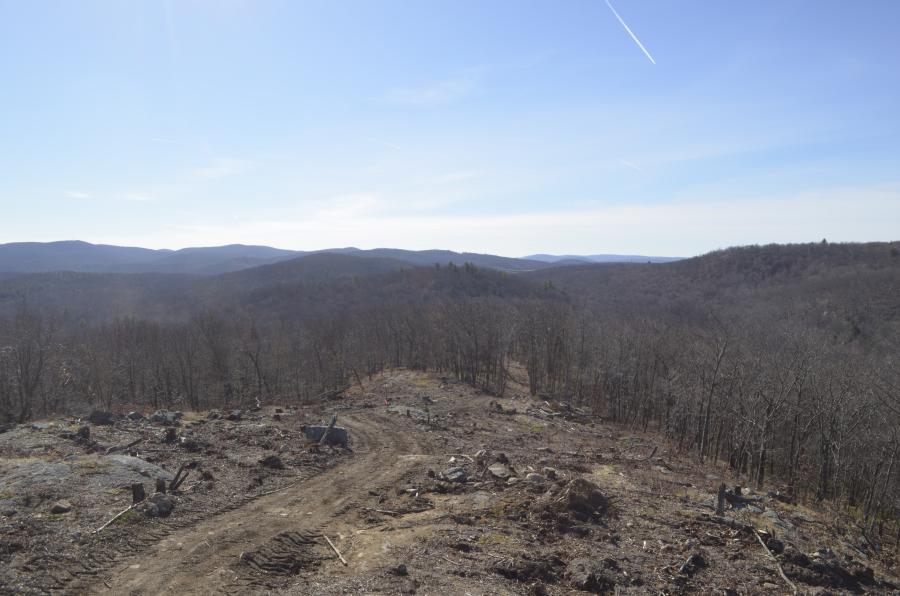 A view of the mountain range that will be enjoyed by the future residents of Tuxedo Farms. On a clear day, the top of the Freedom Tower can be seen 35 mi. away.

After nearly three decades of planning, excavation work has now begun on the Tuxedo Farms project. Work is expected to continue over the next 10 to 12 years and the estimated total cost of the development is anticipated to exceed $1 billion.

Located in Tuxedo, N.Y., approximately 20 miles north of the Tappan Zee Bridge, the building site expands over 1,250 acres of mostly hilly and hard rock terrain. Approximately 800 acres are being set aside as undisturbed for conservation, and initial excavation work will be in excess of $250 million.

Approximately 1,200 homes will be constructed, mostly single family dwellings, along with the construction of some townhomes and apartments. The homes will be built in three phases — the first phase will include 700 apartments, townhomes and single-family units. Townhomes are expected to price out at about $450,000 per unit with single-family homes ranging around $1.5 million.

Included in the project is $20 million worth of funding for a new wastewater treatment plant for the town of Tuxedo and Tuxedo Farms. The project also includes in excess of 100,000 sq. ft. of retail space and community structures such as a YMCA, along with recreational facilities, which would include playing fields, playgrounds, tennis courts and a pet park.

The developer is Related Companies, one of the largest real estate developers in the world, headed up by its president, Stephen Ross. Brennan Construction has the earthmoving contract for all of Phase 1, which involves initially blasting and moving 800,000 cu. yd. (611,644 cu m) of very hard rock (granite) and doing the related fills. All of the rock blasted on the site not used in the fills is being processed to an aggregate material. No rock or excess material is leaving the site.

The biggest challenge on this site is the rock itself, according to James Brennan, Brennan Construction president.

“It is very hard, very abrasive, and runs very deep. It really has been doing a job on our buckets and our undercarriage,” he said.

“We currently have Silver Valley Drilling & Blasting on site doing the shots [blasts] for us. Each shot/blast is yielding about 10,000 yards of materials.”

James's father, Thomas Brennan, has been in business since 1961. He incorporated Brennan Construction in 1986. At that time the company had one machine, which was used for utility work. The company grew gradually, inventory expanded, and in 1993, the company tackled its first subdivision. In 1994, Thomas went to work with James.

The company continued to experience strong growth until 2010, when the grips of the recession started to impact construction work in the New York Metropolitan area. Today, the focus of the company is almost entirely on heavy site work, the biggest of which is the Tuxedo Farms project.

Thomas Brennan continues to work for the company every day, as an equipment operator.

According to James Brennan, one of the biggest challenges of the company's operation today is getting employees.

“A good number of our new hires are recommended by current employees. In order for that to work, we have to be involved in long-term projects so we can offer employee stability. With the magnitude of this job, we anticipate being here for the next ten to twelve years.

“Our reputation is for never laying off good employees and we have been able to maintain that policy except for the worst years of the recession. During that time, we went from 115 employees to 15. That period was devastating to our company, but we were able to survive.”

One of the reasons the company survived is that over the years it had financed and/or lease purchased much of its equipment, according to Brennan.

“As the recession slowly developed, we did not purchase any new equipment and we were able to pay our way out of the equipment that we already had. So, by the time the recession had deepened we had no debt.

“For a while we chased public works projects, but because our competitors were also hurting, the number of contractors bidding on these projects increased dramatically and the amount of the bids decreased dramatically. We made the decision not to bid on projects that were not profitable just to keep our machines and people working. Without the cloud of debt hanging over our heads we made the decision to go into hibernation and we went from doing $25 million a year of business to $4 million. We tackled one project at a time and managed it well.”

Brennan Construction is back growing and very healthy again and is moving ahead full speed, Brennan said. Many of its resources currently are on the Tuxedo Farms project, while a second crew is working on the Kearney Development in Carmel, N.Y., which is about an 80-unit project.

Brennan Construction currently has 35 employees and about 40 machines in its fleet, which is made up of overwhelmingly Caterpillar equipment.

“We have stuck with Cat equipment for a number of reasons. We feel that they are the strongest equipment dealer in the region with the greatest resources to support us. We have moved more and more towards renting equipment and we've learned that there is a big difference in the equipment that we rent from H.O. Penn and what we get from some other dealers. H.O. Penn's rental fleet is made up of new or near new machines. They come off the truck, go immediately to work, and stay working. We've not had that experience elsewhere.

“When we purchase machines from H.O. Penn we see value. I've put as many as 20,000 hours on Caterpillar machines and still gotten top dollar for them when they are sold. Caterpillar parts availability is unmatched and the brand holds value. Most dealers have no comprehension of what it costs to have a machine down. H.O. Penn gets it.

“We know that H.O. Penn has been around for nearly 100 years. My dad dealt with H.O. Penn when he started the company. He loved the Caterpillar track loaders. In fact, we were one of the last contractors in the area to use track loaders.

“We are also very appreciative of the services that H.O. Penn provides. My background is as an equipment operator and a site supervisor. I am not an equipment technician and I have to rely very heavily on H.O. Penn's technicians. They are very well trained and do great work. Cat Financial has provided us extraordinary financial resources and they know how to put together a package that meets our needs.”

H.O. Penn is the authorized Caterpillar distributor for the lower 13 counties of New York State and the state of Connecticut. For more information, visit www.hopenn.com.