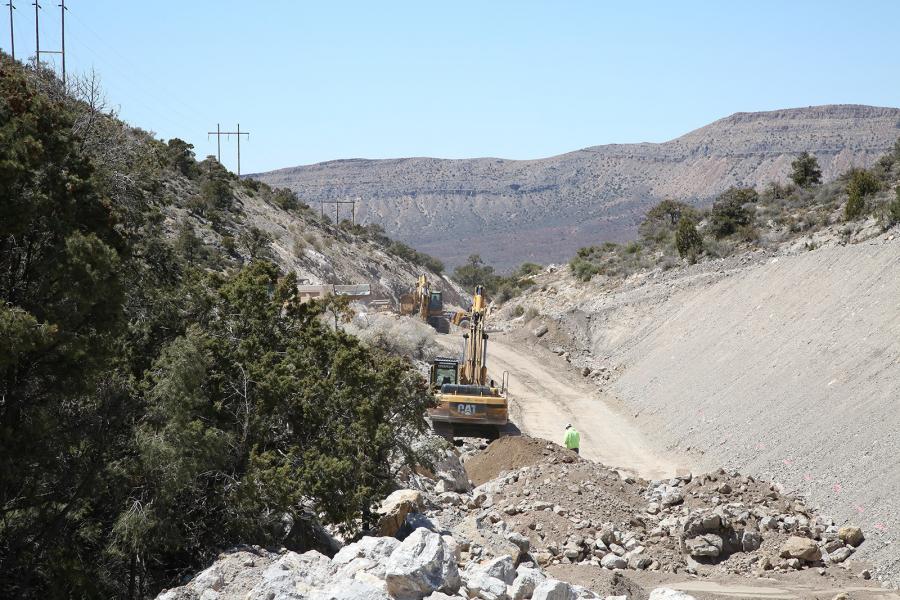 Construction crews from Aggregate Industries-SWR Inc. needed 58 blasting events to get through stubborn bedrock on the SR 160 project in Nevada.

Construction crews from Aggregate Industries-SWR Inc. have just completed a $59 million highway widening project in Nevada that posed some tricky challenges, but is expected to make a critical rural stretch of State Route 160 significantly safer for the 8,600 vehicles that travel it daily. 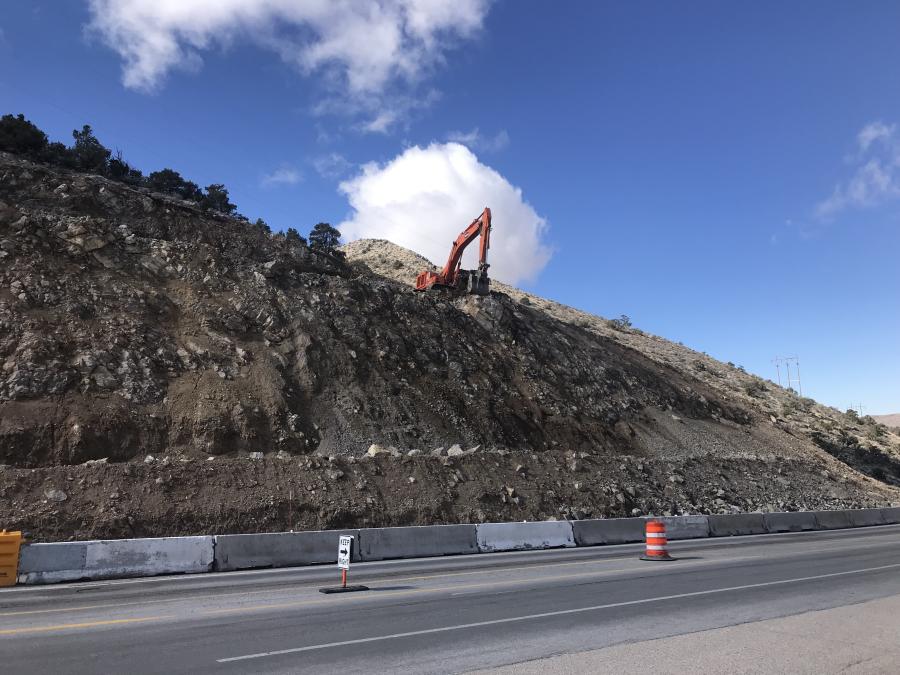 The final phase of the two-phase project widened a 6-mi. stretch of asphalt highway from two to four travel lanes between mile markers 16 and 22, creating a safe passing lane for slower moving traffic while altering the roadway geometry to lessen twists and turns. The work being completed by Aggregate Industries-SWR Inc. also entailed rehabilitating 22 mi. of deteriorating roadway from near the Nye County line to the Mountain Springs community, said Tony Illia, public information officer of the Nevada Department of Transportation (NDOT).

"This vital route serves as a crucial economic link between Las Vegas and Pahrump," Illia said. "Rapid development, additional residents and increased travel has ratcheted the need for freeway improvements. This project subsequently expanded the roadway while enhancing motorist safety for improved motorist mobility and reliability."

The topography of the area posed some tricky challenges.

"It's located on Potosi Mountain, 30 miles southwest of Las Vegas in the Spring Mountains," Illia said. "That's at an elevation of 8,517 feet, so it meant hauling materials and equipment that would take some advance planning and coordination. The other thing is the slopes through the mountain range were very sheer. They had a sharp angle so in order to widen the roadbed, it meant removing some fractured bedrock."

In some cases, crews were able to do that using conventional machinery, such as excavators with hydraulic hammer attachments and haul trucks. The material they weren't able to remove using the equipment was removed using dynamite. 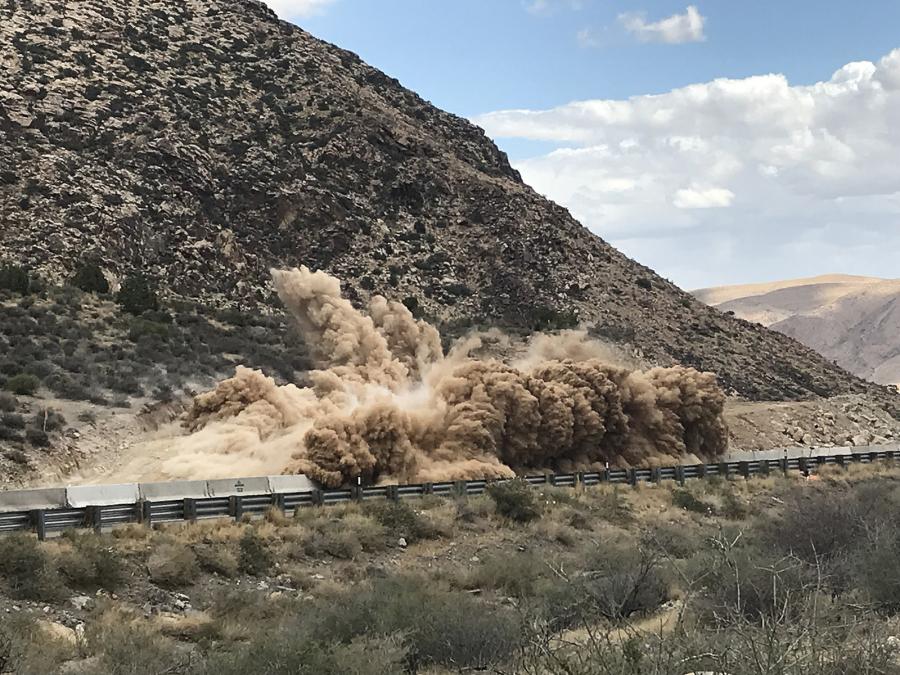 "This was something fairly new to us here in southern Nevada," Illia said. "We don't have the opportunity to do a whole lot of blasting of this sort. So we did roughly 58 blasting events, some bigger than others, but all required intense coordination and public communication."

NDOT was permitted to close traffic for up to two hours in order to remove the debris that spilled out onto the roadway from the blast, but Illia noted that they were usually able to get traffic moving within 30 to 60 minutes. They alerted traffic to the coming shut downs by working with local media and using messaging signs, mobile messaging signs, social media and through a distribution list of local stakeholders, such as the Las Vegas Convention and Visitors Authority and the highway patrol.

On-site Grizzly rock screens and crushers were used to crush the blasted materials to be used for the aggregate road base.

Other project enhancements include the placement of 5 mi. of raised concrete median barrier, installing new signage and flattening side slopes for safer turnouts. Nearly 30 acres of raw desert was hydro-seeded, and 784 new tree saplings and shrubs were installed, with 1,000 cacti and yuccas being salvaged and replanted. New frontage roads were constructed in the Mountain Springs Community, along with improved intersection lighting and an emergency signal for the Clark County Volunteer Fire Station #79. 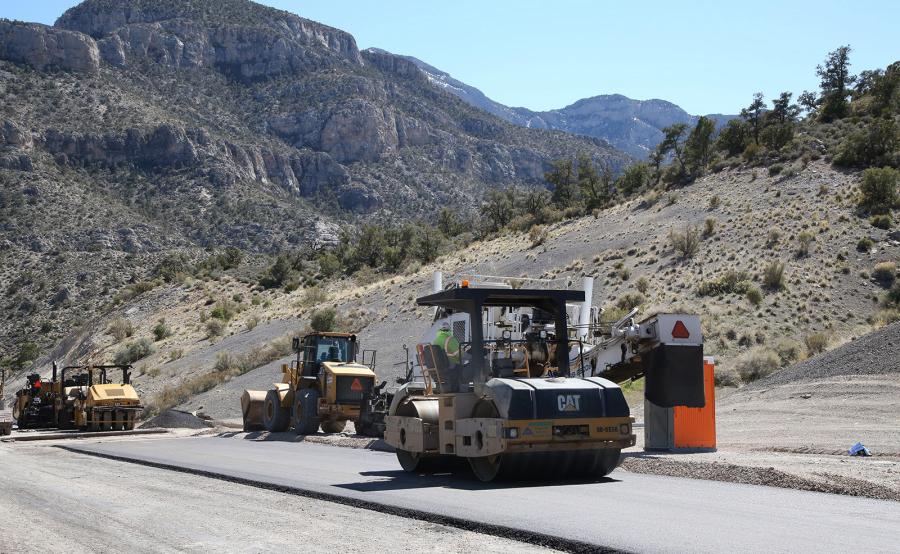 In addition, new cattleguards and an underground wildlife crossing, along with deer and tortoise fencing, were installed near mile marker 18. Crews also placed boulders, riprap and decorative rock for landscaping and aesthetics to help with erosion control and storm water runoff.

The $16.5 million phase one of the project expanded 5 mi. from two to four lanes between mile marker 10.89 and mile marker 16.63. Aggregate Industries-SWR Inc. also was the general contractor on that phase. The improvements flattened side slope shoulders for safer vehicle turnouts while installing new drainage pipe and tortoise fencing. It was completed in 2017.

"They did a great job," said John Koenig, chair of the Nye County Board of Commissioners and member of the County Regional Transportation Commission. "It will greatly enhance the safety of the road and make Pahrump a more attractive place to visit."