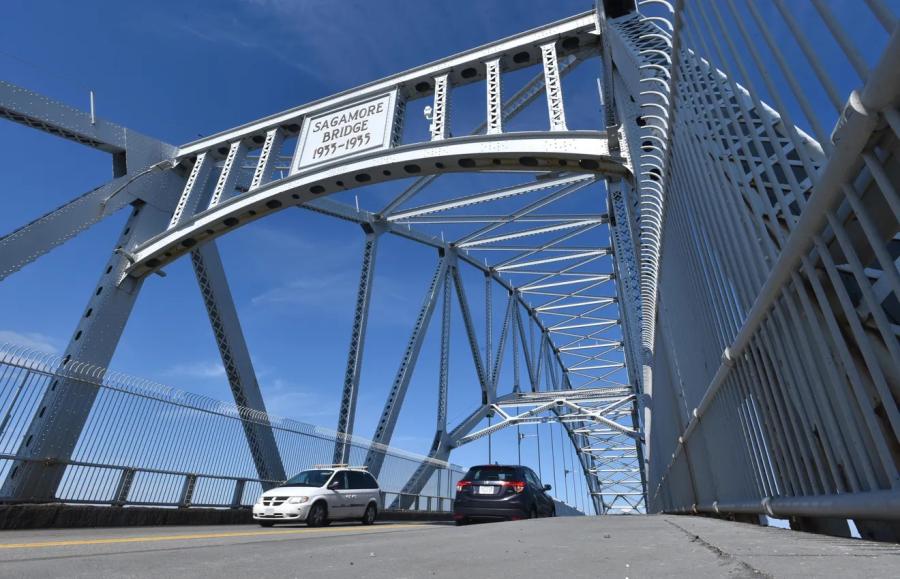 The U.S. Army Corps of Engineers is working with state transportation officials to apply for $1.5 billion in federal infrastructure money to replace the aging Sagamore and Bourne bridges. (Steve Heaslip/Cape Cod Times photo)

So, is the money on the way?

The U.S. Army Corps of Engineers (USACE), which owns the 87-year-old bridges, is working with officials from Massachusetts Department of Transportation (MassDOT) on an application for a part of the $27 billion set aside for bridge replacement and repairs in President Biden's infrastructure bill, which he signed last November.

Neither federal nor state officials can say if the USACE's application for about $1.5 billion will be successful, but the application is one of the best in the country, Keating said during a recent meeting with the Cape Cod Times.

He based his optimistic assessment on the fact that the USACE is working with the state, which already earmarked $350 million in bonds for the bridge projects as part a $16 million transportation bond bill signed by Gov. Charlie Baker in January 2021.

But state and federal agencies need to get a jump on construction, Keating explained, before the bridges need major rehabilitation. He said that construction on at least one of the bridges would need to begin within five years.

The Times reported that the uncertainty of whether and when the bridge project will move forward has local officials, residents and businesses anxious to know how it will affect them.

Selectmen in the town of Bourne, Mass., have spoken out to push the federal and state governments to be more communicative about bridge design and plans. Chairman Peter Meier said in early March that Bourne should have "a seat at the table" in design discussions.

"Communication to date has not been the best," he noted to the newspaper. "The bridges affect daily life in Bourne. Ultimately, we who live here are impacted the most."

Marie Oliva, CEO and president of the Cape Cod Canal Region Chamber of Commerce, said that the uncertainty of when the bridge replacement project will move forward is causing concern for businesses and residents in the area.

"There's a big question mark there," she told the Times.

Planning must involve more than new spans, added Bourne Selectman Jared MacDonald, "to include off-ramps and the way traffic has to flow around the canal. We can't just change everything to make everyone go faster to get down-Cape."

State Rep. David Vieira, from Falmouth, said during the meeting that the $350 million state bond bill will deal with road changes, and there will be a state project manager for those projects.

The town and the Bourne Recreation Authority must know what is going on before money is spent, he contended, especially with the authority considering design for amenities and possibly buildings at Scenic Park below the Bourne Bridge.

Extensive Enhancements Needed on Both Bridges

In speaking with the Times, Keating talked about the structural integrity of the bridges and cited a 2020 USACE study, which found that replacing the Bourne and Sagamore bridges would be less expensive than doing major rehabilitation on them.

Scott Acone, deputy district engineer at the New England district of the USACE, said the Sagamore Bridge will likely need a big upgrade by 2025, followed by the Bourne bridge by 2030, at the earliest.

Without a doubt, replacing the bridges will interrupt the lives of Cape residents and business owners near the structures and everyone traveling on and off Cape Cod.

"This is a major issue, it affects the very livelihood of a quarter of a million people who live here year-round," Keating said.

According to Acone, the joint application, if granted, could pay for up to half of the replacement costs for both structures, which collectively will cost about $1.5 billion.

Both Keating and Acone told the Times that they are optimistic the joint application stands a good chance of being approved.

"Of all the applicants, that [one] is in the best position — maybe in the country," Keating said.

The reasons for that are not just because state and federal officials are working together, Acone noted.

He explained that because the Bourne and Sagamore bridges are aging infrastructure that serve as evacuation routes for the Cape and the Islands, the project is a strong candidate under the language of Biden's bill.

Once the new bridges are built, the state will take ownership and support them, Keating told the Times.

Project Conceived as Having Multiple Lanes

In concept, the replacement bridges will have wider travel lanes, as well as a breakdown lane, a multi-use lane for pedestrians and bicyclists, and ones where drivers can accelerate, decelerate, and merge.

However, as the design phase moves forward, the USACE will take comments from the public about the project, Acone said.

If the project does not receive funding, the Cape could find itself in an untenable position, said Steven Tupper, deputy director of the Cape Cod Commission and Transportation Program director.

"The importance of the bridges to Cape Cod cannot be overstated," he said. "It's really critical to the ability of the region's transportation system to meet the current and future demands of Cape Cod's residents, visitors and businesses."

Tupper warned that if the Cape finds itself in a position where a bridge needs to be closed for repairs without an alternative, it could cause unacceptable delays for motorists.

The bridges affect everyday activities such as bussing children to school, local emergency transportation and the delivery of goods and services, he said.

"When you have an issue with either of the bridges, it impacts all of the communities in our region," Tupper added.