Agreement Reached on Deal to Resume Work on $3.9B Terminal at JFK Airport 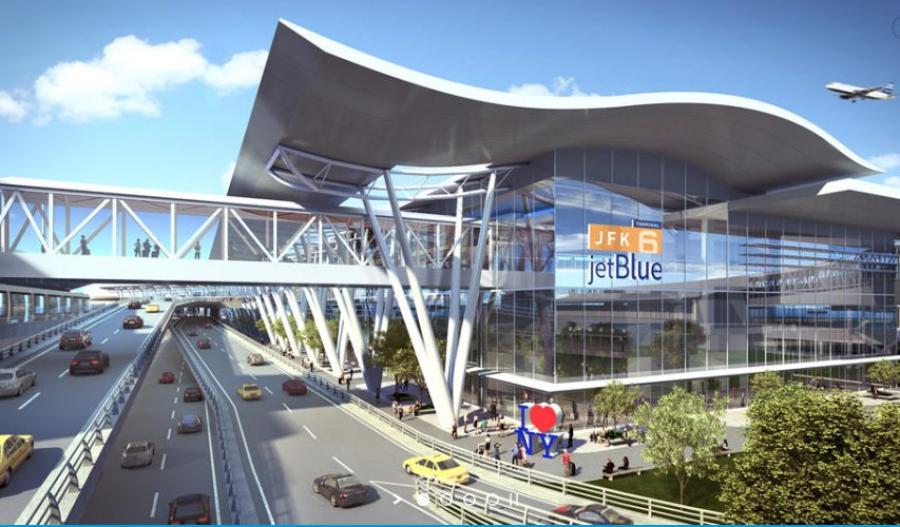 Construction of the new Terminal 6 is slated to begin in mid-2022 and the first new gates are scheduled to open in 2025.

A revised agreement on key terms has been reached between the Port Authority of New York and New Jersey, and JFK Millennium Partners and JetBlue Airways, to build a new Terminal 6 at John F. Kennedy International Airport. The new facility will be an anchor on the north side of the airport.

The announcement was made Aug. 3 by New York Gov. Andrew Cuomo.

Plans called for the massive new terminal to initially break ground in 2020, but due to the impact of COVID 19, the project's private investment was threatened by the drop in air travel and the bleak, short term projections for the industry. As a result, the construction start did not occur.

The newly restructured deal marks a major step forward in the ambitious plan to transform JFK into a unified 21st century global gateway and, according to a press release from the governor's office, "is a testament to the partners' commitment to the future of the airport and New York."

The Port Authority hopes to soon finalize and enter into a lease agreement with JMP, a private consortium, for the construction of the new $3.9 billion, 1.2 million sq. ft.terminal.

The full cost of the terminal's construction will be privately financed by the JFK Millennium Partners consortium. It is to be built on the site of the former Terminal 6, which was demolished in 2011, and the aging Terminal 7, which will be torn down after British Airways relocates to Terminal 8.

The new gateway facility also will connect to the JetBlue-operated Terminal 5 and be equipped with capacity for 10 new gates, as well as bright and airy check-in halls and arrival spaces designed to enhance the customer experience. More than 100,000 sq. ft. of commercial dining and retail amenities, lounges, and recreational spaces will be under one roof. The new facility promises to also incorporate the latest advances in both sustainability and security.

According to the governor's announcement, construction of the new Terminal 6 is slated to begin in mid-2022 and the first new gates are scheduled to open in 2025.

"The transformation of JFK Airport into a world-class gateway is another distinct testament to New York's comeback and to our determination to build back better," Cuomo said in the statement.

"This historic private investment will not only fortify New York's reputation as our nation's front door to the world, but also sets an example for how this country can tackle bold infrastructure projects that will jumpstart our economy with thousands of good-paying jobs even amid profound challenges like the pandemic."

JFK to Feature Capacity for Millions

In 2018, the Port Authority began exclusive negotiations for the development of two major new international terminals, one each on the airport's north and south sides, that would lead the transformation of JFK and increase the airport's capacity by at least 15 million passengers a year to accommodate projected growth in the decades ahead.

With the pandemic raging across the country in 2020, air passenger volumes at JFK declined by as much as 98 percent and have only recently increased to levels that are still 25 to 30 percent down from pre-COVID-19 figures, the release noted. The new agreement, the governor said, reflects a significant vote of confidence by the private sector in the future of JFK Airport and its importance to both New York and the global travel industry.

COVID-19 is projected to result in a $3 billion revenue loss for the Port Authority over the course of 24 months from March 2020 to March 2022, significantly cutting into its ability to proceed with its $37 billion capital plan to rebuild, revitalize and maintain critical infrastructure assets across the region in the time originally planned.

The Port Authority Board will be asked to authorize $130 million to build enabling infrastructure for the Terminal 6 project, including airside improvements, and utility enhancements such as electrical support for the project — part of the agency's previously allocated capital to the redevelopment of the airport. Despite the pandemic's harm to the Port Authority's financial picture, the agency's monetary contribution to the Terminal 6 project is scheduled to go forward, pending board approval, given the leverage of nearly $4 billion in private financing to construct the new facility.

The governor's office expects the development of Terminal 6 to result in more than 4,000 direct jobs and direct payroll wages of $1.9 billion. The total economic activity impact from the project, including indirect effects such as the local market participation of employees of suppliers, amounts to nearly $2.8 billion in total wages and $6.3 billion in total economic activity.

The governor's JFK Vision Plan, initially unveiled in January 2017 and based on the recommendations from a state airport advisory panel, calls for an overhaul of the airport's hodgepodge of eight disparate terminal sites into one unified JFK Airport by demolishing old terminals, utilizing vacant space, and modernizing on-airport infrastructure, while incorporating the latest in passenger amenities and technological innovations.

The Vision Plan also calls for increasing the number and size of gates, improving parking availability, an array of airside taxiway improvements to allow for more efficient planes and reduced gate congestion, upgrading the AirTrain JFK system to handle increased passenger capacity, and enhanced roadways on and off the airport. The latter includes better access to JFK from regional roadways, particularly the Van Wyck Expressway and the Grand Central Parkway, including the Kew Gardens Interchange.

The governor's press release also noted that plans for the new Terminal 6 build on the momentum of other major components of the airport's transformation, including the $1.5 billion expansion of Terminal 4, led by Delta and JFK International Air Terminal, which was approved by the Port Authority's Board in April. Additionally, work began in December 2019 on the $344 million expansion of JFK's Terminal 8, led by American Airlines, which operates the terminal, and British Airways, which will be relocating to Terminal 8 from Terminal 7.

"JFK's new Terminal 6 is exactly the type of economic boost our communities need," noted New York City Councilwoman Selvena Brooks-Powers. "We have worked hard to secure valuable contracting opportunities for MWBEs and local businesses on this project, and now that work is coming to fruition. As we continue to recover from the pandemic, JFK is providing vital economic opportunity for the businesses and workforce of southeast Queens."

Gary LaBarbera, president of the Building and Construction Trades Council of Greater New York, said the agreement to restart the Terminal 6 project is a major step forward in the redevelopment of JFK International Airport into a 21st century gateway.

"This plan will create thousands of good, middle-class careers with benefits for New York's tradesmen and tradeswomen and will help jumpstart the city's economy as we continue to rebuild from the economic and public health crises," he commented. "We're grateful for Gov. Cuomo's leadership in advancing this monumental project, and our members look forward to turning his vision for New York's future into a reality."

JFK International Airport is one of the region's most powerful economic engines, supporting roughly 300,000 jobs that pay $16.2 billion in wages annually while generating $45.7 billion in yearly sales. Prior to the onset of the pandemic, the airport set a record with 62.6 million passengers in 2019.