"In many ways the average traveler would not contemplate, the general aviation ramp project is just as important to our airport system,” said Brad Christopher, assistant director of airports. 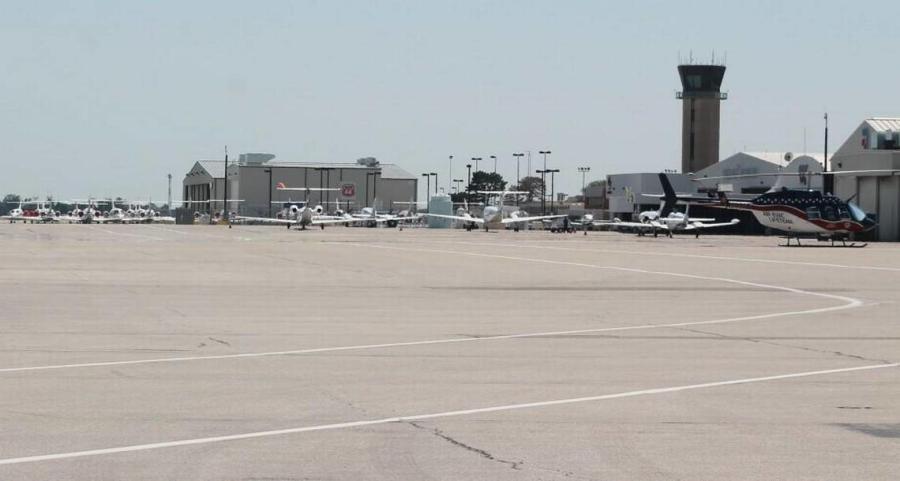 Wichita Eisenhower National Airport officials are in the early stages of what will be the airport's largest project since construction of the $200 million terminal building and parking garage two years ago.

The estimated $35 million project will replace the concrete apron that serves eight companies on the east side of Eisenhower and which employ hundreds of Wichitans. Those companies include Yingling Aviation and Signature Flight Support, which provide airplane de-icing and fuel, respectively, to the six commercial airlines that fly to Eisenhower.

Nor will it capture the level of interest that construction of the new terminal did.

But it will have a “big, local economic impact,” he said, and it's an important project because the apron supports general aviation and military aircraft operations at Eisenhower that last year totaled nearly 78,000.

“Most of our airport projects will not have that sex appeal (of a new terminal), but in many ways the average traveler would not contemplate, the general aviation ramp project is just as important to our airport system,” Christopher said.

Not only does the airport derive revenue from general aviation tenants' rent, it also earns 12 cents from every gallon of fuel pumped by Yingling and Signature, he said.

“It's their fair share and their part of maintaining the airfield and services we provide,” Christopher said.

The breadth of the concrete replacement for the apron is equivalent to 11 miles of a two-lane state highway, he said.

Christopher said the base of the apron pavement dates to 1954, when the airport was constructed. Over the years, that base has been paved and patched repeatedly.

Over that six decades, the aircraft using that apron have changed, too.

“Airplanes are consistently getting bigger and heavier, and the ramp they built 60 years ago – there was no such thing as a 737,” said Yingling president Lonnie Vaughan, referring to the Boeing narrow-body jets used for charter flights that stop at Yingling for fuel and to drop off and pick up passengers.

The decision to move forward on the project comes after a report last year identified the apron “pavements” as being in “poor condition.” They “have reached a threshold that triggers major rehabilitation of reconstruction,” according to a city document.

The Wichita City Council, acting as the Wichita Airport Authority, in early June approved a budget of $850,000 for the study phase of the apron project, of which $609,423 will be paid to engineering consulting firm Garver LLC of North Little Rock, Ark.

The study will be paid for through a combination of Federal Aviation Administration grants, airport revenue and the issuance of general obligation bonds paid back with airport revenue.

The study, expected to last through spring 2018, is necessary for a variety of reasons, Christopher said. Regulations and technology have changed dramatically in more than six decades, so an apron that was constructed in the 1950s would be far different than one in 2017.

“There weren't a heck of a lot of standards back then,” he said.

The study will also look closely at where pavement is needed – and where it is not.

“Perhaps (there) are places where we've got too much pavement,” Christopher said.

It will look at ways to improve traffic along the apron – both vehicles and airplanes – and will account for the larger and heavier charter and business jets that currently use it. The study will offer a “plan that makes … financial sense.”

“We want to be careful with our money and the FAA's money,” Christopher said.

Airport officials said the biggest unknown with the apron project is when they'll get the money to do it.

Christopher and finance manager Jean Zoglman said 90 percent of the estimated $35 million project will be paid for by Federal Aviation Administration grants, with the remaining 10 percent – or $3.5 million – paid for by the airport. None of it will use tax dollars.

“In a perfect world, we'd like to ask the FAA for $30 million,” Christopher said.

But it isn't a perfect world, and Christopher and Zoglman aren't sure they'll get all the money at once. That means the airport has to be flexible enough to work with whatever amount they get from the FAA and perhaps do the apron project in sections over several years.

FAA funding for airport capital improvement projects isn't infinite, Christopher said, and apron projects generally get lower priority for funding than runways. So if the airport learns that it will get $8 million in funding, then officials will look at which parts of the apron need replacement the soonest.

“You may … see us move around,” Christopher said. “It may not be lineal.”

Zoglman said FAA officials have known for awhile that the airport would be coming to them for funding to replace the apron.

“We've been talking to them, talking extensively,” she said. “You've got to be on their radar.”

Because the study still needs to be completed, the soonest that work could begin would be 2019. And again, that depends on how much funding the airport can get from the FAA.

“We're going to do the work that they are going to fund,” Christopher said.

In the meantime, airport officials are trying to prepare tenants for the project.

Last week, they held a group meeting with the tenants, followed by one-on-one meetings.

For some, such as Bevan-Rabell, it expects the project to have minimal impact on its business.

McIntyre added, “I do like the idea that they are spending so much time researching and getting tenant input.”

Ray Koenig, president of LeaseCorp Aviation, said he doesn't expect the project to have any effect on his company's four aircraft hangars because the project stops before it gets to LeaseCorp.

“It was good information for us to know,” he said. “It's a pretty all-encompassing project.”

Koenig said that, from what he learned at the meeting, the project is likely to have the biggest impact on Yingling Aviation and Signature Flight Support and could be disruptive to them.

“I would envision they'll have me tore up a half or a third at a time,” Yingling's Vaughan said.

He said he thinks airport officials are sincere about working with his 100-employee company to minimize the disruption of the apron reconstruction.

“This is a complicated project … (and) there's going to be some pain in it,” he said.

The pain will likely come with people flying into Wichita to conduct business who park and refuel their aircraft at Yingling. In those instances, Yingling is looking at whether it could park their aircraft on the taxiway just east of the apron and have vehicles and drivers ready to ferry those people to and from their airplanes.

Or, Vaughan said, maybe its next-door competitor, Signature, could let Yingling use some of its ramp, and vice versa.

“I think the fact of the matter is we're all going to have to cooperate and have pain equally,” he said.

In other instances, Yingling will have to figure out what to do with aircraft parked in its rented T-hangars that are just north of Yingling's ramp. When work to the apron happens around those hangars, owners won't have to access their airplanes.

“The airport is being very cooperative and trying their best to keep us in full, running operations,” Vaughan said.

For all the disruption the project will cause companies such as Yingling, Vaughan said it's worth it. He said some of the patchwork the airport's done to the ramp even from just a couple of years ago is starting to show signs of breaking down, and when concrete starts to crack, “it goes downhill quicker.”

“Absolutely it is necessary to get it done,” he said. “While our ramp is servicing us now, it has needed to be replaced for quite awhile.”