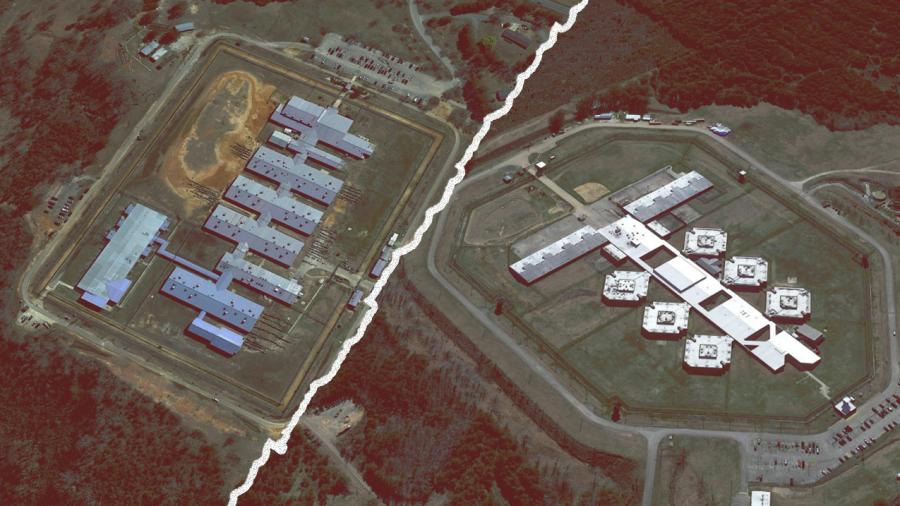 House and Senate lawmakers in Alabama met informally Sept. 8 to discuss the latest version of a Republican plan to build three new prisons in the state, before renovating some existing facilities and closing four others.

The draft proposal includes two new men's prisons, each with 4,000 beds each: one in Elmore County and another in Escambia County — both of which are much larger than any of Alabama's 14 current prisons. In addition, a women's facility would later be built in Elmore County. The plan also calls for buying or leasing a vacant private prison in Perry County, AL.com reported.

What remains murky, though, is how much money will Alabama's taxpayers have to pay for the new and refurbished prisons.

An earlier version of the bill, obtained by Alabama Political Reporter (APR), would have used a portion of the state's property and alcohol taxes to secure bonds to pay for construction and renovations.

According to APR, the latest draft proposal includes a bond issuance of up to $785 million to fund the first phase of the planned construction, which includes both new prisons for men.

The bonds would be issued by the Alabama Corrections Institution Finance Authority, which would include Gov. Kay Ivey, the commissioner of the state Department of Corrections (ADOC), the state finance director, the chairs of the House and Senate general fund committees, one legislator picked by the House and Senate minority caucuses, and the director of the Bureau of Pardons and Paroles.

Debt service is estimated at $50 million a year.

Attempts by AL.com to reach several lawmakers to discuss those estimates, and both versions of the draft legislation, had been unsuccessful as of Sept. 9.

APR asked Ivey's office the day before if the governor had an idea of what the total estimated cost of the proposal would be. Her press secretary, Gina Maiola, declined to answer on the record, and directed the news site to a letter Ivey wrote to members of the Legislature.

The Montgomery Advertiser reported that Ivey's letter read, in part, "Many of our existing facilities face severe space constraints in providing important services such as mental health services, substance abuse treatment and educational and vocational programs. Experience teaches that one powerful way to reduce crime is to prepare our current inmates for life outside prison once they are paroled or complete their sentence."

Federal funds also might help cover the costs, AL.com noted. In July, ADOC Commissioner Jeff Dunn asked the U.S. Treasury Department if federal funds Alabama received from the American Rescue Plan Act, a coronavirus relief package passed by Congress, could be used for prison construction, in part because it would mean improved health care for inmates.

Prison Construction to Be Done in Three Phases

According to the current bill, within one year of the completion of the Phase 1 prisons in Elmore and Escambia counties, four prisons would close: the Hamilton prison for the Aged and Infirmed in Marion County, the Elmore and Staton prisons in Elmore County, and Kilby prison in Montgomery County.

The second phase of the prison construction plan is to include the building of a new 1,000-bed women's facility, to replace the Julia Tutwiler Prison for Women, and renovations of prisons in Limestone and Jefferson counties, along with upgrades of one prison in either Barbour or Bullock counties.

Phase 2 would start after the completion of at least 60 percent of Phase 1 and the certification that funds are available.

"Phase II projects would be funded through sources appropriated by the Legislature on a pay per project basis," reads a synopsis of the bill included in a Sept. 7 AL.com article.

An evaluation by the ADOC, in conjunction with the Legislature's prison oversight committee, to determine if more prisons should close, would make up Phase 3 of the proposal.

Ivey, the ADOC and state legislators began work on the proposal after the governor's plan to lease and operate prisons built and owned by a private developer, CoreCivic collapsed in June because the company could not obtain financing.

Some of the work from that two-year-long process, though, will be incorporated into the new plan, AL.com noted.

The general contracting companies that were picked to build the prisons under the lease plan could get the contracts to build the new Elmore and Escambia prisons through negotiations with the state, according to the bill summary. Competitive bidding would be required on all site work and subcontracted work.

Alabama officials have discussed options for building new prisons for at least the last five years as the state's facilities are overcrowded and understaffed. The ADOC regards many of them as being in poor condition with outdated designs and would not be financially feasible to renovate. The average age of Alabama's prisons are 44 years.

In an interview with AL.com, Sen. Clyde Chambliss, a Republican from Prattville, said he was optimistic the state is close to a solution on building prisons that Alabama would own on existing state property. Chambliss, one of the lawmakers involved in the discussions that led to the draft bill, said he hoped lawmakers could meet in a special session in late September of early October to debate the prison plan.