Stakeless grading is pretty straight forward, but for many contractors it’s become essential to their operations. 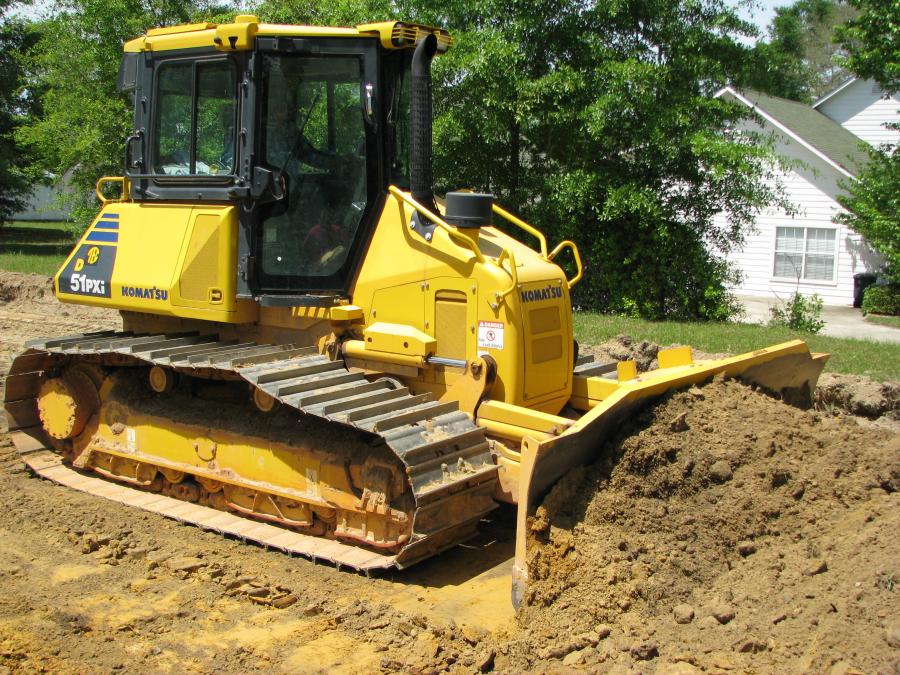 A second Komatsu intelligent machine control dozer, a D61PXi, was brought in by Gulf Hauling & Construction for grading work for a new Saraland School District building site in Mobile County, Ala.

Stakeless grading is pretty straight forward, but for many contractors it's become essential to their operations. Without it, they rely on setting hubs, which is time consuming on projects. A hub is a 6 to 8-in. piece of wood — square on the end, which is driven into the ground with a marker ribbon tied at the top. This is required every 10 feet, for road or parking lot grading, for the length of the area to be graded, which could be more than 500 to 1,000 ft. The contractor then relies on string lines and tape measures to do a physical layout. This process is necessary before material can be moved on the project.

Enter technology incorporated into the newest Komatsu machines with intelligent machine control. Komatsu refers to this new technology as “smart construction” and many contractors are calling it a “smart investment.”

“We were about 50 percent complete with our work on this project when we took delivery of our first intelligent machine control dozer — a Komatsu D51PXi machine, which started as a demo model. I was open to the idea of giving this machine a try. I had been around many of the aftermarket systems that are being put on the machines now, so I had familiarity with machine control. But our veteran guys weren't very open to trying some of this new technology. That was a bit of a challenge. The very first day we had the machine was the day we were supposed to be putting out hubs and getting ready for our base material to be dumped. I talked Mike, our most veteran operator, into trying the D51PXi with machine control.”

Mike Jones is the superintendent of Gulf Hauling & Construction and a 40-year veteran operator, and is the primary operator of the Komatsu D51PXi in the company's equipment fleet. He warmed up to the new intelligent machine control rather quickly.

“I can cut the shoulder and road grade without any laborers for site set up, the machine does all the work by itself,” said Jones. “To be honest with you, I didn't even want to try this machine. They just said 'take it and try it.' The more I used it, the more I liked it. Now, I'm the one that runs this machine. We've had two jobs where we never had a single laborer that needed to set grade hubs. That saves a lot of time and money for the company. It's a balanced machine and it runs well.”

From that day on, which was a year and a half ago, the company's crews have not driven another hub.

“Ever since then, all of us have been completely sold on this machine,” said Michael. “It takes the labor out of setting grades, setting grade stakes, setting hubs, laying out the curbs and gutters — all of it.”

“The operator can see all of this from the machine and doesn't need to get off and talk to us about everything that's going on, figure the grades on paper and then stake it out. The new technology just makes everything more efficient and we don't need as many people working on grading projects as we did just a couple years ago,” said Michael.

Despite their initial reluctance to try the new dozers, Gulf Hauling & Construction's operators are using the intelligent machine control.

“I would venture a guess we are saving 30 to 40 percent on time, labor and equipment cost,” said Michael. “This also means that the workdays aren't as long as before and more gets done with this technology. Do it better with less people, that's where this investment is paying off for us.”

Jones credits Tractor & Equipment Company (TEC) for helping him realize the potential of the new technology, and it was Chris Howard of TEC that initially talked him into trying the dozer.

“I've run all kinds of machines, and not for the benefit of him [Chris Howard of TEC], and you all standing here this is one of the best dozers I've ever run. It just makes any operator better.”

Michael also has been pleased with the level of service they've received from TEC.

“Buddy [Averett] has been extremely helpful and willing to help at any time we need him,” said Michael. “He's just a phone call away. Usually, nine times out of 10, he can help you with any issue over the phone. If he can't, he'll be there in no time to help you through it. We have been very impressed with the service we get with Buddy and TEC. Most issues turn out to be our issue and not a machine issue. Stuff we've created such as input errors on set-up.”

Mike Eubanks, father of Michael Eubanks Jr., and one of the owners of Gulf Hauling & Construction, also was involved with the purchase of the machine, and said his son Michael was the one who championed the purchase.

“We had talked with Chris [Howard] about the machine,” said Mike Eubanks. “He brought it out to a job site, and we were all impressed with it. What sold me was the absence of external antennas, cables or brackets. The set up time sets this machine apart. Every day you save so much time not having to install the external antennae and not having to hook up wires and what not.”

Currently, Gulf Hauling & Construction is running both the Komatsu D51PXi and D61PXi intelligent machine control machines on a job site in Saraland, Ala. The first machine lead to a second rental machine for the company.

“The D51PXi has been in the fleet for about a year and a half,” said Michael. “It's so user friendly. Set up takes just a couple minutes on the integrated machine. It's a world of difference.

“The technology is paying for itself. After more than a year with the machine, we're probably going to break even on the extra investment in the intelligent machine control package. The integrated machines go from job to job as needed to make the most of the company's investment and to maximize productivity for grading on all projects.”

Michael also is pleased with all of the sensors and safeguards the intelligent machine has, and that his crew doesn't have to physically get out of the machines.

Michael foresees a day when these machines are a given on all job sites in the future.

“When you can check behind the grade of a dozer with a rover and data collector and the operator is dead on every time, you have to be pleased with the accuracy. Check once and cut once is the quick and easy motto for intelligent machines. There's not a lot of going back and redoing and we save money that way.”