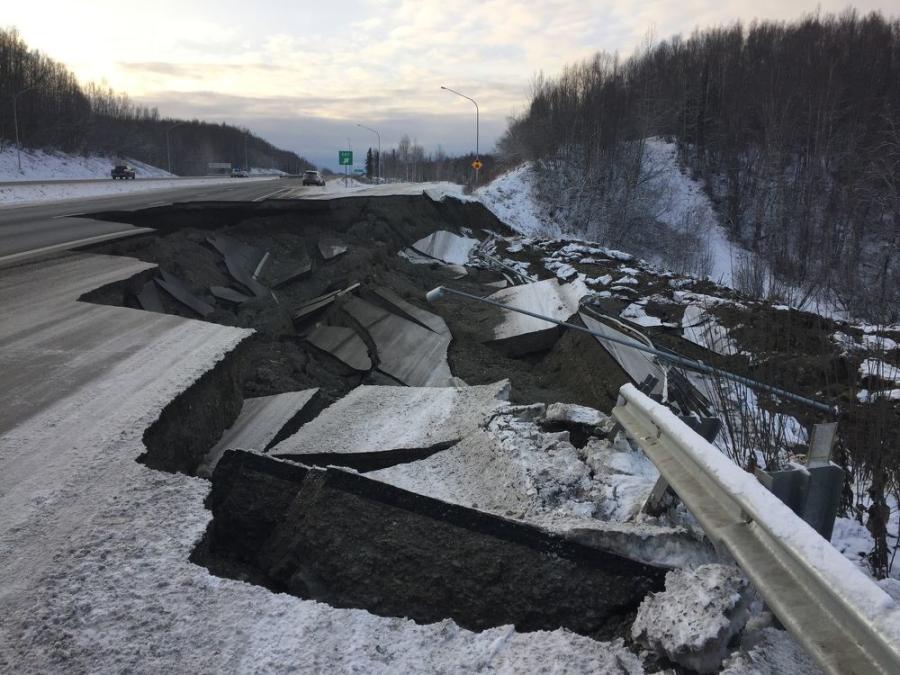 Despite the challenges, not the least of which included at least two sinkholes on a major highway due ongoing aftershocks, contractors finished all the major breaks but one within 72 hours. The last took an extra 12 hours.

The first sign of trouble was the sound. Very loud. Like a low flying 747, recalled Shannon McCarthy, administration operations manager of the Alaska Department of Transportation. Then came the jolt and McCarthy knew this was no low flying plane.

It was the beginning of magnitude 7.0 earthquake that would shake southcentral Alaska for 18 to 35 seconds and trigger aftershocks for weeks after. 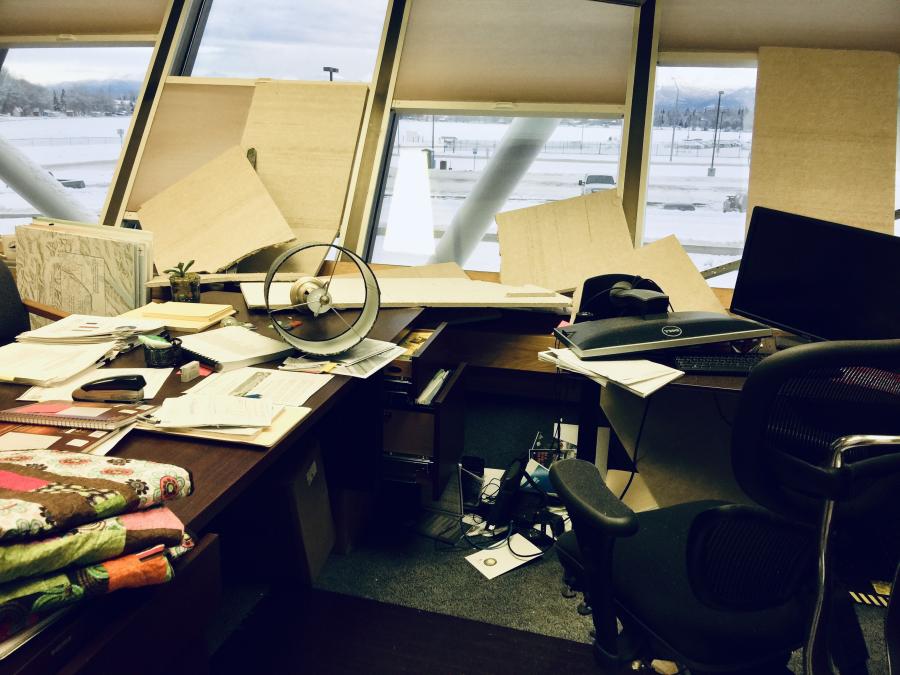 The office of Shannon McCarthy, administration operations manager of the Alaska Department of Transportation, after the Nov. 30 earthquake hit.

On that morning of Nov. 30, McCarthy was on her way to a meeting with a reporter at the DOT Anchorage maintenance facility to discuss the challenges the agency is facing with winter road conditions as the climate warms. She had just stepped from her car when the shaking began. It was 8:29 a.m.

"I noted I was on asphalt and I was concerned because I didn't know what the soil was like underneath," she said. "I moved over to concrete, but that made me closer to the building and I didn't want to be hit by anything falling. I went inside and of course, everyone was under their desks and I said, ‘Wow this is some shaker we're having.'"

McCarthy joined her colleagues under the desk until the shaking stopped, but almost immediately the aftershocks started.

"I knew that we had damage pretty quickly because the reports started coming in," she said. "Then we just sort of went to work."

That work included the repair of eight major breaks in area roadways, many highly trafficked. But the DOT was not caught unprepared, a factor that allowed the state to repair roads in record time. 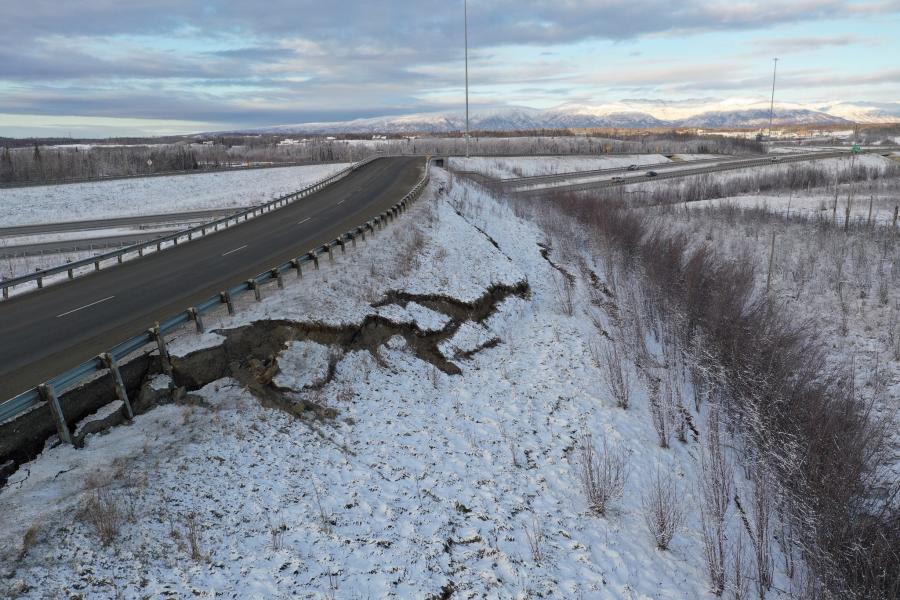 "We had been planning for something like this for some time," McCarthy said. "Four years earlier on the anniversary of the 1964 quake, we did some drills. More recently, we had an incident where an oversized truck hit one of our bridges on our main route on the Glenn Highway between Anchorage and the Mat Su. (Matanuska-Susitna Valley). It shut down traffic pretty significantly. We didn't have a lot of alternatives. It really slowed down the commute. What we did after that is we revisited the tabletop plans.

"As contractors called in, we would assign them with project engineer to a site. We would ask what is your capability? A lot are shut down for the winter. The one thing that is truly amazing is we literally had contractors assigned to the site within two hours of the event."

The challenges were many. The temperature was mild for the area — 30 to 40 degrees — but the ground was frozen, freezing rain falling and daylight in short supply. More importantly, the most critical component of repairs was asphalt, but contractors had shut down their asphalt plants for the winter at least a month or more before. 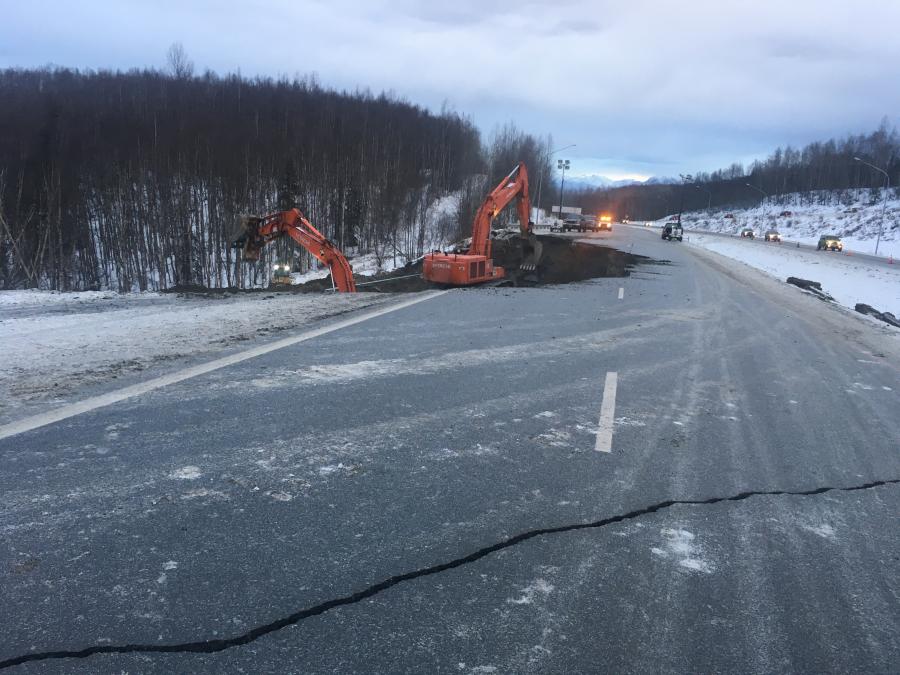 The DOT was not caught unprepared, a factor that allowed the state to repair roads in record time.

"The morning of the quake, we started the conversation. We said, ‘We're going to need asphalt in four or five days; how fast can you get your plant running?' The contractors checked on their own buildings and then ran out and checked on asphalt plants and ran out and turned every one on. It usually takes 10 days to get everything running. It was the ability to get these plants up and running that allowed us to make these repairs in record time."

The DOT also took extra steps to make sure the asphalt — which is hard to compact before it cools and hardens in cold weather — could be compacted sufficiently to hold. They heated the oil extra hot and kept the asphalt trucks stacked up so they could pave continuously. They also used extra-wide/heavy rollers, as well.

Despite the challenges, not the least of which included at least two sinkholes on a major highway due to ongoing aftershocks, contractors finished all the major breaks but one within 72 hours. The last took an extra 12 hours. 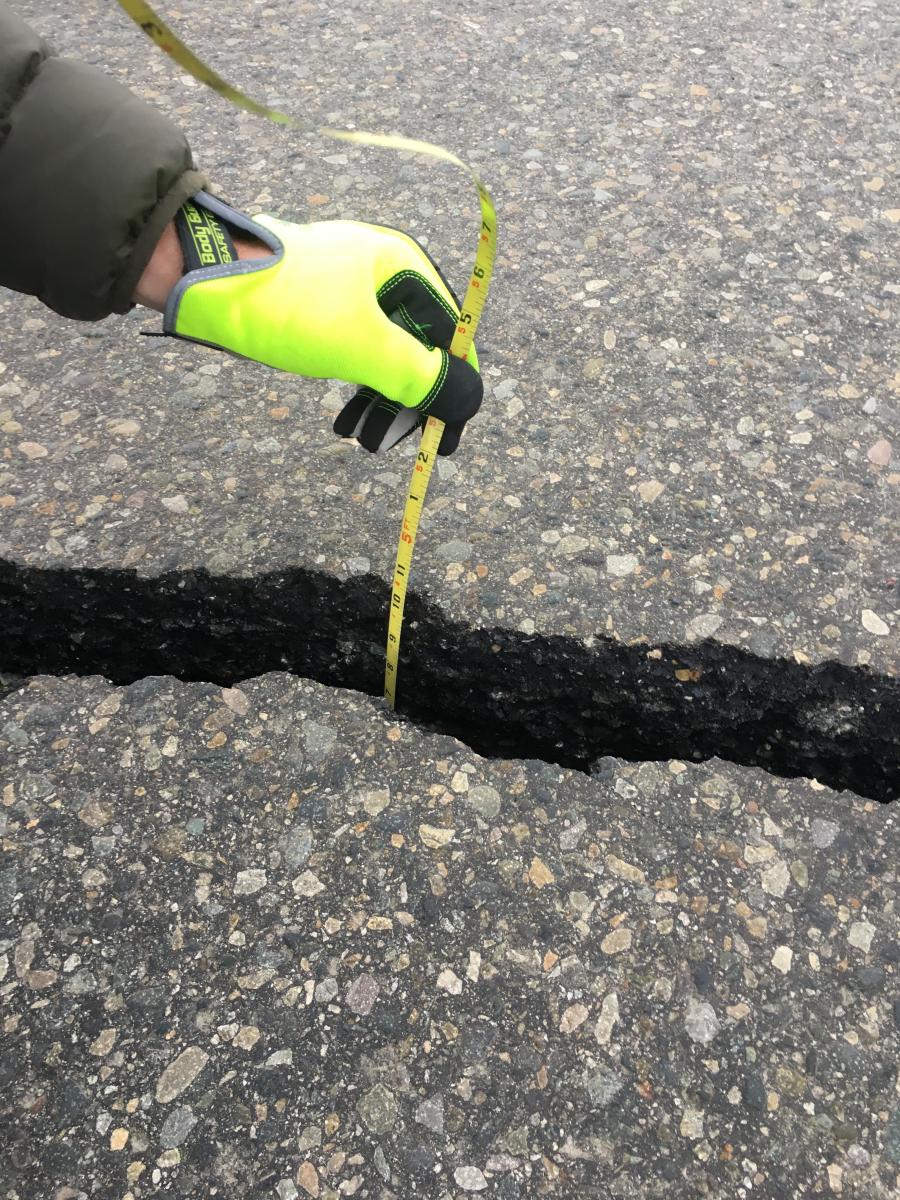 "I knew that we had damage pretty quickly because the reports started coming in," Shannon McCarthy said. "Then we just sort of went to work."

But the work is far from finished, said Sean Baski, ADOT design project manager. Baski put in 85 hours the week following the quake. The repaired roadways seem stable now, likely because the frozen ground is holding things together.

"Come this spring when things start thawing out, that's a huge concern for us," he said. "Our efforts are definitely not done. We're only in the beginning stages. They saw us do all this great work in a very short time to bring us back to normal, but we are not back to normal. We won't know until this summer."

Baski praised the contracting community for their quick response and hard work, and called ADOT maintenance crews the "unsung heroes" of the story.

"I got a call at 2 in the morning from some of our construction crews that couldn't keep their equipment on the road because of ice," Baski said. "They needed maintenance operators to go out there and sand. We had our maintenance crews out there on site within a half-hour to 45 minutes putting down sand. Without that they wouldn't have been able to finish paving.

"Local law enforcement also played a huge role. They were helping to identify sites and make sure things were passable. When they found what they deemed to be unsafe conditions, they would call us to put out traffic control to make sure people could see where the conditions were less than ideal. And then after that, once we had a contractor available, we would send them out to fix it. It was a big team effort." CEG