In 1941 as WWII raged, Alaska was identified as a particularly vulnerable spot and the government knew defenses had to be improved. 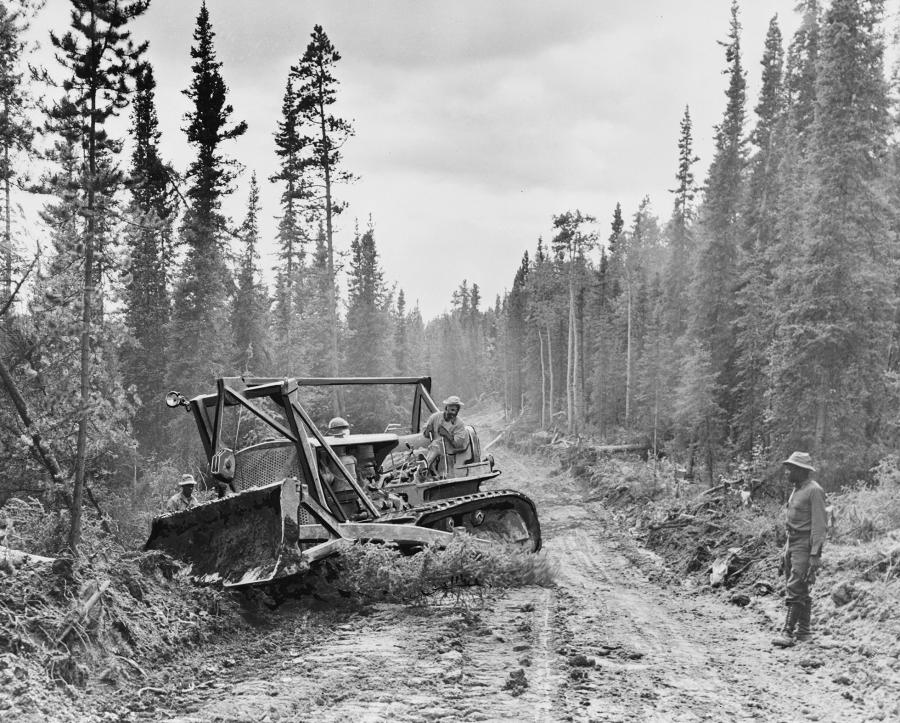 Crews use a Caterpillar tractor with grader to widen the roadway in 1942 during construction of the Alcan. (Library of Congress photo)

This year marks the 75th anniversary of the Alaska Highway, an engineering marvel that some doubted could be done, and one military officer likened to the biggest and hardest construction job since the Panama Canal. Events are planned throughout the year in both Alaska and Canada to celebrate the feat. But the highway is noted for another milestone in history — the beginning of the end of segregation in the United States military.

“This was built primarily by African American regiments, said Casey Woster, architectural historian for Colorado State University's Center for Environment Management of Military Lands. “At that time, the military was segregated. Their efforts are a huge part of why the military was desegregated.”

In 1941 as WWII raged, Alaska was identified as a particularly vulnerable spot and the government knew defenses had to be improved. They looked at several options for building an overland road — including one on the west side of the Rockies and one on the east — the path they ultimately chose.

“That's what we focus on here,” said Woster. “The [United States] lent the Soviet Union 7,926 aircraft to fight the Germans. The planes were stationed in Great Falls, Mont., and would come up through Canada, into Fort Wainwright here in Fairbanks, at which point we would take out everything we didn't want to share with Soviets. They chose this route as a way to connect various Lend Lease airstrips, as well as support troop movements if necessary.”

“More than 10,000 soldiers from the United States Army Corps of Engineers were assigned to the project, of which approximately 3,700 were black Soldiers belonging to three all-black regiments — the 93rd, the 95th and the 97th,” said Fort Wainwright Landscape Historian L. Amber Phillippe.

History records that the conditions were brutal, the men not treated well.

“They worked in some of the most extreme conditions you see on our planet,” Meadow Bailey, public information officer for the Alaska DOT. “The regiments built from Alaska and Canada and worked toward each other. They did a fantastic job.”

And they finished the 1,400-mi., $138 million (the equivalent of $2.1 billion in today's economy) project in what must have seemed record time.

“It's more than 1,000 miles of road they built from May to October,” said Woster. “The first year it was a lot of bushwhacking, clearing a trail, just cut right out of wilderness. A lot of the photographs show trucks and construction equipment just completely bogged down in melted permafrost. There are photos of them stuck halfway up to the doors in mud. It was a herculean effort to get this built.”

One solution to keep vehicles from sinking into the mud was an early road construction technique known as corduroy — still used in remote areas and on service roads today, Woster noted.

“It's still a quick and easy way to make a road passable without bringing up extra supplies. They cut down the trees — some are very small — and pave the road with horizontal laid trees and that prevents vehicles from sinking in the mud. In the boggy areas, you are literally driving on horizontal trees.”

Much of the work was hard physical, manual labor. But they did manage to bring in heavy equipment, as well.

According to Historynet.com, “…by train and plane, they dropped into an area that boasted more caribou and moose than humans, and they arrived with what amounted to an armada of heavy equipment: 174 steam shovels, 374 blade graders, 904 tractors, and more than 5,000 trucks, as well as bulldozers, snowplows, cranes and generators.”

When it officially opened in the fall of 1942, it was dubbed the Alaska Canadian Military Highway. In those early years, the road wasn't paved or even covered with gravel in some places, and it was open only to the military. It opened to tourists in 1948, spawning the hasty construction of garages and road houses, most of which just as quickly disappeared.

“You can still see them,” said Woster. “As road improvements happened, vehicles got faster and the road got smoother, the vehicles would just pass by and people would go out of business.”

Today it is simply the Alaska Highway or to many who've driven it, the Alcan.

The Alaska Highway Heritage website describes the Highway as crossing five summits ranging from 3,198 to 4,199 ft.

“The highway is divided into three distinct sections. In British Columbia, it is known as Highway 97; in the Yukon as Highway 1; and in Alaska as Highway 2. It runs through diverse natural eco-regions, from the Peace River Plains through boreal forests and mountain ranges.”

“Now it's a wonderful road, said Woster. “Back then you had all of these problems. It was not completely paved until about 2008. I remember doing it in the '90s and I always make sure there is an extra gas can in the truck, always a full spare tire. It's pretty nice now.”

Fort Greely and Delta Junction — recognized as the end of the road — recently (June 3) hosted a full day celebration of the 75th anniversary, including a guest appearance by Leonard Larkins, one of the African-American soldiers who helped make the highway happen.

And there are more celebrations to come, including a day commemorating the work of the segregated regiments.

“We had a bill passed in the Alaska Legislature designating Oct. 25 as a day of recognition for the African Americans who built the road,” said Woster. “The big international celebration is going to be June 29 at Soldier's Summit in Canada. It is where the Canadian American gov. officially opened the Alaska Highway.”