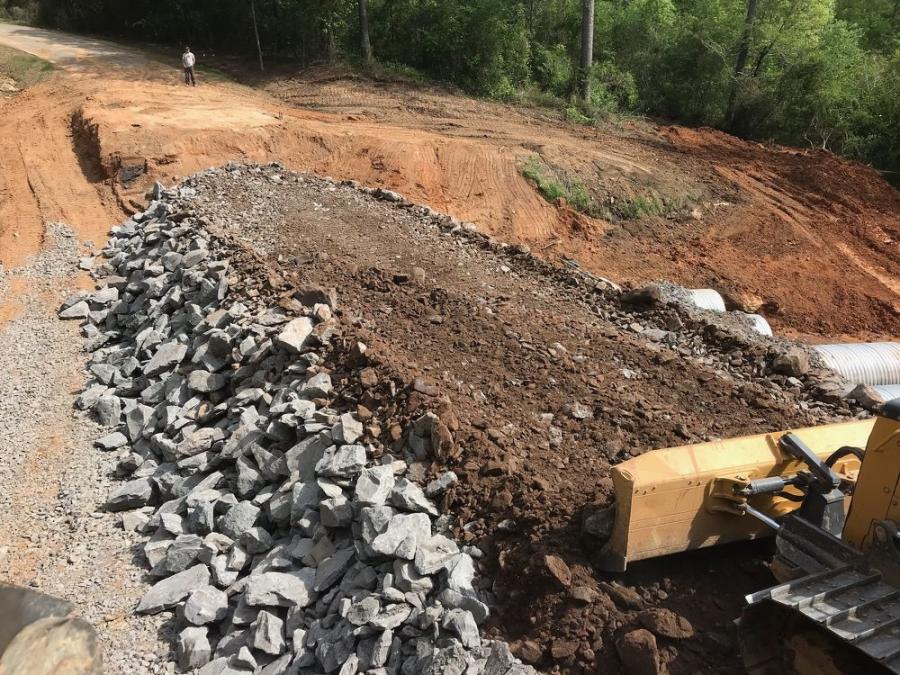 Unlike any other project ALDOT had been tasked with, this one had to be surveyed and laid out as workers were doing it. As a result, there was little room for error.

Due to quick action by the Alabama Department of Transportation, what could have been a major disaster was avoided when two lines of a 96-in. diameter corrugated metal pipe failed.

Torrential rain on Easter Sunday washed out a 100-ft. long and 30-ft. deep section of Mandy Williams Road in District 4 of Walker County, leaving local and state officials scrambling to help residents who lived in the area. 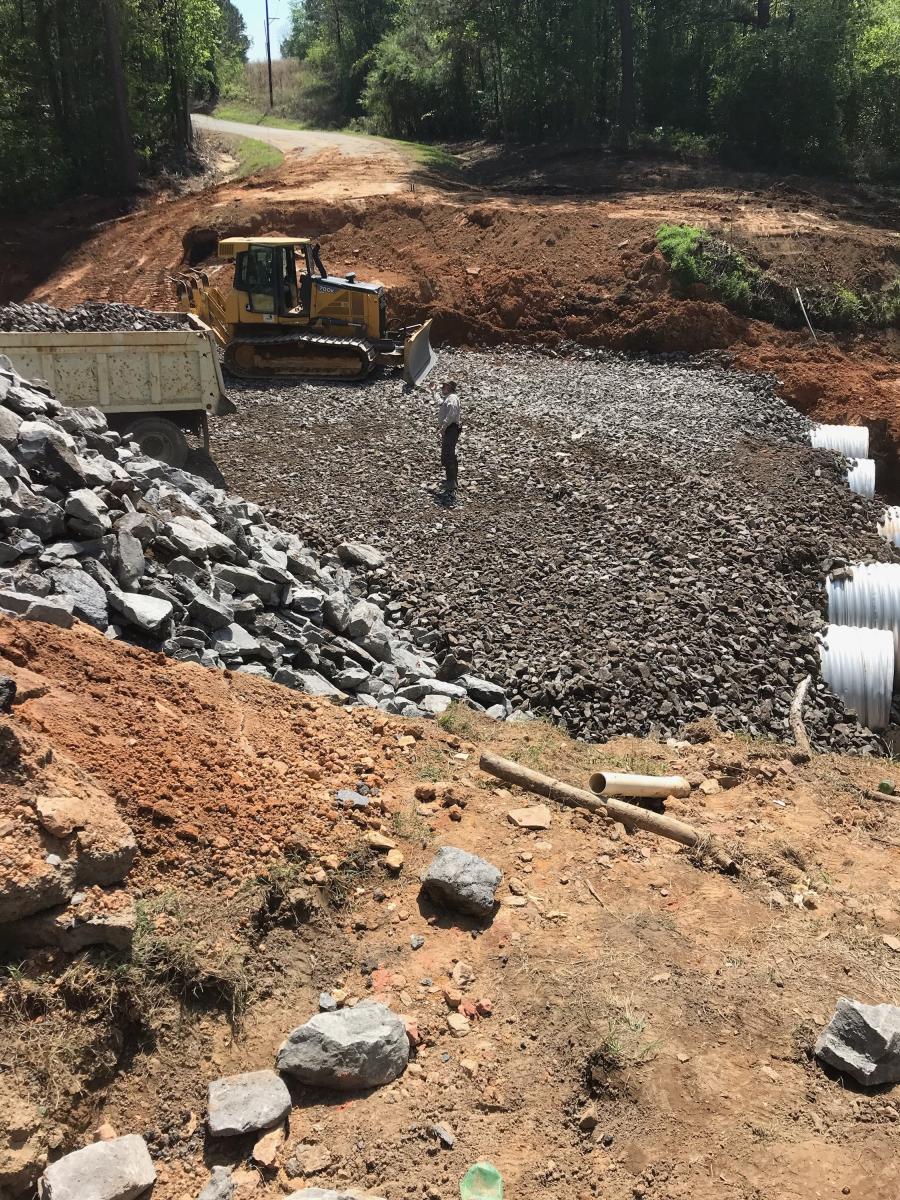 A helicopter from the Alabama Law Enforcement Agency (ALEA) was flown to the area to conduct a door-to-door check on residents. One of the stranded residents was an 88-year-old cancer patient who needed medical attention.

"We wanted to be sure that everyone was fine and there wasn't another way to get in touch with everyone," Anderholt said.

Rowe was surprised by the size of the washed-out area.

"I drove out to take a look at it. It's impressive," she said. "I stood on one side looking over at members of the families stranded on the other side. The water line went with the road during the washout and they were connecting a temporary water line while I was there. By they, I mean the water board being helped by people in the community and notably, one gentleman's Bobcat."

According to Rowe, ALDOT approved a purchasing request for three, 96-in. pipes and confirmed the next day that the pipes were already en route to the location.

"I appreciate ALDOT's willingness to help us out. They were concerned and considerate of our circumstances. I'm grateful for the relationship our community has with this state agency. The first thing they asked for was an assessment from our county engineer, Mike Short. They know him and have confidence in his work. Those relationships are beneficial for us in times like these. This is the fastest commitment I've ever secured from ALDOT."

The project, completed by 20 ALDOT employees from the Hamilton District crew in three days, included:

All Hands On Deck

Unlike any other project ALDOT had been tasked with, this one had to be surveyed and laid out as workers were doing it. As a result, there was little room for error.

The permit coordinator coordinated the trucks. Upon arrival with the materials, they were directed to the stockpile or dump site. She also assisted in the logistics of delivering the 400-ft. of pipe. 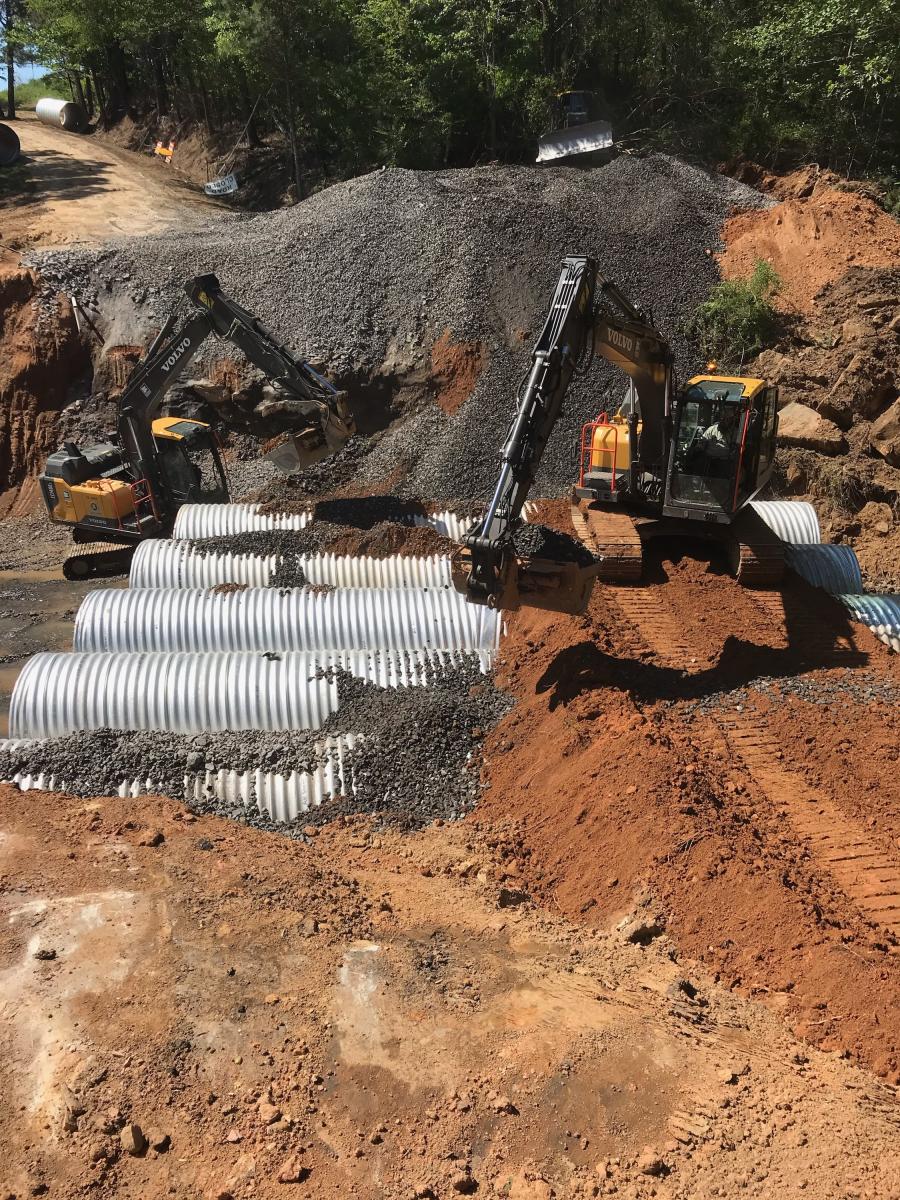 The road map coordinator assisted in the pipe logistics with the permit coordinator and was responsible for shuttling the fuel trucks throughout the day. A fueling site was mobilized on the job for the equipment and dump trucks to maximize time.

Most of the unclassified excavation had been moved in three days and cleaning out the flowline of the running creek had begun. Workers encountered a glitch with the flowline due to there not being a solid bottom to the creek. Because pipe can't be laid on unsuitable material, the plan had to be adjusted and a rock floor for the foundation constructed. As a result, work was set back almost half a day due to having to excavate muck then backfill with riprap to bridge over the area. The operators persevered and by late that evening, the enormous task of laying the desired 400 linear ft. of 72-in. pipe began. Each pipe had to be individually transported and placed into the 100 by 80 by 30-ft. deep void before being banded by hand. By late afternoon, more than half of the pipe had been placed and backfilled.

Officials forecasted that the first car could cross the area the next day. They still had to place 100 ft. of the 72-in. pipe and fill the immense void to the other side. To expedite the stone fill, the crew had been stockpiling near the site since for two days. That afternoon, the district was able to place 2,500 tons of rock for the crossing. By end of day, the entire district staff had been responsible for getting the first vehicle across. CEG