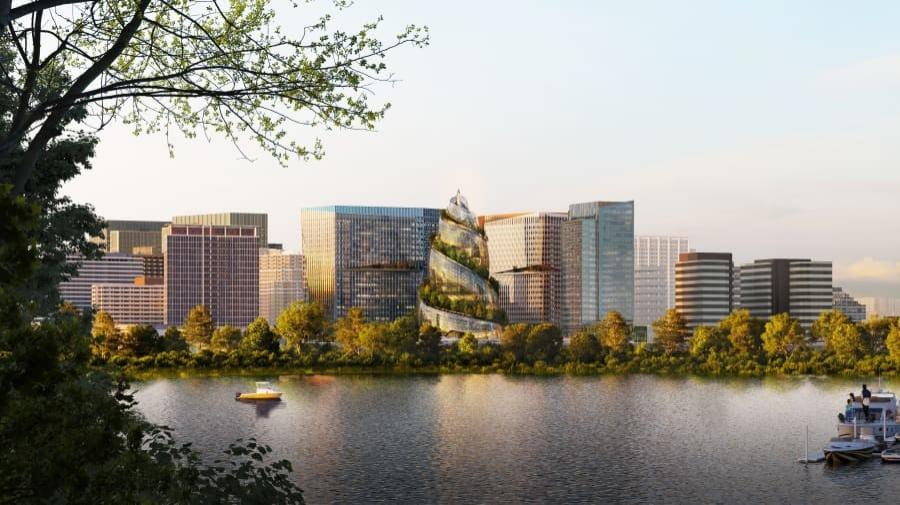 Amazon unveiled new renderings of its Arlington, Va., headquarters, which include The Helix, a uniquely designed 350-ft.-tall tower. (NBBJ rendering)

Amazon on Feb. 2 unveiled new renderings of its second headquarters (HQ2) in northern Virginia, which include plans for a 350-ft.-tall tower dubbed "The Helix."

The tower is part of Amazon's proposed development plans for the second phase of HQ2, which the company hopes to complete in 2025. It will be built in Arlington, Va., across the Potomac River from Washington, D.C.

The standout feature of the Helix design proposal is described by Amazon as a "spiraling vertical forest" that features outdoor walkways with trees and plants that twist up to the top of the building.

The shape of the building is meant to resemble a double helix and touches on "humanity's innate connection to nature," according to architecture firm NBBJ, which is designing the structure. NBBJ works across the globe and maintains an office in Washington.

The Helix will serve as an alternative workspace for Amazon employees, but it will also be open to the public on some weekends each month, like the "Spheres," the nature-inspired centerpiece of Amazon's Seattle headquarters.

Amazon said the designs make up the proposed development plans for the second phase of new construction on HQ2. If the plans receive approval from Arlington County, the company hopes to begin construction on the Helix and other office buildings on the site in 2022. Construction is expected to be complete in 2025.

The Helix, combined with three other office buildings at the site, called PenPlace, would create roughly 2.8 million sq. ft. of office space.

Aside from office space, Amazon has set aside more than 2.5 acres of open spaces that are accessible to the public. There's an amphitheater designed for outdoor concerts, farmers' markets and other activities, as well as public green space. The site also will include retail pavilions and restaurants, in addition to other community spaces, such as a child-care center, a dog run and a food truck area.

The company said the site prioritizes "walkways, landscaping and retail over motor vehicles." It plans to build protected bike lanes in the streets near the office buildings.

The multinational technology giant selected Arlington as the site of HQ2, in addition to the Long Island City neighborhood of Queens, N.Y., as part of its well-publicized search for a second headquarters. But Amazon announced in 2019 that it would halt plans to build its new headquarters in New York after it faced pushback from local activists and City Council leaders. 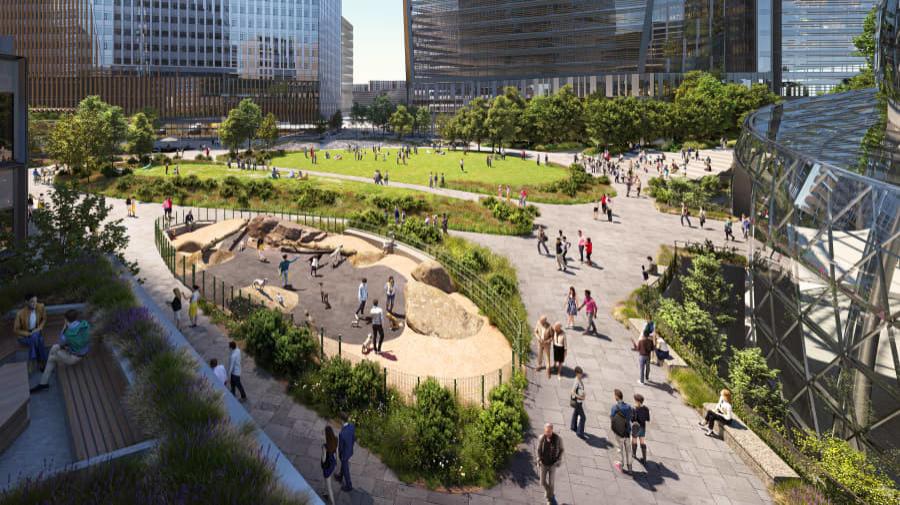