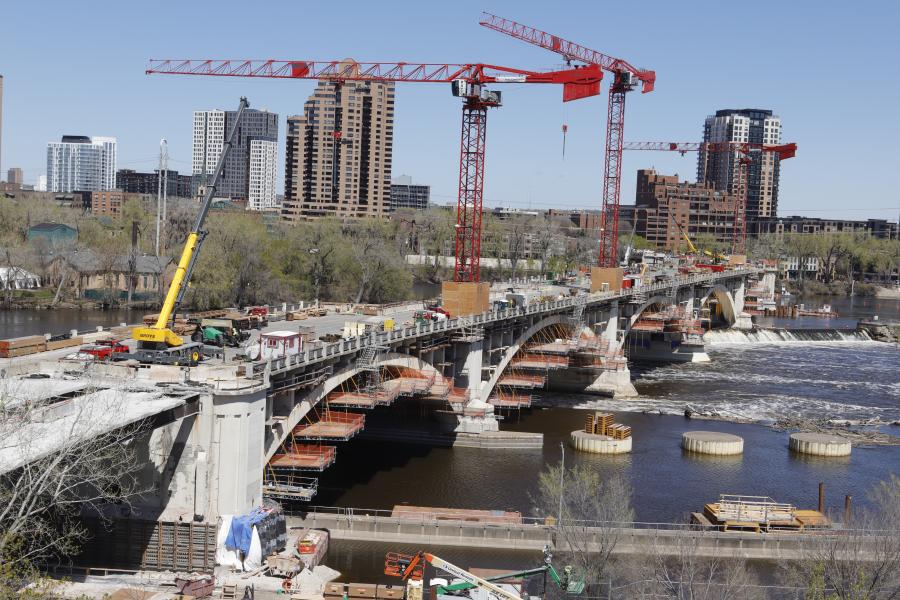 The Third Avenue bridge sits directly in between St. Anthony Falls to the right of this photo and the Horseshoe Falls on the other side of the bridge.

It has been a workhorse of a bridge standing the test of time over the last five generations as motor vehicle traffic continued to evolve and drastically increase in numbers. Without doubt, this is due to the engineers who designed it and the contractor who built it at a time when, just a few years earlier, the horse and carriage could still be seen on city streets.

The historic Third Avenue bridge located in the heart of the city of Minneapolis is undergoing a major rehabilitation to make some much-needed repairs and add another 50 years to its life span. Completed in 1918 after four years of construction, it is located just upstream from the historic St. Anthony Falls District of the city. This bridge carries HWY 65, known locally as Third Avenue, from downtown Minneapolis over the Mississippi River to the city's Northeast neighborhood. 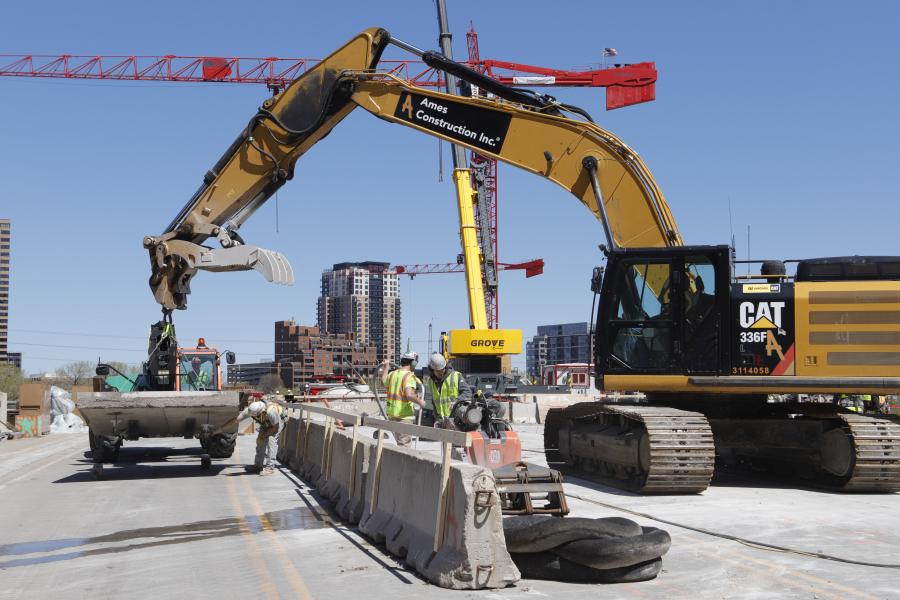 The bridge is historically significant because it is a landmark structure that is part of the St. Anthony Falls Historic District, which was the center of the city's early flour milling days. It reflects the creative engineering of Josef Melan, an Austrian civil engineer known as one of the pioneers of reinforced concrete bridge engineering at that time.

The Minnesota Department of Transportation (MnDOT) awarded the $129 million contract to Ames Construction of Burnsville, Minn. The project is a collaboration between MnDOT, Ames and the Finley Engineering Group of Tallahassee, Fla.

Finley is responsible for managing the load distribution requirements on the bridge deck during the on-going and changing construction dynamics as the project moves forward.

Long before aesthetics played a key role in future transportation design, government leaders in the early 20th century wanted this bridge to visually stand out, according to the MnDOT project web site.

The bridge deck is supported by spandrel columns through the first and fifth spans and spandrel walls through the sixth and seventh spans. Engineers placed barrel aches at the north end of the bridge because the spans are shorter, which required a tighter radius, explained Tim Nelson, MnDOT project manager.

Piers one, six and eight are framed by circular overlooks on each side of the bridge.

When the bridge reopens in November 2022, it will be ready for another 50 years of service and feature refurbished decorative railings and lighting; a 13-ft.-6-in. shared use bicycle and pedestrian path; and four, 10-ft.-10-in. traffic lanes.

Ames will mobilize a variety of heavy equipment and cranes — including Manitowoc and Grove cranes — and Cat excavators to bring this bridge rehabilitation to completion.

Though repairs have been done on this bridge over the years, the 100-year-old structure was at a point where deteriorating elements of the superstructure and scaling around the piers at the water line required repair to avoid placing future weight restrictions on its road deck.

Limited in the scope of the work that could be done on this bridge because of its historic status and the fact that those early engineers designed a bridge so sound, MnDOT determined that a complete make-over of the bridge was the best route to go, Nelson said.

Along with the graceful look of the arches, at 2,223 ft., it also is visually notable because of its reverse "S" curve forming a graceful alignment imposed by challenging foundation conditions because of its location just upstream from St. Anthony Falls.

According to the MnDOT web site, Frederick Cappelen, educated in Sweden and Germany, was the chief city engineer at the time. 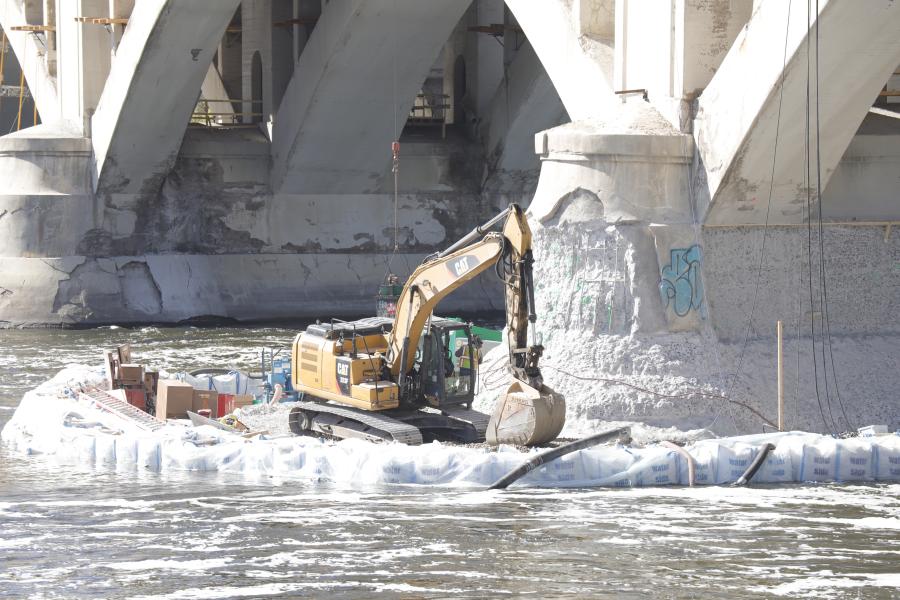 Cappelen understood that the riverbed geology at the falls contained dangerous breaks in the limestone. To avoid these breaks, which could cause catastrophic loss of the falls and future bridge, Cappelen designed the foundations around these breaks to create the reverse, "S" curve alignment.

Over the next two years, crews will turn this bridge inside out to methodically and painstakingly demo and rebuild every element from the Melan arches up to the road deck. Details include building cofferdams for access below the water line to repair the piers; removing and rebuilding the spandrel columns and walls; and removing and rebuilding the bridge deck and decorative railings. There will be some concrete repair on the surfaces of the arches throughout the length of the bridge.

This is a project that faces a tight deadline and very challenging site conditions severely limiting equipment access and hampered by no free space on the river banks for lay down areas.

The bridge is tightly hemmed in between the St. Anthony Falls Lock and Dam, which was decommissioned in 2015 by the Army Corps of Engineers, and a structure referred to as the Horseshoe Dam used to generate power.

This led to the biggest challenge of this project. Because of the site conditions imposed by the set of dams on either side of the bridge, Ames Construction relied on every piece of equipment and material to be trucked to the site, including the barges and small tug boat.

"Mobilizing large pieces of heavy equipment on large barges below the bridge was impossible at this site because of the tight restrictions caused by the two sets of falls," said John Schmitz, Ames Construction project manager. "We could not rely on our river equipment. On many projects like this, you can access the whole bridge from down below. Here, we can't do that through large sections of the bridge. Essentially, we need to build in a ‘top down' approach and not rely on our river equipment to provide assistance for anything other than the cofferdam and pier jacket work."

This led to a several-year effort between MnDOT and Ames Construction to come up with a complex construction sequencing plan as the three-year project moves forward.

To put it as simply as possible, "we have a couple of sequences. Generally, each span is taken individually either in a full width and build it back to full width or a partial width where we do the upstream or western third roughly. We'll take it off and rebuild it back. In that case, we put a temporary bridge over that span so we can access and cross it while we do the other side of the span," Schmitz said.

This project is under a challenging schedule, which also drives the construction and loading sequences, Schmitz said.

"We have roughly 22 months to tear it apart and build it back. Access becomes such a huge factor on a short schedule because we'll be working in multiple areas. It's a combination of full width or partial removals and rebuilds while maintaining access to get removals off the bridge, pour new concrete, get concrete in and out and also maintain a schedule, be productive and continuing at a rate to finish on time," Schmitz said.

This is where Finley Engineering plays a key role in this project.

Finley relies on Bridge Integration Modeling (BrIM) approach to assist with the complex sequencing and scheduling of this bridge project, Nelson said.

According to the Finley web site, the BrIM allows construction teams to "proceed with the integration of the complex construction sequencing, scheduling and planning for upcoming construction activities."

"Finley monitored and analyzed the sequencing plan for construction loading," said Schmitz. "Their task is largely to analyze the bridge to ensure what we do from a construction standpoint is safe so that the demo and rebuild doesn't cause damage or exceed the capacity of the arches. 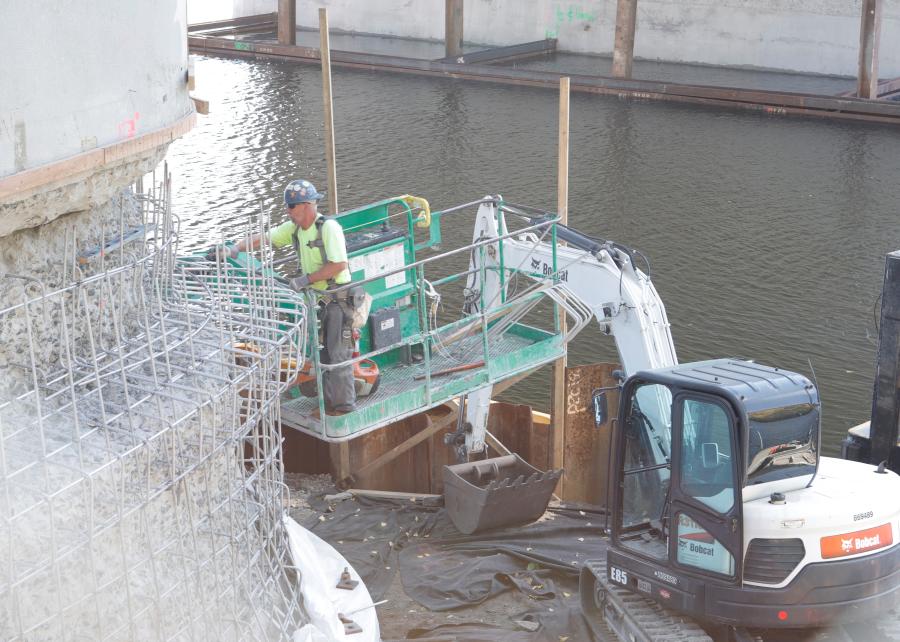 "To station these cranes on the bridge, we designed a custom tower base to fit inside the pier and poured it with concrete," said Schmitz. "So, the cranes are supported by the bridge itself."

Three Manitowoc 3450 tower cranes are out on the bridge on piers two, three and five, with a fourth crane scheduled to be mounted later this summer.

Preparatory work below the bridge deck began in May 2020 out of site of the drivers and pedestrians crossing above.

Schmitz ticked off a list of preparatory activities ahead of the demo and rebuild during this time including the installation of work platforms, placing protection over the utilities hanging under the bridge, cofferdam construction and pier jacket repair and setting the bases for the tower cranes.

At the first of this year, Ames crews shifted into high gear. After closing the bridge to traffic, crews began the demolition and rebuild.

The bridge is covered with a series of ascending work platforms up to the bridge deck at each span. Sections of bridge deck through the length of the bridge have been removed while pier jacket work continues below.

Through the final two years of the project, bridge crews will continue to dismantle the bridge deck and spandrel walls in a very precise sequencing schedule and will be working through the winter months to finish this project on schedule.

While the project sequencing and monitoring bridge loading are key challenges on this project, safety is the highest priority for all parties.

"Working at heights with a lot of parts and pieces flying around between demos and rebuilds, continually changing site conditions, tie off points and water safety are critical," Schmitz said.

"We need to take precaution to make sure employees are not exposed to silica and that they take every precaution. It's an engineered vacuum system," Schmitz said.

To date, both Schmitz and Nelson are happy with the progress made and are confident this demo and rebuild of the Third Avenue bridge will be done by November 2022.