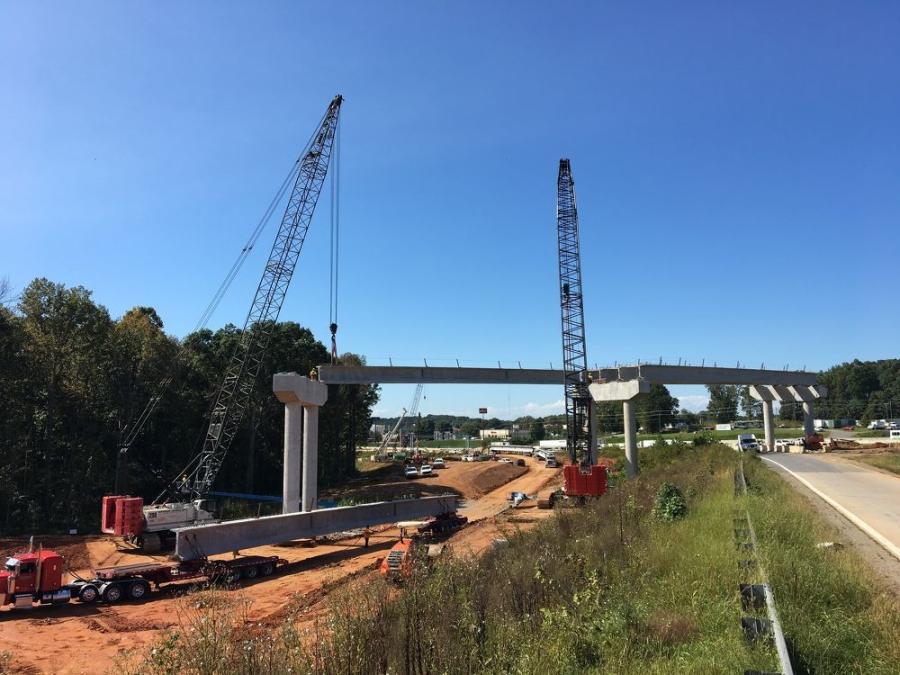 More supports are being constructed for the flyover portion of the partial turbine interchange supports for I-40 WB to I-77 SB. (Lane Construction photo)

It is now been almost nine years since contractors first began to transform the interchange at I-40 and I-77 in Statesville, N.C., 40 mi. north of Charlotte.

With only an expected year-and-a-half left before the two-phased freeway project is finished, crews from two different construction companies have made quite a few upgrades to each interstate as well as several streets and roads feeding to them and the interchange.

When that $89 million first phase of the I-40/I-77 Interchange was completed in 2017, local drivers and thru-travelers were given a short respite from road building until May 2019 when Connecticut-based Lane Construction, a national heavy construction contractor, started its work to finish the job by June 2022.

Time for an Interchange Upgrade

When the original intersection of I-40 and I-77 was built in the late 1960s, traffic projections through the junction were projected to be about 5,000 cars and trucks per day in 1970. Since that time, though, Statesville itself has many more residents, but the area south of town around Lake Norman and the suburbs north of Charlotte, as well as the Queen City itself, has seen a tremendous growth spurt. 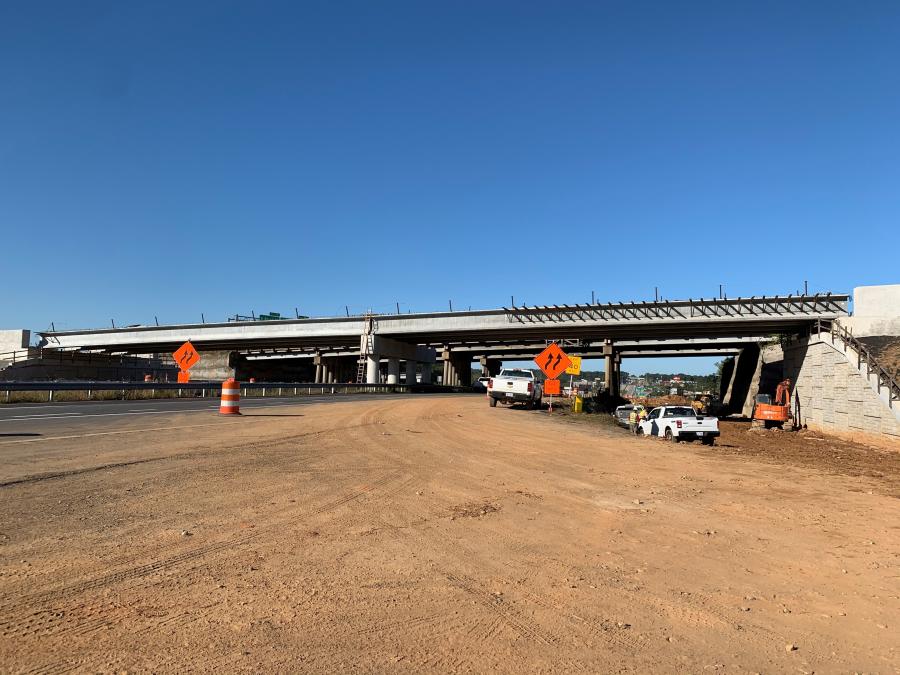 Another incentive for the state to improve the interchange became apparent in the mid-2000s when a series of accidents sparked closer scrutiny of the junction.

"Safety is always one of our main concerns," said Marcus Thompson, communications officer of the North Carolina Department of Transportation (NCDOT). "Our hope is that these improvements to the interchange will enhance safety and make travel easier for everyone in this area."

So, with all that traffic, the subsequent 50-year wear and tear on the interchange and concerns over vehicle safety concerns, NCDOT engineers made clear to its prime contractors that significant improvements had to be made at the junction.

"The existing I-40 and I-77 intersection has simply outlived its original purpose," explained Casey Hurley, Lane Construction's project manager in Statesville. "The work we are doing now will improve congestion and safety for the traveling public. The current average daily traffic is 70,000 vehicles and is expected to increase to 110,000 by 2035."

Lane was selected by the NCDOT for the design-build contract to widen both the interstate highways for a total of 7.6 mi. Under construction to improve the system connection is a partial turbine interchange at the site, which utilizes a 2,289-ft.-long flyover ramp that allows westbound I-40 motorists to easily exit onto I-77 southbound toward Charlotte. 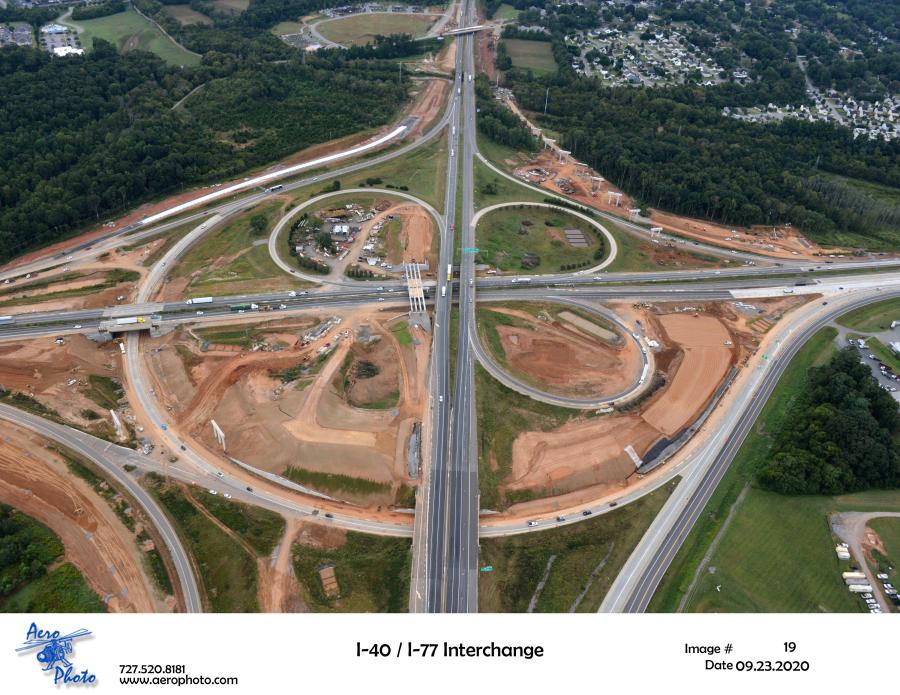 A partial turbine design makes interchanges such as this one easier to maneuver for motorists and doesn't disrupt traffic. To convey cars and trucks safely through the crossing, Lane also has been installing high-capacity, high-speed ramps.

"Before the first phase of the project, the I-40/I-77 interchange consisted of a clover-leaf design," Hurley said. "The contractor on that part of the project removed and upgraded the existing northeast quadrant with a partial-turbine, which carried I-77 northbound traffic to I-40 westbound. Under our contract, Lane will further upgrade the partial-turbine interchange, eliminating both the existing north-west and south-east quadrants. In addition, the existing south-west portion will be re-aligned."

He said that utilizing the modified turbine interchange design at I-40 and I-77 provides several benefits, including a reduction in wetland impacts, eliminating the need for third-level structures, and the use of concrete girder bridges can be optimized. Further, the design accelerates the schedule, decreases short-term construction and long-term maintenance costs, and minimizes impacts to traffic during construction.

Lane Construction's Tasks Are Many

Along north-south I-77, the contractor is:

Lane also has crews working on east-west I-40 to:

These facts, too, bear out the amount of work Lane has been performing for almost three years:

He also pointed out that the open graded friction course (OGFC) on the I-77 pavement structure will improve surface drainage by deterring the hydroplaning of cars and trucks. The design-build team considered alternative designs, materials and construction methodology to reduce long-term maintenance costs, he said. 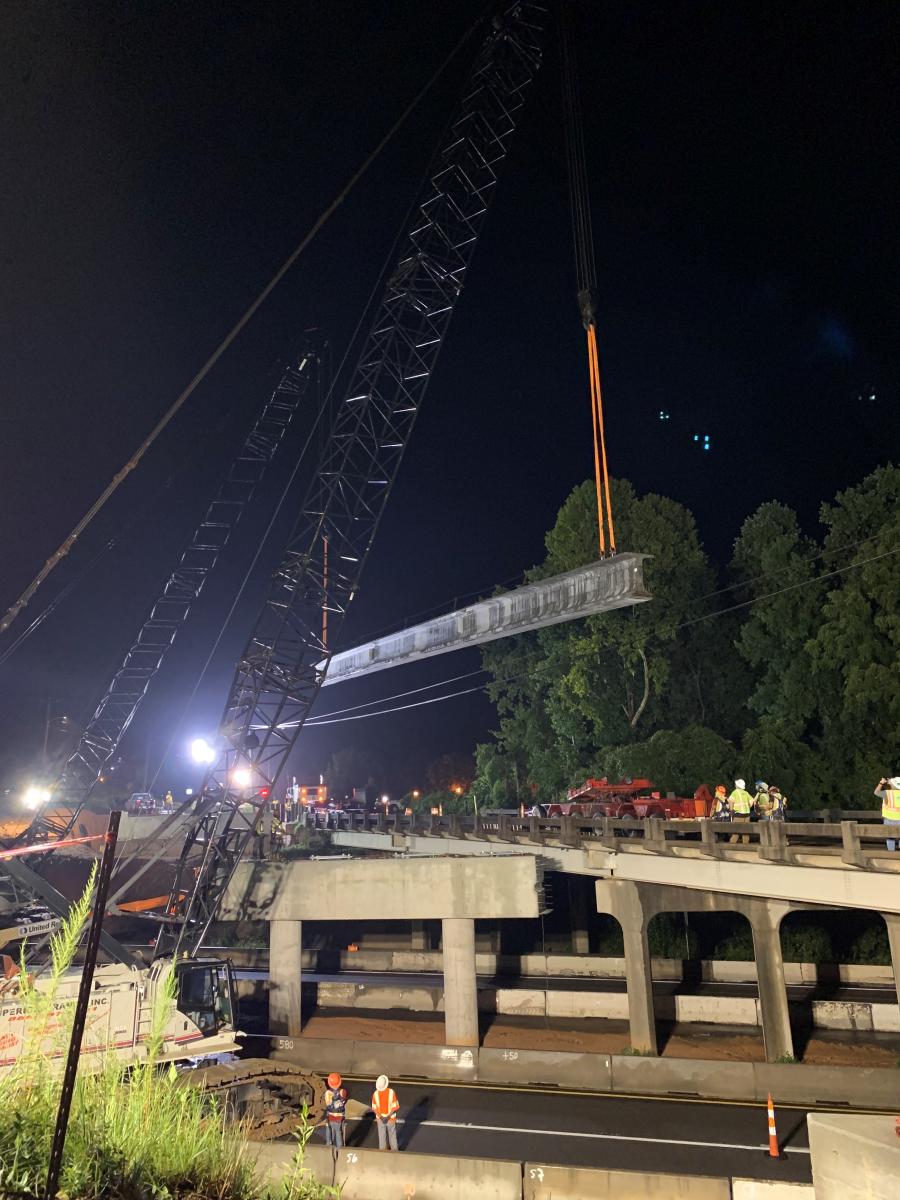 While few other things were able to continue as planned last year, the Statesville project managed to move forward, according to Matthew Evans, the resident engineer of NCDOT.

"The pandemic hasn't really affected our ability to stay on schedule," Evans explained, although he did add that an over-abundance of rainfall in 2020 did present a few challenges.

On average, the city of Statesville receives around 45 in. of rain per year, but the past 12 months saw more than 60 in. fall, including multiple flooding events.

In 2020, even with the pandemic and often wet conditions, Lane managed to put a considerable amount of the interchange project together. That work included project-wide clearing and grubbing; installing temporary median widening to allow outside reconstruction; utility relocations; and wet utility construction.

The large embankments within the interchange, Hurley explained, were atop damp, marginal soils, which required the use of high-strength geotextile stabilization efforts.

Since the fall, Lane's crews also have built noise walls; bridges; installed both asphalt paving, cement treated base; and Portland Cement Concrete paving, as well as continued its efforts to construct the I-40 eastbound collector distributor lanes and the westbound I-40 lanes.

As the new year began, Evans said the various components of the interchange upgrades put the project at 37 percent completion overall.

Lane Construction has not, of course, been building this new freeway interchange by itself. Rather, it has gathered some of the finest building specialists from across the South to apply their skills to the project.

Among the key subcontractors are:

Hurley projects 2021 as the busiest time at the Statesville work site. At its peak, he expects Lane to have 25 to 30 crews at work, with another 23 to 28 from among the subcontractors.

When asked about the equipment employed on the I-40/I-77 enterprise, Hurley said that the machines used were a combination of owned and rental pieces. Among the area companies that leased heavy equipment to Lane and its subs were Rockingham-based Superior Cranes; Carolina Cat in Charlotte; Sunbelt Rentals, with locations in Mooresville and Charlotte; United Rentals, with a Mooresville office; James River, which maintains construction equipment showrooms in Statesville and Charlotte; and Ultimate Equipment Rentals of Mooresville.

The number and range of equipment on site in Statesville is impressive, most of which are in Lane's possession.

And to think that after NCDOT experts had identified the need for the massive I-40/I-77 interchange's upgrade prior to building Phase 1, the effort to bring Phase 2 on line was almost cancelled in 2014 after it fell below the threshold in the state's new prioritization system.

Luckily for motorists, however, the road/bridge project was finally recognized as one that would fulfill a critical need, leading the state to allow work to resume on the important enterprise in 2019. CEG