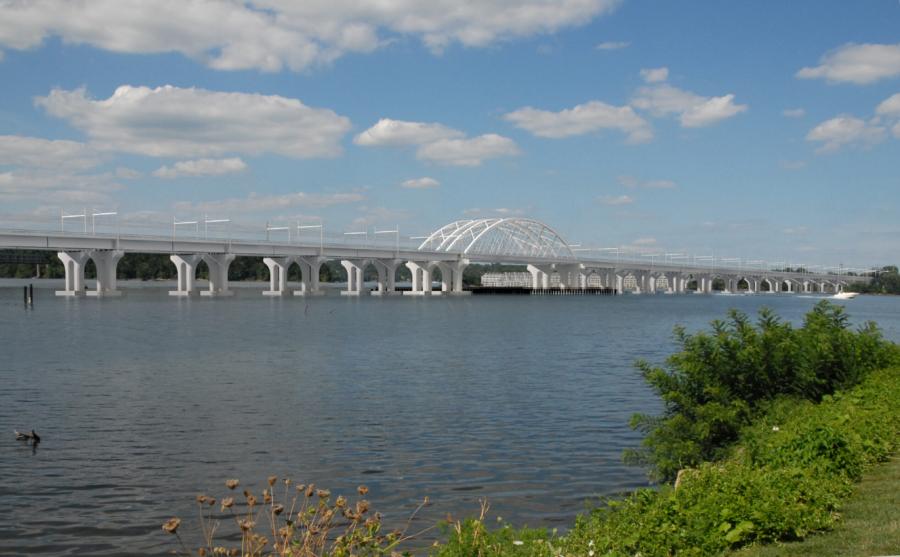 The rail service is looking to build two new bridges to replace the current structure; and overhead power, signal, safety, and security systems at the site will be modernized to improve railroad efficiency on Amtrak’s busy Northeast Corridor. (Rendering courtesy of Amtrak)

Amtrak announced Nov. 18 that it plans to move forward with a major infrastructure project to replace the 116-year-old Susquehanna River Rail Bridge in northeast Maryland.

The rail service is looking to build two new bridges to replace the current structure; and overhead power, signal, safety, and security systems at the site will be modernized to improve railroad efficiency on Amtrak's busy Northeast Corridor.

The total construction cost to replace the Susquehanna River Rail Bridge is estimated to be at least $1.5 billion, the company said in a news release.

The current 4,153-ft.-long bridge is a Howe deck truss structure that carries two tracks of Amtrak's rail line across the waterway between Havre de Grace and Perryville, Md.

"The bridge was built by the Pennsylvania Railroad at the turn of the 20th century and while it was well-constructed and remains safe, it is a significant bottleneck on the Northeast Corridor," noted Amtrak Executive Vice President, Capital Delivery Laura Mason. "Once complete, both new bridges will reduce trip time and improve reliability for passenger and freight trains that rely on this critical connection."

As the longest moveable bridge on the Northeast Corridor, the Susquehanna River Rail Bridge is used by Amtrak, Maryland Area Regional Commuter (MARC) rail, and Norfolk Southern to support more than 110 passenger and freight trains daily.

Crossing the span requires trains to slow to a speed of 90 mph, resulting in capacity and reliability constraints. To resolve this, a pair of newly constructed two-track fixed bridges will replace the existing two-track movable bridge, along with 5 mi. of additional track realignment and construction.

"The Federal Railroad Administration [FRA] is proud of the federal investments being made in the Susquehanna River Rail Bridge Project," said FRA Administrator Amit Bose. "We are eager to see those investments move Amtrak riders, commuters, and freight faster and more efficiently. With the Bipartisan Infrastructure Law, we have the opportunity to update and replace more aging rail structures like [this bridge], and we look forward to working with states and entities to deliver the rail projects people across the country need and deserve."

In the coming months, Amtrak plans to issue several key solicitations, including, but not limited to:

Amtrak, FRA and the Maryland Department of Transportation Maryland Transit Administration (MDOT MTA) plan to award both contracts in 2023.

As a funding partner for the project, MDOT MTA has recently committed $3 million toward a design grant. Amtrak and the state agency are in discussions about jointly pursuing more grant funding for the cost of construction under the Federal State Partnership for Intercity Passenger program.

"We are pleased to invest $3 million to partner with Amtrak to complete final design on the Susquehanna Bridge," said MDOT MTA Administrator Holly Arnold. "The [bridge] provides a critical link for service to the north and this project will provide improvements to MARC train capacity, trip time and safety."

"This project is critical to ensure the safety of Maryland commuters and the reliability of our supply chains up and down the East Coast," he explained. "I was proud to join members of the Maryland Congressional delegation this summer to announce $20 million for the completion of the design work for this project and I will keep working to deliver federal funding for the needed modernization of our state's infrastructure."

United State House Rep. Andy Harris, from Maryland's 1st District, added, "Given that the Susquehanna bridge was built eight years before World War I, replacing this heavily used and older bridge will improve the safety of all travelers, including maritime traffic below it."

Amtrak noted in its announcement about the bridge replacement that it is inviting firms interested in the program to attend an Industry Day in December to learn more about the project. Contractors should monitor Amtrak's Procurement Portal online for further information about Industry Day. The portal will offer additional solicitation information and submittal requirements. Attendance at Industry Day is not mandatory to submit a proposal, Amtrak said, but is highly encouraged. The portal can be accessed at procurement.amtrak.com

The Susquehanna River Rail Bridge was named on the recently released Northeast Corridor Project Inventory list issued by FRA. The project is one of several major infrastructure projects that Amtrak's newest department, Capital Delivery, is advancing. Earlier this year, procurement launches were announced for the replacement of the B&P Tunnel in Maryland and the Connecticut River Bridge in New England. Amtrak will continue revealing similar procurement opportunities in the coming months.