An Inside Look at the Braves' New Stadium

For now, cranes and other construction equipment and materials dominate what will become the playing field. 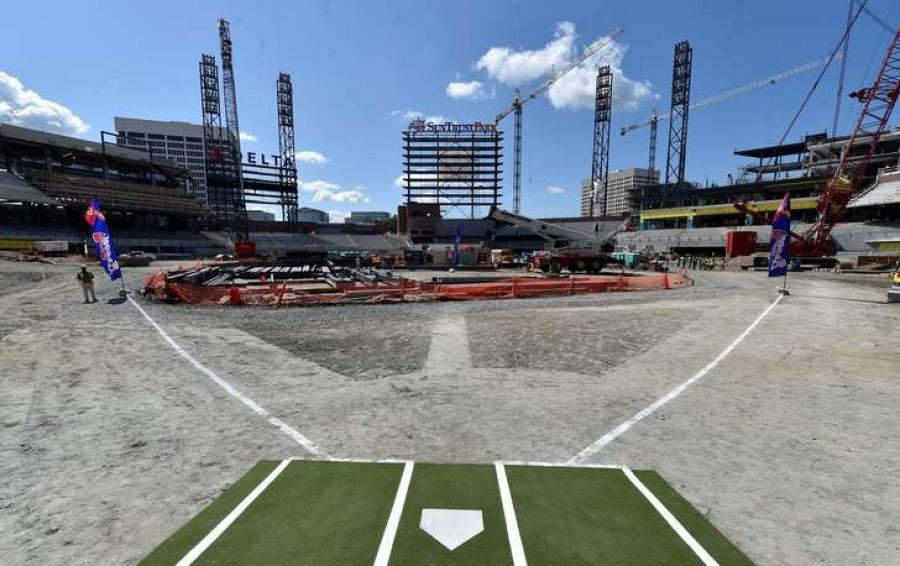 Image courtesy of the Atlanta Journal Constitution. As 75 media members toured the stadium, more than 1,000 construction workers were on the job, marking another day's progress toward the scheduled April 2017 opening of the ballpark and adjacent mixed-use development.

The Atlanta Journal Constitution is reporting that eleven months before the first game at SunTrust Park — and five days before the start of 2017 season-ticket sales to the general public — the Atlanta Braves provided the first detailed look inside their new Cobb County stadium Thursday.

Among key features noticed: the steel structure for a canopy that a stadium architect said will provide shade for 60 percent of fans in the stands, the cantilever construction that will help push many seats in the upper and middle bowls closer to the action than at Turner Field and the concrete surface for a high-tech interactive space above the right-field corner.

As 75 media members toured the stadium, more than 1,000 construction workers were on the job, marking another day's progress toward the scheduled April 2017 opening of the ballpark and adjacent mixed-use development.

“We're right where we need to be,” said Mike Plant, the Braves' president of development. “On time and on budget.”

For now, cranes and other construction equipment and materials dominate what will become the playing field. Only four of the 41,500 seats have been installed, those for illustrative purposes at this point.

But the concrete stadium risers are in place, as is the SunTrust Park sign atop the structure that will hold the center-field video board, making it easy to now envision what is to come.

Earl Santee, one of the stadium's lead designers and a principal at Kansas City-based architecture firm Populous, stood at the location of home plate Thursday, looked around and declared the ballpark will feel “twice as intimate as Turner Field.”

That is in part the result of having almost 10,000 fewer seats, which is in keeping with Major League Baseball's trend toward smaller stadiums, and in part because of other design factors such as the cantilevered overhangs, he said.

Many seats in the middle and upper bowls will be about 30 to 50 feet closer to the field than Braves fans are accustomed to, Santee said.

He also thinks fans will find SunTrust Park more comfortable because of the 80-feet-wide metal canopy that will overhang the stadium. Only the steel structure to support the canopy is in place at this point.

“This will be the largest canopy in baseball,” said Santee, whose firm designed 19 of the 30 current MLB stadiums. “We believe (it) will shade 60 percent of the customers that come here. … It was really an objective of the Braves that we provide that kind of shade and cover protection for as many fans as we could.”