The resort is being constructed on about 10 acres of land heavily damaged by a tornado in downtown Springfield in June 2011. 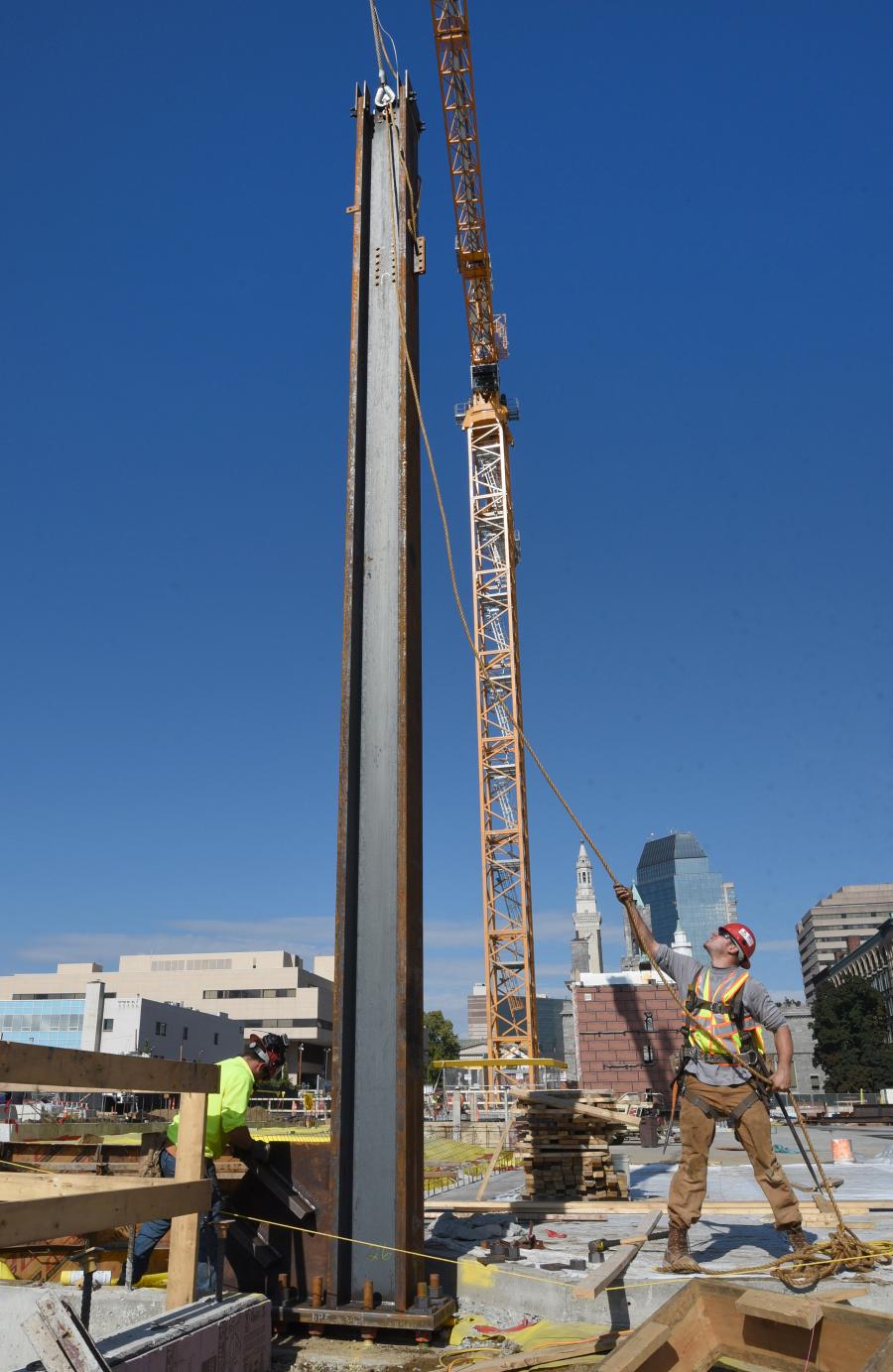 Mark M. Murray/MGM Springfield photo. Funded by MGM Resorts International, everything is currently on schedule for an expected opening in the fall of 2018.

In historic downtown Springfield, Mass., along the Connecticut River, a resort known as MGM Springfield is rapidly taking shape. It is contained within three city blocks, bordered by Union and State streets and Main Street and Columbus Avenue.

The resort is being constructed on about 10 acres of land heavily damaged by a tornado in downtown Springfield in June 2011. MGM Springfield's plan will reportedly generate approximately 3,000 direct jobs, 2,000 construction related jobs, and thousands of indirect jobs. MGM Resorts made a commitment early on that 90 percent of the jobs will be staffed by a combination of Springfield and regional residents.

The project, valued at $950 million, was awarded to Tishman/Fontaine Bros. Construction Company. Funded by MGM Resorts International, everything is currently on schedule for an expected opening in the fall of 2018. Work is occurring six days a week, sometimes 10 to 12 hours a day.

The groundbreaking was held on March 24, 2015. Guests at the event could participate by writing down their wishes for the future of the city of Springfield and western Massachusetts. The notes were then dropped into an MGM Springfield wishing well and ultimately included in a capsule that was placed in the resort foundation as construction began.

“The city of Springfield's people welcomed us into their hearts and homes and trusted us with their hopes for the future, Michael Mathis, president and chief operating officer of MGM Springfield said. “This property was designed with the input of residents who wanted more for their families and their community. Today is the day we start to realize that future as we activate the most robust construction site Springfield has ever seen.”

Unlike an inward-focused, self-contained gaming project, the shops and restaurants will be open to Main Street, allowing tourists to have easy access without having to maneuver through the gaming area or the hotel. It will offer visitors a unique experience with all the amenities of a resort, but without the confinement of moving around in a 'big box.' This design was implemented to encourage local business growth and easily link visitors to other Springfield attractions, including the MassMutual Center, museums and Symphony Hall.

According to a project spokesperson, the main challenge is that it involves “developing a $950 million resort in the heart of Springfield's downtown district while seamlessly integrating a number of existing historical buildings, through either total or partial reuse, into the project.”

The contract for a seven-level, 3,400-space parking garage was awarded to Tishman Construction, a wholly-owned subsidiary of AECOM, in partnership with Springfield-based construction manager Fontaine Bros. Inc. This portion of the project began in May, 2016, and is expected to be completed in about 20 months.

The start of construction of the parking garage followed months of site preparation and demolition work and the relocation of a church on the site. Upcoming work includes the casino podium (super structure) and hotel.

Tishman is partnering with Fontaine Bros. Inc. to manage the parking garage project, including the solicitation of subcontractors and other procurement efforts.

The church relocation was necessary to clear the land for the resort casino's construction site, and occurred in April 2016. The French Congregational Church, known since 1919 as the First Spiritualist Church is a historic high Victorian gothic church, which was located at 33-37 Bliss Street. The church was moved approximately 600 ft. (182.88 m) to its new permanent home.

“Relocating this historic church, which now sits on what will become the casino gaming floor, is a major milestone for MGM Springfield,” said Mathis. “This entire project is transforming the landscape of downtown Springfield. We are proud to be able both to preserve iconic structures and build a world-class, new facility for the community to enjoy.”

Preparation for the relocation included bracing the interior of the building, installing dolly wheels, and raising the building up on blocks.

“I am pleased that MGM Springfield and the city of Springfield are able to work together to move this mega economic development project forward, but also to preserve this historic building by saving and moving the First Spiritualist Church,” said the Hon. Domenic J. Sarno, mayor of the city of Springfield. “Pardon the pun — if you look in Merriam-Webster, this gives a new definition to 'Holy Rollers'.”

Wolfe House and Building Movers was contracted to move the historically-registered building, with great care taken to protect the framework of the 129-year-old structure. To lift the church, they used a specialized unified hydraulic jacking system that allowed the structure to be raised steadily and simultaneously, without disruption to the drywall. The building was then placed on Buckingham power and coaster dollies, an instrument Wolfe designed and built in-house. These remote-controlled hydraulic coasters speak to each other in real time through an advanced technology, allowing each movement to be carefully aligned.

The last time a crane of this size was in downtown Springfield was 30 years ago when with the construction of Monarch Place in 1986, according to Mathis.