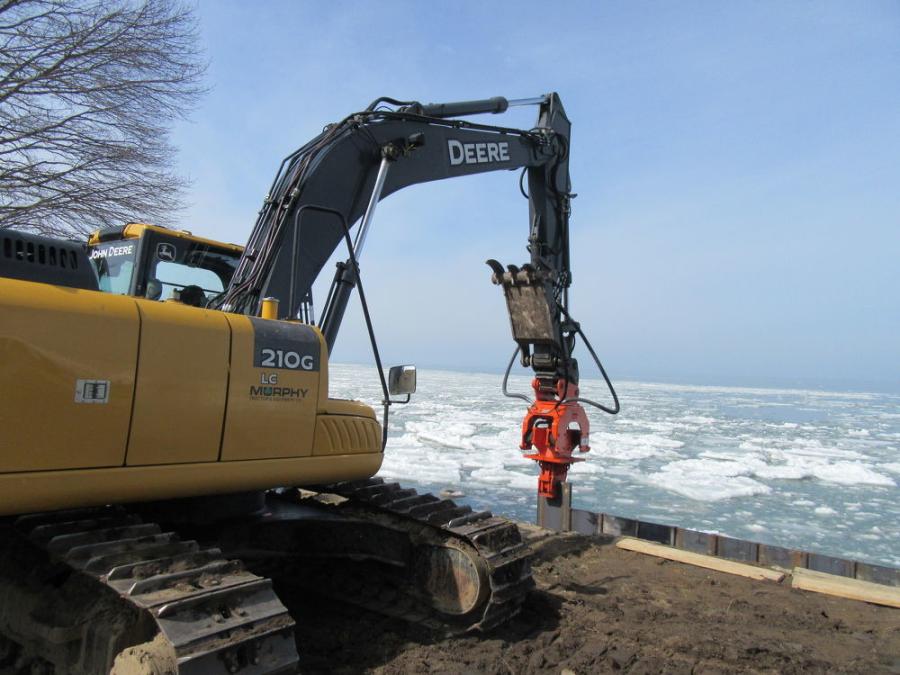 Impulse forces from the NPK C8C pile driver’s vibratory compactor liquify the foundation materials for a smooth and steady installation of the piling.

After a decades-long tenure working on virtually every major construction project in Cleveland, Ohio, long-time union member John Selwyn decided to start up his own business. In 2003, he established Arcola Building Company in Madison, Ohio. Located close to Lake Erie, the company has found no shortage of work in the immediate vicinity. Selwyn takes on projects ranging from new industrial and residential construction to home remodeling and renovation as well as property restoration projects on the shores of the lake. 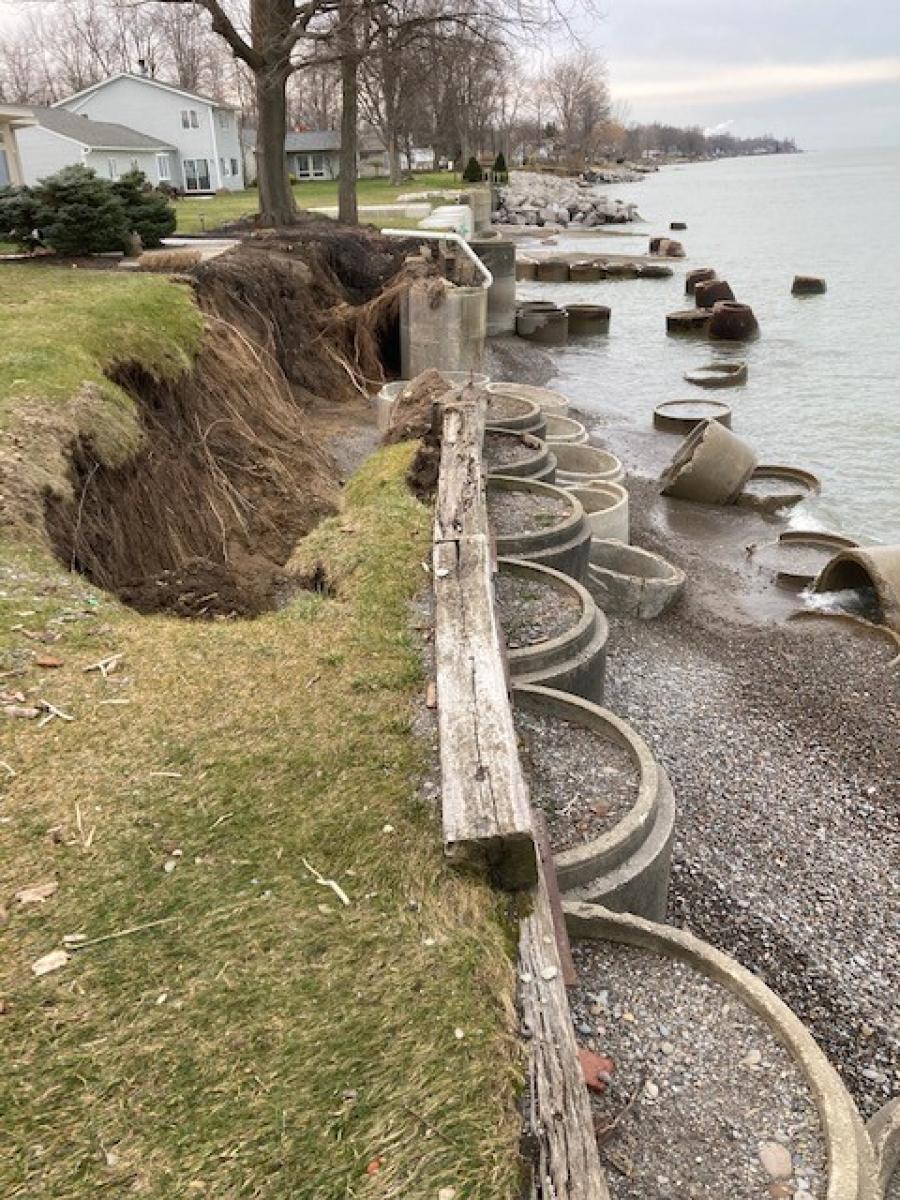 Known as one of the most turbulent of the Great Lakes due to its shallow depth, those living along Lake Erie's shore frequently face erosion issues that undermine the shoreline and threaten homes and other structures. The Ohio Department of Natural Resources (ODNR) has reported that record-high water levels, exacerbated by severe weather — including strong winds and ice movement — accelerate erosion during the winter months. The ODNR also has indicated that the problem is more common in the eastern part of the state, specifically in Lake and Ashtabula counties where the coastline is largely composed of erosion-prone cohesive clays.

Being based in Lake County, it is no coincidence that much of Arcola's recent work has focused on property restoration and preservation. Along the 40 mi. of shoreline spanning from Geneva to Euclid, Ohio, Arcola has built a solid reputation as the company to contact when erosion becomes an issue. Selwyn estimates that the company has conducted erosion control work on 40,000 to 50,000 ft. of Lake Erie shoreline since the company's founding.

Currently, Arcola is working on an emergency property restoration project in Madison. Approximately 100 ft. of the homeowner's property had washed away when the base under the existing concrete wall was undermined to a point where the wall collapsed. 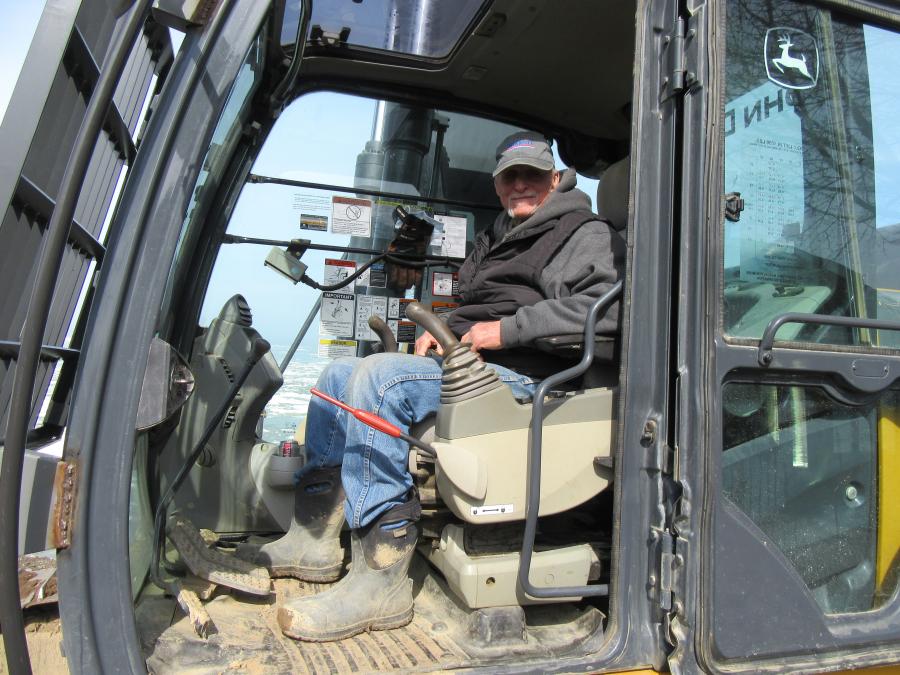 Once recovered, the barrels were reused by squaring with the owner's property line and resetting. When that aspect of the work was completed, approximately 150 tons of fill dirt were trucked in to replace the portion the land that had washed into the lake. The last step in the construction process before final landscaping involves the installation of steel pilings to create the sea wall.

Until recently, Arcola Building Company's procedure for driving the pilings required the use of two excavators: one to transport and place the piling while a second excavator, equipped with a hammer driver, drove the piling into place. Safely securing the piling to the excavator for placement was a cumbersome task and, overall, the work was both challenging and time consuming.

While measures are always taken to ensure safety, at times the work involved a limited amount of risk. For Selwyn, the safety of his crew is the number-one priority. The company has reported no lost time due to accidents throughout its time in operation and Selwyn's goal is to keep that streak going.

Selwyn's construction equipment of choice has always been John Deere. He has developed a close working relationship with the sales team of Ohio's authorized John Deere dealership, Murphy Tractor & Equipment. 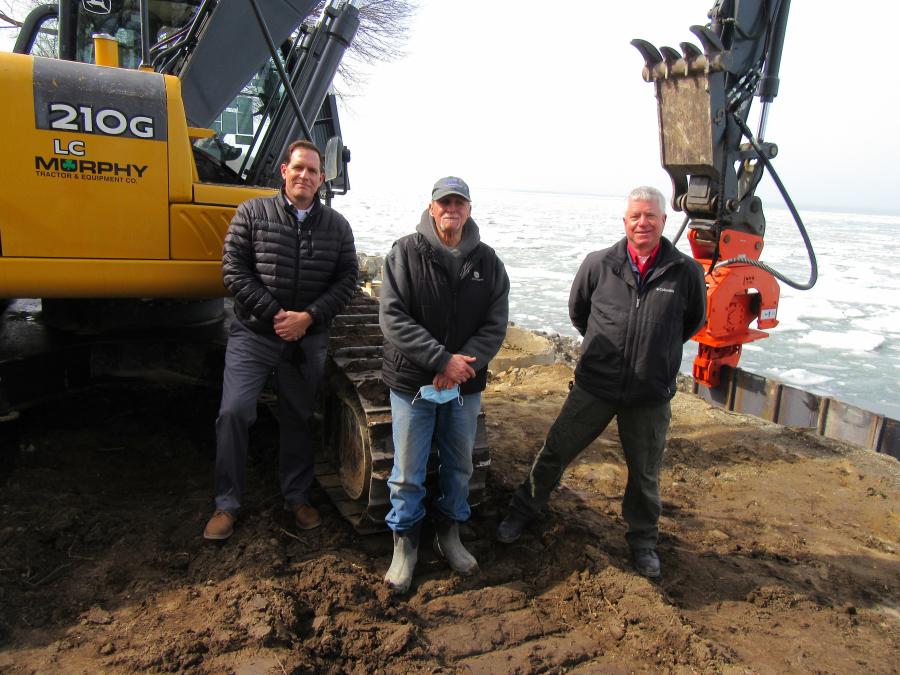 "The dealership's sales representatives and service technicians have consistently demonstrated outstanding product knowledge and have provided fast and efficient service throughout the time we've worked with them," said Selwyn. "John Deere machines are second to none."

Murphy Tractor & Equipment also is the authorized dealer of NPK Construction Products and when he was approached regarding NPK's line of pile drivers, Selwyn decided it was time to consider upgrading his process of constructing steel piling seawalls. Selwyn reviewed the line's three pile driver models, including the C-6CSD, C-8CSD and C-10CSD.

NPK's sheet pile drivers use a hydraulically-powered clamp bolted to the base of a modified vibratory compactor and are designed to drive pilings, sheeting and large diameter pipe for applications including foundation support and erosion control. The innovative design combines the high-impulse forces of NPK's original compaction models with vibration to liquify the soil. This maximizes speed and accuracy during installation. The units are engineered to direct impulse forces downward for optimal driving operation while rubber shock mounts protect the excavator boom from vibration and shock loading.

Hydraulicly operated jaws, which run on a secondary hydraulic circuit, grasp the materials to be driven or extracted, reducing or eliminating the need for spotter at the hook-up site. The pile drivers are equipped with a self-aligning swivel feature to provide greater positioning capabilities. The swivel feature also may be locked to maintain orientation of the pile driver in a fixed position. The maximum opening for the clamp jaw opening on all models is 1.5 in. and as with all boom-mounted attachments, sheeting length is limited to excavator reach.

Putting It to Work 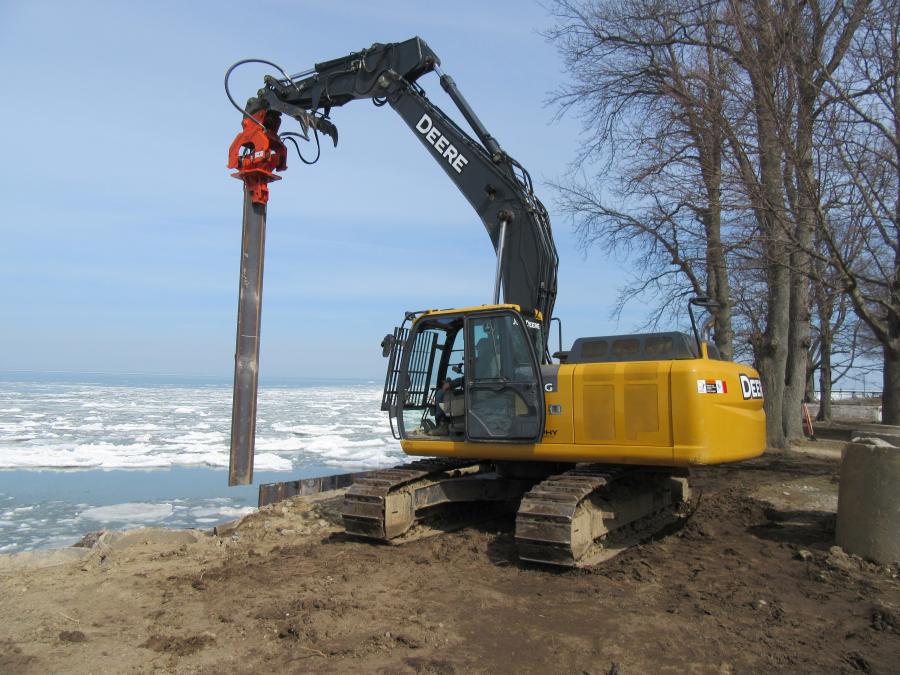 Selwyn sourced the 20-ft.-long steel pilings for the Madison property restoration and preservation project from life-long friend, Dale Nosse, owner of Mr. Weld Company Inc. The work called for the pilings to be driven 10 ft. deep with the remaining 10-ft. length forming the exposed seawall.

"The key to installing pilings is going slow and steady," said Selwyn. "If the machine is jerking, you're not working smooth."

Selwyn feels the NPK C8C pile driver is a valuable addition to the company's equipment inventory.

"The new NPK C8C sheet pile driver has increased productivity and efficiency in terms of both time and fuel economy by at least 30 percent," he said. 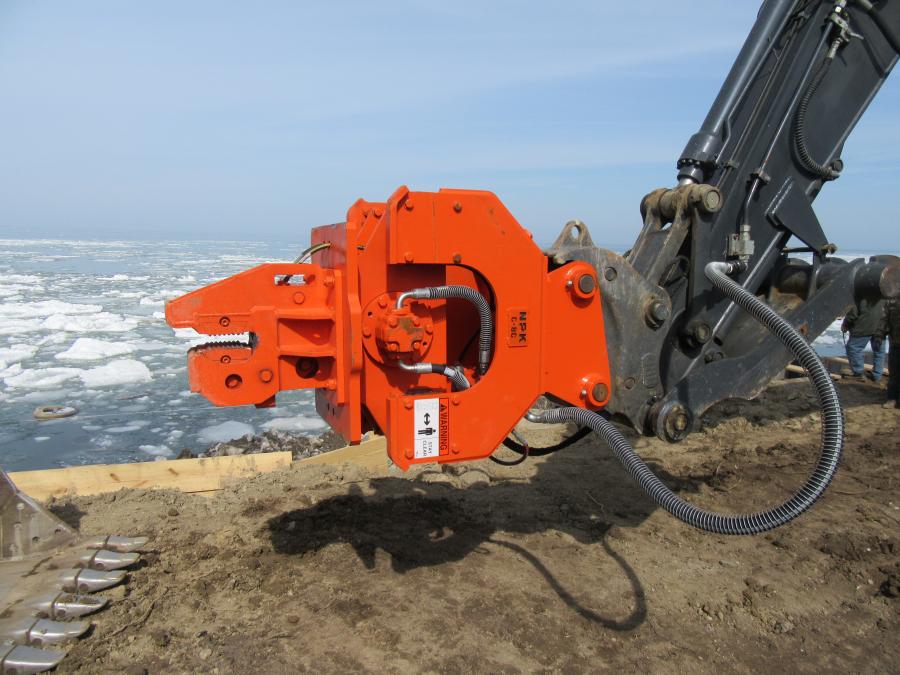 "At Murphy Tractor & Equipment, we take a partnership approach in working with our customers," said Joe Buchtinec, Murphy Tractor & Equipment territory sales manager. "We're pleased to have been in a position to introduce Arcola Building Company to new NPK technologies geared toward improving his operation and ultimately boosting his profits. NPK's Ken Skala also played a key role in the process and continues to be a valuable asset to our dealership and our customers."

"I was initially impressed with the performance and the mechanics of the NPK C8CSD pile driver, and as the job progresses, I've only become more impressed," said Selwyn. "I can say that over the years that we've worked with Murphy Tractor and Equipment, both the sales and service people have been fantastic. Along with purchasing equipment from them, we've also turned to Murphy Tractor & Equipment to rent equipment for unique applications where it wouldn't add up to purchase a machine. In those instances, there's never been a piece of equipment that they couldn't provide in a timely fashion."

He added, "NPK's Ken Skala has shown us the same level of service and interest in our business. I couldn't be more pleased." CEG