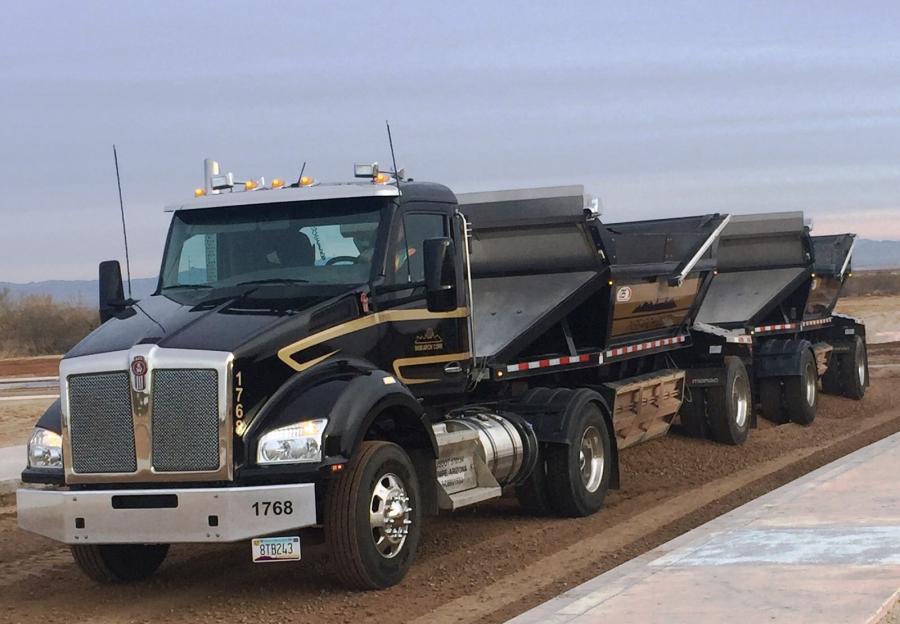 Insearch Corp. had an interesting start. The company that began life in the vending machine industry, later changed direction and has achieved success in the world of moving construction material.

Founded by Jim and Penny Beito in 1992, Insearch, based in Tempe, Ariz., was launched as a business directly tied to the vending machine industry. When vending machines were installed, Insearch would place pictures of missing children on the machines – hence the name “Insearch.”

But, Jim Beito's first love was the construction industry. He had worked for the same highway heavy construction company for 27 years and it was in his blood. So, a year later, Insearch entered into that industry. With a cell phone and pickup truck, Beito began orchestrating projects – eventually buying trucks, trailers, back-hoes and crushing equipment. The company became a major player in the Phoenix marketplace.

Insearch soon became a family affair. Jim's son, Chad, started working part-time for the company while still in high school, and daughter, Heather, soon after also joined the company. Today, Chad is the president, Heather is the company's director of sales and marketing and Chad's wife, Julia, serves as director of program management.

In recent years, Chad Beito has added new equipment, including the Kenworth T880, to augment owner-operators, who also haul for Insearch. Daily you will find upwards of 100 trucks delivering time-sensitive loads for the company, which has been in a growth mode in recent years. A September report by the Associated General Contractors of America showed that 74 percent of Arizona construction companies plan to add workers in the next 12 months. Housing permits in Arizona's Pima County are at their highest levels since 2008.

Insearch currently operates 45 pieces of equipment, which includes 36 different combinations of trucks and trailers. The most recent orders have been for the Kenworth T880 – giving the company 14 of those models. The company runs double and single belly dumps, plus has 16- and 18-wheel super dumps, which primarily haul aggregate (from boulders to gravel to dirt) to clients. The trucks were purchased through Inland Kenworth – Phoenix.

“Our drivers rave about the T880s,” said Beito. “They like the ride and the comfort, plus they're not tired at the end of their shift.”

Equipped with PACCAR engines rated at 430 hp with 1,550 lb-ft of torque, Insearch saved 400 lbs. by moving to the 10.8-liter PACCAR MX-11 engine from the 12.9-liter PACCAR MX-13. “We're running the same horsepower and torque, and our drivers don't notice a difference in performance,” Beito said. “But, we're certainly seeing the difference to our bottom line. We're primarily paid by the unit, the load or by the ton. Weight savings is critical to us and the PACCAR MX-11 is a huge new contributor. We are also extremely aware of operational costs and Kenworth is instrumental in driving them down. Since nearly all our work is bid by the unit, having a handle on costs and keeping maintenance expenses to a minimum ensures our standing in the industry.”

Helping drivers behind the wheel of the Kenworth T880s is the Eaton Fuller Advantage 10-speed and Eaton UltraShift Plus transmissions. Beito said eliminating manual shifting has been a great benefit to drivers. “Driving in the greater Phoenix area is a lot of stop-and-go,” he said. “There's physical and mental fatigue with shifting. Mental because you're trying to keep up with traffic and the physical act of shifting adds to the stress of driving. With an automatic, you just go.”

The Insearch trucks are easy to spot. They feature a black and gold paint scheme and stand out in a crowd. “They really do,” said Beito. “We get compliments all the time on our Kenworth T880s – people say, 'I see your trucks all over town.' In reality, we might have only a few running in that area, but our trucks are so unique that people notice them. They're striking and project the desired image.”

Learn more at www.kenworth.com. Kenworth is a PACCAR company.