When a path needs to be cleared to a group of Marines under heavy fire, a Cat Dozer steps into the fray. 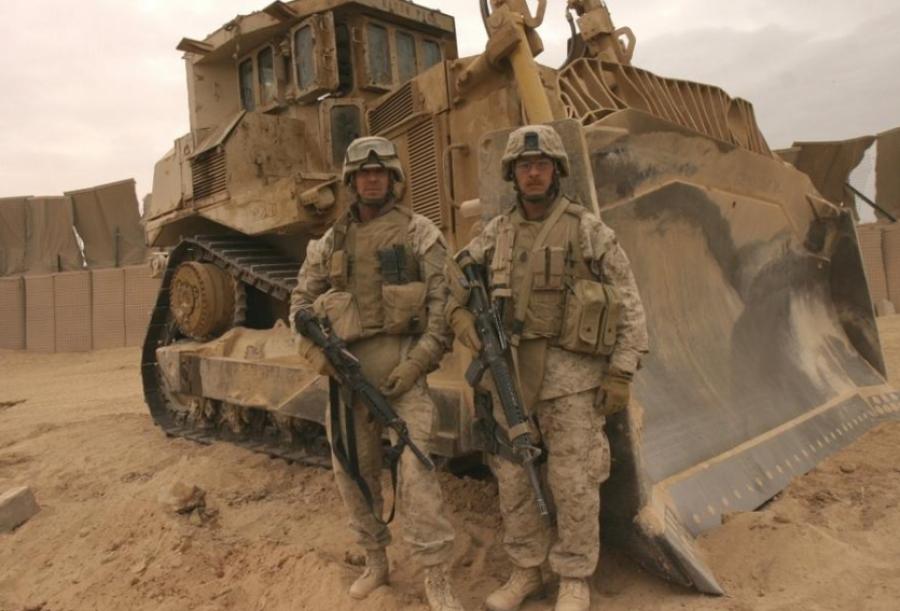 The Peoria Journal Star is reporting that Alan Clyne's Christian missionary work has taken him across the country since his retirement from the Marine Corps in July, including to central Illinois to help build spiritual sanctuaries through Church Growth Ministries.

But the 52-year-old Florida man's ties to the region reach far beyond a construction site in Macomb, connecting directly to Peoria via a serpentine stretch of rubble-strewn roadway in northern Iraq, within sight of the Syrian border.

It was there, at a tiny forward operating base called Camp Gannon in November 2005, that Chief Warrant Officer 4 Clyne and a fellow Marine, Master Sgt. Scott Witmer, hopped aboard an armored Caterpillar D9 bulldozer that neither man had been trained to operate and drove into a high-risk rescue mission in an active combat zone.

A tank accompanied them — from behind.

"We were on the Syrian border, with a bulldozer we didn't know, in a combat zone," Clyne said Wednesday during a visit to the Peoria area. "I felt like I was riding a woolly mammoth. I wasn't even intimidated by the tank. … Once we discovered we were on the behemoth, and nothing could take us down, our confidence went way up."

Before dawn that morning, the senior commanding officer at Camp Gannon asked Clyne, the commanding officer of the maintenance department with Combat Logistics Battalion 2, 2nd Marine Logistics Group (Forward), for a bulldozer and an operator to clear a path to a group of Marines pinned down by insurgents in a nearby village.

Clyne and Witmer, the maintenance detachment operations chief, technically only had a forklift to shuttle supplies — "beans, bullets and Band-Aids," Clyne said — around the base.

But the armored D9, one of the largest dozers made by Caterpillar Inc., had been left on the base after constructing berms that surrounded the encampment. Someone stenciled the phrase "EARTH PIG" above the forward windows of the cab.

Clyne knew how to work the levers of older Caterpillar D7 dozers, but not the joysticks at the helm of the D9. He had to learn quickly and adapt to an unusual situation.

"I was not supposed to be outside the perimeter," Clyne said. "We started taking fire right on the edge of town."

Clyne and Witmer later learned the path they had to clear to a group of trapped Marines was known as "IED alley," though the dozer did not hit any explosives. The backup firepower from the tank, however, was necessary.

Once the men reached their destination, they were asked to clear a few more areas in the village. By the time they returned to the spot where the Marines had been trapped, everyone had moved on or evacuated. Clyne and Witmer returned to base.

Later in his military career, at Fort Leonard Wood in Missouri, Clyne worked with the company that built that D9 to develop training for other heavy equipment operators in the Marines and U.S. Army.

He also took his first international mission trip to Honduras with the World Mission Builders branch of Church Growth Ministries. That was eight years ago, and in retirement, Clyne is now working full time for the organization, which brought him to Illinois near Caterpillar's world headquarters.

Clyne sees one profound similarity between the work of all three worlds — Caterpillar building the equipment, the military deploying it, and the church building effort that employs the skills he learned from each entity.

"In hard times, whether it's business or it's war, the only thing that's going to see you through to the sunshine the next day is perseverance," he said.