Crews under contract of the U.S. Army Corps of Engineers, Baltimore District, are currently dredging roughly 2.6 million cu. yds. of material from the Baltimore Harbor and Channels navigation project. 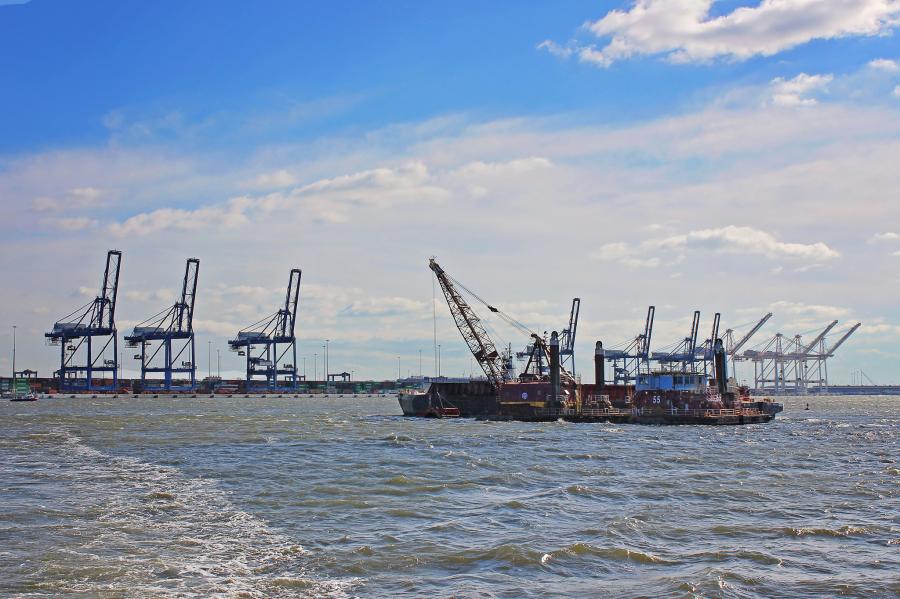 Crews under contract of the U.S. Army Corps of Engineers, Baltimore District (Md.), are currently dredging roughly 2.6 million cu. yds. (1.9 million cu m) of material from the Baltimore Harbor and Channels navigation project. The $25.6 million contract was awarded this past fall.

This dredging began the first week of March, and is reportedly being performed to ensure continued safe navigation in and out of the Port of Baltimore.

“Maintaining the shipping lanes in Baltimore Harbor and its bay channels is of critical importance to both the regional and national economy,” said Baltimore District Commander Col. Ed Chamberlayne, who, in that position, also formally serves as the Supervisor of the Harbor for Baltimore Harbor. “Whether it's vehicles, raw materials or other commodities, residents throughout the region and beyond benefit from the operations at the Port of Baltimore on a regular basis, and that's why we're committed to maintaining these channels.”

Approximately 2.63 million cu. yds. (2.01 million cu m) of material consisting primarily of mud, silt, sand, shell and mixtures thereof is being removed from the channels as part of these maintenance operations. The work, which is being done with two dredges, began with the channels above the Key Bridge and will finish with the bay channels below the Key Bridge. Maintenance dredging is expected to conclude this spring, well within the contract deadline.

The contract was awarded to Great Lakes Dredge and Dock of Oak Brook, Ill. The Corps' project manager for this project is Tiffany Burroughs.

The following channels associated with the Port of Baltimore are being dredged to their respective authorized dimensions, plus specified allowable overdepths ranging from one to two feet:

“Historically, one of the biggest challenges when it comes to maintaining the Baltimore Harbor and Channels Project is determining the best way to dispose of the dredged material,” said Chris Gardner of the Corporate Communication Office of the U.S. Army Corps of Engineers, Baltimore District. “This contract to perform dredging on four of the channels that are part of that project is no different. Working closely with our partners in the state of Maryland though, the Corps has coordinated for the safe disposal of all of the material being dredged, including the beneficial reuse of the majority of the material.”

In coordination with the state of Maryland, the roughly 2.1 million cu. yds. (1.6 million cu m) of material dredged from channels below the Key Bridge will be beneficially reused at the Paul S. Sarbanes Ecosystem Restoration Project at Poplar Island located on the eastern side of the Chesapeake Bay.

Also in coordination with the state of Maryland, the roughly 550,000 cu. yds. (420,505 cu m) of material dredged from channels above the Key Bridge will be placed at Cox Creek Dredged Material Containment Facility.

Poplar Island is a unique and extremely successful ecosystem restoration project that has provided a site to beneficially reuse millions of cubic yards of dredged material from the Baltimore Harbor and Channels Project over the years.

According to Gardner, the Port of Baltimore is ranked as the top port among all U.S. ports for handling autos and light trucks, farm machinery and construction machinery.