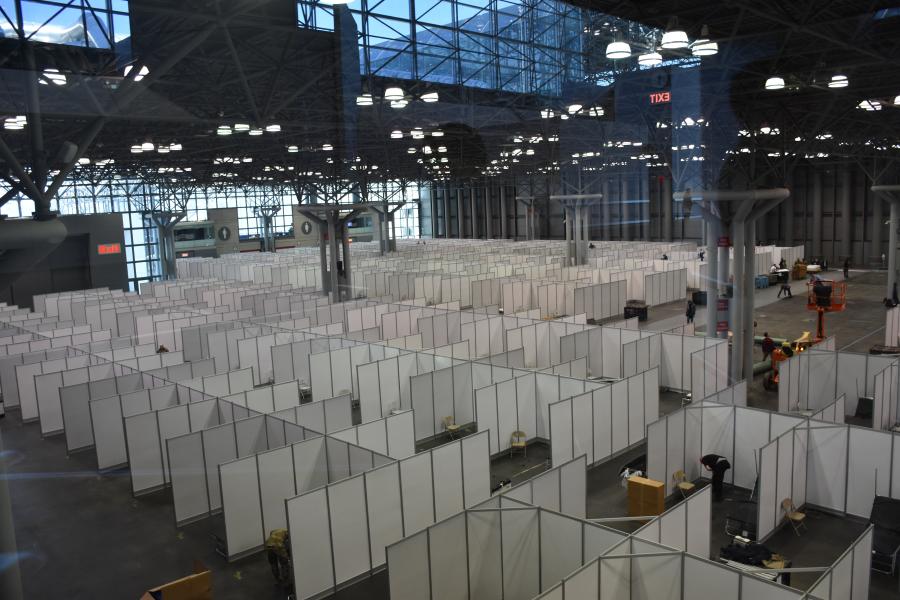 An aerial view of patient care units under construction inside the Jacob Javits Convention Center in New York City, March 27, 2020. The Javits Center site was selected, in part, due to its large expanse of open space. It is now nearly complete on two floors with close to 3,000 people already being treated.

In times of national emergencies, the U.S. Army Corps of Engineers has historically taken the point among federal agencies in providing engineering skill to important public works projects stateside, as well as to American military sites abroad.

With an existential crisis now upon the nation unlike anything since World War II, the USACE is again on the front lines, this time fighting an enemy impervious to traditional weapons. Rather, the Corps is doing battle the way it knows best: by applying strategy, planning and engineering to slow the advancing adversary.

With the COVID-19 pandemic spreading its tentacles across the United States, local, state and federal agencies like the USACE are joining with medical personnel to race ahead of the coronavirus and eradicate it as soon as possible.

It could be that this may be the Army Corps of Engineers' finest hour.

On March 6, an $8.3 billion emergency funding appropriations act was signed into law by President Trump that called for federal agencies to quicken its response to the coronavirus crisis, followed one week later by his declaration of a national state of emergency. Since then, thousands of Americans have been sickened or killed by the scourge of COVID-19.

Despite the fact the USACE primarily controls the building and maintenance of dams, canals, ports and flood control structures across the nation, the approximately 37,000 civilian and military people in its workforce are made up of engineering, design and construction management personnel — the perfect military skillsets to battle COVID-19.

Among the duties the Corps has been called on to carry out are to work with the Federal Emergency Management Agency (FEMA) to increase the healthcare capacity in states and communities where COVID-19 is causing, or likely to cause, the greatest impact.

Medical experts realized years ago that during a pandemic or other mass-casualty incident, America's health system would not be able to rely solely on the nation's hospitals to care for the population and would most likely be overwhelmed.

With COVID-19 on the loose, it falls to each of the 50 states, and many communities, to request help from FEMA and the Corps to specifically build updated or additional medical facilities that can treat the influx of both COVID-19 and non-coronavirus patients. 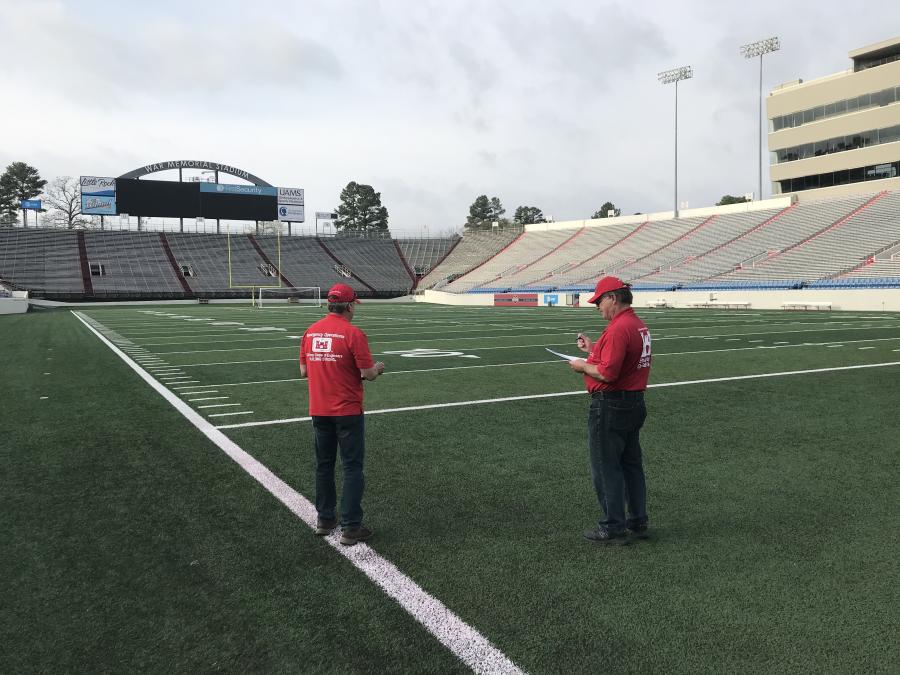 The USACE helps these governments to identify, prioritize and assess possible alternate care sites (also called alternate care facilities) to make up for shortages in local hospital bed space. Once it is decided which locations are best suited to be an ACS, USACE District personnel in those areas perform inspections to see that they meet various federal standards before reporting their findings back to the state. Corps' district engineers are then directed to quickly hire contractors for each modification or, if asked, manage the construction contract itself.

The Corps' response to the coronavirus outbreak was designed by the professionals at the USACE's Engineering and Support Center in Huntsville, Ala. Their expertise streamlined the process to modify existing facilities into temporary medical sites in just a matter of days.

As outlined by the USACE's Huntsville Emergency Operations Center, the Corps is quickly converting empty space in hotels, barracks, college dormitories, arenas and other large square-footage buildings into ICU-capable hospitals for treating COVID-19 patients. Work also is being done to add bed and treatment space in established hospitals located in areas hit hard by the coronavirus. Finally, sites are being developed to care for patients with non-COVID medical issues to allow local hospitals to concentrate on patients with coronavirus symptoms.

The adaptions of the approved sites must be done "in as little as five days and at most two weeks to align with state projected virus infection peaks," according to USACE guidelines.

Designed simply to be nothing more than reinforced cubicles, the ICU-type patient care units include room for a bed, privacy curtains, medical supplies, equipment and lighting, with nurse's stations located nearby.

But the Army's engineers also must see that precise engineering is done on each patient care unit to hold and maintain negative pressure, which confines the coronavirus within the room. Negative pressure allows for air to flow into the room but not out, so possibly infected respiratory droplets don't spread. A range of technical equipment also is needed in the treatment space, in addition to an adequate power supply. More seriously ill patients must use respirators in some alternate care units.

As of April 7, the Corps had completed more than 800 site assessments in all 50 states and in three U.S. territories. In stark contrast to that number, though, only 17 building contracts had been awarded to private contractors for ACS facilities in that time. Many more were pending in the days after, but in an unprecedented event like the COVID-19 pandemic, the USACE has had to work around the clock and at lightning speed to carry out its mission assignments.

The first ACS facilities to be built were in large cities and their surrounding communities, including New York City, Chicago, Detroit and Albuquerque, N.M., but with the number of coronavirus cases and deaths still rising, the need for more alternate care facilities has only increased.

One of the first alternative care sites to be pinpointed were in New York City and Upstate New York, identified as the East Coast epicenter of the virus. 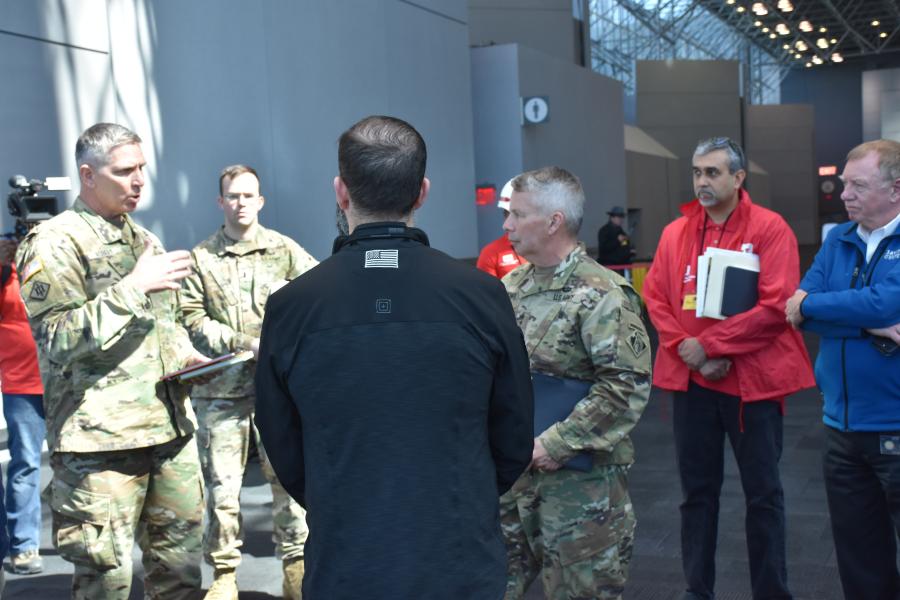 The city's initial site conversion was finished March 30 on the main showroom floor of the Jacob Javits Convention Center, near the Hudson River in midtown Manhattan. The USACE is adapting portions of the large exhibit space into medical stations made up of nearly 3,000 beds. Another level of the complex was near completion on April 7. Immediately after the first portion was built, sickened patients began arriving to the Javits Center.

Viewed from above, many units can be seen honeycombed over the thousands of square feet at the Javits Center, as well as at similar convention facilities in Chicago and Detroit. Additional units also are being built to maximize capacity to accommodate an overflow of patients, if needed. Generators, sinks and portable trailers with bathrooms and showers have all been brought to those sites by FEMA.

They faced the grim news on April 6 that the city reported almost 69,000 cases of coronavirus within its five boroughs and more than 2,700 deaths.

To help in the fight to slow those numbers, ACS treatment hospitals also are being developed in the Bronx, Brooklyn, Queens and Staten Island. The city is still determining other sites for treating non-COVID-19 patients to help alleviate the burden on hospitals tending to people infected with coronavirus.

On Chicago's lakefront, the 2.6 million sq.-ft. McCormick Place Convention Center also is undergoing an indoor transformation to accommodate a 3,000-bed alternate care facility. The massive building is the largest of its kind in North America. Like the Javits Center in New York, McCormick Place is being set up to host patients with mild symptoms who don't require intensive care, freeing up local hospital beds for more severe coronavirus cases. Rehab work in three areas of the campus was expected to take place in phases over the next couple weeks. Smaller sites are being built in the Chicagoland at two existing hospitals, as well. 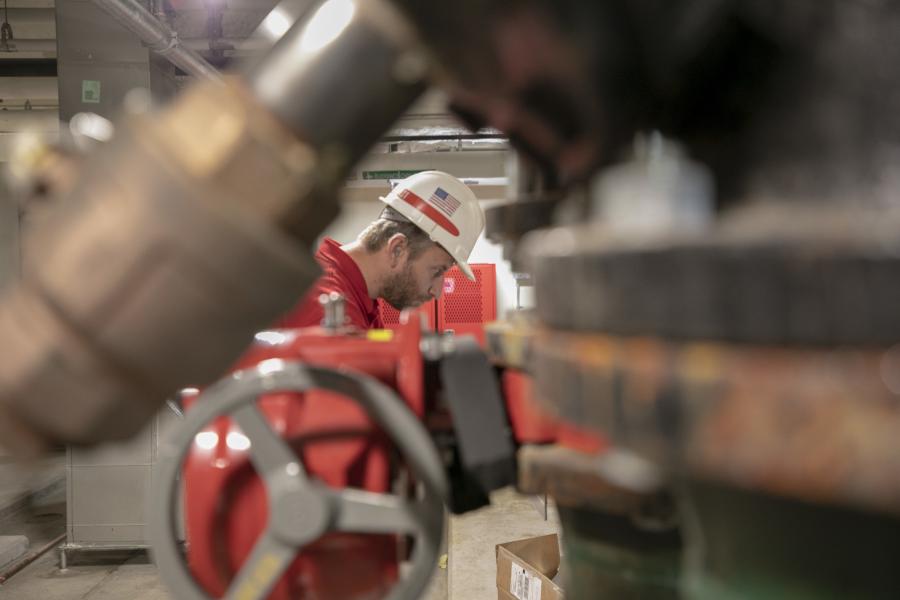 Another large facility designed to treat up to 1,000 patients in downtown Detroit's TCF Center is nearly complete, while work is ongoing to modify space into an ACS at New Mexico's Lovelace Medical Center Gibson, a government-operated acute care facility in Albuquerque.

On April 7, the USACE announced that more contracts for alternate care facilities were awarded at convention centers in Denver, Nashville, Miami, Memphis, plus hospitals in suburban areas of Detroit and Chicago. Other new sites will be developed in California, New Mexico and Virginia. The Corps expects the pace of new contracts to only increase in the coming weeks.

Overall, USACE received 27 FEMA Mission Assignments totaling approximately $1.6 billion by the first seven days of April, and the Corps has more than 15,000 personnel engaged to provide support both on site and virtually. USACE Emergency Operations Centers have also been activated at 44 locations across the agency's divisions and districts to stop the spread of the pandemic. CEG