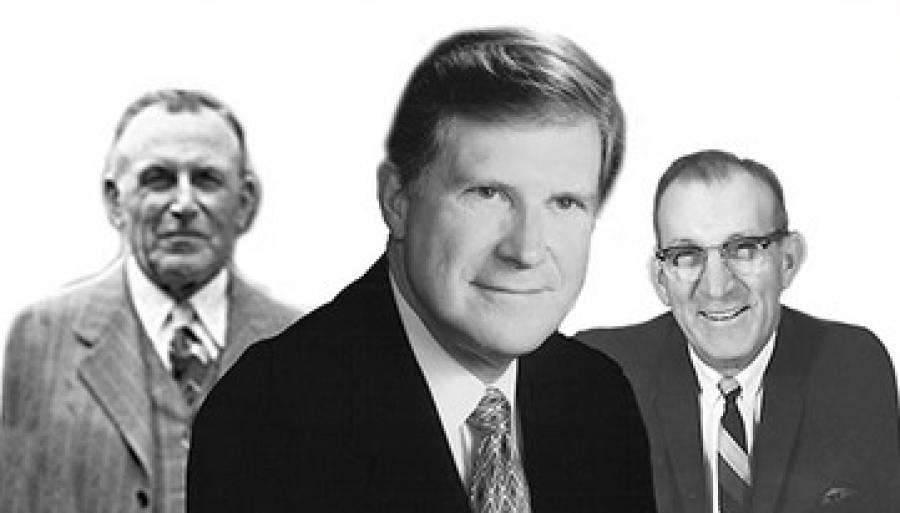 The Vecellio family, Charles F. Potts and Thomas N. Iovino are the 2018 inductees to the American Road & Transportation Builders Association (ARTBA) Foundation's Transportation Development Hall of Fame. The group was honored, along with the 2016 and 2017 class inductees, at a May 14 dinner in the Nation's Capital.

Launched in 2010, the Hall “honors individuals or families from the public and private sectors who have made extraordinary contributions to U.S. transportation development during their careers.”  Nominees are considered in two categories:

This family's story begins at the turn of the 20th century when Enrico Vecellio came to West Virginia as a masonry contractor, gaining a reputation for workmanship and integrity.  He moved on to grading and building roads, and out of this early start grew one of America's premier contracting, mining and engineering businesses, operating throughout the mid-Atlantic, southeastern United States and beyond.

Leo Vecellio Jr. grew up in the family business and joined it full time in the 1970s.  He extended its reach in the southeastern United States through a series of acquisitions, start-ups and expansions.  He also diversified into aggregates production and energy services.  Today, under the corporate umbrella, based in West Palm Beach, Fla., are: The Vecellio Group, Vecellio & Grogan, Ranger Construction Industries, Sharpe Bros., White Rock Quarries, Vecenergy and Hal Jones Contractor.

Leo Jr. and wife, Kathryn brought their sons, Christopher and Michael, into the business after the two completed graduate school.  They joined the executive team in 2002; becoming the fourth generation of family leaders.

Charlie Potts, a native of Winston-Salem, N.C., has a distinguished career spanning more than 45 years in the public and private sectors of the transportation design and construction industry.  He was elected chairman of the board of five construction or asphalt-related groups, and led a one-night, $500,000 fundraising event that established a legacy program known as the Dr. Don Brock TransOvation Workshop.

Potts, the chairman of the board of Indianapolis-based Heritage Construction & Materials, is a recognized expert in the field of hot mixed asphalt materials and construction, and the author or co-author of more than 100 technical papers on the subjects.  He was Heritage CEO for 10 years.  Earlier, he spent nearly two decades as a senior vice president of Ashland Inc. and president of APAC Inc., Ashland's highway construction contracting arm.  Prior to APAC, Potts worked for the Florida Department of Transportation for 16 years, serving in numerous positions including as head of the state's materials and research program and its director of construction.

He is a former chairman of ARTBA, the National Asphalt Pavement Association (NAPA), and National Center for Asphalt Technology at Auburn University; past president of the Association of Asphalt Paving Technologists; past chairman of the board for the International Center for Aggregates Research at the University of Texas; and a member of several Transportation Research Board Committees and Federal Highway Administration technical working groups.

As ARTBA chairman and in his role as Heritage CEO, he spent many years as an eloquent national advocate articulating the need for a new transportation vision — dubbed “Critical Commerce Corridors” — to improve the safe and efficient movement of goods.

In 2012, Potts led the fundraising outreach for a dinner in Memphis to honor and recognize the lifetime innovations and achievements of Astec Industries Founder Don Brock.  The net proceeds were used to establish a fund to support future TransOvation activities.  The name plays off the meanings of three words — “transportation,” “innovation” and “ovation.”  Today, the Dr. Don Brock TransOvation Workshop is an annual interactive learning event that fosters innovative thinking from the business community and transportation design and construction industry.

Tom Iovino built one of the nation's largest transportation contracting businesses, established a foundation that is changing lives in Haiti, and served as a distinguished national and local construction volunteer leader along the way.

In 1981, he founded Judlau Contracting in the basement of a home on Long Island, N.Y.  It started with small sewer and water main contracts, and within 15 years, revenues reached $50 million.  It would continue to grow and become one of the nation's leading civil construction companies.  Judlau, in which OHL Group acquired a controlling interest in 2010, completed more than $3.5 billion in projects for New York's Metropolitan Transit Authority, including the transformative Second Avenue Subway Line and several post-Hurricane Sandy rehabilitation projects.  Iovino retired in summer 2017 as chief executive officer of OHL North America.

Iovino put equal energy into his philanthropic efforts.  In 2002, he founded the Iovino Family Foundation with a commitment of “empowering families in rural Haiti to create their own pathway out of poverty.”  The foundation works to improve and enable the health and well-being of families living in farming regions in Northern Haiti through the development and support of sustainable solutions aimed at poverty alleviation, education and economic development.  The Haitian Pride Breakfast Program serves more than 2,800 children at 15 schools, five days a week during the course of the school year, many of whom would otherwise start their day without a nutritious meal.