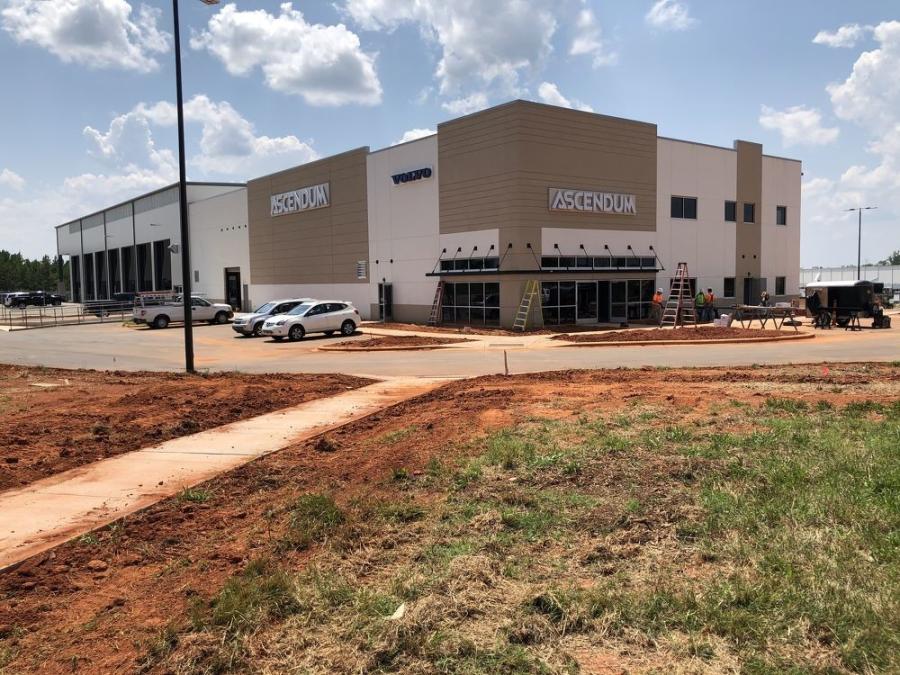 When finished in the fall, the new Charlotte branch will replace the current Ascendum dealership and service center on Reames Road.

In 60 years, Charlotte-based Ascendum Machinery has established itself among the country's best full-service dealers of top-brand construction equipment.

The company is not only the exclusive distributor of Volvo Construction Equipment, but it employs a highly dedicated and knowledgeable staff committed to maximum uptime, quality service and parts availability. 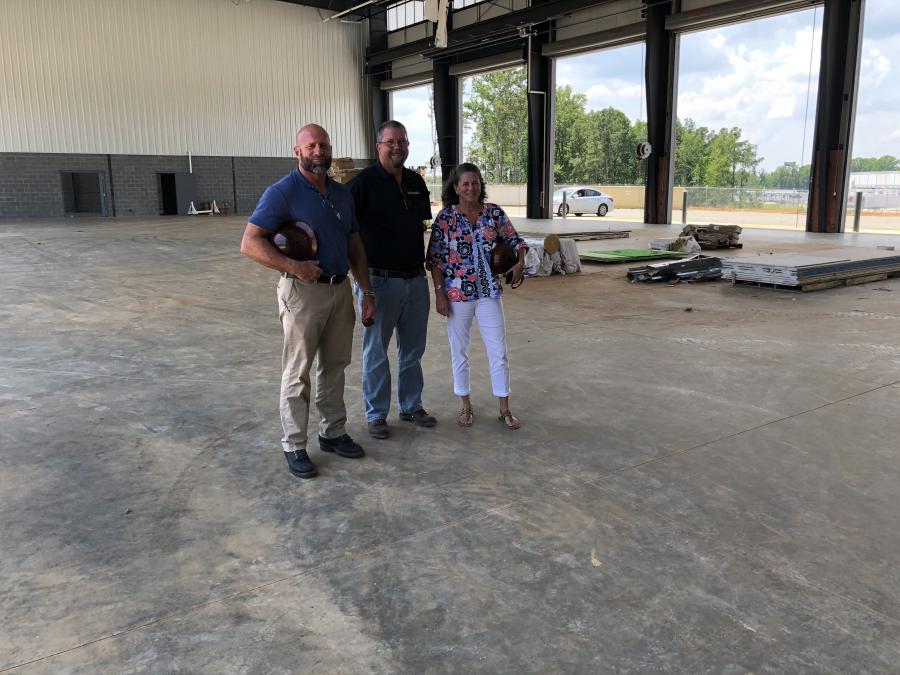 However, Ascendum has never been a company that prefers to remain static. Rather, it has overseen an aggressive expansion plan over the years to where it currently has 12 locations spread across North Carolina, South Carolina, Georgia and eastern Tennessee. In addition, Ascendum maintains three dealerships in North Dakota after opening its first address there in 2013.

Its success has recently led Ascendum to build a full-service branch and laydown yard on 12½ acres just north of Charlotte in Cabarrus County. The two-story building is located off Interstate 85 in Concord at 1025 International Dr. NW, easily accessible via Exit 55.

When finished in the fall, the new Charlotte branch will replace the current Ascendum dealership and service center on Reames Road.

Patrick Overstreet, Ascendum's director of service operations and project manager for the construction site, said the reasons for constructing the new facility were many, chief among them was to offer customers and employees a better, spacious and more up to date service center.

"Frankly, we have outgrown our older facility," he said. "The new 33,000-square-foot building more than doubles our capacity and provides us with more state-of-the-art technology. The previous branch stifled how much we could grow, and this new facility helps redefine that for us. It resets the horizon on staffing, how many people we can hire, how we better utilize space, cranes and other equipment. Plus, it's a better, cleaner fit for Ascendum and will help us grow more with the Charlotte area."

The Concord dealership also will be the largest Ascendum location in North America, Overstreet added.

The downstairs half of the facility includes both Ascendum's equipment service center and offices for the dealership's regional general manager, operations manager and service and parts operations personnel.

The second floor will have more office space, plus a technical training center where Ascendum will employ a permanent on-site trainer, as well as an office for support staff.

The equipment service capacity of Ascendum's Concord facility is its most impressive feature. 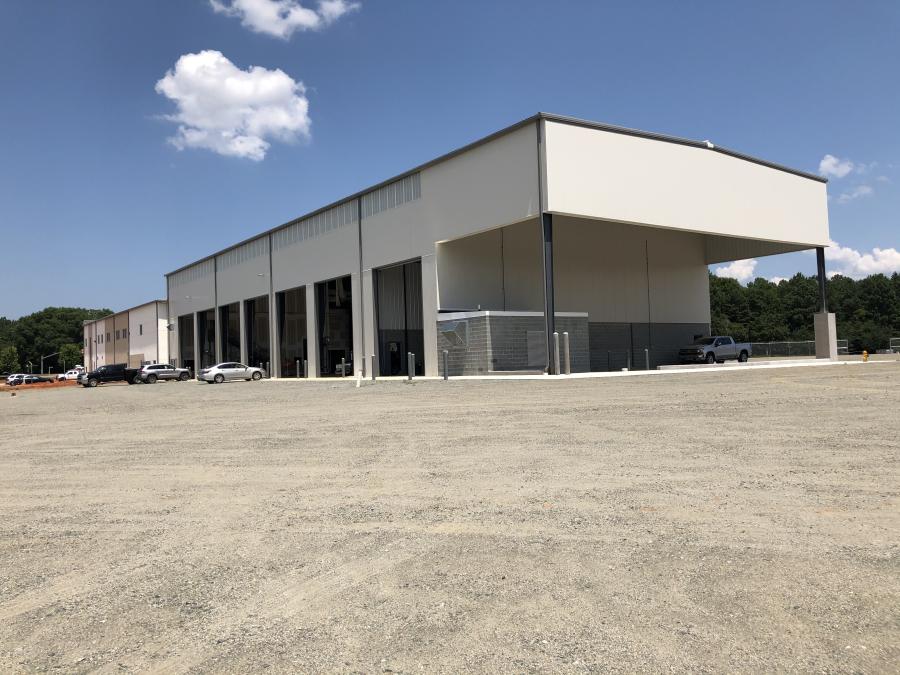 "We have seven pass-through bays, so we could fit two of our largest articulated trucks nose to nose in each one and still be able to lock down the doors," Overstreet said. "It's an abundant amount of space in comparison to what we have been using. The ability to fully utilize each bay was important, like keeping the hook heights of our cranes high enough so that we can also cycle, or raise, the bed while it is under cover. Our last bay, which is a blocked off separate space, will be a pressurized, or conditioned, space in the rebuild center, which we plan to grow to handle components, remanufactures, final-drive differentials and engines, and it will have its own small, five-ton crane operating in that space."

He explained that the new Ascendum facility's rebuild center also will be equipped with parts pressure washers, agitating washers that allow technicians to take down an entire planetary transmission, for instance, hang it on a series of handles, known as a tree, and wash the entire unit within two hours. The clean room will be in the pressurized rebuild center to keep dust out of the operation.

"In our first-floor storefront, instead of having one long contiguous parts counter, we are incorporating four kiosks, or stations, where customer can come in and speak to a representative," Overstreet said. "We can orient the desks in a chevron pattern, utilizing a V-shaped design. Three of them will be at barstool height, 46 to 48 inches high, with an ADA-compliant desk for customers with disabilities."

He explained that Ascendum had two priorities in the choosing and building of the company's flagship branch. First, it wanted to understand where its customers are located and how the dealership could better serve them from the new facility. Second, Overstreet said Ascendum was interested in learning the proximity of its employee's homes to any potential new branch location so a site could be chosen that would be as convenient for them as possible.

"We also wanted to focus on how to make our team members feel comfortable and enjoy where they work," he explained from a beautiful and completed employee break room, featuring an exterior wall made of paneled glass.

In addition, connecting the building to the laydown yard is a concrete sidewalk that Overstreet said would be covered with an awning, plus nearby picnic tables and chairs for employees and technicians to enjoy their lunch if they prefer eating outside.

Besides the site selection, Ascendum is pleased with how it will be utilized, he said.

"There is more space for a laydown yard, and the stormwater control measures are state-of-the-art to contain any contamination," Overstreet added. "Our dedication to the environment here in Cabarrus County and North Carolina is high in that we have looked for ways to be more eco-friendly and a better neighbor to others in the area.

"The facility's flow of traffic and the details about how we bring equipment in and out of the yard is something we are proud of, too," he added. "We thought through everything before we started breaking ground at the site."

SC Hondros & Associates Inc. in Charlotte was tabbed as the general contractor for Ascendum's new Queen City branch. The prefabricated steel building was designed and made by Nucor Steel.

Ascendum Machinery has North Carolina branch locations in Charlotte, Raleigh, Asheville and Greenville. In South Carolina, its dealerships are in Columbia, Charleston and Piedmont. The Tennessee branches can be found in Knoxville and Chattanooga, while Ascendum's Georgia locations are in Savannah, Macon and Buford. In the upper Midwest, Ascendum maintains North Dakota dealerships in Bismarck, Fargo and Williston.